Police in Devon are investigating a mysterious bright object spotted falling across the night sky over the south coast.

Two ‘fireballs’ sparked several 999 calls, with witnesses suspecting there could have been a plane crash.

Plymouth police reached out to the public to try and establish the cause, questioning whether it might have been asteroids breaking up in the atmosphere.

‘Did anybody else see two glowing objects falling southwesterly direction out towards Plymouth sound? I know I have been up all night, but that was odd. Asteroid?’ the force tweeted. 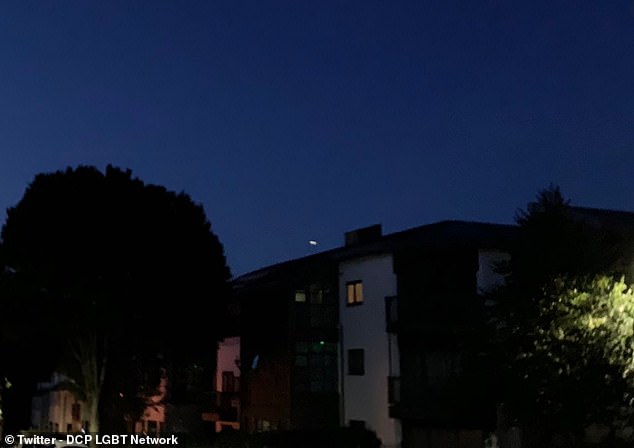 Plymouth police reached out to the public to attempt to identify a mysterious bright object spotted falling across the night sky over the south coast, questioning whether it might have been asteroids breaking up in the atmosphere

Another officer responded with a picture they managed to take of the bright light at around 5.52am this morning.

The Force Incident Manager for Devon and Cornwall Police said: ‘We have had further reports of seeing an object in the sky from some distance away with a trajectory towards the ground, with an item falling off it at some point.

‘There have been reports it broke into two and this has come from numerous people.

‘We’ve got two aircrafts in the air looking and doing aerial searches of the area. At the moment we are saying it is the Yelverton/Tavistock/Prince Town area.’

Sightings were also reported across the South Coast of England, London and Wales in the minutes before 6am.

In a further update, officers in Devon have ruled out the possibility of a plane crash due to a lack of debris, suggesting it was more likely a meteor shower.

Insp John Shuttleworth said: ‘We are as satisfied as we can be that this has not been a light aircraft crash and no persons have been injured.

‘The expert opinion of trained search officers is that if there had been an aircraft crash, assets in the air would have seen some debris.

‘There have also been a couple of reports from the Cardiff and Dorset areas of people watching meteor showers across the South West.’