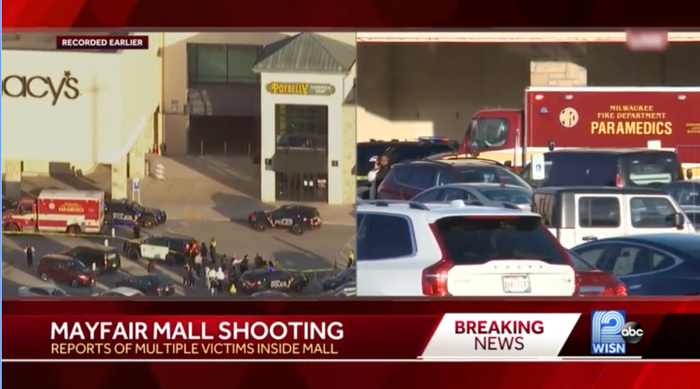 Police responded to reports of shots fired at the Mayfair Mall in Wauwatosa, Wisconsin, on Friday, according to local news media. Initial reports indicate at least six people were injured and taken to local hospitals.

Authorities from several law-enforcement agencies have surrounded the mall, which is in Milwaukee County, according to WISN-TV.

Shoppers told the station they heard between 8 to 12 gunshots around 3 p.m. before they escaped the building.  Some employees and shoppers remained trapped in the mall, while the shooter is at-large.

Becky Clark told WISN her friend who works at Macy's was hiding with her colleagues waiting to be rescued.

"They're right now hiding in the stock room" Becky Clark told the station. "They're just hiding, they don't know what's going on. They know that multiple people have been carried out."

The local medical examiner's office tweeted that they were not responding to the scene, an indication that there have been no reported fatalities on site.

Wauwatosa was a site of protests last month after the District Attorney had refused to issue charges against local Police Officer Joseph Mensah for the fatal shooting of 17-year-old Alvin Cole at the Mayfair Mall.

The police department announced at 3 p.m. that Mensah had resigned from the department.

A Trump rally is scheduled for tomorrow in Wauwatosa, according to WDJT-TV.

This is a breaking story and will be updated.