A PILOT and his wife have died in a horror helicopter crash as their children were pulled alive from the wreckage.

The aircraft spiralled out of control and crashed on a rocky beach near the the Kekerengu River in northeastern New Zealand. 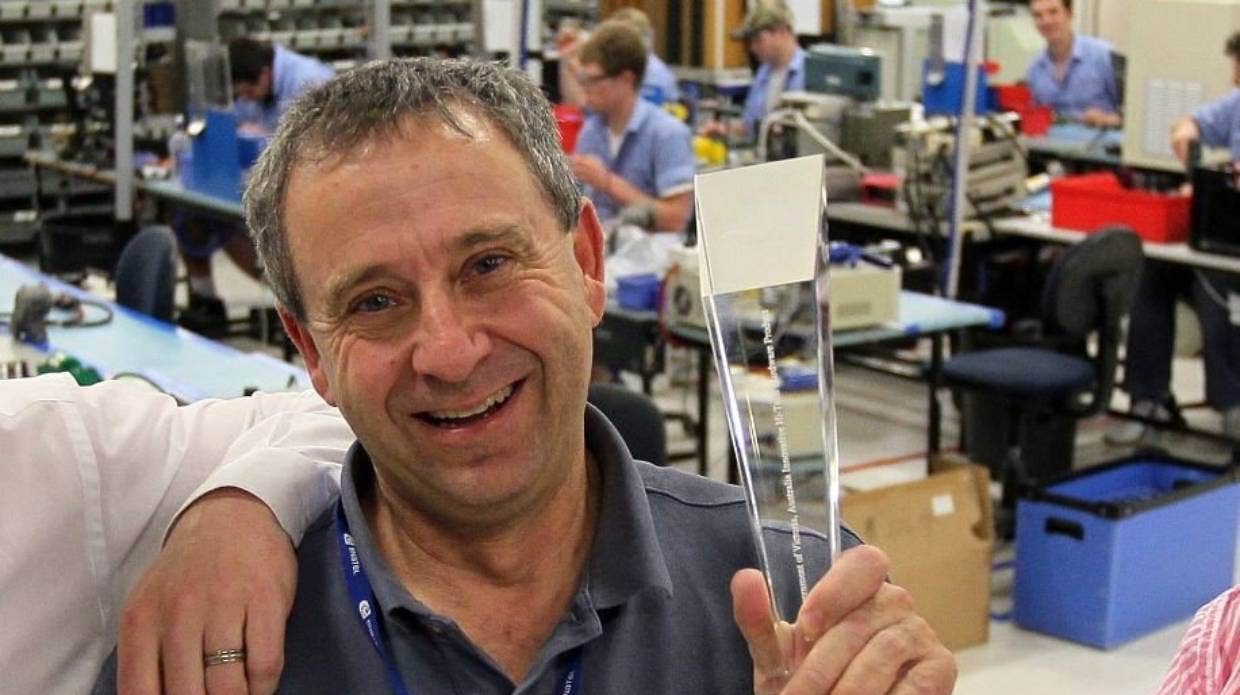 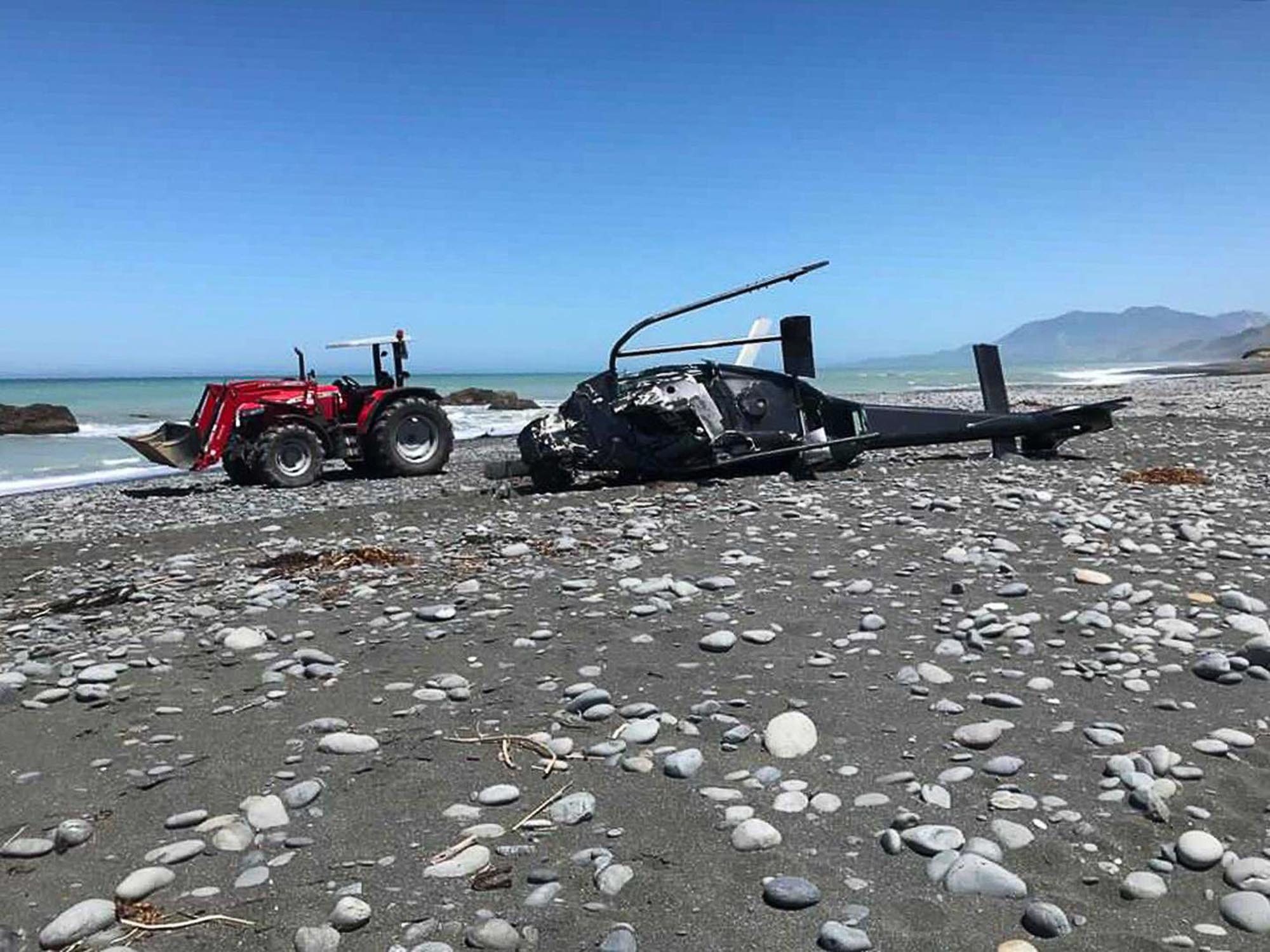 The pilot was taking his family for lunch when the incident happened around 12.40pm on Tuesday.

Their two young children and a third child survived the crash, but were seriously injured.

The three children were airlifted to Wellington Hospital where they are being treated for their injuries.

A relative said: “It’s come as such a shock … the children have been left without parents.”

It is believed the group was flying to The Store – a popular restaurant at Kekerengu – for lunch.

First responders ripped off the front window to free the survivors, fearing it would catch fire.

Mr Davidson, who according to his LinkedIn profile was the general manager at Enatel Motive Power, incorporated helicopter charter company Glenloch Helicopters Limited on September 28. 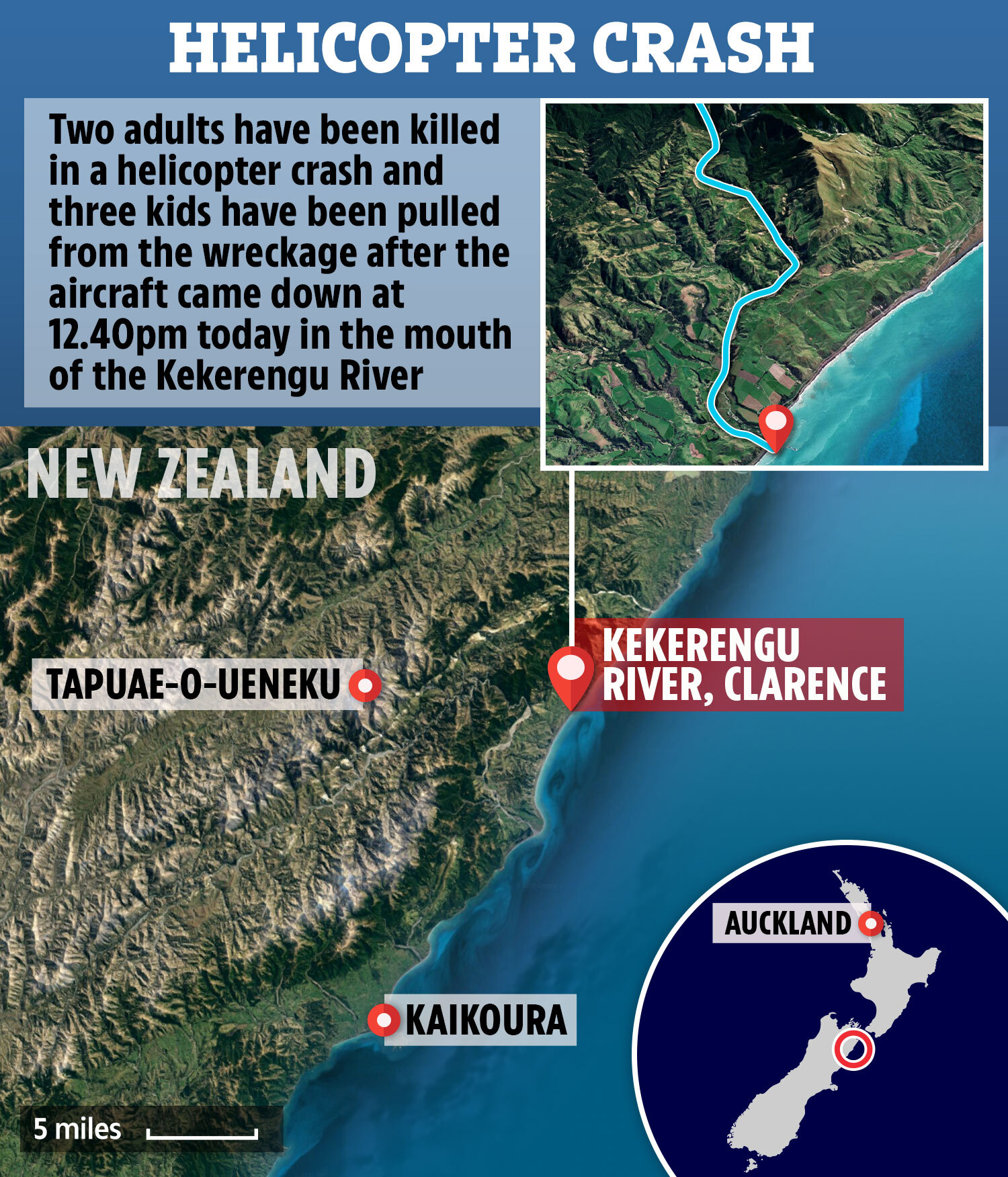 The couple also ran a bed and breakfast from their lifestyle section in Ohoka in North Canterbury.

The Transport Accident Investigation Commission (TAIC) has opened an inquiry into the crash.

The commission said the circumstances reported to date were that the Airbus Helicopter EC120 was travelling from Christchurch with five people on board when it lost control close to the beach.

Kekerengu resident Ian Mehrtens said when he first spotted the helicopter from his lodge, it looked like it was coming in to land.

“It all happened so quick … it looked normal and then it just started to spiral,” he said.

“It just got out of control so quickly.”

Mehrtens rushed to the scene across the road on a quad bike and said about four or five members of the public were already there.

The front window was pulled off to free the survivors of the crash.

Mr Mehrtens said he carried a young girl out of the wreckage.

The other children rescued were a young boy and another girl, possibly in her teens.

“There was nothing you could do except get them [passengers] out of there,” he said.

“Especially because there’s a chance [the helicopter] could catch on fire.

“We were lucky there was a tall guy down there helping. He was able to reach over and grab the passengers.”

Another witness said the crash happened “out of the blue” and was “awful, just terrible”, the New Zealand Herald reports. 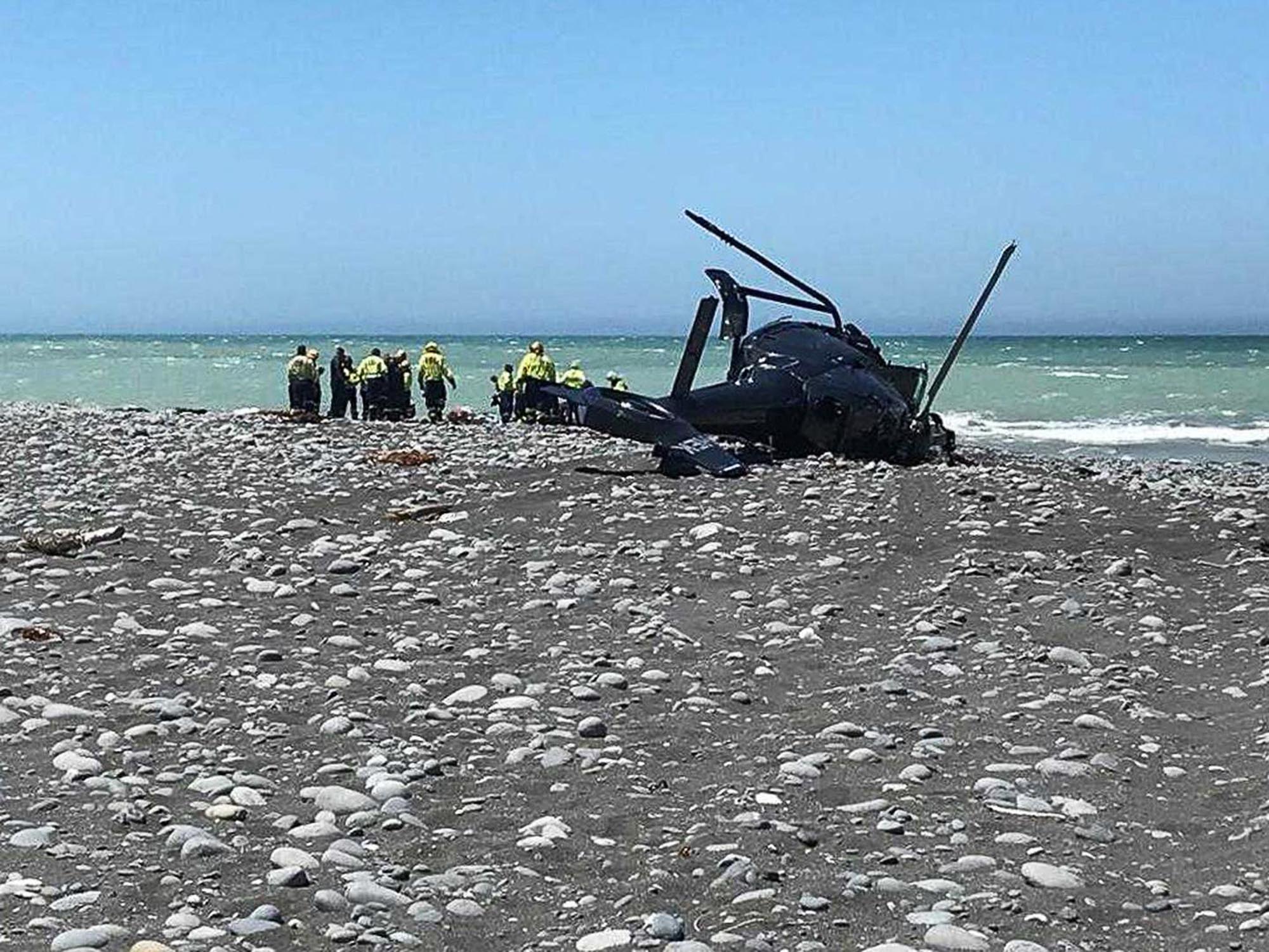 The helicopter was just in the sea, which was at low tide at the time.

A tractor dragged the helicopter out of the water, Mr Mehrtens said.

A TAIC investigation team is scheduled to be onsite Wednesday.

Chief investigator of accidents Harald Hendel said: “Their initial work will include inspecting the wreckage, mapping the site, and talking with witnesses.

“Further evidence gathering in coming weeks and months will likely include examining the helicopter’s components, seeking any recorded data from the helicopter’s electronics, and obtaining maintenance records.” 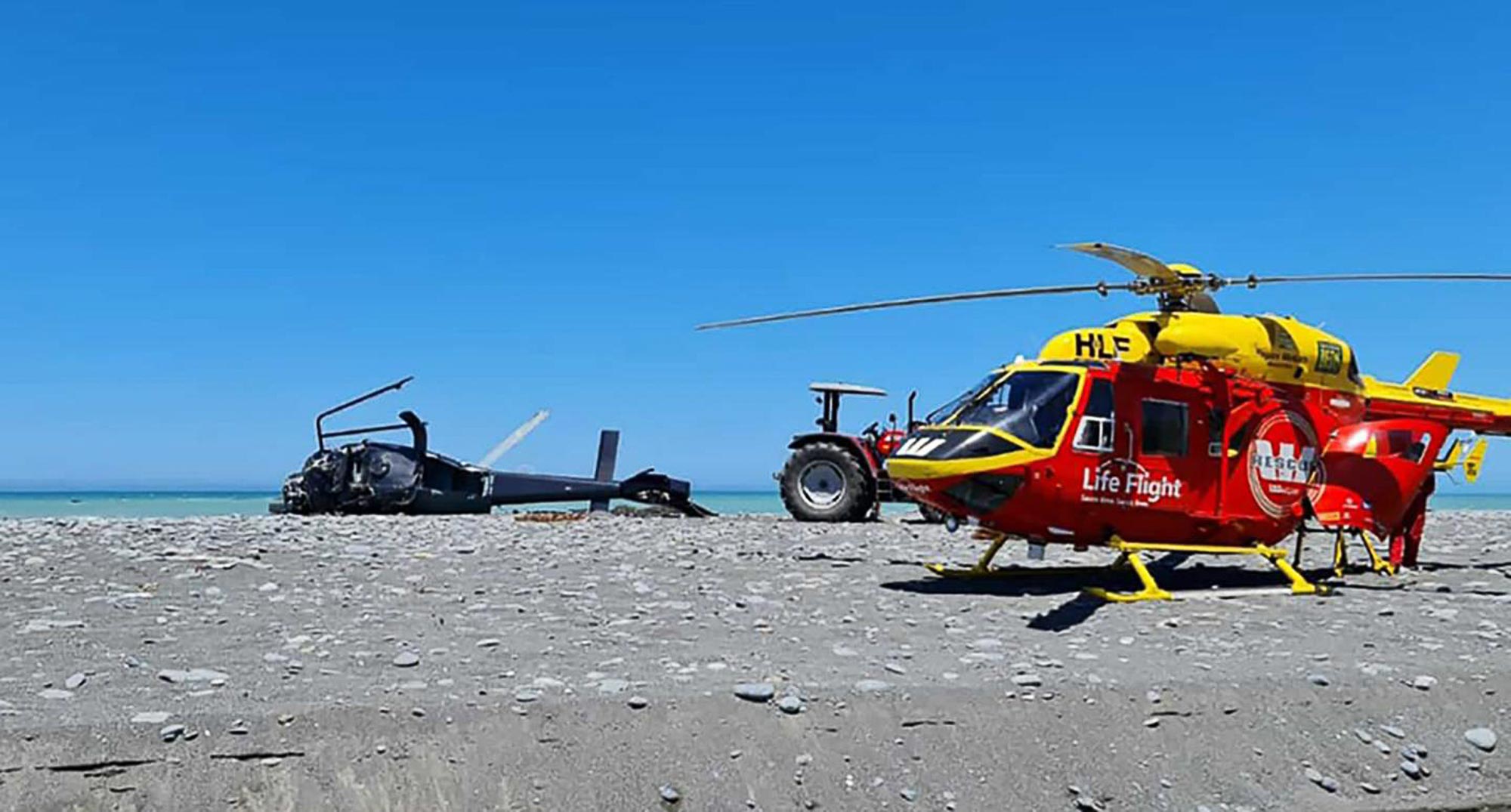 There may be people who saw what happened, given the location of the accident adjacent to a busy café on State Highway 1, he said.

He added: “TAIC is appealing for any witnesses – especially anyone who may have captured the accident on their vehicle’s dash-cam or other recording device – to please contact TAIC as soon as possible.”

Three helicopters were called to the scene of the crash, one each from Christchurch, Nelson and Wellington, along with the fire brigade, police and ambulance services.

Darryl Papesch, from Fire and Emergency New Zealand’s (Fenz) national headquarters, happened to be in the area at the time.

“We were at the fire station just up the road when we received the call out,” Mr Papesch said.

“We had [fire] services from Kaikōura and Seddon, so we had about 16 to 20 people here.”

The volunteers and members of the community did a good job with the “chaotic situation”, he added. 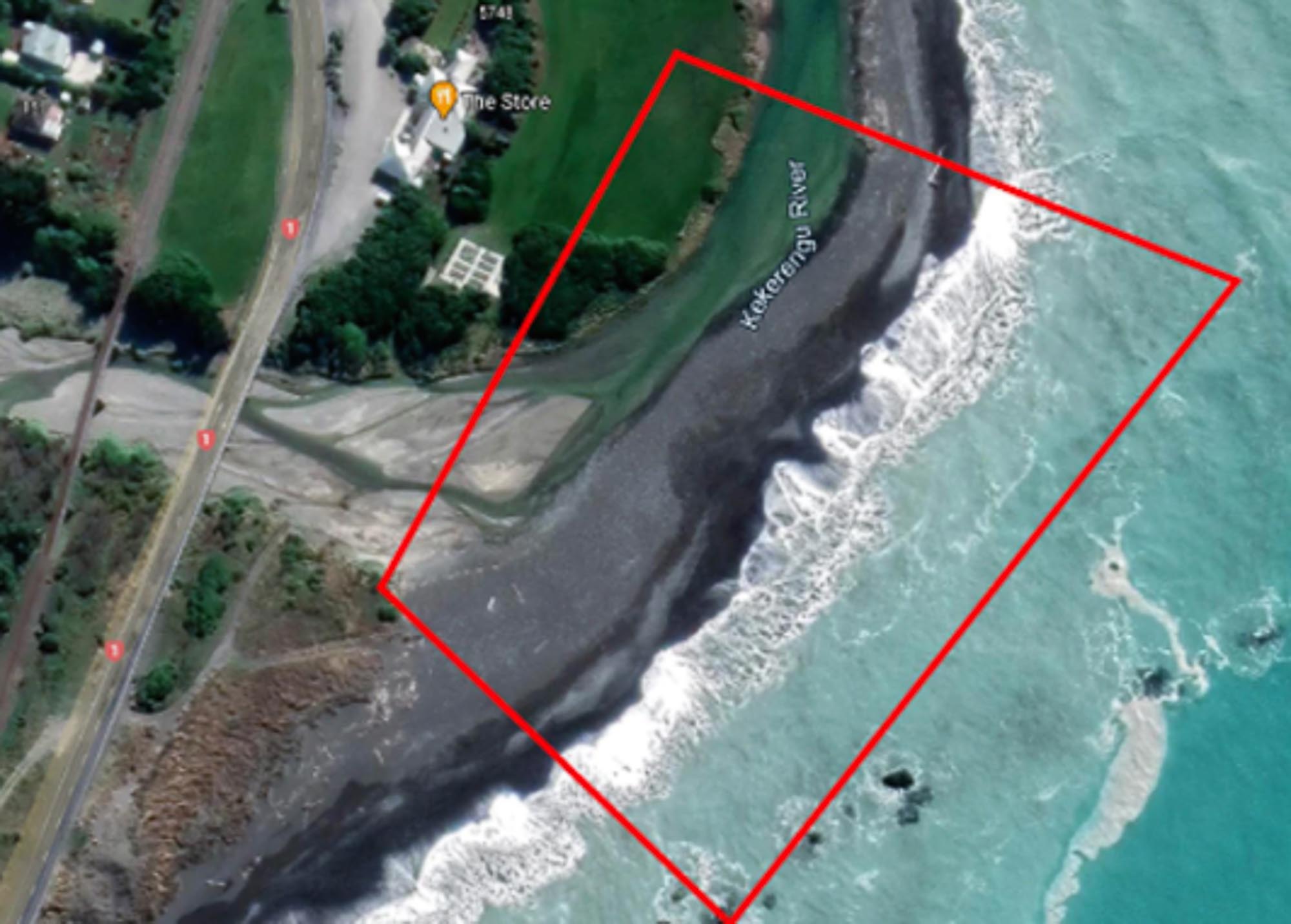