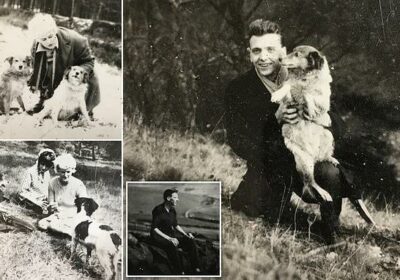 At first glance, they are images that just show a couple enjoying life in the idyllic British countryside.

One reveals a smiling young man holding his dog aloft, another shows a woman sitting on a blanket with her two pets.

But these previously unseen photos are the chilling holiday snaps of Moors Murderers Ian Brady and Myra Hindley that were taken between 1950 and 1965 – the year they were arrested for their horrific crimes.

They then buried their bodies on Saddleworth Moor in the Peak District. Keith’s body is the only one of the murderers’ victims that has still not been found.

After Hindley’s death in 2002, Brady – who became England and Wales’ longest-serving prisoner after spending 55 years behind bars – refused to disclose the location of Bennett’s body for decades until his death in 2017.

The new images have been published for the first time in a new book by author Chris Cook, who got the Home Office to release them under the Freedom of Information Act. He now hopes to solve the mystery of where Keith’s body is.

Mr Cook said the images were critical in allowing police to find the bodies of their victims, against the wishes of the notorious killers. 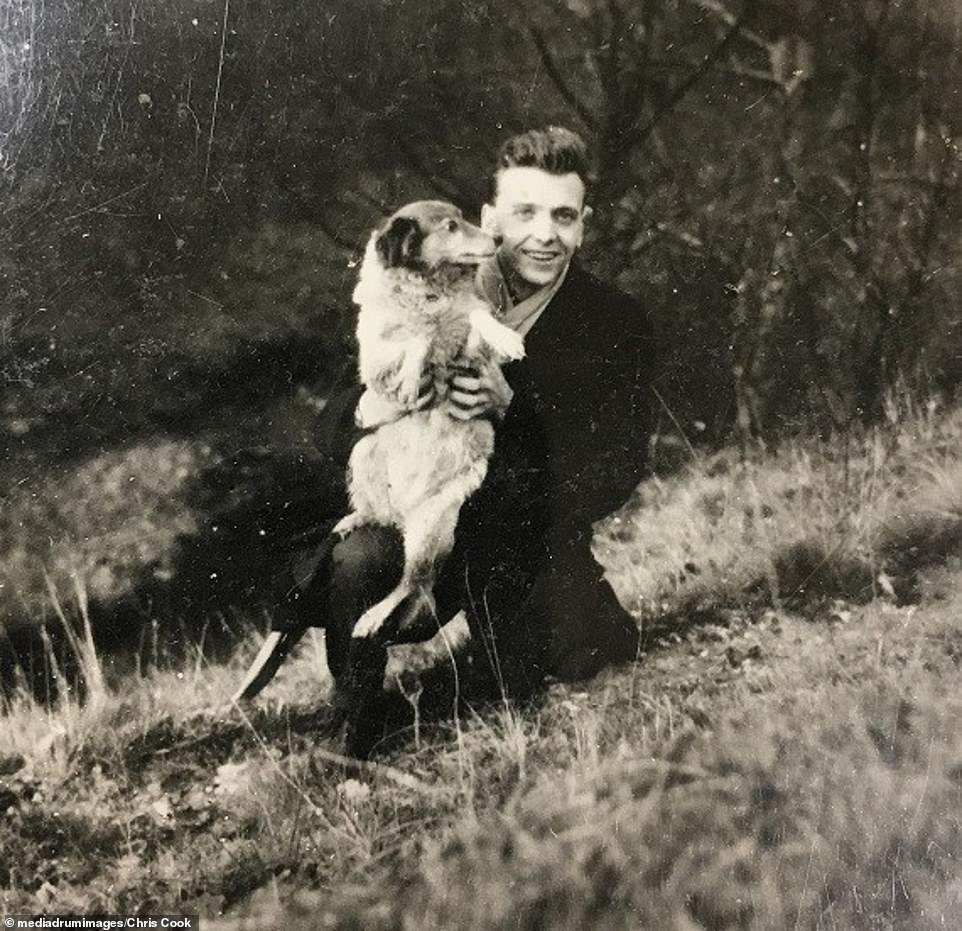 A new book reveals previously unseen images of Moors Murderers Ian Brady and Myra Hindley between 1950 and 1965 – the year they were arrested for their horrific crimes. Above: Brady is seen holding his pet dog aloft 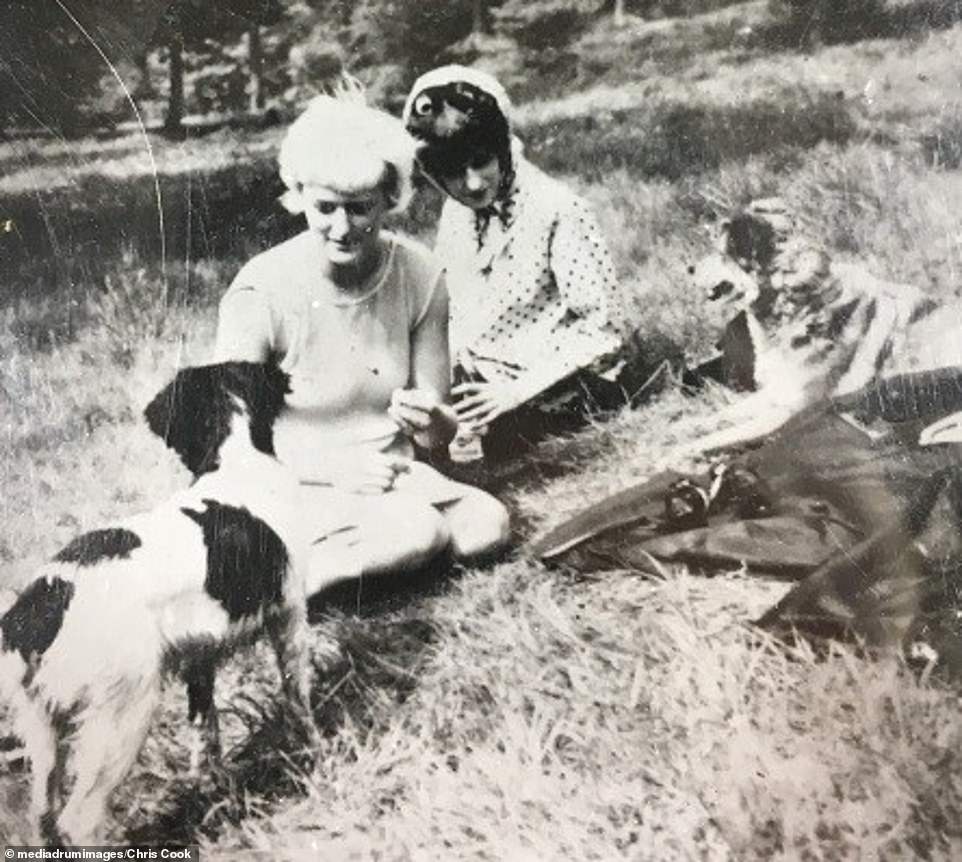 An unseen photograph of Myra Hindley and her sister Maureen (right) and her dogs. Maureen’s husband David Smith was witness to the murder of the couple’s final victim Edward Evans 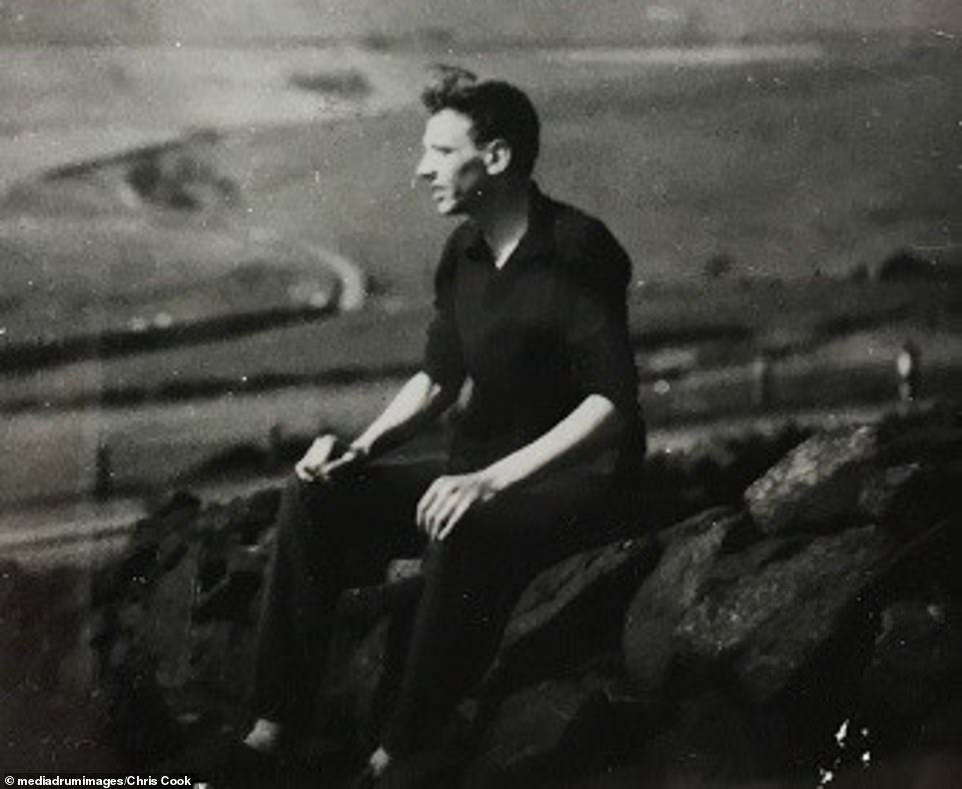 Ian Brady is seen posing for a holiday photo. The new images come from a collection called ‘The Tartan Album’ that was previously stored in a classified Home Office archive

The Moors Murders took place between July 1963 and October 1965.

The new images come from a collection called ‘The Tartan Album’ that was previously stored in a classified Home Office archive.

In later photographs in the album, images begin to lose their innocent façade with the smiling couple gradually becoming stony-faced, at the very time from 1963 when the couple began their murder spree.

Two disturbing images were taken by Brady whilst he was doing reconnaissance at Old Hall Drive School on Levenshulme Road before carrying out the first killing – the murder of 16-year-old Pauline Reade on July 12th 1963.

Under the pretence of finding a missing glove, Reade was lured into a van and abducted by Brady and Hindley on the way to a local dance.

Another harrowing image shows Myra Hindley posing on a hill which was taken on the same day that John Kilbride was abducted.

On November 23rd, 1963, Kilbride was offered a lift home by Brady and Hindley from a market in Ashton-under-Lyne.

Using the same narrative of the missing glove, the murderers made a detour to Saddleworth Moor where Kilbride was sexually assaulted and then murdered. 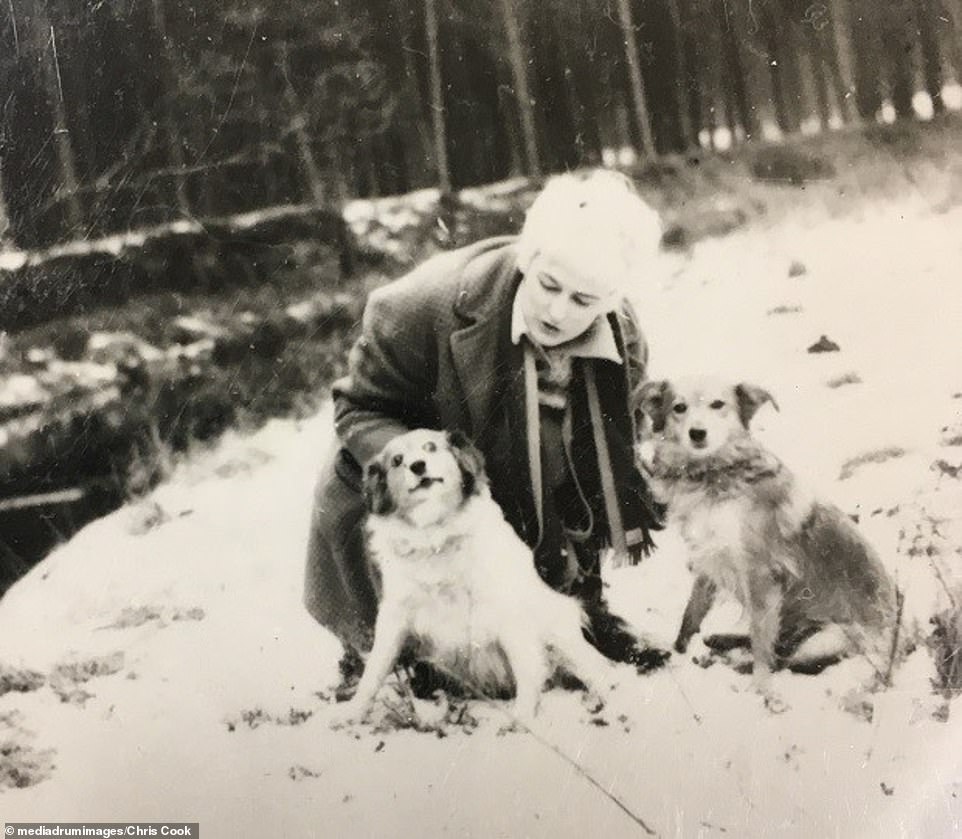 Hindley is seen posing with her two dogs in one of the images from the Tartan Album. The new images have been published for the first time in a new book by author Chris Cook, who found them at the National Archives after they were recently declassified 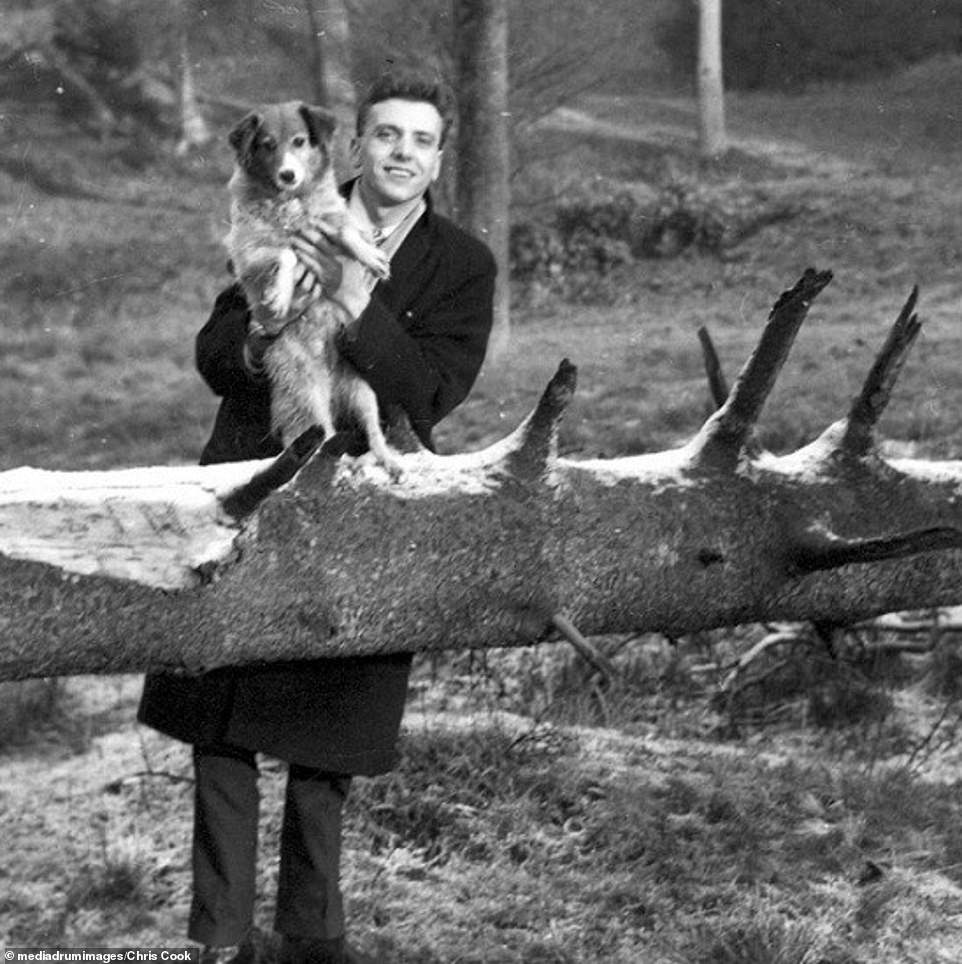 An unseen photograph of Ian Brady and his dog. The killer always refused to disclose the location of the remains of murdered Keith Bennett 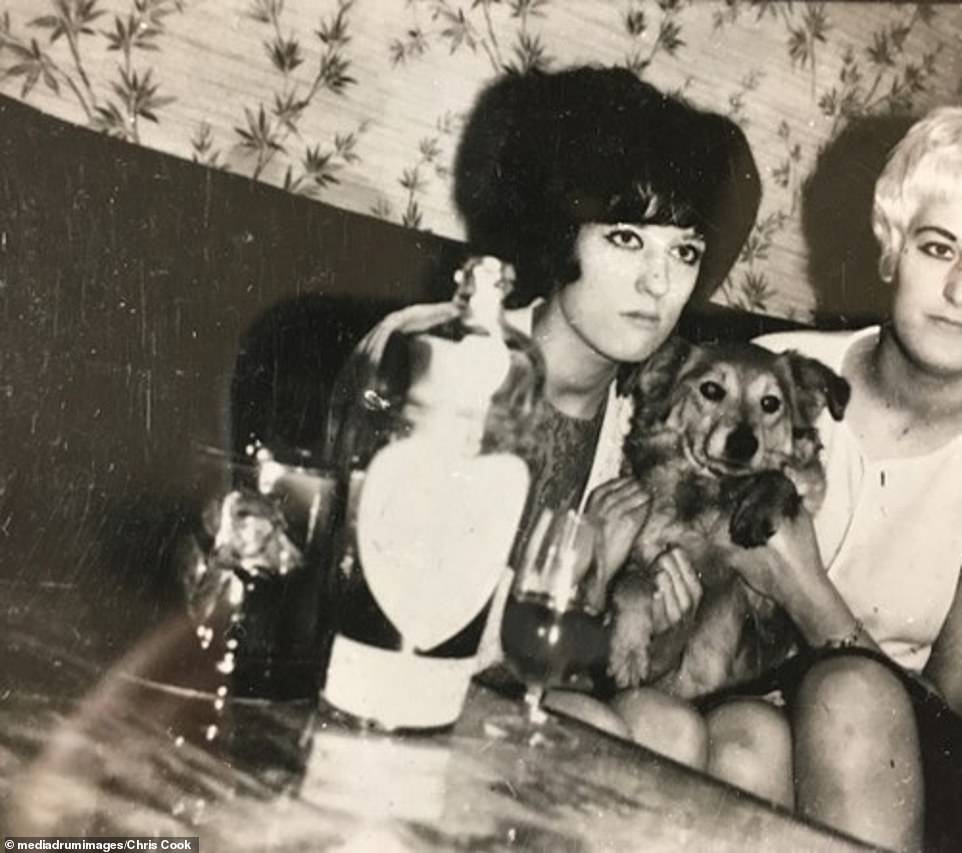 Hindley is seen right seated at a table with her sister and a pet dog. The Moors Murders took place between July 1963 and October 1965

Whilst these photographs began as a documentation of the memories of Brady and Hindley’s time together, they proved helpful to police and provided some important leads – such as the fact the couple chose to regularly pose near the burial sites of their victims.

This helped police to recover three of the victims’ bodies – Lesley Ann Downey and John Kilbride in 1965 and Pauline Reade in 1987.

It is unlikely that the police would have made this discovery without the help of David Smith.

Smith, the husband of Hindley’s sister Maureen, was witness to the murder of the final victim Edward Evans.

After witnessing Brady hit Evans with a hatchet and proceed to throttle him with electrical cord, Smith was expected to help the murderous pair bury the body on the moors.

However, Smith, so disturbed by what he had seen, contacted the police, prompting them to search Hindley’s grandmother’s house.

This search revealed the photo album along with a notebook with the name ‘John Kilbride’, amongst others written within it.

Mr Cook, 39, the author of The Moors Murderers, uncovered the images in the hope of getting a step closer to solving the mystery of where Bennett’s remains lie.

‘If you didn’t know anything about Ian Brady or Myra Hindley you would just assume that these photographs came from a normal family photo album,’ he said.

‘It shows you just how these two seemed so ordinary, how they would blend into any crowd, and how their victims obviously came to the same conclusion to get into Hindley’s car willingly.

‘I was actually researching for a book regarding the crimes of Fred and Rose West and I came across a probable victim of theirs, Mary Bastholm, who has never been found.

‘This, in turn, lead me to look at other well-known cases where victims of crimes hadn’t been discovered or recovered and it lead me to this case, where Ian Brady and Myra Hindley admitted to abducting and murdering Keith Bennett.’

Fred and Rose West were another one of Britain’s serial killing couples who murdered at least a twelve young girls, including two of their own daughters between the years of 1967 and 1987.

Their homicidal tendencies are similar to those of Brady and Hindley with many of their victims being sexually assaulted before being put to death.

Like Keith, Mary Bastholm’s remains are yet to be found.

In 1968 Bastholm, who was 15 at the time, was on the way to catch a bus after her shift at the Pop-In Café. From here her story remains a mystery with no clear insight into the details of her disappearance.

Such distressing events cause incomprehensible pain and suffering for the families of victims, especially those who are never to receive closure.

‘The pain and torment of what his family must still be going through really touched me, so I decided to investigate further to see if there was anything that had been missed over the years in regard to where his remains are buried. 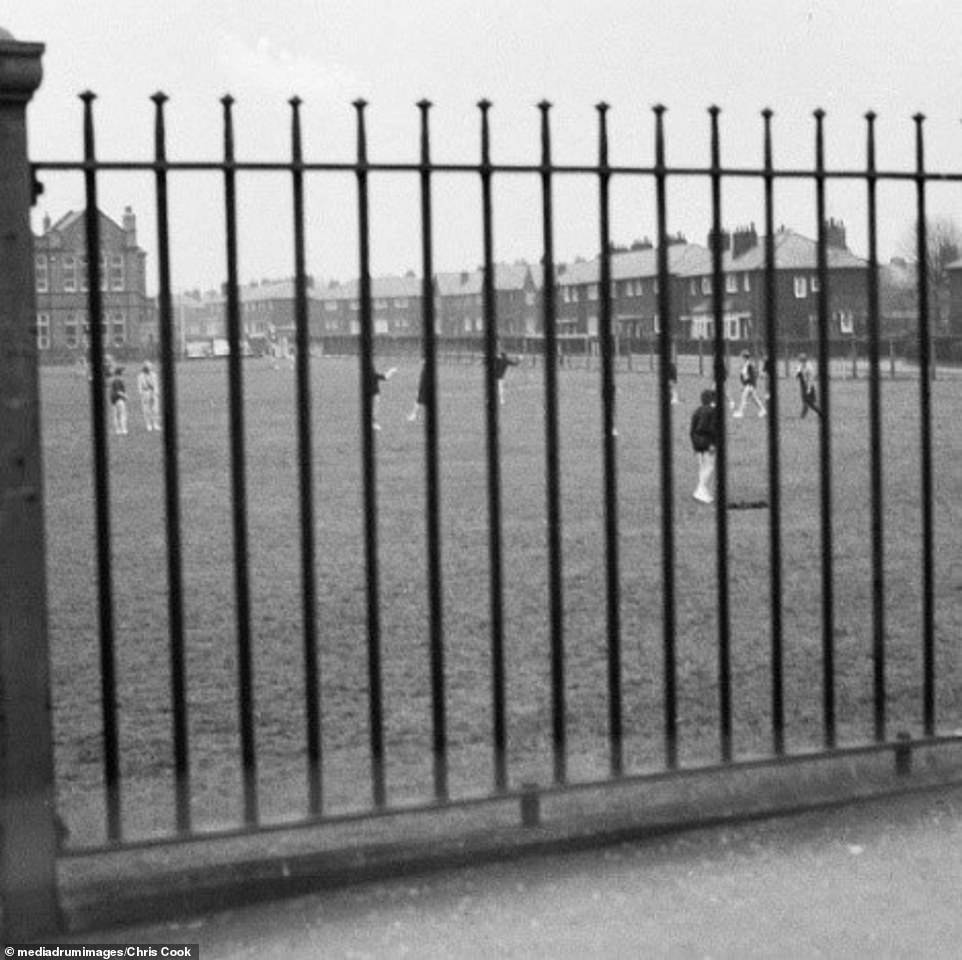 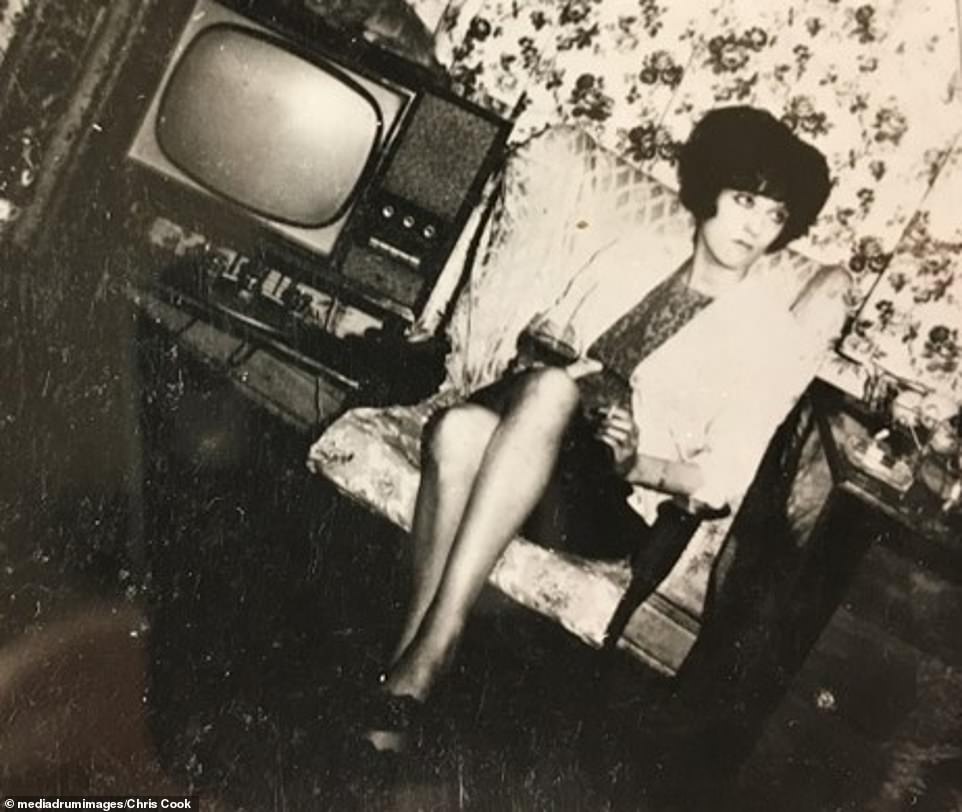 An unseen photograph of Maureen Hindley, Myra’s sister. Her husband was a witness to Hindley and Brady’s final murder 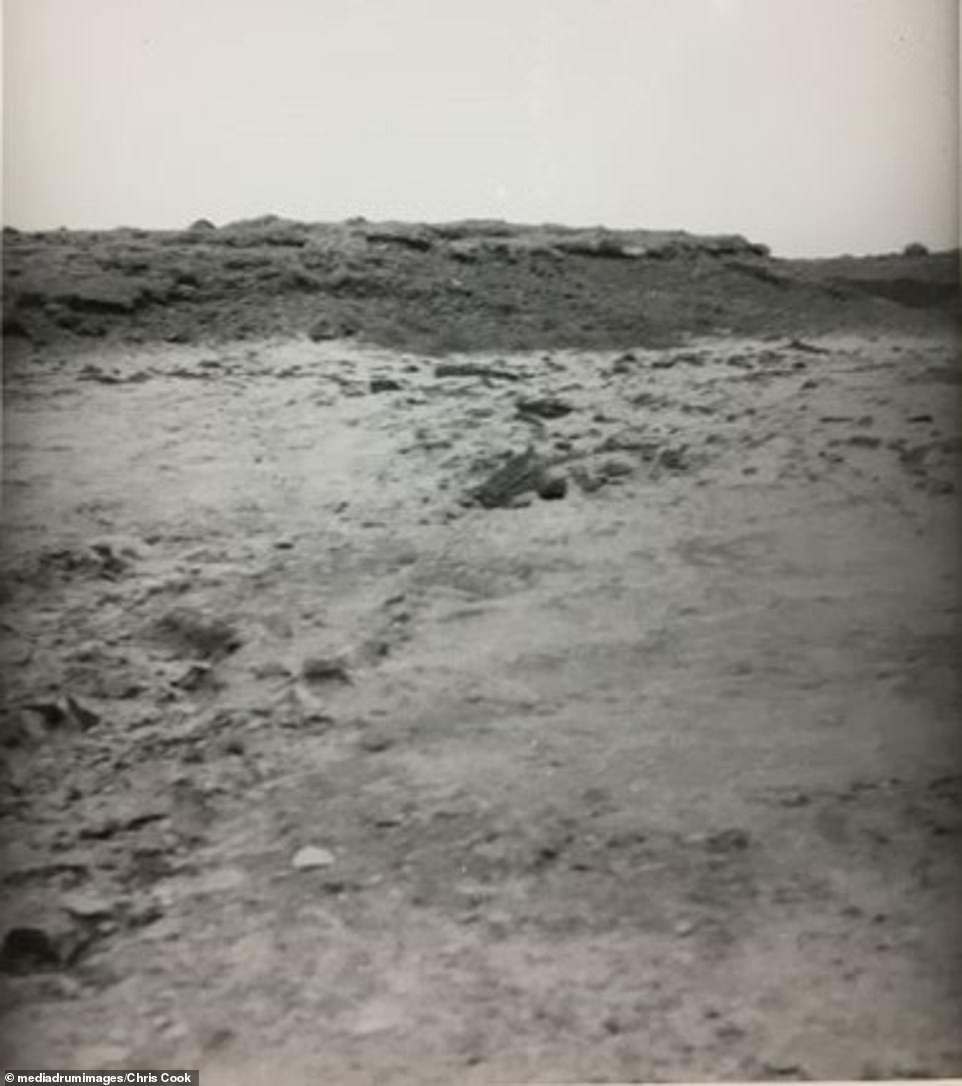 An unseen photograph from Ian Bradys Tartan album of moorland. It was this type of photograph that detectives had to try to locate during the investigation 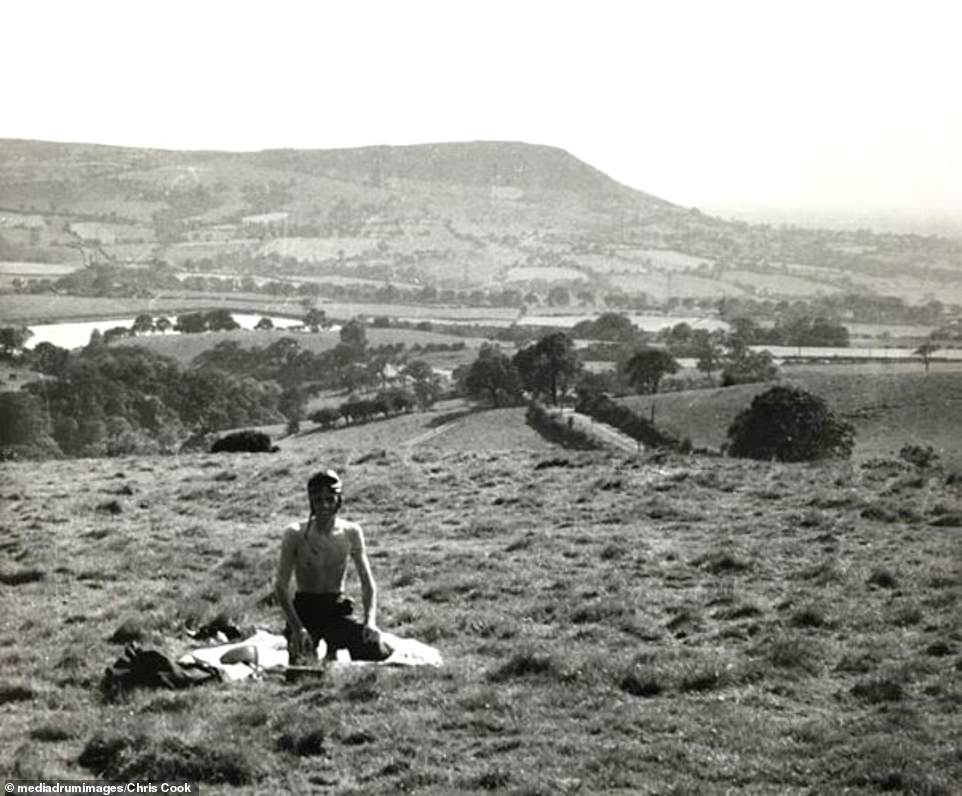 A topless Brady is seen posing for an image as he kneels on a blanket in the British countryside. Whilst these photographs began as a documentation of the memories of Brady and Hindley’s time together, they proved helpful to police and provided some important leads 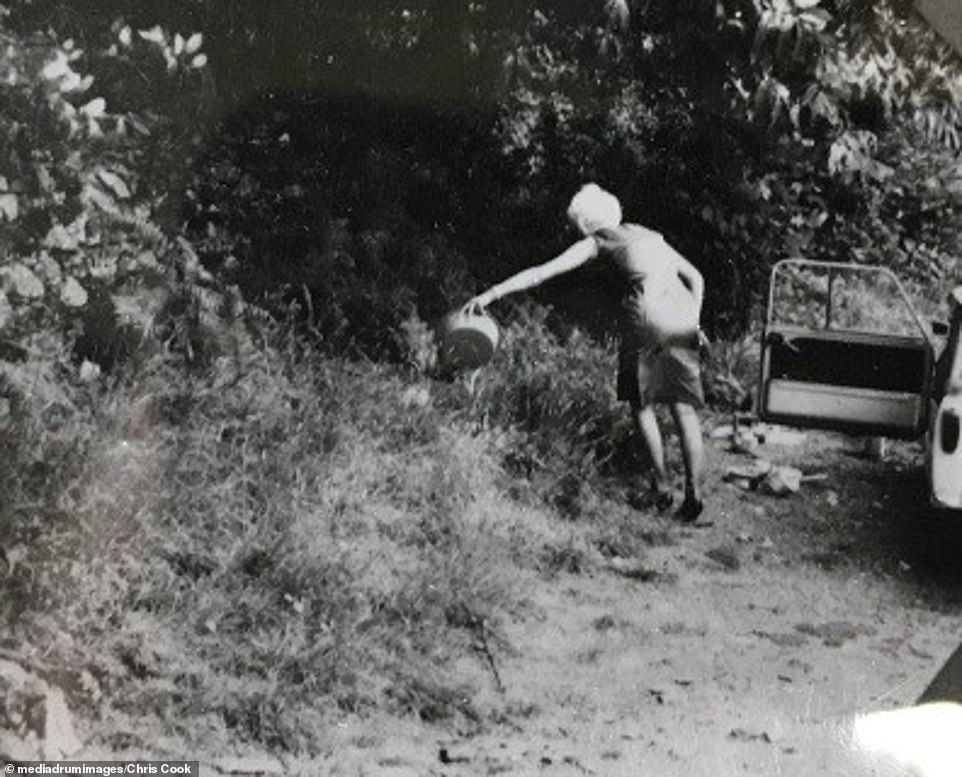 An unseen photograph of Hindley pouring something away in a ditch. Mr Cook said: ‘There are still a lot of photographs, maps and files withheld by the Home Office, but over the past five years I have had some of these released to the public under the Freedom of Information Act and they appear in this book for the very first time’

‘These photographs show just how hard it was for detectives to track down each and every scene.

‘Where one clearly showed Myra holding her puppy and looking down at a disturbed piece of ground, which turned out to be John Kilbride’s grave, they attempted to track down each and every place where the couple had taken scenery.

‘As a major part of my research, I visited the National Archives in Kew, London, and looked at all of the files held on the subject by the Home Office and Department of Public Prosecution.

‘One of the files held the released photographs from Ian Brady’s Tartan album, which the police used originally to help locate the sites of where some of the victims, especially John Kilbride, were buried.

‘There are still a lot of photographs, maps and files withheld by the Home Office, but over the past five years I have had some of these released to the public under the Freedom of Information Act and they appear in this book for the very first time.’

Whilst Mr Cook has not yet solved the mystery of where Keith remains can be found, he did uncover some chilling insights.

Following Myra Hindley’s confession in 1987, a detailed map of Hoe Grain was revealed by her confidante and was labelled with the steps that she said had been taken by herself and Brady on the day of Bennett’s murder, leading police to suspect that this is the location of his body.

‘I did discover some documents that back up why the police searched around Hoe Grain, although I don’t believe this to be where he was buried,’ he said.

‘I had a new Home Office file unlocked recently which contains police reports from the re-investigation in the mid-1980s, and the reason that there are still photographs and maps withheld is because they show the area around Hoe Grain where they believe Keith Bennett to be buried.

‘The Home Office won’t release these for fear of people conducting their own searches and potentially damaging any evidence.

‘I personally don’t believe the body is there, and believe it to be much closer to the Hollin Brown Knoll area, where the other bodies were found.

‘Brady always said he wanted to commit the perfect murder, and to him that meant that the body was never found.

‘By telling the police the body was near Hoe Grain, I believe, keeps all searches looking in the wrong area and is the final pact that keeps Brady and Hindley locked together.’

The Moors Murderers by Chris Cook can be purchased from Pen & Sword Books for £25: https://www.pen-and-sword.co.uk/The-Moors-Murderers-Hardback/p/21137. 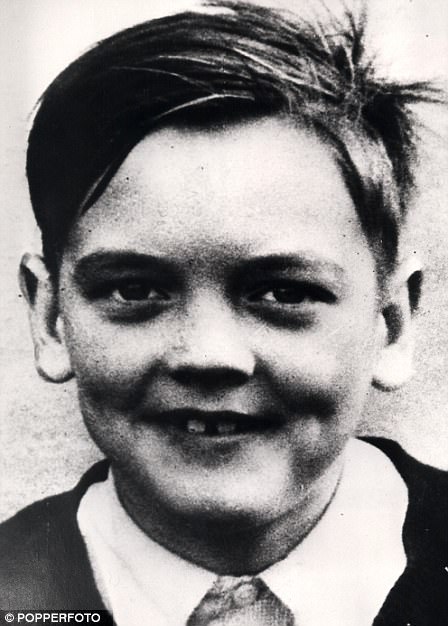 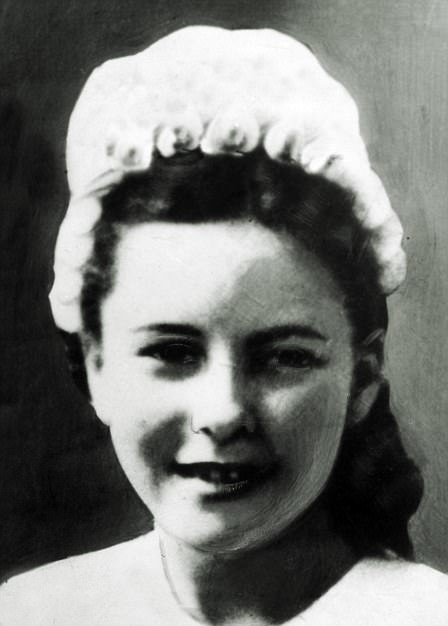 John Kilbride, 12, (left) and 16-year-old Pauline Reade (right) were killed by the pair and their bodies were later located in the North West 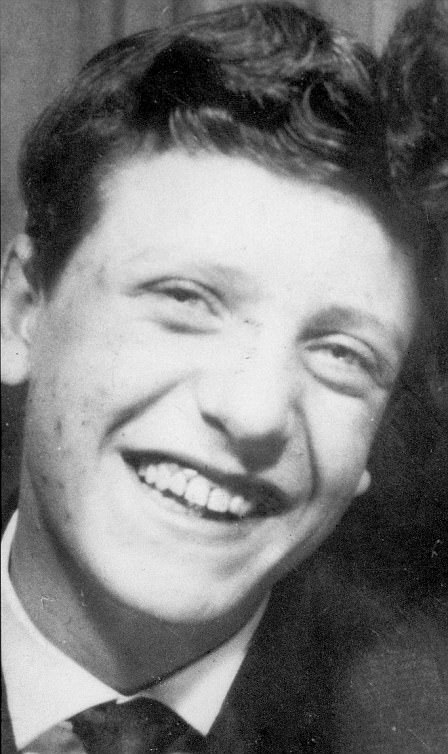 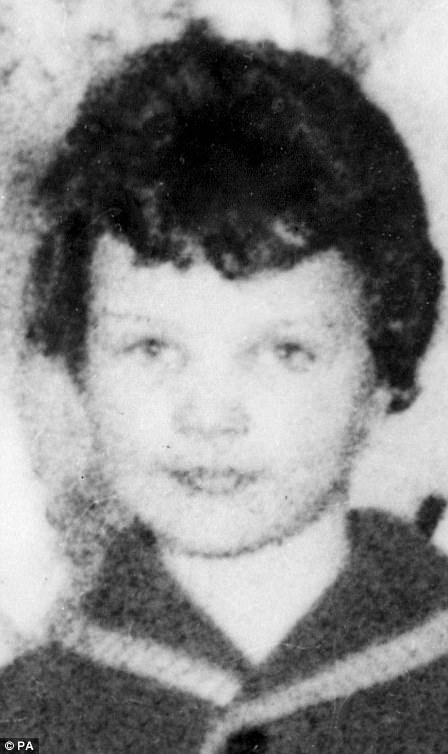 Lesley Ann Downey (right) was killed when she was just ten, while Edward Evans (left) was 17 when he was murdered by the pair 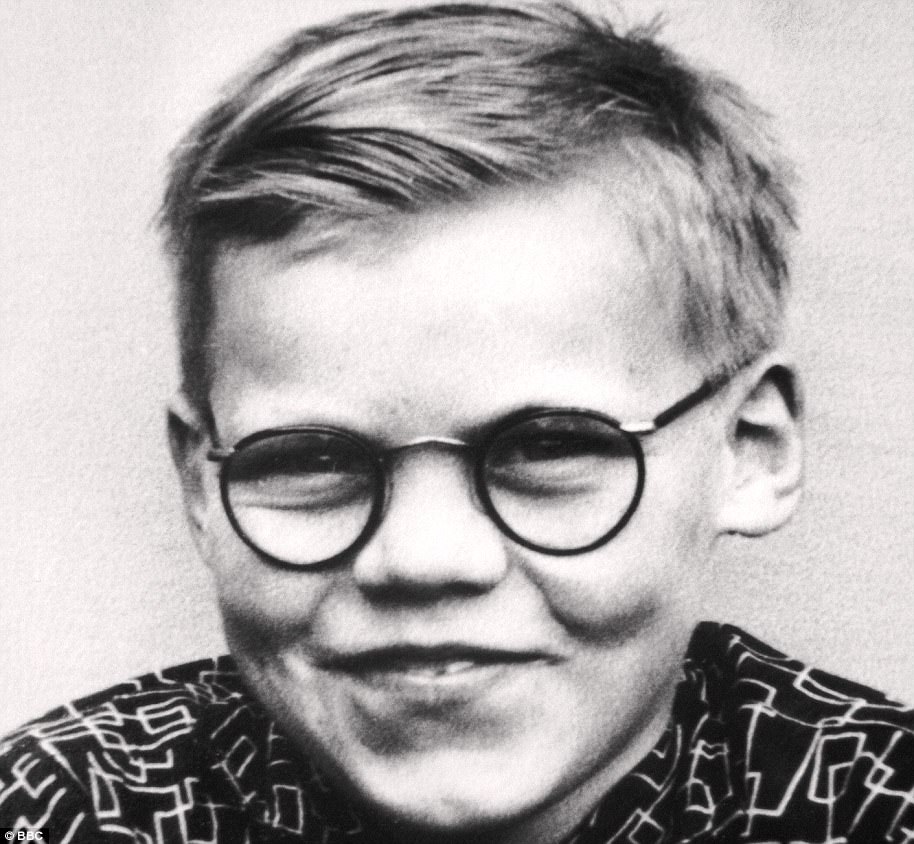