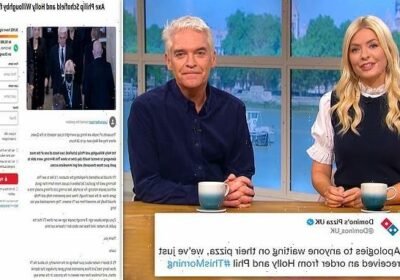 ‘Too posh to queue’: 37,000 sign petition for Holly Willoughby and Phillip Schofield to be AXED over line-skipping row… as viewers REJECT stars’ bid to ‘draw a line under’ scandal and now even Domino’s are trolling the pair

A petition to axe This Morning presenters Phillip Schofield and Holly Willoughby over accusations they ‘jumped the queue’ at the Queen’s lying-in-state has hit more than 37,000 signatures – as viewers reject the stars’ bid to draw a line under the scandal.

The pair – who are reportedly paid as much as £600,000 for hosting the popular daytime show from Mondays to Thursdays – have faced growing fury after images of them appearing to ‘skip the line’ emerged on Friday while tens of thousands of mourners patiently waited for more than 12 hours to pay their respects to Her Majesty.

A petition alleging they ‘were able to push past those thousands and get immediate access’ continues to collect more signatures.

Viewers have been tweeting accusations the hosts are ‘too posh to queue’ as even pizza chain Domino’s join in trolling Phil, 60 and Holly, 41.

‘Apologies to anyone waiting on their pizza, we’ve just received an order from Holly and Phil #ThisMorning,’ Domino’s said. 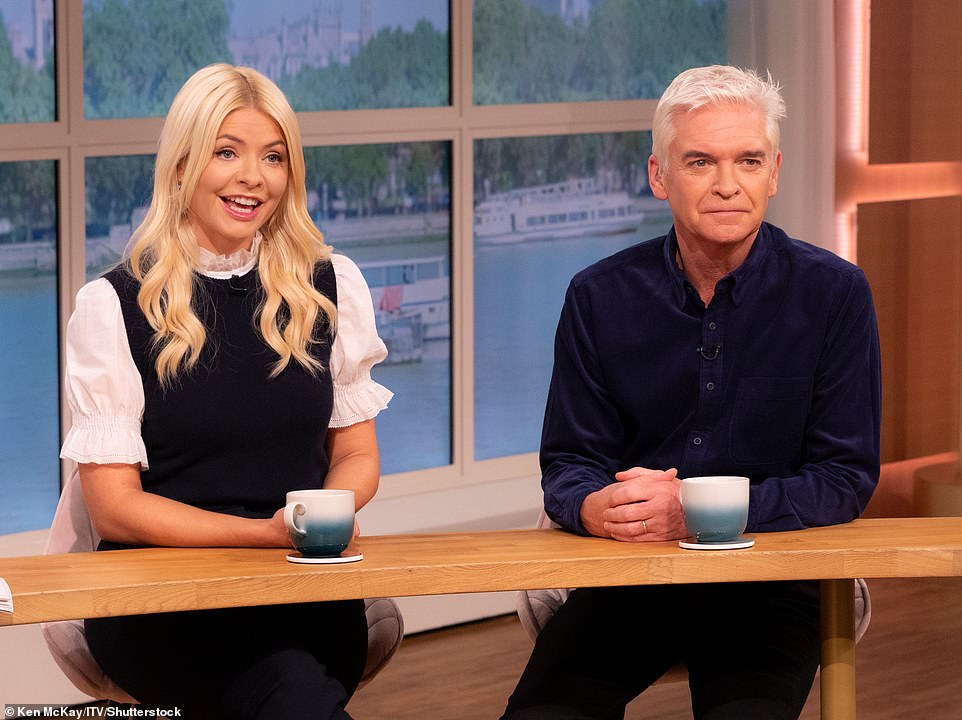 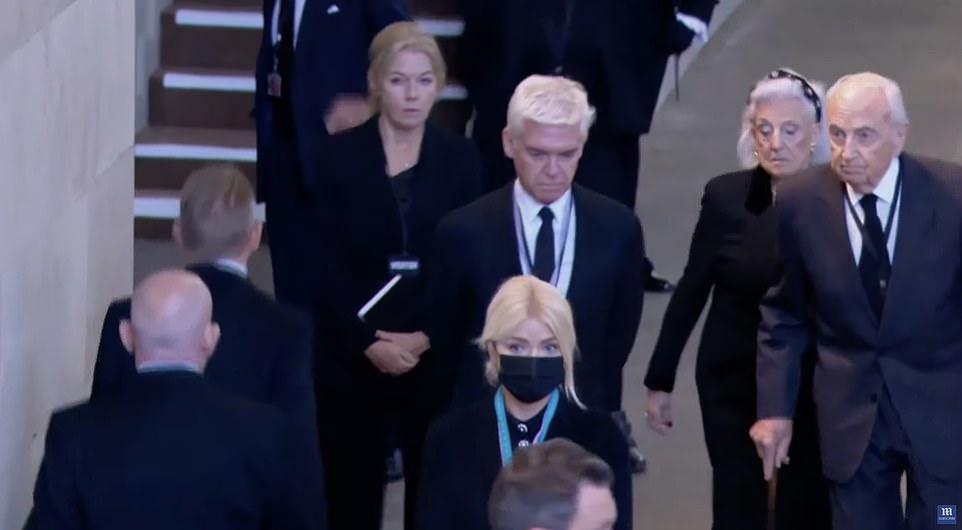 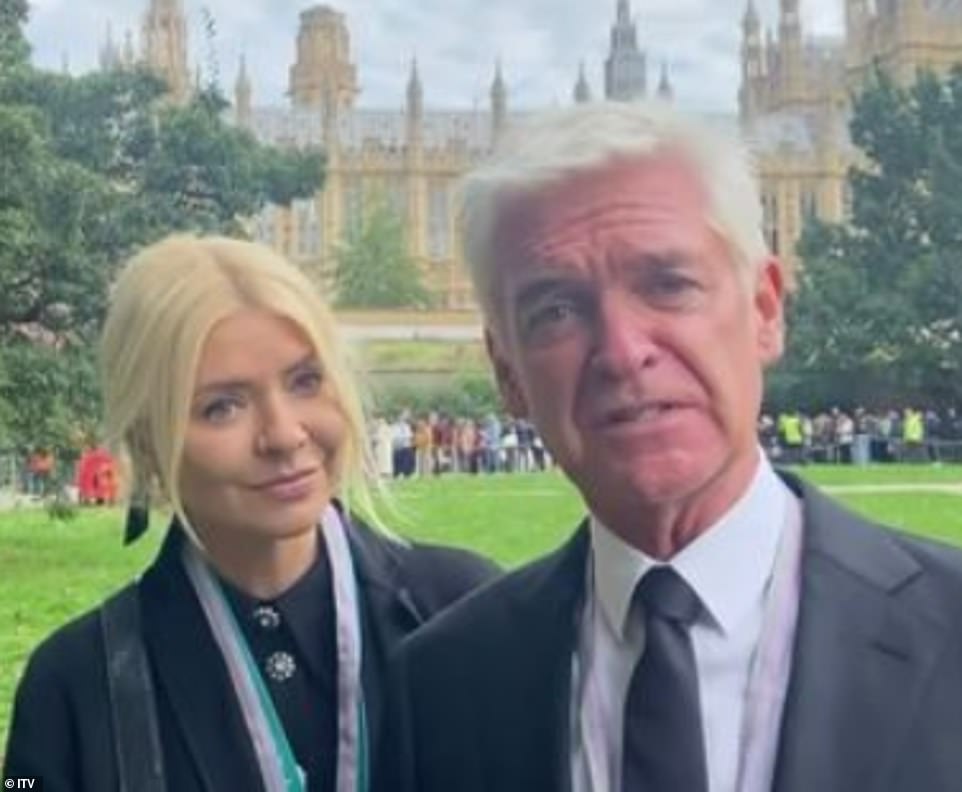 Holly and Phil outside the Houses of Parliament. The pair say none of the broadcasters and journalists at the Queen’s lying-in-state took anyone’s place in the queue 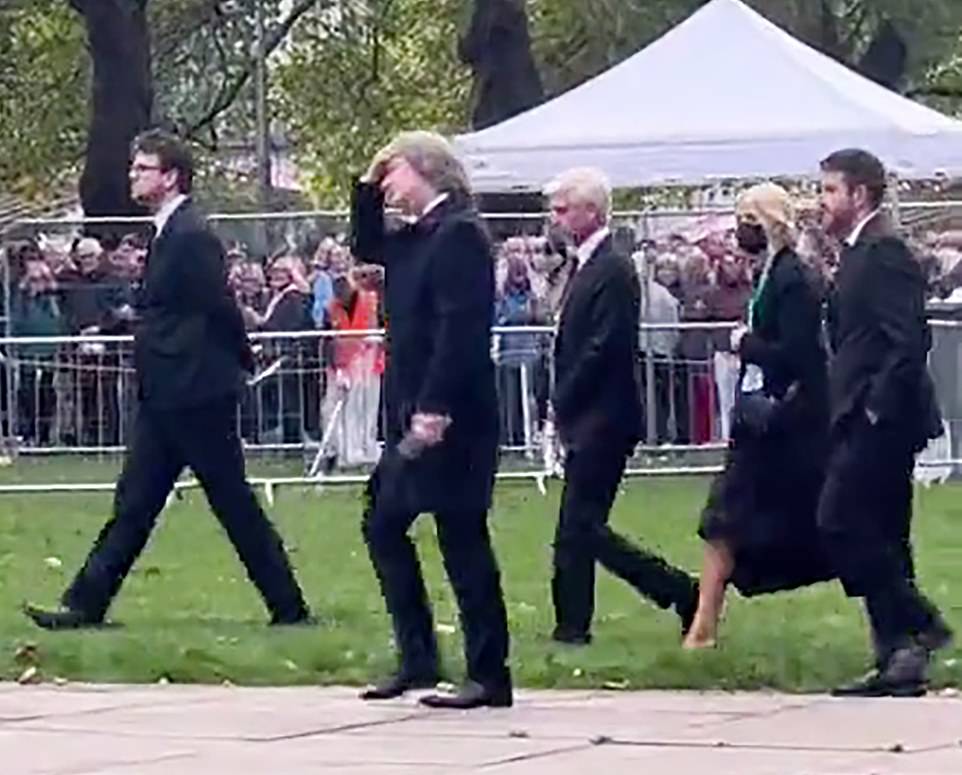 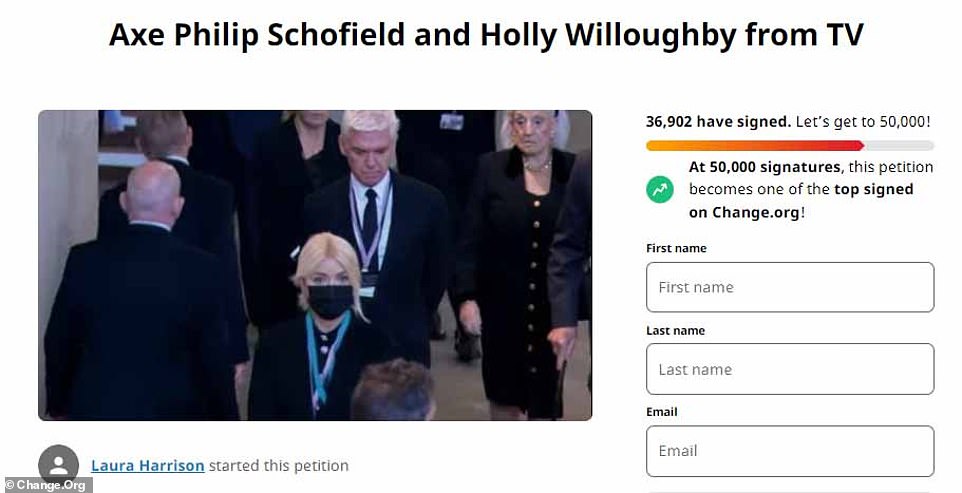 The change.org petition calling for the presenters to be axed is getting more and more signatures as time goes on

The change.org petition, titled ‘Axe Philip Schofield and Holly Willoughby from TV’ was started four days ago and has been gaining traction.

It argues morning TV has been ‘monopolised too long’ by the show and claims they should not get ‘privileges’ ordinary people cannot enjoy.

Holly and Phil have strongly denied claims they jumped the queue and immediately defended themselves saying they were working and like hundreds of broadcasters and journalists were given official access to Westminster Hall.

‘They’re devastated by the reaction and the way the false claim they skipped the queue took off on social media. Holly has been in tears, and Phil has been very upset,’ a source told The Mirror.

‘But they were determined to face the criticism head-on on Tuesday’s show and not shy away from it. They hope they can now draw a line under it, and that people understand the context.

‘The irony of all of this is that they headed down to Westminster to work on their day off on Friday, and spent the entire weekend working on the footage, as they were so determined to deliver extra coverage for the viewers about the Queen.’ 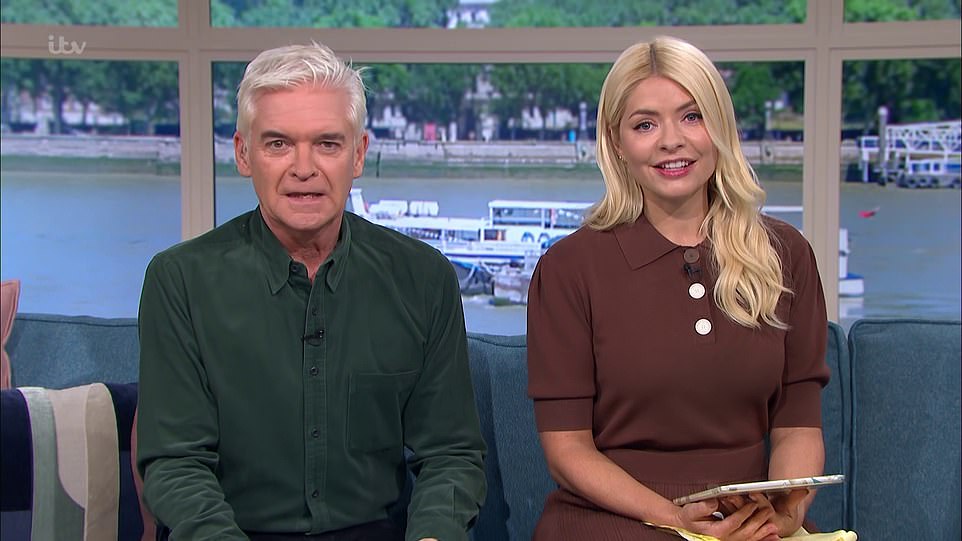 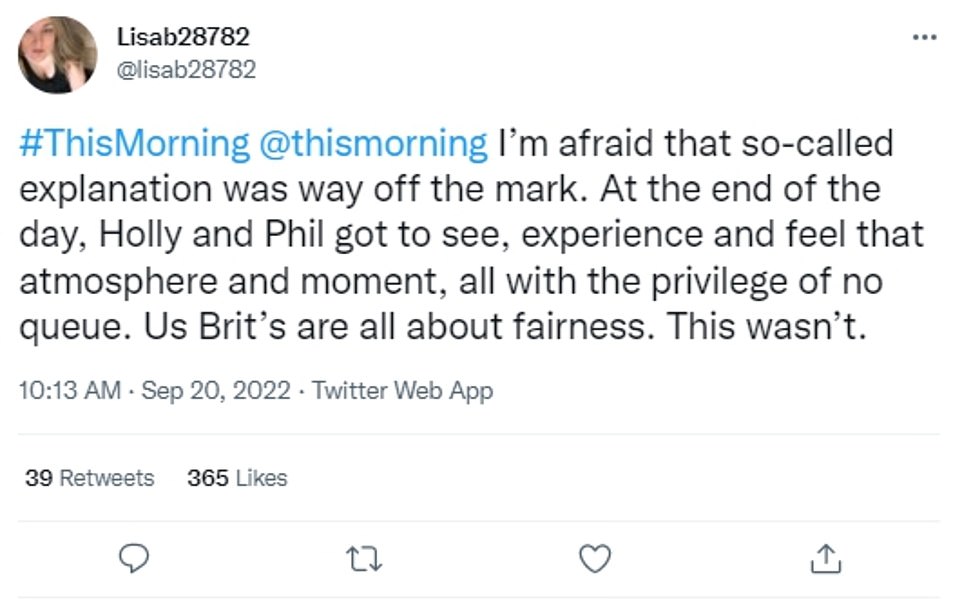 In the first episode of the show since the row unfolded, Holly and Phil strongly denied viewers’ claims they were ‘too posh to queue’ and said they had been in Westminster Hall to work on Friday.

They said: ‘Like hundreds of accredited broadcasters and journalists we were given official permission to access the hall.

‘It was strictly for the purpose of reporting on the event for millions of people in the UK who have not been able to visit Westminster in person.

‘The rules were that we would be quickly escorted around the edges to a platform at the back.

‘In contrast, those paying respect walked along a carpeted area beside the coffin and were given time to pause.

‘None of the broadcasters and journalists there took anyone’s place in the queue and no one filed past the Queen. We of course respected those rules.

‘However, we realise that it may have looked like something else, and therefore totally understand the reaction. Please know that we would never jump a queue.’

But social media users were not convinced, with one saying: ‘I’m afraid that so-called explanation was way off the mark. At the end of the day, Holly and Phil got to see, experience and feel that atmosphere and moment, all with the privilege of no queue. Us Brit’s are all about fairness. This wasn’t.’

Another said: ‘Too posh to queue are we?? Who do you think you are?’ 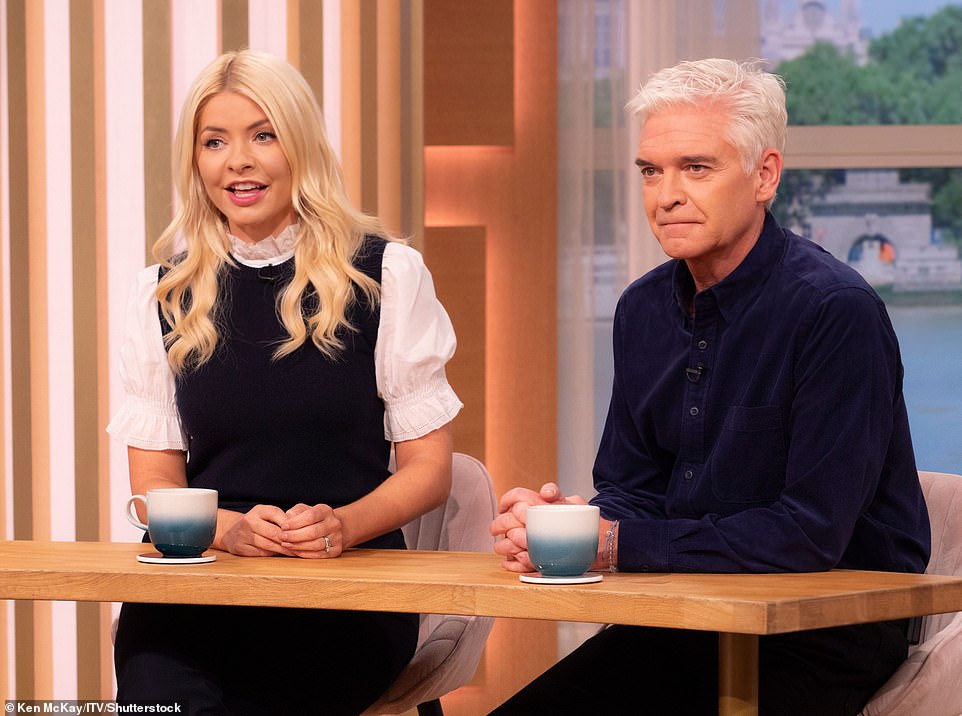 A source close to Holly told the MailOnline that they ‘spent most of today speaking to producers about queue-gate, they have assured her that viewer reaction has not been as bad as the social media fallout.

‘Many show insiders still fear what the future may hold but bosses seem to have calmed her down from the weekend where she was very upset about the whole thing. The row has only brought her close to Philip too.’

A source told The Sun on Tuesday evening that ‘Holly had to get lawyers over the weekend over the presentation of this false, very damaging narrative’.

‘She has been devastated by all the negative reaction after she turned up to work at Westminster Hall with Phil on Friday, but she’s not going to resign. This Morning has been her life for more than a decade and the only way she’d consider quitting at this stage is if viewers really didn’t want her there,’ the source said.

‘She’s tried to give their side of the story on the show today and they’re both hoping to move on from it now. Bosses know Holly is still a hit with viewers and are counting on her working her magic on the show for a good while yet.’ 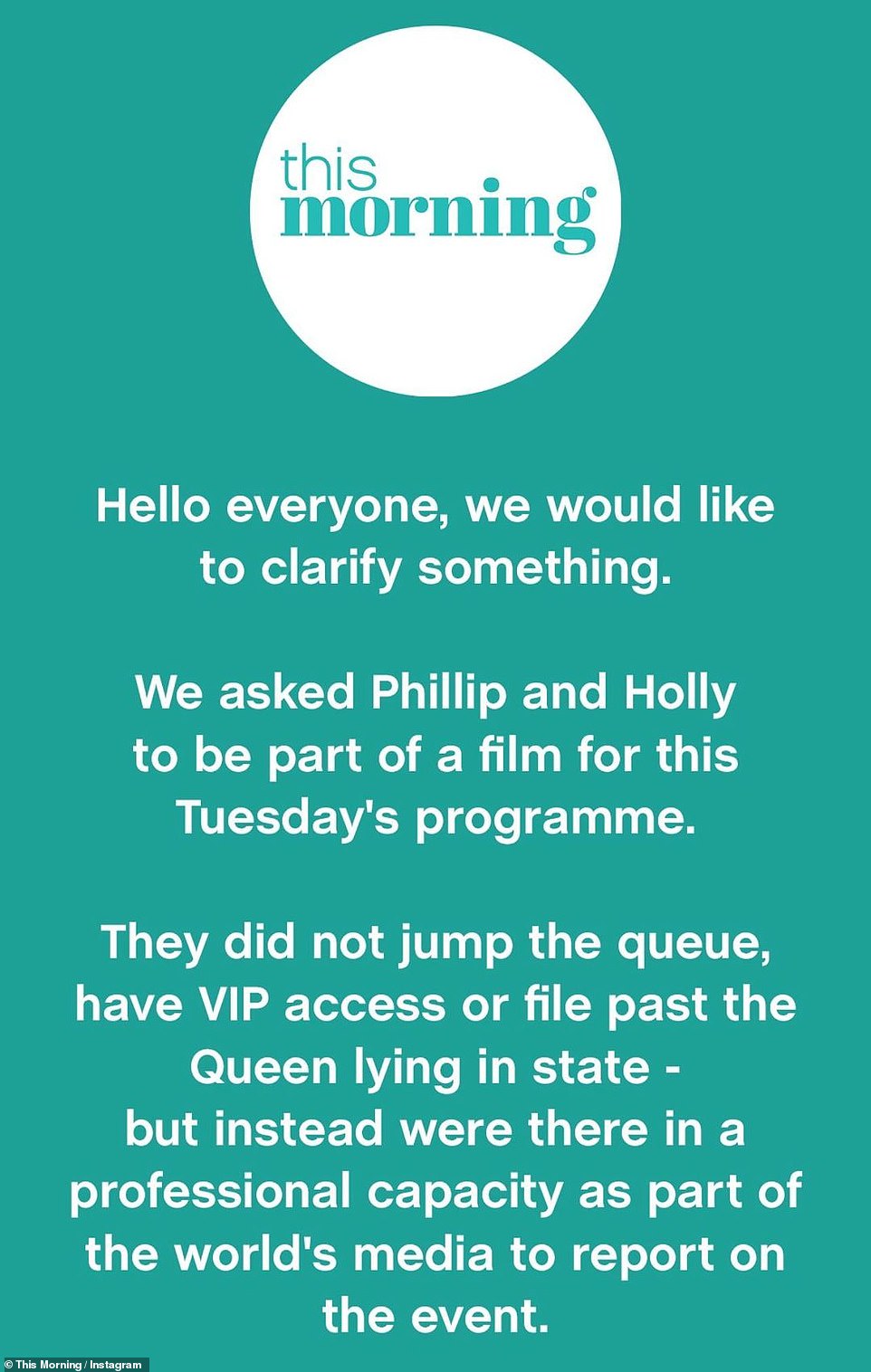 Statement: On Saturday, This Morning bosses denied show hosts Holly and Phillip had ‘VIP access’ and filed ‘past the Queen lying in state’

An ITV source said: ‘We absolutely made it clear at the time that it was part of a broadcast due to air on Tuesday. This was communicated from the outset, and we gave this information immediately. There have been no crisis discussions or talks about Holly not being part of This Morning moving forward.’

MailOnline understands that the pair personally insisted that fiasco be addressed at the start of the show and believe ITV should not have waited so long to speak out on the matter – spending the weekend ‘locked in talks’ with TV producers. A source revealed: ‘Philip and Holly are dumbstruck at the level of anger they’ve received in the past few days. They felt ITV should have made it clearer, right away, that it was part of a broadcast.’

But comparisons were quickly made to other celebrities who queued for hours with the general public – including England football legend David Beckham and even Holly and Phil’s ITV colleague Susanna Reid, from news show Good Morning Britain.

Earlier it was revealed that around 250,000 people paid their respects in person to the Queen by seeing her coffin – with all of them having to queue for hours. Culture Secretary Michelle Donelan gave the figure the morning after the nation’s longest-reigning monarch was buried at Windsor Castle.