Paris: Seven people have been confirmed dead and up to 20 missing after floods hit southern France over the weekend, according to local authorities, as neighbouring Italy says it has found six bodies on its shores.

France confirmed three more deaths on Monday, bringing the death toll to four in France and three in Italy. Emergency services say another eight people swept away by floods are "missing" and a further 13 "presumed missing". 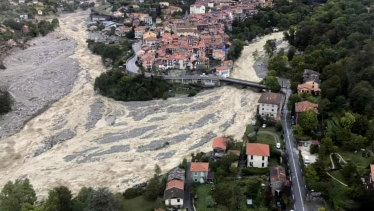 A house keeping a fragile balance on a hill while a river floods near La Vesubie, southern France. Credit:AP

"I fear that the death toll will, unfortunately, climb as we investigate on the ground," warned Charles-Ange Ginésy, head of the Alpes-Maritimes departmental council.

In Italy, it was first thought that six bodies found on beaches – five men and a woman – had died during the storms, their bodies then washed out to sea and carried to the Italian Riviera. But Bernard Gonzalez, the prefect of the Alpes-Maritimes region, said they were "very probably" already dead and in coffins that had been washed away from cemeteries in France.

Storm Alex brought flash floods and torrential rain to parts of France and Italy. Up to 20 in (50 cm) of rain fell in less than 10 hours, a volume not seen since records began, according to Jean Castex, the French prime minister.

Almost 1000 firefighters were drafted into the region to search for the missing and re-establish communications. Eric Ciotti, head of the Provence-Alpes-Côte d'Azur region, said the damage would cost an estimated billion euros to repair.

Ten trucks of food aid are being dispatched to the area from Nice and President Emmanuel Macron is due to visit later this week.