A pediatrician who raised money to buy his student medical books by selling items outside a temple in India has been named Victoria’s Australian of the Year.

Dr Angraj Khillan, of Essendon, took the gong at an awards ceremony on Tuesday evening at Government House, where three others were also named Victoria Australian of the Year in the senior, youth and local hero categories. 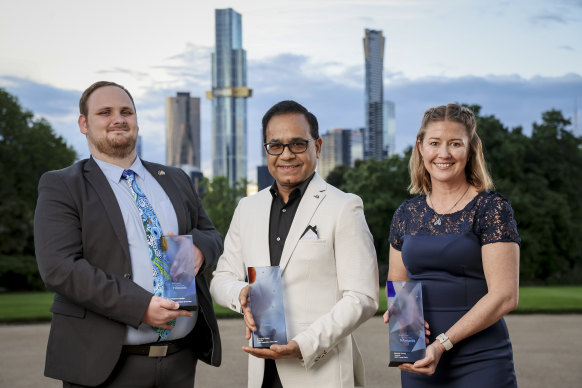 He co-founded the Health Awareness Society of Australia, which dispels myths, taboos and misinformation about health through forums in a range of languages.

A second pediatrician, Professor Frank Oberklaid, was awarded Victoria’s Senior Australian of the Year for his internationally recognised career in children’s health.

His focus has been on helping children with developmental and behavioural problems. He recently developed the Mental Health in Primary Schools Program, which upskills teachers to become mental health and wellbeing co-ordinators.

Oberklaid, 76, is an honorary paediatrics professor at the University of Melbourne.

The Victorian Young Australian of the Year is Darcy McGauley-Bartlett, who is an advocate for Indigenous health care in prisons.

The Gunaikurnai man struggled through his schooling and teenage years, having grown up in a dysfunctional environment, but emerged as a strong role model and advocate.

As a Victoria Police community liaison officer, McGauley-Bartlett was instrumental in ensuring fewer Indigenous people went into the justice system.

The 24-year-old implemented and runs Victoria’s first Aboriginal Youth Cautioning Program, which ensures young Indigenous people’s eligibility for a caution when they come into contact with the justice system for the first time.

Founder of the Mums of the Hills Facebook group Belinda Young is Victoria’s Local Hero for helping mothers connect online and in person in the Yarra and Dandenong ranges.

Young has given people practical support after recent natural disasters, including through organising workshops about insurance and bushfire-preparedness, along with chainsaw workshops.

She has also advocated for better broadband, childcare services and infrastructure from her home in Sassafras, and supported mothers escaping domestic violence and dealing with financial struggles.

The Victorian award recipients will join those from other states and territories at the national Australian of the Year awards on January 25.