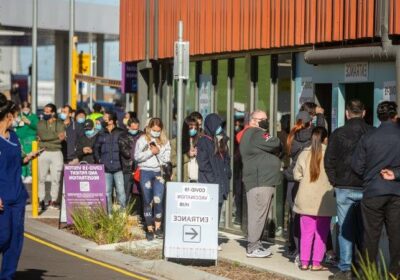 Patients were turned away from emergency departments at two Melbourne hospitals for several hours overnight after more than 220 staff were forced into isolation due to a growing list of COVID-19 exposure sites in the city’s western suburbs. 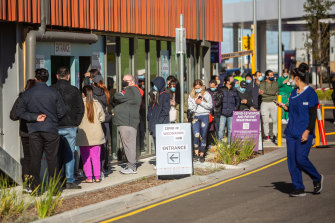 Staff at Sunshine Hospital have been busy testing and vaccinating Victorians. But the emergency department was forced to close on Tuesday night due to staff shortages.Credit:Scott McNaughton

“Between 220-250 staff have been furloughed due to the impact of there being hundreds of exposure sites in areas where Western Health staff live,” she said.

“ Staff are being tested and in isolation. This is impacting service delivery and efforts are being made daily to address this.

“There were periods of time last night where they were not able to accept more patients.”

Victoria recorded 20 new cases of COVID-19 on Wednesday. Fifteen of those cases have been linked to the current outbreaks but five are still under investigation. Fourteen of the 20 were in quarantine throughout their infectious period.

There were 41,571 test results processed while the state-run clinics administered 23,811 doses of COVID-19 vaccines. There remain 18 active cases across the state.

A Catholic primary school in North Melbourne has also been closed and hundreds of staff and students are now isolating after a student tested positive for coronavirus after attending the school on August 5.

St Michael’s Primary School principal Denise Hussey said in a statement sent to parents and carers on Tuesday that the school was closed until further notice to conduct contact tracing and do a deep clean.

“I understand this news will be concerning for many of you. I want to assure you we are doing everything we can to contain and slow the spread of the virus and ensure the health and safety of the whole school community,” he said.

Students and staff from several junior classes are considered tier-1 close contacts and must get tested and isolate for 14 days. The remainder of the school is being treated as a tier-2 site.

Several new exposure sites were listed late on Tuesday, including bus and train lines and a nail salon.

Bus routes 426 and 460 have both been listed as tier-1 exposure sites on August 5, and route 460 on August 4 as well, while the Sunbury line from Watergardens to Sunshine Stations is listed as a tier-2 site on August 4, 5 and 7. 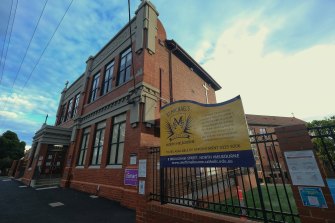 Authorities also added AK Nails Beauty at the Woodgrove Shopping Centre in Melton West as a tier-1 site on August 1. The shopping centre, a major hub in Melbourne’s outer west, is yet another exposure site in an outbreak that is now spreading via the state’s high-density shopping outlets.

Elsewhere, everyone who worked at a busy shopping centre west of Melbourne over four days must quarantine for two weeks. More than half of Victoria’s COVID-19 cases on Tuesday were linked to the CS Square shopping centre in Caroline Springs.

A doctor who worked at Melbourne’s Royal Children’s Hospital was among one of 20 locally acquired COVID-19 cases on Tuesday, but a hospital spokesperson said the doctor was not infectious while he was working at the hospital.

The health department was investigating whether the doctor was infectious while working on Monday, August 9, at private medical rooms next door to the hospital at 48 Flemington Road, which has shared common areas with the hospital.