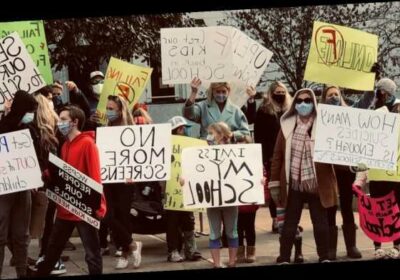 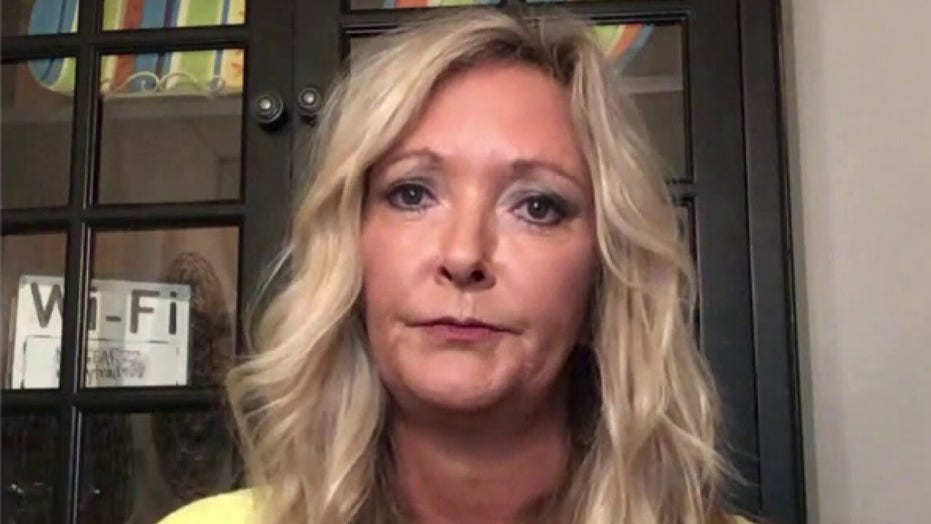 Chicago public school parent Amy Jacobson tells ‘Fox &amp; Friends’ teachers refusing to return to the classroom is about ‘their needs and not our children’s needs.’

Parents across the U.S. are lobbying for their children to return to in-person learning as some students face the possibility of completing an entire school year without entering a classroom in addition to the months they lost at the end of the 2019-2020 school year.

North Carolina parent Kelly Mann gave up her full-time job in July to stay home with her three daughters after the Wake County Public School System said they’d be stuck in remote classes for the foreseeable future because of the coronavirus pandemic.

Her sixth-grade daughter, always an A/B student, fell to a 50% grade in math and was feeling “isolated,” Mann told Fox News.

“It’s insanity. It’s not education. North Carolina is not serving children. They’re not upholding the right to an education right now, and this is fully political,” Mann told Fox News. “We have the science, we have the facts, we have the medical experts. We know schools should be open for our children.”

On Saturday, Mann helped organize a rally with more than a hundred parents and educators at the North Carolina governor’s mansion to pressure state and local leaders to reopen classrooms.

They received a boost when the Centers for Disease Control and Prevention and Duke Health each released studies last week showing that in-person learning is generally safe if schools take proper safety precautions.

Christy Hudson, a mom from Fairfax County, Va., told “America’s Newsroom” that the county’s postponement of in-person learning is “heartbreaking” and “devastating.”

“We are watching our kids suffer tremendous academic regressions as well as social, emotional and behavioral problems,” Hudson said.

In North Carolina, a patchwork of counties has continuously delayed the return to in-person learning.

The Wake County chapter of the North Carolina Association of Educators (NCAE), a teachers’ lobbying group, won’t support returning to classrooms until school employees receive vaccinations or the county’s two-week rolling average for positive coronavirus cases is below 5%. NCAE cites examples like Brunswick County on North Carolina’s coast, where all grade levels returned to virtual learning after transmissions occurred inside schools where students were unable to socially distance, PortCityDaily reported.

North Carolina Gov. Roy Cooper, a Democrat, is allowing schools to choose from three operating plans, including fully remote. Cooper said his priority “is to get our children back into schools physically” during a news conference on Jan. 27 when asked about the recent CDC and Duke Health studies that found students can return to in-person learning with minimal coronavirus spread.

“We know that it’s better for them there and that they learn more and they get a lot more attention,” Cooper said. “I’m going to ask local school boards and superintendents to study this data that has just come out.” 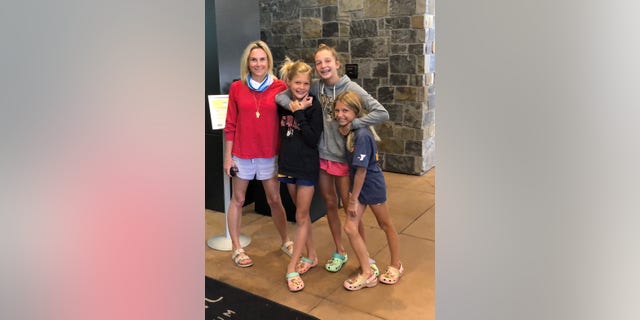 Kelly Mann (left) and her daughters. (Courtesy of Mann)

Mann said she has written to Cooper about reopening classrooms with no response. A former public school teacher who was once a member of the NCAE, Mann started the Facebook group Wake County Families and Teachers to Safely Reopen Schools to blow off steam last summer. It quickly grew to more than 5,000 members, she said.

“I don’t see Wake County schools opening this school year,” Mann said. “Schools serve more to a community than just educating. They’re that first line of action when abuse going on in the house, when a child isn’t showing up at school.”

Mann was able to get her middle daughter, a sixth-grader, into a private school but wasn’t able to find space for her fifth-grade and eighth-grade daughters.

“My eighth-grader is doing as well as she can. I see the toll of not having any interaction with others and how it’s affecting both of the two who are still remote,” Mann said.

Mann blames the NCAE for keeping many North Carolina students out of classrooms and said many parents are upset by NCAE President Tamika Kelly’s social media posts equating parents wanting to reopen schools with White privilege. 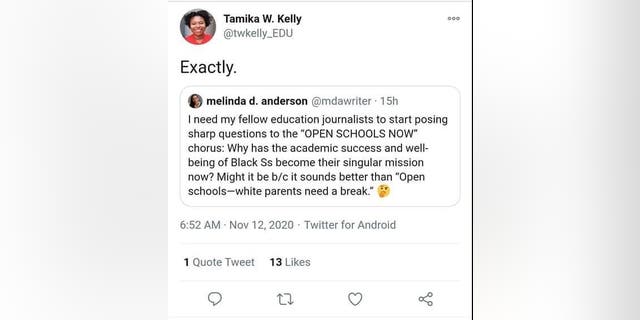 Kelly replied “exactly” to a tweet claiming that the push for in-person learning is coming from “white parents” who “need a break.”

“It’s eye-opening. Three or four months ago none of these parents had ever heard of NCAE,” Mann said. “This is the leader of the group painting us as White privilege because we want schools open. I’d say she’s privileged because she is not aware of what she’s doing to the underprivileged.”

South of Wake County in Cumberland County, mom Michelle Hallas feels for her daughter, a senior who hasn’t stepped foot in a classroom since her junior year in March. Like Mann, Hallas started a Facebook group to bring together parents who want in-person learning to be an option — and she, too, views NCAE as the “biggest obstacle.”

“They’re blaming teachers, saying teachers don’t feel safe, but that’s just not the case,” Hallas told Fox News. “I have teachers in my Facebook group and teachers I know. … Everybody I know wants to get back in the class.” 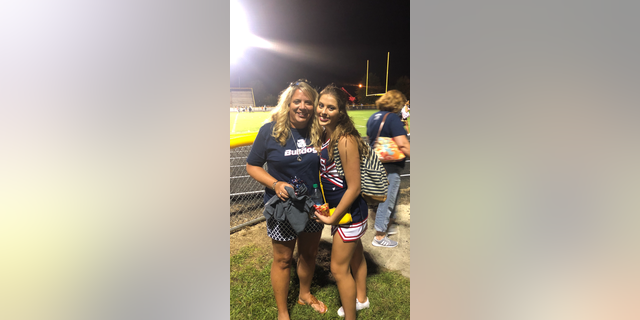 Michelle Hallas and her younger daughter, a high school student. (Courtesy of Hallas)

Hallas works for a pharmaceutical compliance company, meaning she spends her workdays in hospitals.

“I have not even had my vaccine yet and yet I work in hospitals where COVID patients are,” she said. “We live by the promise the CDC has given us that if we wear our masks, wash our hands … we’ll be safe. We want teachers to do the same.”

Fox News’ inquiries to Cooper’s office, the NCAE, Wake County Public School System and Cumberland County School System were not returned at the time of publication.