Home » World News » Palmer’s party goes round and round

Palmer’s party goes round and round 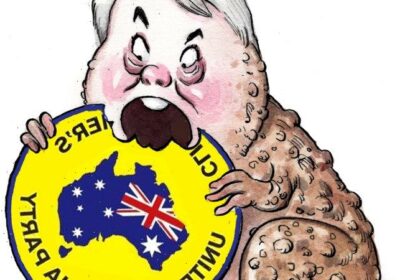 Everything old is new again in the world of mining billionaire and coronavirus misinformation purveyor Clive Palmer, whose eponymous Clive Palmer’s United Australia Party is attempting a radical rebranding. Specifically, the party, of which Palmer is chairman, is trying to drop his name from its title. 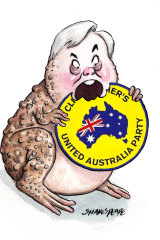 If successful, that would take the CPUAP back to where it all started in 2013, when it was controversially first registered as the United Australia Party, nicking the name of the 1930s party of prime ministers Joseph Lyons, Billy Hughes and Robert Menzies.

Since then, Clive’s party has gone through a series of names, first switching to the Palmer United Party and then Clive Palmer’s United Australia Party.

Dropping his own name is an unusual move for publicity fiend Palmer, who has spent millions on election advertising in as many places as possible in recent times.

Objectors to the change who have written to the Australian Electoral Commission include federal Labor member for Perth, Patrick Gorman, a former Kevin Rudd adviser, who claimed Palmer was attempting to hide his involvement in the party from voters in the west.

Palmer would be forgiven for thinking he’s not terribly popular in Western Australia after the front page of the state’s main newspaper depicted him as a cane toad over his claim for $30 billion in iron ore royalties from the state.

Not so, a Palmer spokesman responded, saying the party was changing names as “a reflection of our growing party membership numbers” and an official noted the original UAP had only lasted until 1945.

It went the way of the Pirate Party, which was deregistered earlier this year after falling below the minimum threshold of 500 members.

Former One Nation senator Rod Culleton’s Great Australian Party, which counts chef and conspiracy theorist Pete Evans among its candidates, is at risk of the same fate after it was given notice by the AEC over its membership count.

Nothing is ever cheap in the Eastern Suburbs, as private girls school Ascham discovered in dealing with an arboreal hazard in the form of a Moreton Bay fig at the centre of its grounds near Edgecliff Station on New South Head Road.

Ascham counts luminaries including philanthropist Gretel Packer, fashion designer Bianca Spender and media proprietor Mia Freedman among its alumni and reported $55 million of gross income in its latest annual report to the charity regulator, so it can probably afford it.

But trees at the school have caused problems before, with Ascham removing two figs in 2015 after an arborist found there was a risk that branches could drop on students and teachers.

This time, an arborist’s report said the fig was in a “reduced state of health” despite attempts to nurse it and branches could fail.

The fig’s ailments could just be a factor of time: a school-commissioned report suggests it could be 120 years old and perhaps predate the school’s occupation of the site.

Obviously, a falling branch would be a terrible shame at any school, but you can imagine the sort of outcry it would prompt at a place where CBD has previously reported on a WhatsApp group to give voice to the trials and tribulations of school life. You remember – the discussions about the “hard bits” at the end of school socks and the appropriate age to stop cutting your offspring’s cherry tomatoes?

It will be up to the good people of Woollahra Council to assess the school’s application to take out the tree.

Tuesday saw a heartwarming feat of democracy, union-style, at the Australian Council of Trade Unions triennial conference. All candidates for positions on the ACTU executive were elected unopposed.

The peak union body’s truncated triennial conference had been set to hear from Australian of the Year Grace Tame and Labor leader Anthony Albanese before comrades were forced to downsize. Curse you, coronavirus.

Essential business still went ahead, with secretary Sally McManus and president Michele O’Neil re-elected to their posts via Zoom.

The technology worked fine for the most part, although a few camera mishaps cut into the speaking time of Maritime Union of Australia secretary Paddy Crumlin, who quipped that hearing less of him “would’ve kept a few people happy”.

About three dozen union officials were elected to the ACTU’s main decision-making body, including retail union boss Gerard Dwyer, who kept his post of senior vice-president.

On preliminary figures, 23 men and 13 women were elected.

But that won’t be the end of it, thanks to the ACTU’s unusual approach to satisfying its affirmative action rule that requires 50 per cent of its executive seats to be held by women.

Rather than force any male union boss to miss out, the ACTU allocates additional seats to women officials until the 50 per cent requirement is fulfilled. Everyone’s a winner, baby.

Yesterday’s CBD referred to Bob Swan as Sarah Swan’s father. He is her stepfather.