Washington: Pablo Escobar’s hippos have become the first animals to be legally recognised as “people” by a US court.

In a legal case brought by the “community of hippopotamuses living in the Magdalena River”, the plaintiffs, known as his “cocaine hippos”, were accepted as “persons of interest”.

In the 1980s Escobar became one of the richest men in the world due to his drug trafficking empire, and purchased a variety of exotic animals for his Hacienda Napoles ranch in Colombia. 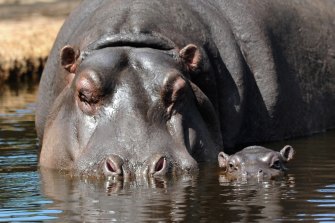 After he was shot dead by police in 1993 giraffes, zebras and flamingos were sent off to zoos but four giant hippos – one male and three female – were allowed to remain in a pond.

The so-called “cocaine hippos” have since multiplied to some 100-strong, the largest herd outside Africa, and could reach 1500 by 2040.

They are destroying the local ecosystem and are responsible for attacks on local fishermen. Last week, the Colombian government announced it had sterilised 24 of them.

The Animal Legal Defence Fund (ALDF), a US charity, has argued for the use instead of another contraceptive called PZP, which it says has “historical success” with hippos in captivity.

There is an ongoing court case in Colombia, in which the hippos are the plaintiffs.

Colombia accepts that animals can have cases brought on their behalf to protect their interests.

The ALDF wants to bring evidence on the hippos’ behalf from two experts in nonsurgical animal sterilisation, but the experts are based in Ohio in the US.

Under US law an “interested person” in a foreign legal case can apply to an American court to take depositions from experts.

The ALDF applied to the US District Court for the Southern District of Ohio, which accepted the request.

The “community of hippopotamuses living in the Magdalena River” were considered to be “interested persons” under the US law.

A spokesman for ALDF said: “In granting the application, the court recognised the hippos as legal persons.”

Stephen Wells, ALDF executive director, said: “The court’s order authorising the hippos to exercise their legal right to obtain information in the United States is a critical milestone in the [fight] to recognise that animals have enforceable rights.”

In the US animals are legally regarded as property.