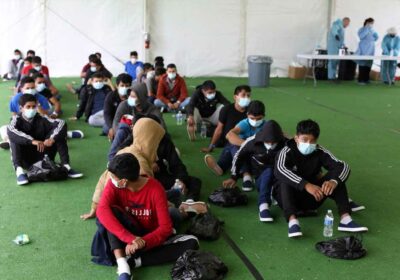 Media cheers a return to the failed Iran deal: Goodwin

Top Dems distance themselves from ‘Squad’ calls to abolish police

The federal government awarded a contract worth up to $530 million to a housing nonprofit that recently hired a Biden transition team official, according to a report on Tuesday.

The Administration for Children and Families contracted Family Endeavors in March to help manage the influx of migrant children arriving at the US-Mexico border, Axios reported.

The Texas-based organization snagged the no-bid contract just months after it tapped Andrew Lorenzen-Strait as its senior director for migrant services and federal affairs, the report said.

He was previously an adviser to the Biden-Harris transition team on Department of Homeland Security policy and staffing matters. He’s also a former Immigration and Customs Enforcement official.

ICE, an agency of DHS, recently awarded the group an $87 million no-bid contract to house migrant families in hotels in Texas and Arizona, the Washington Examiner reported last week.

Family Endeavors has no previous history as an ICE contractor. It also never previously won a prime contract from HHS, but did work with another of the agency’s vendors in 2012, 2014, 2016 and 2019, according to Axios.

The ACF contract is to provide “emergency intake” and “wrap-around care” at a temporary migrant facility in Pecos, Tx., the report said.

It could potentially be worth more than 12 times the organization’s latest reported budget of $43 million.

In a statement to Axios, Family Endeavors said its contracting work is “a continuation of services we have delivered to the migrant population since 2012.”