Home » World News » One dead, another fighting for life after crash near Melbourne Airport

One dead, another fighting for life after crash near Melbourne Airport

One person is dead and a woman is fighting for her life after a horrific crash outside Melbourne Airport on Wednesday afternoon.

Emergency services were called to the intersection of Terminal Drive and Centre Road about 2.40pm after reports a car had collided with a truck. 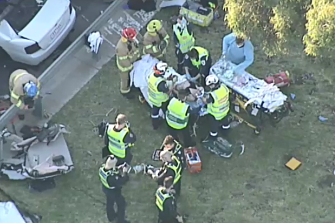 The female passenger was freed from the vehicle and taken to hospital.Credit:Nine News Melbourne

Dozens of paramedics, firefighters and police were at the scene throughout Wednesday afternoon.

A police spokesman said investigators were still trying to understand the circumstances that lead to the collision, and that their investigations were ongoing.

Anyone who witnessed the lead-up to the collision, the crash itself or has dashcam footage should contact Crime Stoppers on 1800 333 000 or submit a confidential report via www.crimestoppersvic.com.au