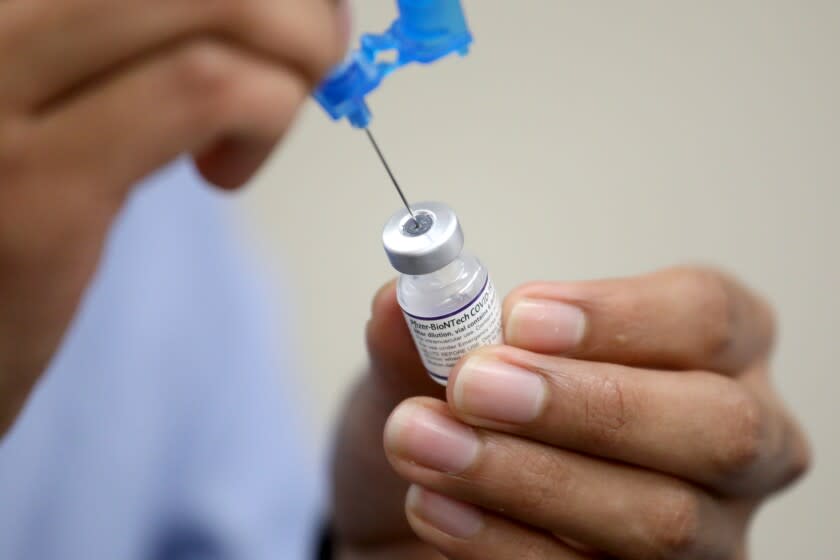 With Omicron spreading across the United States with stunning speed, California officials and experts are trying to game how the highly infectious variant of the coronavirus will spread through the state and exactly what the response should be to the threat.

There remains much unknown about Omicron, but experts say it has the potential to overwhelm hospitals, particularly in areas with low vaccination rates. It's also possible that parts of highly vaccinated coastal California might be able to withstand the variant better than inland areas, which have struggled with getting residents inoculated as well as promoting mask wearing in indoor public places.

The San Francisco Bay Area has some of the highest vaccination rates in state, and officials there believe that could help slow Omicron. By contrast, experts are especially nervous about places with low vaccination rates, like the Inland Empire and San Joaquin Valley. L.A. and Orange counties, whose vaccination rates are somewhere in between, may see an impact that falls in the middle.

One possibility is that the Bay Area will see a relatively small jump in hospitalizations; L.A. County, a medium jump and the Central Valley the highest jump, said Dr. Peter Chin-Hong, an infectious diseases expert at UC San Francisco.

That pattern would be similar to this year's Delta surge, where the San Joaquin Valley's peak summer hospitalization rate was twice as worse as Southern California's and nearly three times as bad as the Bay Area's. The San Joaquin Valley's hospitals have been overwhelmed since the Delta surge began; the Bay Area's hospitals have not sounded similar alarms.

While Omicron is expected to result in more breakthrough infections among vaccinated people compared to earlier variants — making them more vulnerable to being contagious and suffering mild symptoms — it's likely that they will largely still be protected against severe illness and death. It's unvaccinated people who will still be at highest risk for requiring hospitalization and dying.

Even before Omicron, places like Fresno County during its Delta surge was seeking help from L.A. County to transfer patients there, underscoring the Central Valley's vulnerability, Chin-Hong said. A key problem with Omicron is that it may have a higher chance of reinfecting people who previously survived a coronavirus infection but still haven't been vaccinated.

With Omicron, "natural [infection] alone doesn't seem to protect you as well," Chin-Hong said. "The Central Valley has always been hit so hard by a lot of waves," and given its relative lack of vaccination uptake, "that's going to give them less insurance for what's coming up."

But places with relatively more staffed hospital beds and higher vaccination rates will be better equipped to handle more COVID-19 patients. Chin-Hong said the Bay Area might be sufficiently equipped to handle an Omicron surge, "given high vaccination rates, increasing booster rates — at least in the older population — and acceptance of kid vaccines and adolescents generally high."

In San Francisco and Santa Clara County, 87% of residents of all ages have received at least one dose of vaccine; better than the rates for L.A. and Orange counties, which is 75%; and far ahead of the the Inland Empire and the Central Valley, where the rate is 59% in San Bernardino County and 56% in Kern County, home to Bakersfield.

There are also regional differences in uptake of vaccines among those age 5 to 11. In San Francisco, 45% of children in this age group have received at least one dose of vaccine, compared to 21% in L.A. County and 10% in San Bernardino County.

Dr. Robert Wachter, chair of the UC San Francisco Department of Medicine, said even if Omicron tends to produce less severe disease, a much higher rate of transmission could still lead to far more people sick than would be expected for earlier variants, and still result in overwhelmed hospitals. If Omicron is, for example, 30% less severe, but new cases go up by five times, "that's still awful, [with] far more hospitalizations & deaths than comparable Delta surge," Wachter wrote.

Wachter recounted a friend in New York City who had COVID-19 last year, had received three shots of an mRNA vaccine, and went to a holiday party where people were required to be vaccinated, but masks were not required. He tested positive over the weekend, but his symptoms were not serious.

Authorities have stressed vaccinations, booster shots and various safety protocols such as mask-wearing in public indoor places as the best way to fight Omicron, adding that they don't see a need for another lockdown.

Some experts say it's important to be safe but also not to overreact to an Omicron surge, such as deciding to shut down schools. Health officials across California have noted that outbreaks in K-12 schools are low, illustrating the state's successful strategy in limiting transmission at schools, in large part due to a requirement to wear masks in indoor classrooms.

"We can keep kids & teachers safe in schools," Dr. Ashish Jha, dean of the Brown University School of Public Health, tweeted. "This is not March 2020. We have vaccines."

Health officials in the Bay Area have offered a nuanced message — both urging people get boosted, while at the same time praising residents for their high rates of complying with a longstanding indoor mask mandate and high rate of vaccinations.

"When I look around the corner ahead, what I see is a deluge of Omicron," Dr. Sara Cody, the Santa Clara County public health director and health officer, said last week. Still, rather than focusing on new restrictions, "we're really focusing an all out effort to let the public know how important it is to get a booster.

In fact, UC San Francisco epidemiologist Dr. George Rutherford on Friday told his colleagues at a town hall he thought it was pretty safe to go to indoor events such as Golden State Warriors NBA games and concerts, given requirements in San Francisco that attendees of indoor events of 1,000 or more people need to be fully vaccinated to enter — a standard stricter than the state's rules, which allow unvaccinated people to enter such events as long as they show the results of a recent negative coronavirus test.

"I think those are as safe as they are going to be," Rutherford said.

In parts of the Bay Area, confidence about the region's pandemic management seemed to be high enough that state officials, in deciding to extend an indoor mask mandate statewide, allowed counties with pre-existing rules to leave some limited exceptions intact.

That meant that counties like San Francisco, Alameda and Contra Costa, which have had a local indoor mask mandate since summer, were allowed to retain a relaxed rule that allows offices and gyms to make mask wearing optional if everyone inside is fully vaccinated.

Overall, there seemed to be a sense in the Bay Area that ordering certain types of businesses to close or limiting the size of crowds at large events was an outdated strategy to control the pandemic.

Some institutions are looking at requiring booster shots. Stanford University announced that it will require eligible students to show proof of receiving a booster to the COVID-19 vaccine, unless they have a medical or religious exemption, by Jan. 31.

Early data from Britain show that vaccine effectiveness against symptomatic disease for Omicron falls to 34% six months after the second dose of the initial two-shot Pfizer vaccination series. A third Pfizer dose, however, raises that effectiveness back up to 76%, Rutherford said.

"The one thing you should take away with this from today is to go get boosted today," Rutherford said.

New developments are posing both good news and bad news.

Citing data from the University of Hong Kong, although Omicron appears to be more infectious to the airways, it appears be less infectious toward lung tissue, said Dr. Charles Chiu, an infectious disease specialist at UC San Francisco, at the town hall.

"It may be more transmissible, but once it actually affects an individual, it's possible that it's less likely that it infects lung tissue," causing the kind of breathing problems that lead to death, Chiu said.

That could help explain why the duration of hospitalization in South Africa for Omicron is shorter — three days versus seven days. "And that's probably due to the fact that … fewer people require oxygen in the ICU. But nevertheless, there will be more people coming into hospital," Chin-Hong suggested.

A potential problem could result if far too many workers are out sick at the same time, meaning officials may need to shorten the time period infected people are put under isolation to keep hospitals running.

Such changes may be needed "because we can't have everybody hunkered down for 10 days," which is the current guideline for how long a person should be isolated after testing positive, Chin-Hong said. Evidence is emerging that vaccinated people with breakthrough infections may be contagious for fewer days than unvaccinated people.

Looking forward, Chiu said the best case scenario is that Omicron would pose only a significant disruption that doesn't result in a huge peak in hospitalizations and deaths. In addition, after Omicron blows over, there's a reasonable chance that there might be enough immunity in the population so that coronavirus transmission gets low enough to minimize the risk of another variant.

But it's also possible that the coronavirus could mutate again. "This virus has thrown us for a loop so many times," Chiu said.

Dr. Kim Rhoads, associate professor of epidemiology and biostatistics at UC San Francisco, said at the town hall, that as we move into 2022, people may need to get used to the idea that there won't be a quick return to normal.

"I feel like we've been fooled," Rhoads said. A previous light at the end of the tunnel "turned out to be a freight train called Delta."