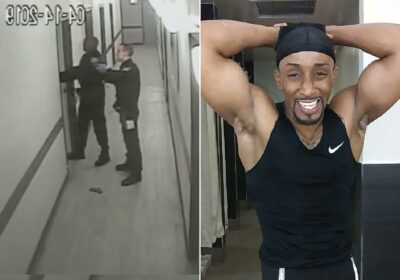 The officer who fatally shot Kawaski Trawick two years ago should be fired from the force, the Civilian Complaint Review Board told the NYPD Thursday in finding that the cop’s use of force was not justified, The Post has learned.

Thompson was charged by the board with using his Taser and gun improperly, entering the properly improperly and failing to get medical attention, sources said.

The other officer, Davis, who is more experienced and repeatedly told his partner not to use force, is also facing internal misconduct counts of improperly entering Trawick’s apartment and failing to get the man medical attention, sources said.

The board voted Wednesday night to exonerate Davis of the wrongful threat of force, sources said.

Both cops had previously been cleared of wrongdoing by the Bronx District Attorney’s Office and the NYPD.

The fatal shooting on April 14, 2019 unfolded when residents called the cops on Trawick, 32, who was walking the hallways with a stick and a knife and “acting erratically and threatening people” after he locked himself out of his apartment.

By the time cops arrived, firefighters had already helped Trawick get back inside his home.

The officers then went to his apartment, banged on his door multiple times and barged in after it opened slightly, video shows.

Trawick repeatedly asked, “Why are you in my home?” as cops ordered him to put down the bread knife.

Thompson then Tased Trawick and fatally shot him during the two-minute encounter.

Trawick’s parents, Ellen and Ricky, said they were “glad the CCRB was able to see there was wrongdoing on the part of NYPD officers Brendan Thompson and Herbert Davis for murdering our son.”

“Our son should be alive and Brendan Thompson and Herbert Davis must be fired,” they said in a statement.

The NYPD and CCRB did not immediately respond for comment.