Home » World News » No fireworks, small crowds as 2020 limps to a close

No fireworks, small crowds as 2020 limps to a close This was the way 2020 ended in Melbourne: not with a bang but a whimper.

After one of the toughest years in the city's history, there was no moment of cathartic release on New Year's Eve in the form of 14,000 kilograms of fireworks exploding from the city's high rises. 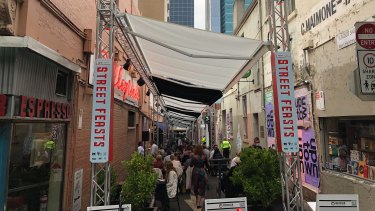 Pellegrini’s was one of the venues taking over the city lanes as part of the Street Feasts program. Credit:Photo: Tom Cowie

As it has with many other things the coronavirus put a stop to that, with authorities trying their hardest to discourage people from congregating in the CBD streets on a day when a worrying cluster dulled some people's enthusiasm to party.

The reintroduction of rules such as the wearing of masks indoors and the border closure to NSW were further reminders that the virus will not have gone away at midnight on January 1.

However people still tried to make the best of it, as some of the city's laneways were transformed into temporary al fresco dining spots as part of the City of Melbourne's Street Feasts initiative.

"It's fabulous, we got such a surprise when we came down the street," said Julie Hunt from Strathmore, who was dining under the canopy outside Pellegrini's. 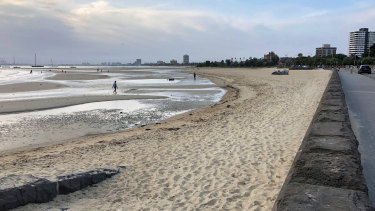 There were no heaving crowds or eager revellers securing a view of the fireworks from St Kilda beach.Credit:Photo by Tom Cowie

The inner suburbs were quiet too, as partygoers seemingly took the advice to stay home or attend a venue.

Seagulls almost outnumbered people at St Kilda Beach, with the city's most famous stretch of sand usually a magnet for picnickers on the last day of the year. Nearby pubs such as the Esplanade were doing a roaring trade.

At Edinburgh Gardens in Fitzroy North, a location known in the past for heaving parties, there was only a smattering of people on picnic blankets.

Police and security guards kept on eye on the one major gathering allowed in the park in the early evening: a big screen showing of the Paddington movie.

There was a small influx on to the city's streets closer to midnight, as lines of masked punters snaked down footpaths outside nightclubs. Police maintained a strong presence, which included officers on horseback.