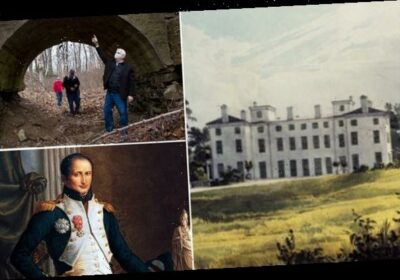 New Jersey estate of Napoleon’s brother Joseph Bonaparte – the ex-king of Spain who fled to the US after Waterloo – is sold for $4.6M and will be turned into a public park 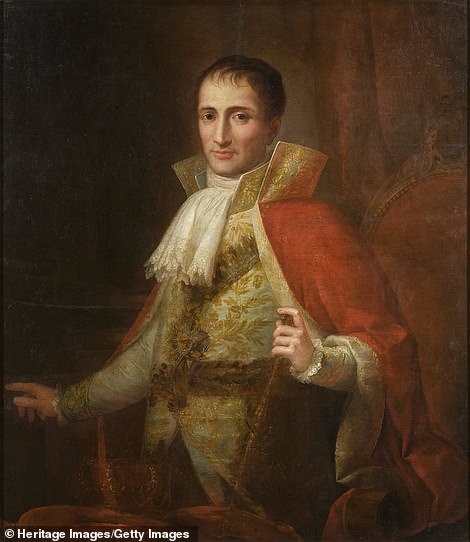 Joseph Bonaparte, a former king of Spain and Naples, fled from Europe after his emperor brother Napoleon’s defeat at the Battle of Waterloo in 1815 and landed in Bordentown, New Jersey, where he built a lavish estate called Point Breeze. Joseph is pictured in a portrait from the early 19th century

New Jersey is known for many things: stunning beaches, luscious tomatoes, Bruce Springsteen and Atlantic City. Now, one small town is working to make the state synonymous with something else – European royalty.

The Garden State was once home to French emperor Napoleon Bonaparte’s older brother, Joseph Bonaparte, who settled there in the early 19th century and built a lavish estate called Point Breeze in the Bordentown in 1816.

While the sprawling residence is no longer standing, city and state officials recently teamed up with preservationists to purchase the 60-acre plot for $4.6million and turn it into a public park to preserve Bordentown’s ties to the Bonaparte family and Joseph, a former king of Naples and Spain.

‘There’s a real opportunity to celebrate the history and at the same time make this very relevant to people today who want to come and walk on the trails, learn about the land and possibly even garden on the property,’ Linda Mead, the president of D&R Greenway, the land preservation trust that helped arrange the sale of the property, told the New York Times.

Joseph fled from Europe after his brother Napoleon’s defeat at the Battle of Waterloo in 1815 and landed in Bordentown, home to about 4,000 people back then and still today.

The former king, who would have been about 48 years old at the time, quickly set to work building Point Breeze in the small town that sits right between New York City and Philadelphia, about nine miles south of Trenton. 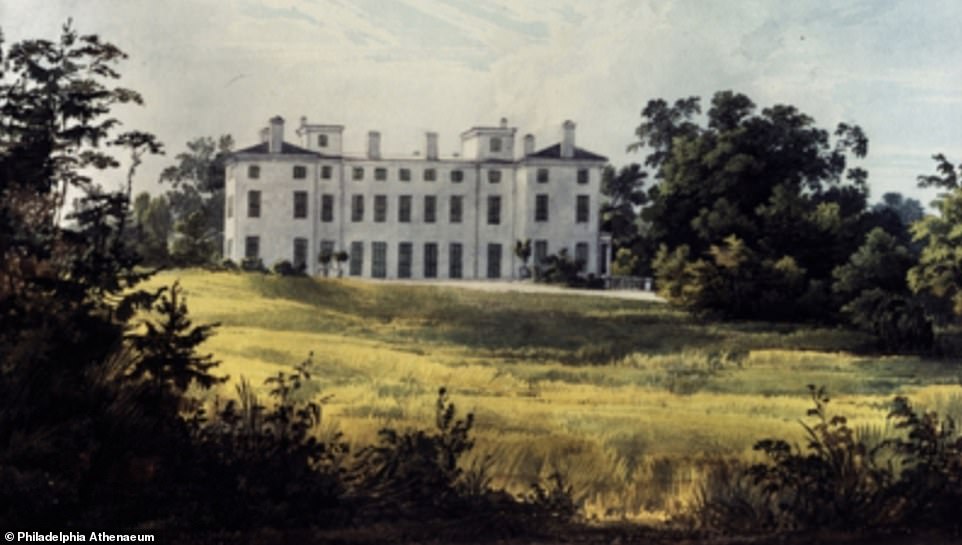 Joseph built a 38,000-square-foot mansion atop a hill on his 60-acre property, so he could be on the lookout for any hostile forces approaching. Under the grounds there was a maze of tunnels in case Joseph needed to escape to the nearby creek. The home is pictured in an undated image from the Athenaeum of Philadelphia museum 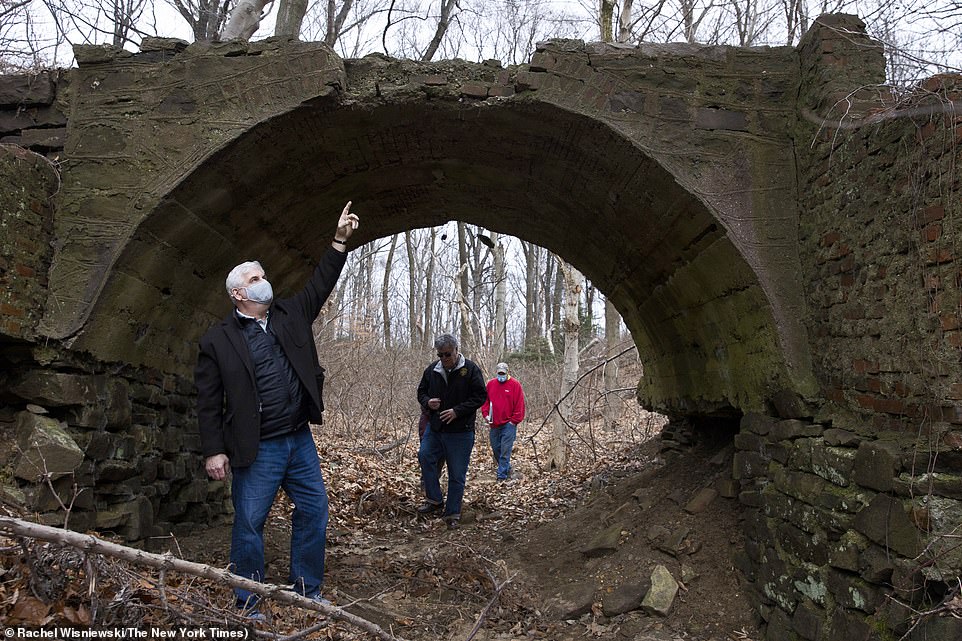 While the sprawling residence is no longer standing, city and state officials recently teamed up with preservationists to purchase the 60-acre plot for $4.6million and turn it into a public park to preserve Bordentown’s ties to the Bonaparte family. Pictured: Peter Tucci, who has spend years collecting Bonaparte artifacts, tours what’s left of Point Breeze on January 15

He set the house on top of a hill so that he could keep watch for hostile forces, and dug a maze of tunnels under the property in case he needed to escape to the nearby Crosswicks Creek, which feeds into the Delaware River.

At the heart of the property was a mansion fit for a former king, spanning nearly 38,000-square-feet across three stories. It was believed to be the second-largest home in the US at the time, behind the White House.

The residence featured stunning amenities including a vast wine cellar, 8,000-book library and an art collection complete with the Spanish crown jewels and paintings by Jacques-Louis David, Rembrandt and Goya. 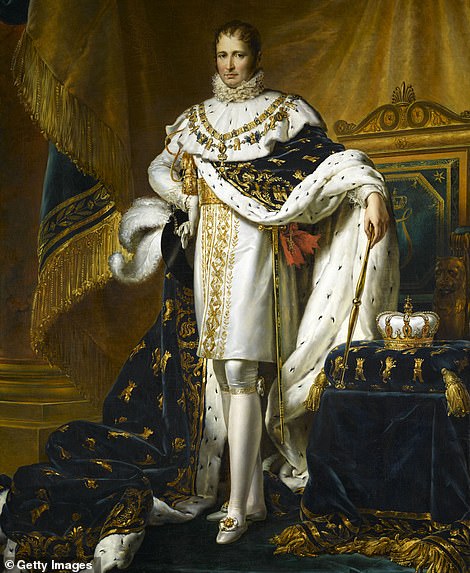 The grounds were equally impressive, boasting lush sculpture gardens, stables, a gardener’s house and a lake that Joseph formed by damming a nearby creek.

He lived there for about 23 years before leaving New Jersey permanently in 1839 and moving back to Europe.

The property gradually lost its luster as it was passed through different owners who didn’t show much interest in preserving it.

Today, all that’s left of Joseph’s original architecture are old foundations, collapsed tunnels, the gardener’s house and a brick bridge.

Its most recent owner was the Society of the Divine Word, a Catholic missionary organization that took over the property in 1941 and used it to house semi-retired clergymen.

D&R Greenway, the land trust, teamed up with Bordentown and the state two years ago in hopes of giving the property a new life, and on December 18 they snagged the property for $4.6million.

The property is set to serve as the new heart of Bordentown, with both its city hall and its police station housed in buildings that were erected by people who owned the land after Joseph.

The only remaining building from Joseph’s time at the estate – the gardener’s house, will be turned into a museum chronicling the history of the land. 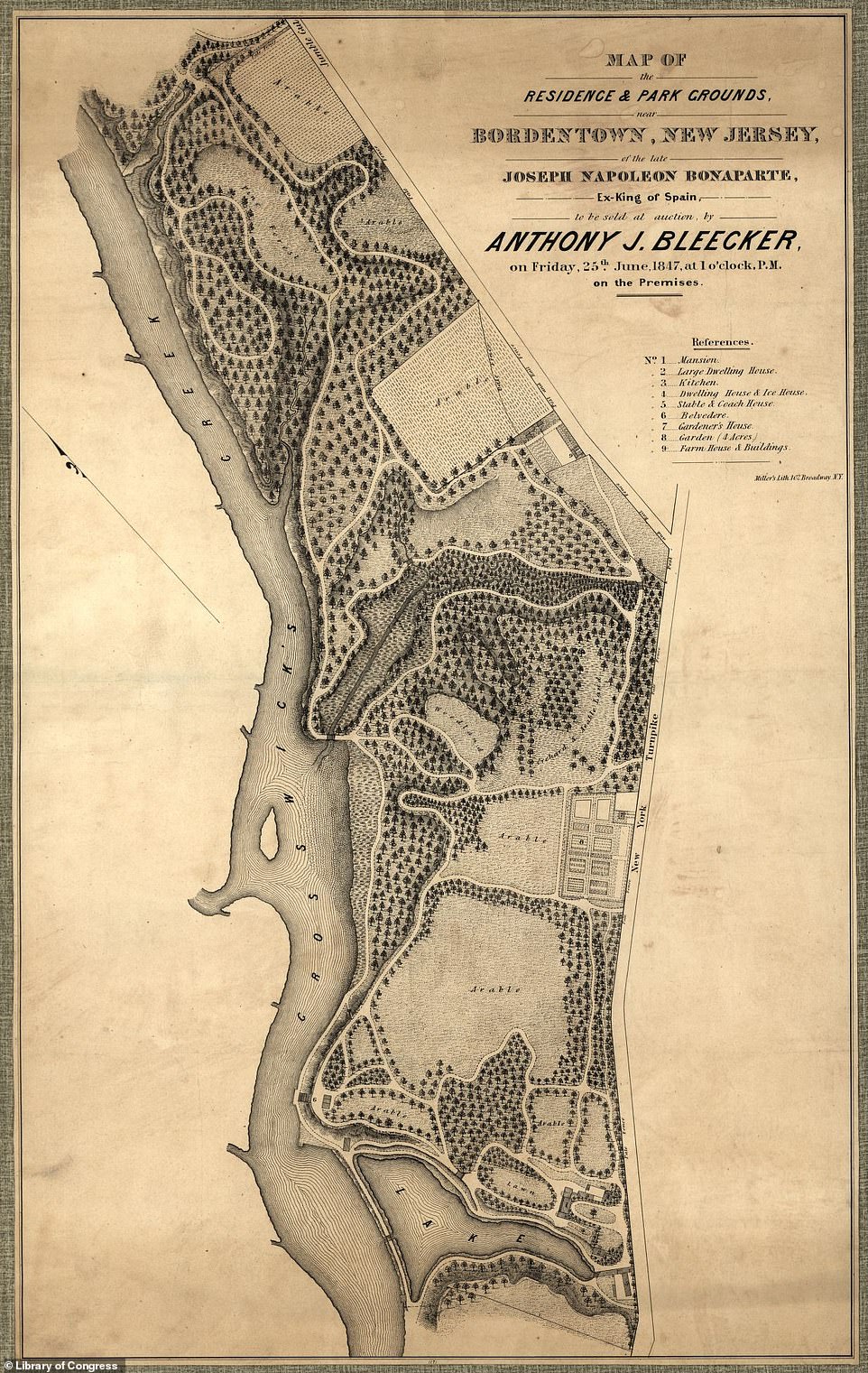 The map above was drawn up for a sale of Point Breeze after Joseph’s death in 1844. The property gradually lost its luster as it was passed through different owners who didn’t show much interest in preserving it 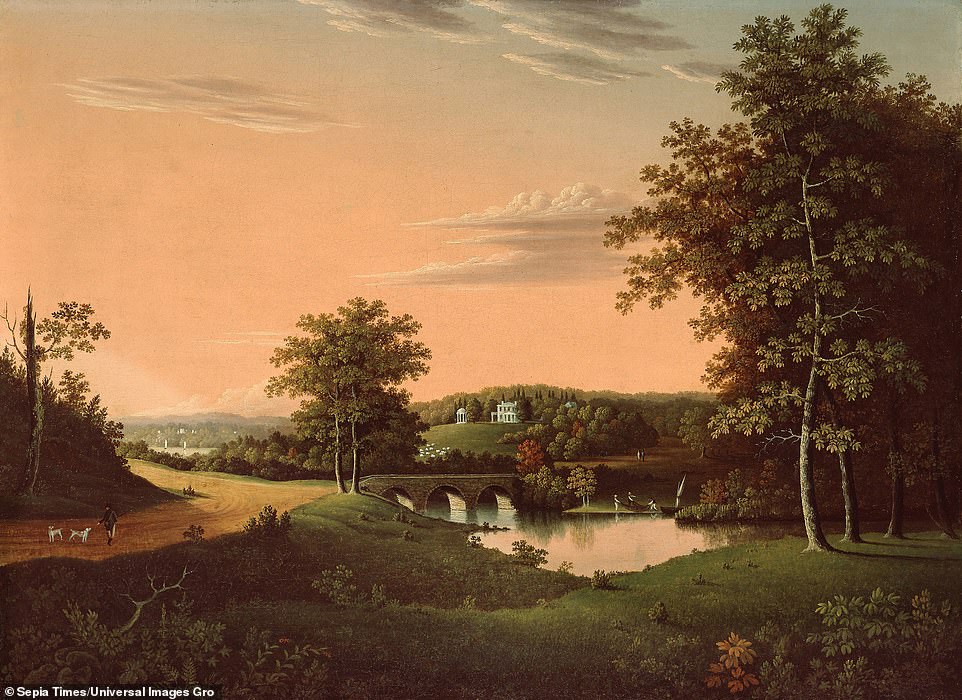 Peter Tucci, 59, is set to provide the bulk of the artifacts for the museum from a personal collection of Bonaparte memorabilia he’s spent years – and roughly $200,000, by his estimate – cultivating.

Tucci, who works as a lawyer in New Hope, Pennsylvania, about 25 miles from Bordentown, said his fascination with Joseph began about 25 years ago when he came across a magazine article about the former royal’s ties to the area.

‘That little article’s cost me a lot of money,’ he told the Times. ‘But it’s led me down a lot of interesting paths.’

It was Tucci who helped come up with the idea of purchasing the land for the city, after he met some Divine Word priests who were living at Point Breeze.

When he learned that Divine Word was thinking about selling the estate because the upkeep was too expensive, Tucci approached D&R Greenway about buying it in late 2018.

Mead, the trust’s president, then approached city and state officials about coming on board with the purchase.

D&R Greenway faced fierce competition over the land, Mead said, telling the Times: ‘There were literally developers breathing down our neck.’

But after gaining approval from the society’s leadership in Rome, the Divine Word closed the multi million-dollar deal with D&R Greenway, Bordentown and New Jersey, with the state providing the bulk of the funding.

Father Quang Duc Dinh, provincial superior of Divine Word’s Chicago Province, told the Times that the society chose the buyers based on their future plans for the land.

‘We chose to protect the historical and open nature of this beautiful property,’ he said.

Bordentown’s mayor, James E Lynch Jr, said residents were relieved that Point Breeze would be turned into a park instead of a housing development or warehouse, as some of the potential buyers had proposed.

‘Divine Word could have sold this property to other entities for a significant amount of money more, and they chose to leave this property the way they found it,’ Lynch told the Times. 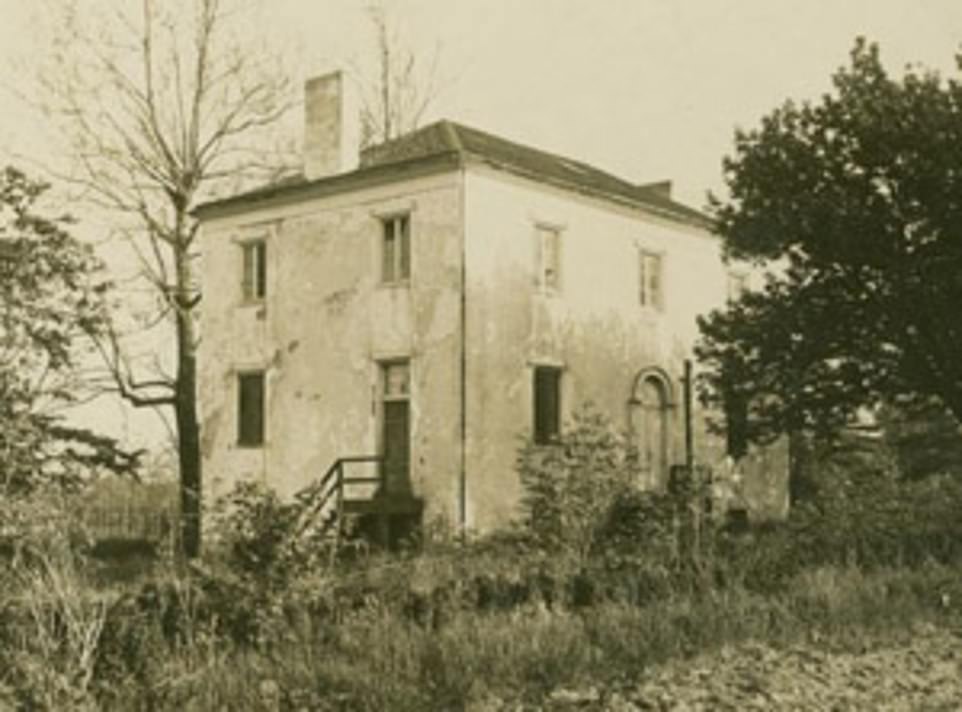 This building, known as gardener’s house, is the sole remaining structure from the Bonaparte era at Point Breeze 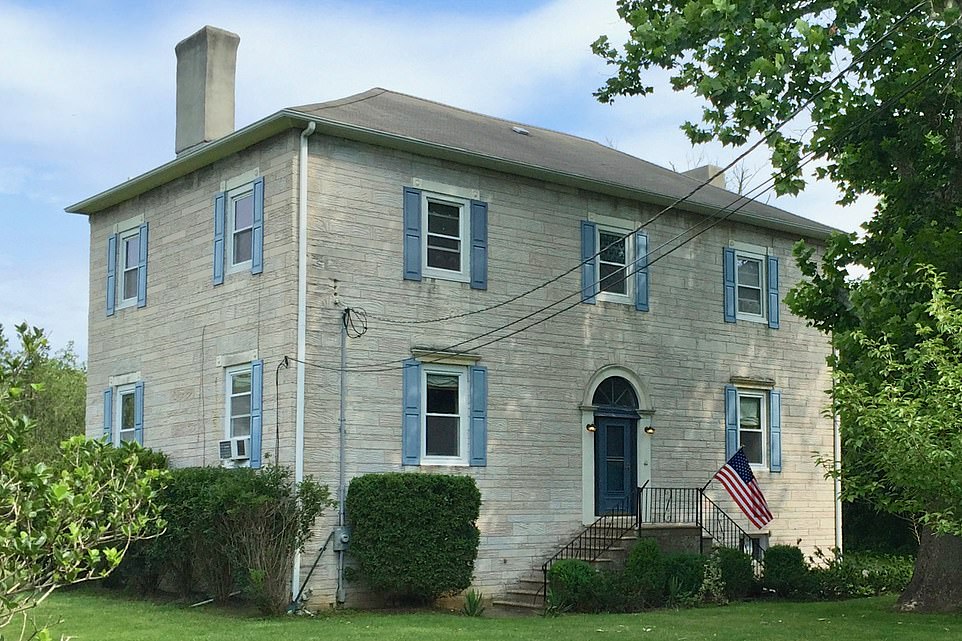 Mead and Tucci said they are hopeful that the museum will help spread Joseph’s story more widely, beyond the Bordentown residents who are well acquainted with it.

‘I think people will come from all over to visit,’ Mead said. ‘There are so many stories to be told.’

Biographer Patricia Tyson Stroud chronicled Joseph’s experience in the US in her 2005 book, The Man Who Had Been King: The American Exile of Napoleon’s Brother Joseph.

The book tells of how Joseph’s original mansion burned down in 1820. The cause of the fire remains unclear – with some historians suggesting it was an accident while others theorized it was arson intended destroy copies of Joseph’s correspondence with Napoleon.

After the fire, Joseph wrote a letter thanking neighbors rushed to help salvage priceless items from the inferno, which was translated from French and published in newspapers.

‘This event has proved to me how much the inhabitants of Bordentown appreciate the interests I have always felt for them; and shows that men, in general, are good,’ he wrote. 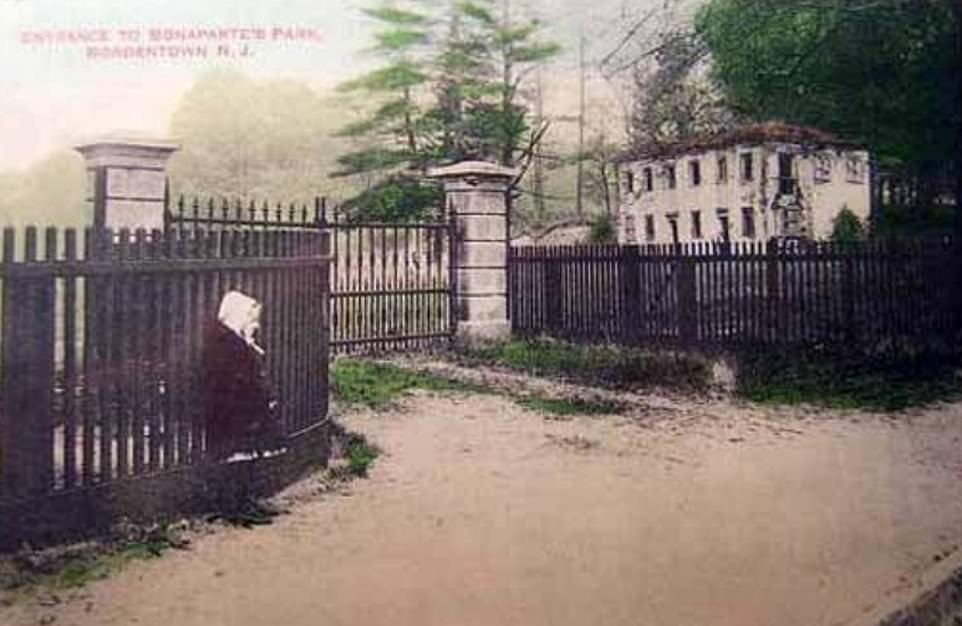 Joseph replaced the torched mansion with a second one that was even more impressive. He moved to London in 1832 and visited Point Breeze regularly until leaving for good in 1839 and settling in Italy, where he died aged 76 in 1844.

Joseph’s second mansion was torn down after his death when British diplomat Henry Beckett bought the property in 1850 and replaced the structure with an Italian villa.

But Joseph’s legacy will live on at the estate, thanks to the care and consideration of Tucci, Mead, the residents of Bordentown and state of New Jersey. 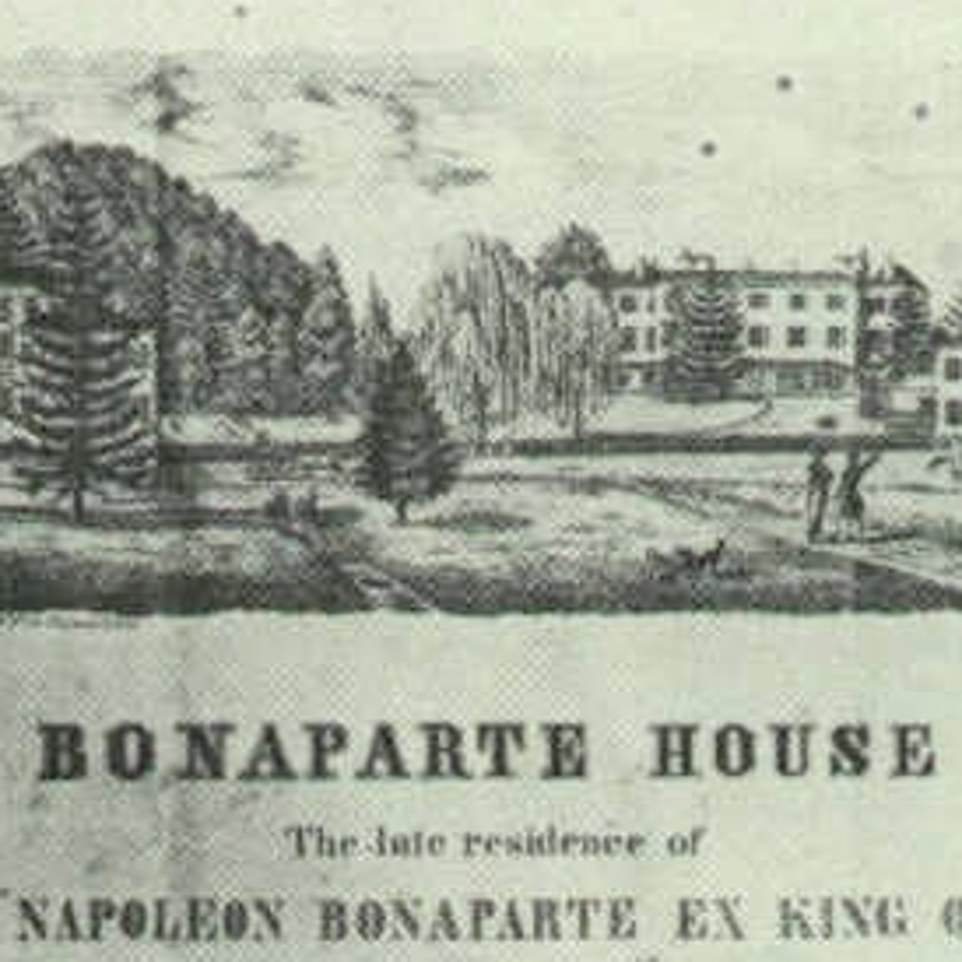