The NHS is setting up designated ‘Covid-free’ hospitals around England in preparation for a second wave of coronavirus, according to reports.

Hospital bosses are thought to be desperate to avoid the situation they faced in March, when patients without Covid-19 fell by the wayside.

A drive to ‘protect the NHS’ when the virus first took off in spring this year led to thousands of routine operations and appointments being cancelled and postponed en masse.

As a result, England’s surgery waiting list has hit a record high and cancer charities have warned of a ‘ticking time-bomb’ of undiagnosed disease.

Now, as cases are on the rise going into the autumn, NHS chiefs are planning to set aside ‘clean’ hospitals to ensure normal procedures can keep going through a second peak in Covid-19 infections and deaths.

Smaller hospitals in cities are likely to refuse to take any coronavirus patients at all so they can safely carry on with normal healthcare, The Guardian reports.

But the same may not be possible in more rural areas where inpatient hospitals are often smaller and more spaced out. It is not yet known which hospitals could be free of coronavirus patients, but Whittington Hospital in London is expected to be one. 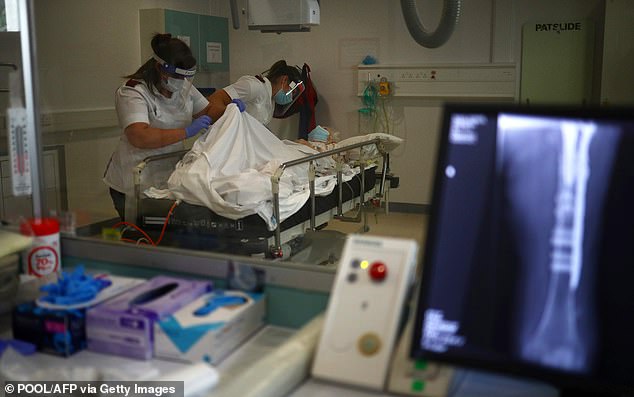 Hospitals are under pressure to carry on routine healthcare even if they start to see a rise in coronavirus infections (Pictured: Radiologists in an X-ray department in Blackburn, North West England)

‘For perfectly understandable reasons people didn’t come, so we don’t want that to happen again,’ one unnamed NHS executive told The Guardian.

‘So this time round we need to be more visibly open and let people know that much more elective care is available so they will access it for help with things like cancer.’

Another explained: ‘Some hospitals will do elective work and nothing else, others will do a combination of electives and also have Covid-positive patients in their ICU [intensive care unit].’

The move is being made in a bid to keep the NHS running even if the number of coronavirus patients admitted to hospitals surges again.

Hospital admissions remain low in England – there were 205 on Friday, compared to 3,099 on April 1, at the peak of the outbreak – but they’re rising.

The daily average number of people being admitted has risen from 59 to 178 in the past two weeks and there are now at least 138 people on ventilators in intensive care, up from a low of 61 on August 8.

When the crisis first hit in March, NHS hospitals were ordered to clear their wards to make way for an influx of people with the disease.

Images emerging from disaster-hit northern Italy, of patients being treated in corridors, had the Government in panic mode and caused hospitals to cease all procedures and appointments that weren’t urgent.

As a result, the waiting list for routine operations – which include hip and knee replacements, cataracts, and some cancer treatments – is longer than ever.

One in 50 NHS patients have now been waiting a year or more for planned surgery due to treatment delays caused by coronavirus.

NHS England data shows 83,000 patients (2.1 per cent of the total) referred for routine operations have still not been treated 52 weeks later.

Statistics also show the number of those waiting for ops for more than 18 weeks – the NHS target time – is at a 12-year high, with more than two million Britons now overdue.

Hospitals are struggling to get through the slog of patients waiting for ops because they shut down all non-emergency treatment for months during the crisis. They are still only running at a fraction of their usual capacity.

There are currently four million people on waiting lists for elective surgery but NHS bosses expect that number to grow to a record 10million by the end of the year. 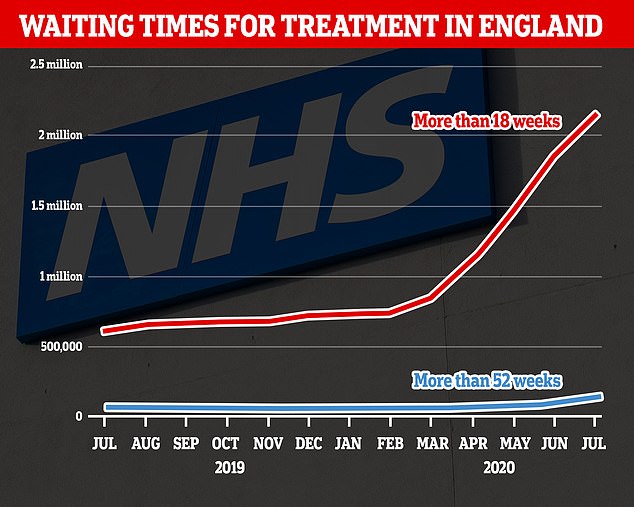 One in 50 NHS patients have now been waiting a year or more for planned surgery. The number of those waiting for elective ops for more than 18 weeks is at a 12-year high, with more than two million Britons now overdue 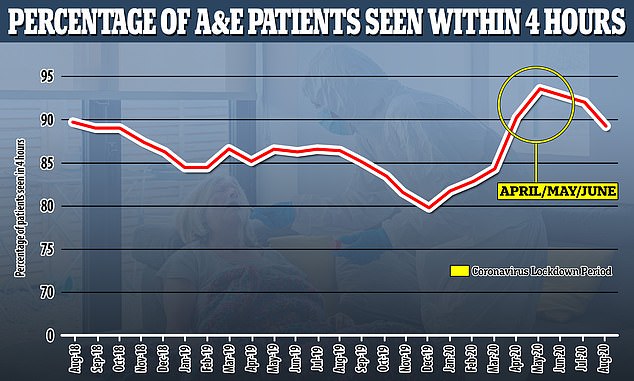 A&E waiting times have also started to rise again now that more people are coming forward for treatment. Performance times improved during lockdown (shown by more than 90% of people being seen within four hours) but this is falling again as people return to using normal healthcare 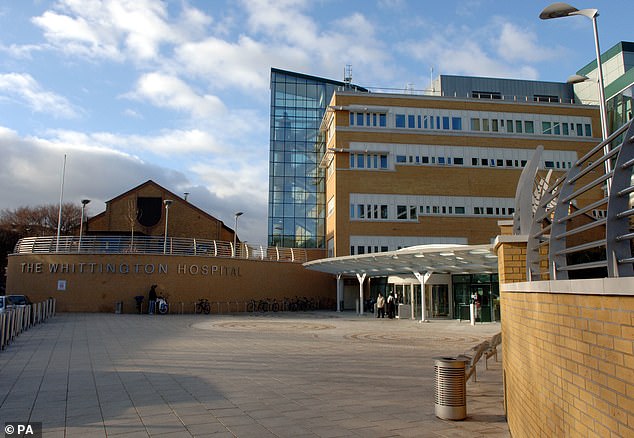 Whittington Hospital, near Hampstead Heath in north London, is one expected to be designated free of coronavirus patients

The plans revealed by The Guardian will mean that cities could have entire Covid-free hospitals, which will not admit any patients with the infectious disease, while smaller NHS trusts may have cordoned off areas for coronavirus patients.

Whittington Hospital, near Hampstead Heath in north London, is one expected to be designated free of coronavirus patients.

NHS SURGEONS ‘ONLY WORKING AT 50% CAPACITY’ BECAUSE OF COVID-19

NHS surgeons are only working at around 50 per cent capacity in the wake of the Covid-19 pandemic, despite record numbers of people on the waiting list for routine treatment.

Professor Neil Mortensen, president of the the Royal College of Surgeons, revealed surgeons ‘didn’t have much to do’ during the lockdown, as routine operations were cancelled to make room for an expected swarm of Covid-19 patients.

But they are struggling to get back to pre-coronavirus activity levels, despite barely any infected patients being in hospital. Surgeons say infection control measures and a lack of testing have left them unable to attack the backlog.

Professor Mortensen told The Telegraph: ‘Most surgeons would say productivity is around half what it was before.’

He told the newspaper that there were obstacles in restoring services to levels seen before Covid-19, which experts say is needed to clear the backlog. Health bosses fear up to 10million patients will be left waiting for treatment by this winter.

A lack of routine testing for NHS staff is hindering efforts to create ‘Covid-free’ zones in hospitals, he said.

And doctors have previously warned social distancing in hospitals will mean fewer patients can be admitted at any given time.

Covid-19 patients near hospital would instead be cared for at University College London Hospital or the Royal Free, further south in the city.

Saffron Cordery, deputy chief executive of NHS Providers, which represents hospitals and ambulance services, said: ‘This time round it makes sense to put arrangements in place to ensure that as much routine care as possible can continue, including identifying Covid and non-Covid sites.

‘This approach can reduce the impact of necessary but burdensome infection control measures, such as deeper and more frequent cleaning and the need to wear and change cumbersome protective equipment, which should mean that there is greater capacity to treat and care for patients.

‘Much has been learnt since the first wave of the pandemic.’

Layla McCay, director at the NHS Confederation, added: ‘Whilst it was necessary to put elective treatment on hold during the spring peak of Covid-19, it is now important that we also try to resume normal services as far as possible.

‘The backlog stands at a record high and so finding innovative and creative ways to meet demand will be key, particularly as we head towards a turbulent winter period.’

The catastrophic impact of coronavirus patients that politicians and health chiefs feared in March never fully materialised as the NHS managed to cope with the virus.

Little was known when the disease first emerged, which left officials fearful of the toll it would take, but treatments have improved since and survival rates are higher.

Ten per cent more of Britain’s sickest coronavirus patients are surviving than at the start of the pandemic.

Analysis of NHS records shows that 44 per cent of intensive care admissions were dying of the virus when the pandemic first spiralled out of control in March.

The Intensive Care National Audit and Research Centre (ICNARC), which conducted the review, said this had fallen to 34 per cent by July.

The ICNARC report found medics are far less quick to put patients on invasive and potentially-damaging ventilators amid concerns they could make the illness worse.

It’s hoped survival rates will improve further still after a number of cheap steroids, including dexamethasone and hydrocortisone, were proven to treat severe Covid.

Hospitals are also far less busy than they were in April and May, meaning doctors and nurses can spend more time with virus patients. Staff sickness rates are also lower.

Covid-19 transmission in the community has plummeted, with around 100 people being hospitalised with the disease every day compared to 4,000 in April.

And because the NHS turfed out tens of thousands of patients to make room for Covid-19 admissions, hospitals are still running at very limited capacity.