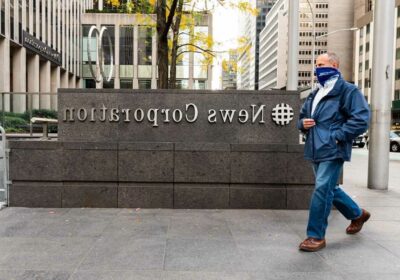 News Corp. agrees to three-year deal with Facebook in Australia

News Corp. beat Wall Street’s expectations for the quarter ended in March as it moved toward its most profitable year since it split off its entertainment arm in 2013.

The company posted third-quarter revenues of $2.34 billion, up 3 percent jump over last year — beatings analysts’ expectations for revenue of $2.19 billion.

The publisher of the Wall Street Journal and the New York Post posted net income of $96 million, reversing a $1 billion net loss from a year ago tied to a $1.1 billion impairment charge. Adjusted earnings per share rose to 9 cents from 3 cents. Wall Street had been expecting 6 cents.

The $275 million acquisition of Investors Business Daily from O’Neil Capital Management announced last month has been finalized, the company said. The operation will continue to be based in Los Angeles, operated by Dow Jones.

The acquisition of the consumer books division of Houghton Mifflin Harcourt is still pending.

The company also said it completed “landmark” revenue-sharing agreements with Google and Facebook, although the details are still being hammered out.

And it successfully wrapped up its private placement bond offering, which was upped last month to $1 billion from $750 million.

“The financial year is on a trajectory to be the most profitable since our reincarnation in 2013,” said CEO Robert Thomson. “This highlights the transformed character of the company, with improved revenue performance and a 23 percent increase in profitability in the third quarter.”

He said the digital real estate services from Move, which operates of Realtor.com, grew revenue by 37 percent and boasted a 60-percent increase in users to 100 million in March. At Dow Jones, which operates the Wall Street Journal and Baron’s, digital revenue made up 74 percent of the total. Harper Collins book publisher revenues rose 19 percent.

The results were partially by offset lower revenues from its News Media segment, primarily driven by the sale of its coupon business News America Marketing, as well as weakness in print advertising and closure of regional and community newspapers in Australia.