New York state coronavirus numbers soar by 9,298 to 75,795 and deaths rise by 332 to 1550 as Gov. Cuomo admits ‘no one knows’ when the crisis will be over and says ‘we underestimated’ deadly virus

New York state now has 75,795 cases of coronavirus – an increase of 9,298 since Monday – and 1550 have died, Governor Andrew Cuomo revealed on Tuesday as he admitted ‘no one knows’ when the pandemic will end and said the entire country ‘underestimated it’.

Speaking at a wide-ranging press conference on Tuesday, Gov. Cuomo told of how he was unifying the state’s private and public healthcare systems to operate as one before the pandemic ‘apex’ in the state hits.

He admitted he does not know when it will come and that data projections he looks at suggest it could happen anytime between seven and 21 days from now.

The death toll across the state of New York rose by 332 overnight and is not yet showing signs of slowing down.

The new numbers for how many new cases and new deaths there are in New York City have not yet been given.

Gov. Cuomo told people to settle in for a longer period of crisis than they were anticipating and said ‘we still have to come back down the other side of the mountain’ even after the peak happens.

He also spoke of his brother, CNN anchor Chris Cuomo, who has tested positive for the virus and is now self-quarantining in his basement. 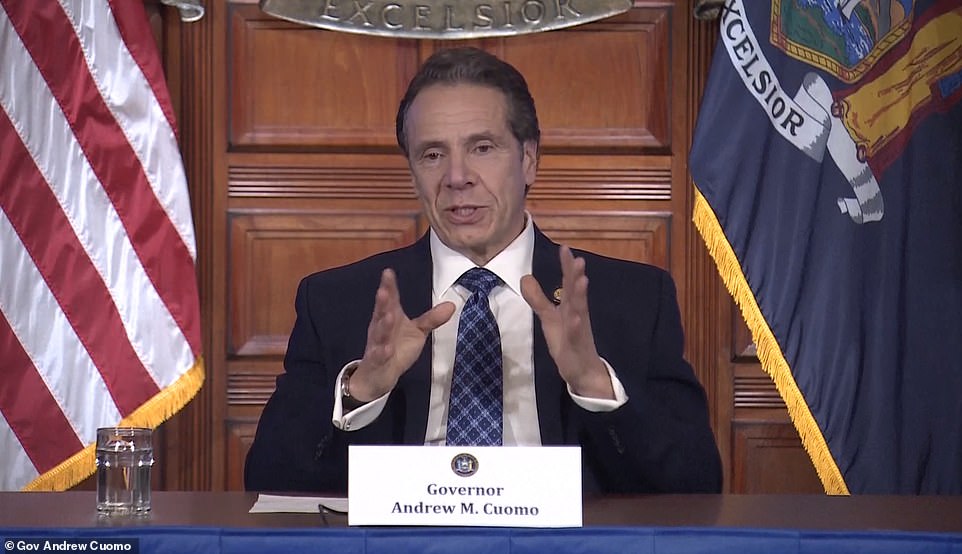 New York Gov. Andrew Cuomo on Tuesday gave a wide-ranging press conference and said he still did not know when the coronavirus pandemic would peak 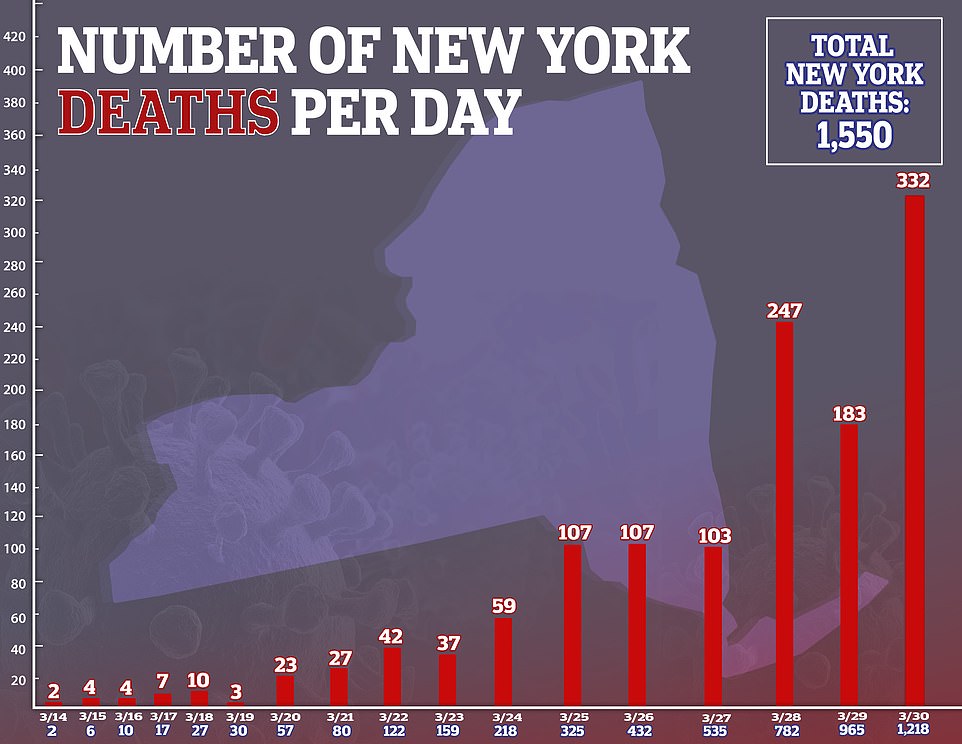 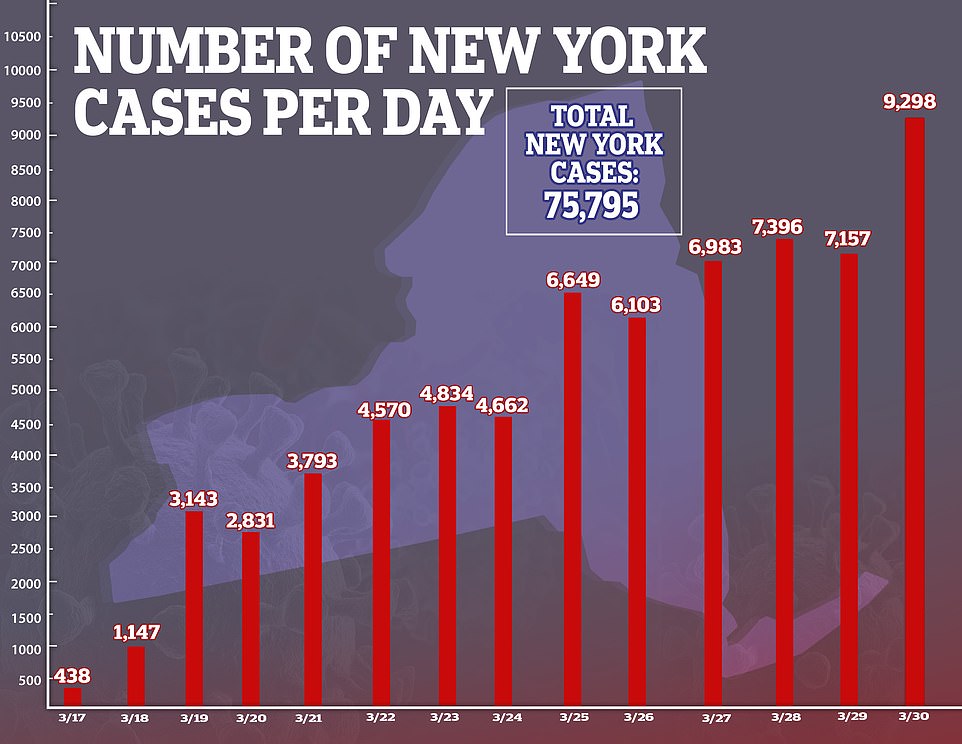 Cuomo said the data is uneven and ‘bouncing’ so where it appears the death rates may be slowing, they are not yet.

‘It’s an imperfect reporting mechanism but the basic line is still up. We’re still going up,’ he said, adding that he was speaking to every expert he could find to rely on their projections and not ‘opine’ over what may happen.

He said he was ‘tired’ of being ‘behind’ the virus, adding: ‘We’ve been behind this virus from day one. The virus was in China. Unless we assume some immune system variation with Asian people, it was coming here.

‘You don’t win playing catch up. We have to get ahead of it.’

He also said it was foolish to ‘underestimate your opponent’, continuing: ‘We underestimated this virus. It’s more powerful and dangerous than we anticipated.’

Cuomo said the ‘next battle’ will be the apex of cases and deaths but he does not know when it will hit.

‘We need a social acceptance of the time expectation. We’re all anxious, fatigued – everybody wants to know one thing – when is it over? Nobody knows.

‘You can have a hypothesis, you can have an opinion, but nobody knows. I can say this – it is not going to be soon.

‘If our apex is 14-21 days, that’s our apex. You then have to come down the other side of the mountain so calibrate yourself and your expectations so you’re not disappointed every morning when you get up.

‘When is the apex? That is the $65,000 question. We have literally 5 models that we look at. It’s true to say almost no two are the same. The range on the apex is somewhere between seven to 21 days,’ he said.

Central to Cuomo’s plan to centralize the hospital systems to do away with the notion of public and private healthcare and make everyone share everything. 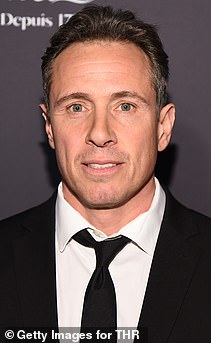 Cuomo’s brother Chris, a CNN anchor, has tested positive for the virus

The CNN host revealed his diagnosis on Tuesday saying he had been exposed in recent days to people who had subsequently tested positive for COVID-19.

Cuomo, who said he started suffering from a fever, chills and a shortness of breath, is now quarantining himself away from his wife and children in the basement of his home.

He said he will be filming his nightly CNN show from his basement.

‘I just found out that I am positive for coronavirus. I have been exposed to people in recent days who have subsequently tested positive and I had fever, chills and shortness of breath,’ Cuomo tweeted on Tuesday.

‘I just hope I didn’t give it to the kids and Cristina. That would make me feel worse than this illness. I am quarantined in my basement (which actually makes the rest of the family seem pleased!) I will do my shows from here. ‘We will all beat this by being smart and tough and united.’

Gov. Cuomo said of it the diagnosis on Tuesday that it proved the virus was the ‘great equalizer’.

‘He is going to be fine, he’s young and in good shape, strong, not as strong as he thinks, but he will be fine.

‘But there’s a lesson in this. He’s an essential worker – a member of the press. He’s been out there. You go out there, the chance you get effected is very high.’

He said their mother had been in contact with Chris two weeks ago after she went to his home – and that he had advised his brother against having her stay there due to the risks for elderly and sick people.

‘My mother was at his house and I said that is a mistake. My mother is… older and she’s healthy but I said you can’t have mom at the house,’ Gov Cuomo said.

‘He said ‘no mom is lonely, she wants to be at the house. I feel bad she’s cooped up at the apartment’. I said I do too but you bring her to the house you expose her to a lot of things. You could expose mom to the virus.

‘We had a whole discussion. If he was exposed, chances are she may have been exposed. Then we’d be looking at a different situation than my brother sitting in his basement for two weeks.

‘It’s my family, your family – it’s all of our families.

‘This virus is that insidious. We have to keep that in mind… remember who is vulnerable here and protect them.’

He said he had a tense meeting on Monday with the leaders of private hospitals which ordinarily profit from a surge in patients and that he nearly ‘didn’t make it out’ of it because they were so angry at what he was instructing.

‘The healthcare system is a chain. It breaks anywhere, it breaks everywhere. That has to be our mentality,’ he said.

He referred to the ‘commercialization’ of the topic as ‘garbage’ and said ‘sometimes the emergency has to happen to enforce the change.’

‘We’re sending out a rule today that says, I want to know what your inventory is because we really need to share; everybody put everything in the middle of the table, in a pot and then we’ll distribute it.

‘We have to get better and faster at transferring patients. A perfect system is everyone’s at 80 percent not some people at 40 percent and some are at 110 percent. That’s not the way it’s organized right now.

‘You almost have to shock the system into saying OK we’re really going to operate as one.

‘No hospital is going to say I want to be over capacity. They didn’t have the cooperation or the system to call someone up and say, I’m drowning. I need to have somebody else accept 150 patients.

‘That’s going to have to be managed into the system.  Normally you have them fighting for patients because patients are revenue.

‘Sometimes you need the emergency to enforce change. You are violating basic commercial rules here and business rules and practices; to override all that garbage,’ he said.

Since issuing a call to action for retired nurses and doctors to come back to work, 78,000 people have volunteered.

‘We have now, a few days ago we put out to ask retirees, we have now 78,000 people who said they would help; God bless the state of NY and god bless humanity,’ he said.

He is urging other states to help him now so that he can help them later.

‘It’s unity. Let’s help each other. New York needs help now. This is going to be a rolling wave across the country; New York then Detroit then New Orleans then California 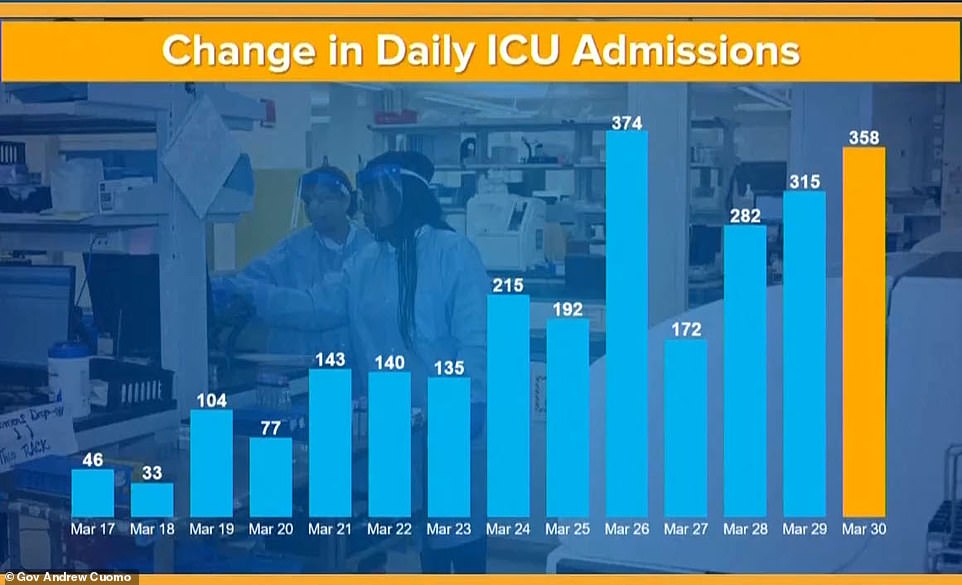 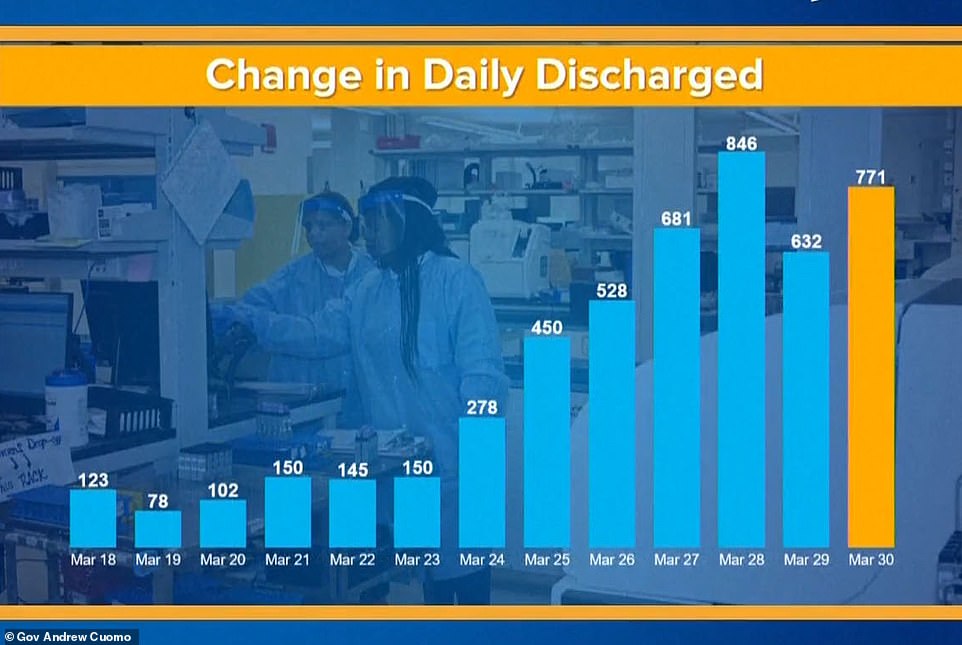 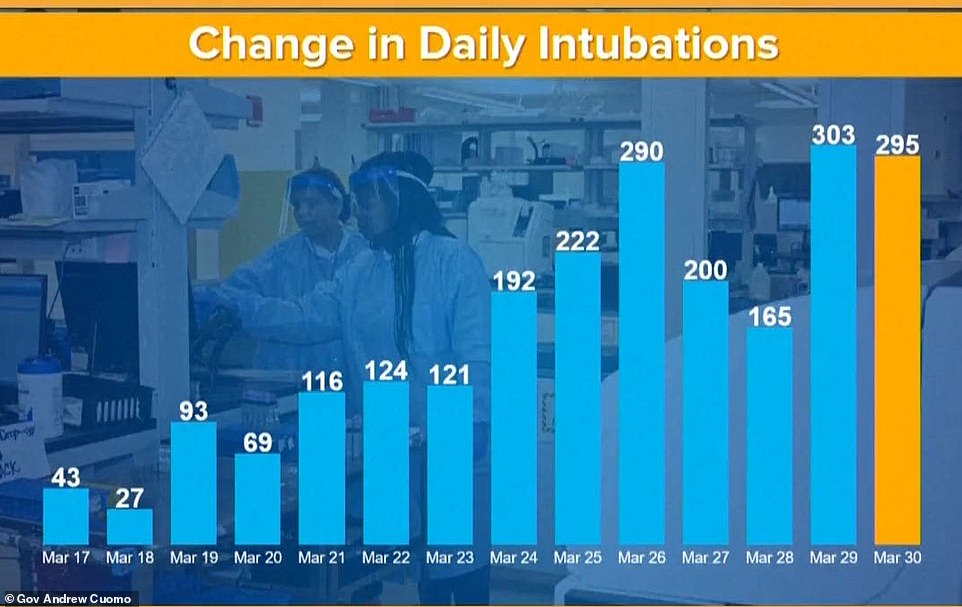 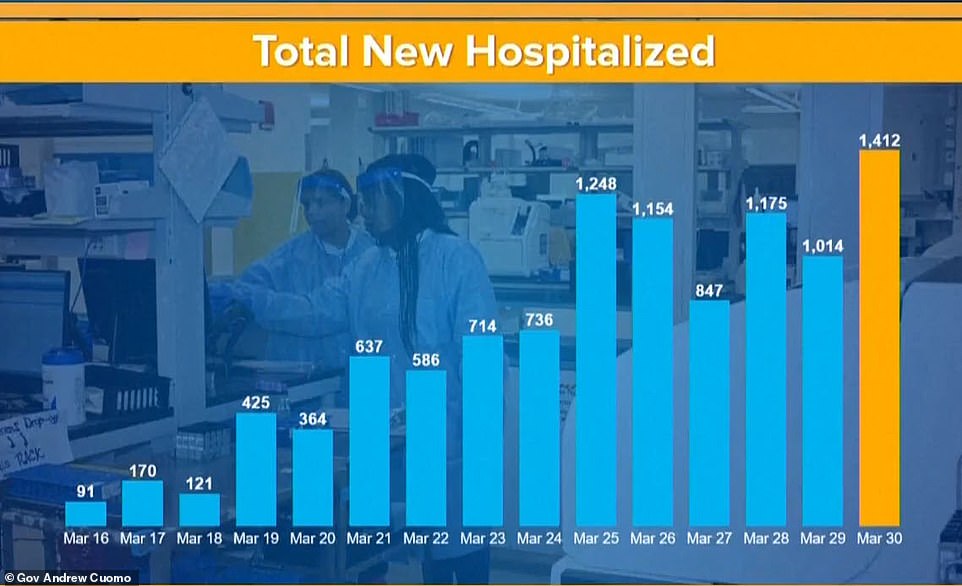 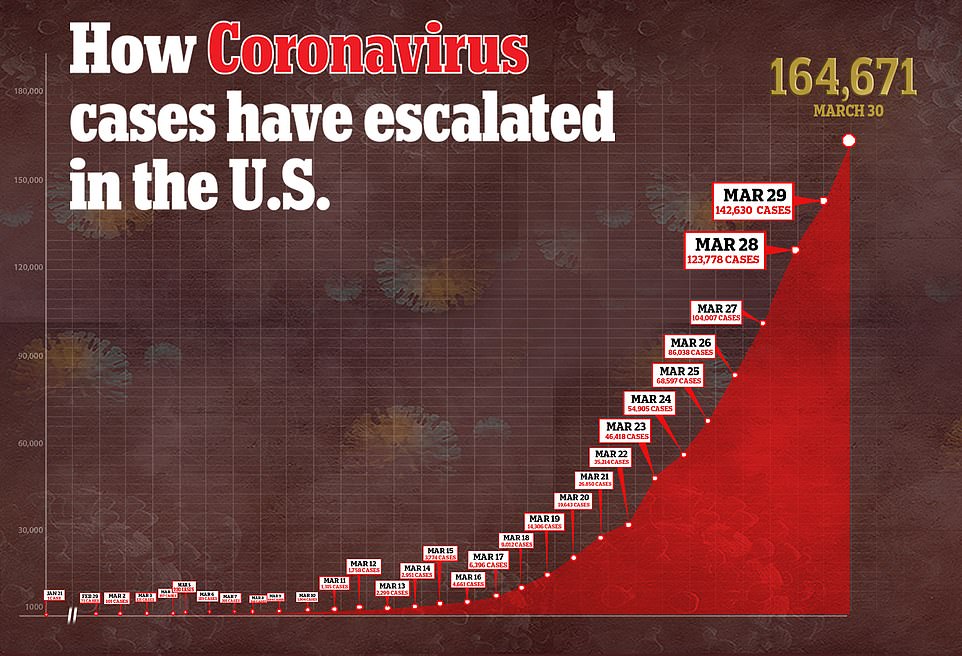 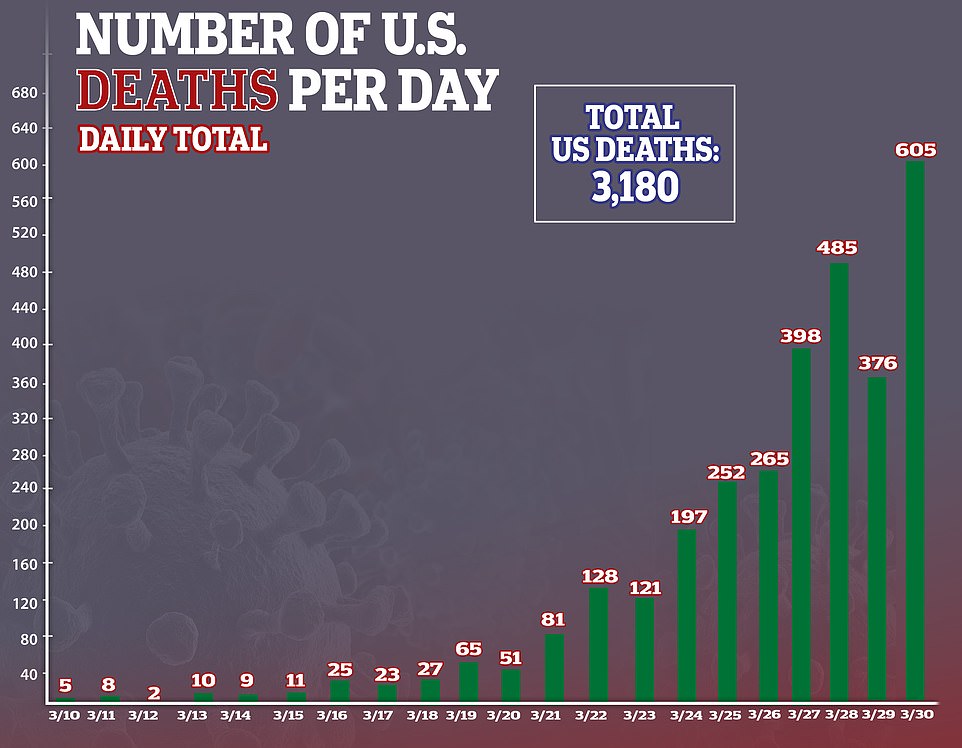 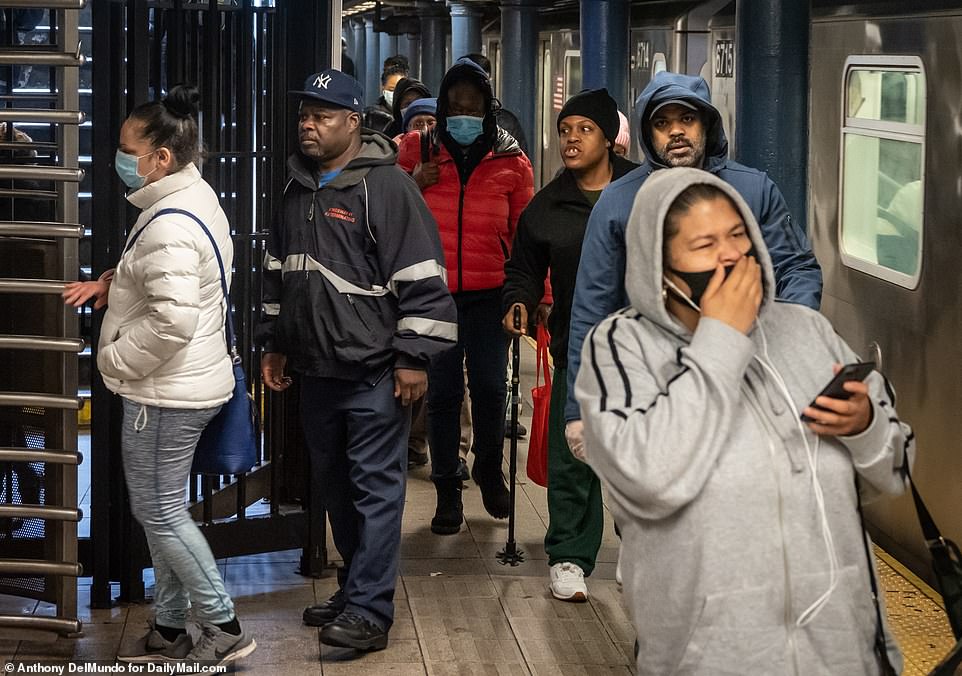 Despite being told to stay at home, there have been crowds of New Yorkers still using the city’s subway systems and not maintaining 6ft distances from each other 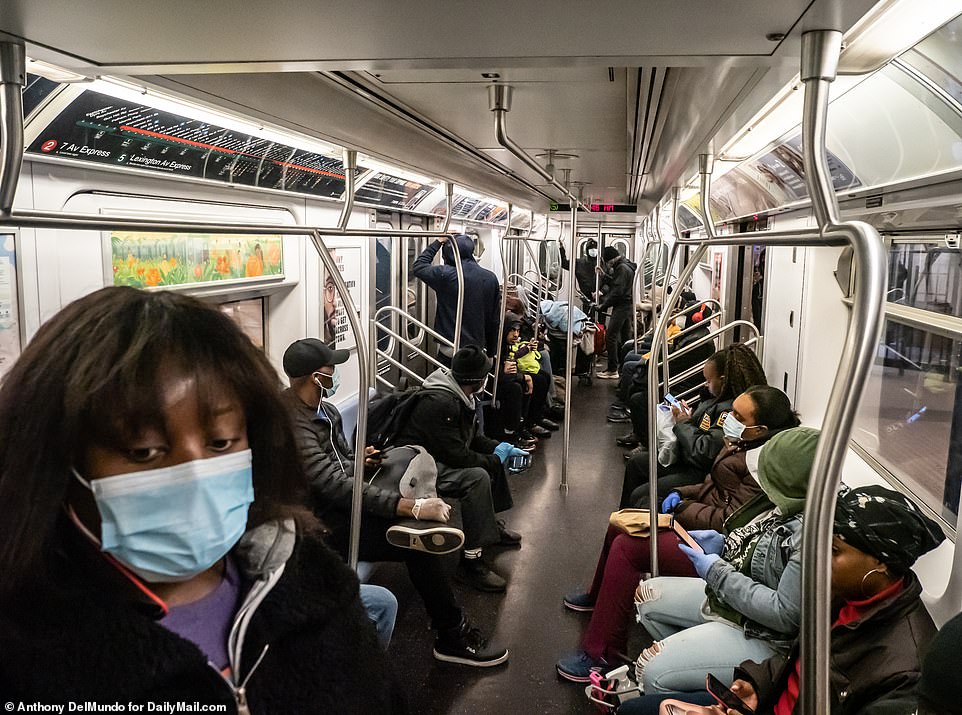 A crowded subway ca in Harlem on Tuesday despite the order to stay at home. Many non-essential workers have to still get to work 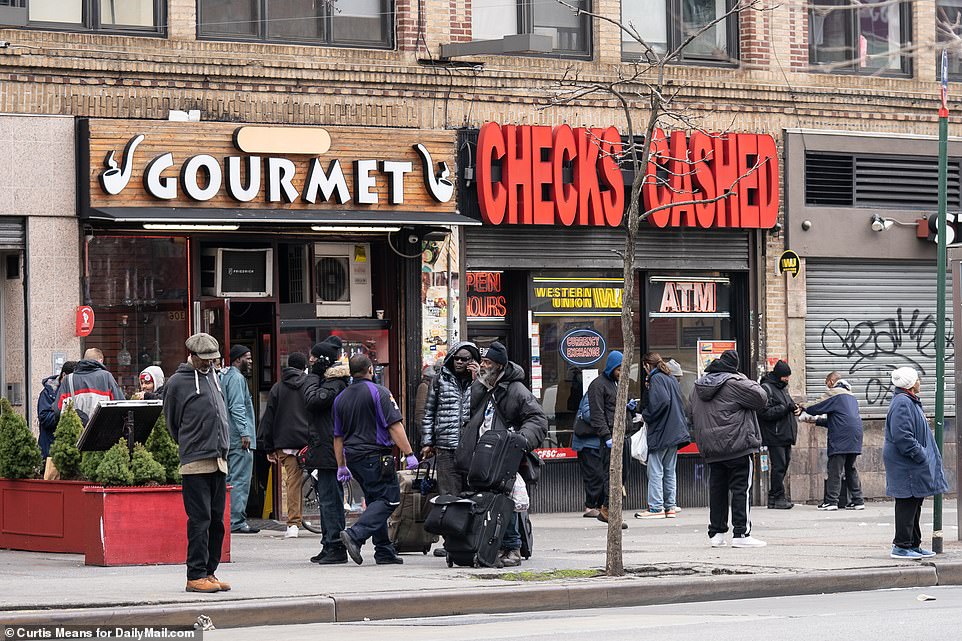 Cuomo also fumed over the ‘bidding war’ that has been created by the federal government for ventilators. He said that he had bought 17,000 ventilators from China for $25,000 each, a total of $425million, but that he was having to compete against every other state for them and the government.

‘Look at the bizarre situation we wound up in; every state does its own purchasing, trying to buy the same commodity.

‘The same exact item. So you have 50 states competing to buy the same item, bidding up each other, and competing against each other – it’s like being on eBay with 50 other states, bidding on a ventilator,’ he said.

He also suggested FEMA did not know how to cope with the virus and urged its operators to prepare now for it being a long battle.

‘Time is not our friend. It’s about a social stamina. This is not one, two, three, four, five, or six weeks.

‘This is not going to be an Easter surprise. Understand that and have the stamina to deal with it,’ he said.

President Trump last weekend told the country that the pandemic would be over by Easter. He has since walked that back.

He also fumed over the number of people, particularly in New York City, who continue to go out despite being told to stay at home.

‘Individual responsibility is  discipline, selflessness and being informed. Stay at home.

‘I know it’s hard to stay at home and I know everyone thinks, “I can go out and be smart and I won’t get infected because it’s me, I’m a superhero, its not going to be me.”

‘I’ve been trying to communicate this many different ways; we see people coming out who don’t need to be out,’ he said.

On Monday, crowds gathered to welcome the USNS Comfort as it docked in New York Harbor. There were also crowds of people in Harlem on Tuesday.