Home » World News » New York is opening, but there’s still entertainment for those staying in

New York is opening, but there’s still entertainment for those staying in 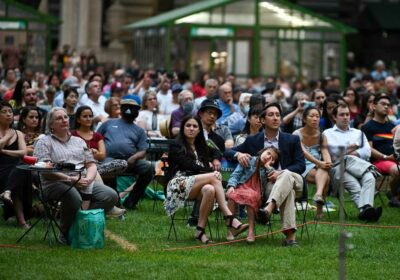 'Thelma and Louise' celebrates 30 years with a drive-in

Scene for the outs & the ins

If New York isn’t wide open yet, it’s at least blinking its eyes. Last night was reserved seating in the park. For opera. Followed by a Fifth Avenue dinner for the first female president of the Italian senate. Definitely beats dining on reheated leftover pizza while watching TV in your PJs.

Burton: “I’ve had storytelling mentors in my life — my mother, Alex Haley, ‘Star Trek’s’ Gene Roddenberry and Fred Rogers. Important for ourselves is to discover ourselves, discover who we are. And the courage to share that truth. Storytelling is a sacred pursuit.”

Also $15 a month if you sign up for their MasterClass.

Allen Howard Weisselberg, the Trump Organization’s chief financial officer. Under the microscope for “fringe benefits,” investigation designed to make him flip on the Trumps. If not, by Labor Day he gets himself nailed for tax evasion.

Should no link exist between any Trumps and any corporate shenanigans, and should Weisselberg take the fall — no jail time for nobody. If Trump haters find a way to blow taps on their trumpet, creditors could call in near a billion in debt.

Rudy Giuliani’s law license got pulled June 24. Suspended, could be disbarred. Roy Cohn got disbarred almost 35 years to the day — June 23, 1986. New York lawyers repping Donald appear to be in a Monopoly game — minus the Get Out of Jail Free card.

Story I came across about Anthony Hopkins who this year won an Oscar:

To find his voice for fictional serial killer Hannibal Lecter in 1991’s “The Silence of the Lambs,” the Welshman combined the sounds of Katharine Hepburn and Truman Capote with the sound of artificial intelligence character Hal in “2001: A Space Odyssey.”

This created an eerie monotone sound. He says, “I heard in my head three voices — Hepburn’s, Capote’s and Hal’s. First, I wanted to test some unidentifiable cockamamie American accent — but when I first tried this one at rehearsal those around let out a ‘My God!,’ so I knew I had it.”

Keiko: “Pay a fixed price per person. It’s as simple as ordering a taxi.” (Me, I don’t see a meter sticking out of a rump roast, but the idea’s great.)

Bill de Blasio has told friends he will not run again for president next time around. Comedy writers all over the country are demanding a recount.