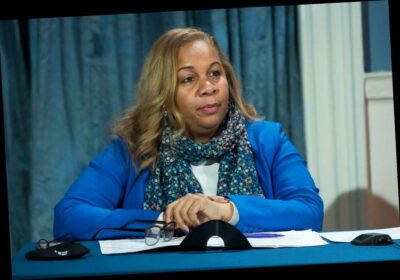 Good riddance to the worst schools chancellor in NYC history

‘Kids in cages’ being taught in class, WH says, as schools remain closed

Incoming schools Chancellor Meisha Ross Porter has made it her mission to racially revamp the employment rolls as she moved up the ranks of the Department of Education — often at the expense of white and Jewish educators, critics charge.

Porter once boasted about her quotas.

“When I am selecting principals, teachers or leaders — after we make the list, we look at it and we count: how many women, how many people of color, and why. Who we chose, and why,” Porter said.

“I look at the makeup, and I literally count — and it’s OK for us to do that,” Porter told a 2018 panel at Fordham University.

The educator, tapped by Mayor de Blasio to replace Richard Carranza after the chancellor abruptly announced his resignation Friday, is accused in at least two recent lawsuits of discriminating against older, white and Jewish educators.

She is not named as a plaintiff in either action, but is accused of creating a hostile environment.

Porter, the first Black woman to helm the nation’s largest school system, rose from teacher to superintendent in the Bronx’s District 11. Carranza then promoted Porter as one of nine new “executive superintendents” in August 2018, months after he arrived in New York. She made $209,479 last year.

“I say almost every day that one of my jobs is to disrupt and dismantle systemic racism,” she told the Fordham forum. “And every time I say it, I’m afraid. I am afraid that’s going to be taken the wrong way, that folks are gonna misquote, mistweet, misdirect what that means. But I keep saying it.”

But some called it an excuse to force out or “marginalize” certain employees — “especially older Caucasian women in leadership positions,” charges Karen Ames, a veteran Bronx superintendent who was demoted and pressured to leave, in a lawsuit filed this month.

Ames claims in the suit that her 30-year career, which included successes such as raising math scores in struggling schools, was derailed by Carranza’s “equity” agenda.

Porter once “humiliated” Ames during a discussion about rezoning schools in the Throgs Neck area to achieve racial equity. Porter told Ames she could not participate because she is white, the suit says.

The suit also says Porter, along with a new superintendent, Erika Tobia, “took negative employment action against Jewish members of the District 8 team,” including Nicky Rosen, who now works as Director of Continuous Improvement in District 7.

“Nicky Rosen transferred against her will to District 7,” the suit alleges.

A demoted Jewish administrator said his treatment by Porter was “unprofessional and uncalled for.” He said she did not communicate with him, and that his complaint to the DOE’s Office of Equal Opportunity was ignored.

Porter was known to ask superintendents at the end of meetings to cross their arms in a “Wakanda Forever” salute from the movie “Black Panther.”

Rafaela Espinal, who headed Community School District 12 in the Bronx, said she was fired without explanation after repeatedly refusing to do the “Wakanda Forever” salute, according to a lawsuit. While Espinal and many others considered it a “black power” gesture, DOE officials insist the salute signifies “Bronx Strong.”

Espinal, a Dominican-American who identifies as Afro-Latina, said Porter chastised her for not being “black enough.”

The two latest suits follow two other lawsuits in which four female executives accused the Carranza administration of demoting them or pushing them out in large part because they were white.

Like Carranza, Porter’s focus on race has been criticized as divisive and tangential to the central mission of improving the education offered by NYC schools.

“I challenge you to think about what [diversity] means when you leave work,” she told the Fordham forum. “Who your children engage with. Who comes to dinner at your house. Who you eat dinner with. Who you talk to. Because that changes the narrative and experience. When we change what happens in the dynamics of our own family and our own homes, then we’re changing the world.”

“Is she really for all the students, or will she paint by color?” Chin asked. “We are hoping that the toxic anti-Asian racism that Carranza brought is gone, and that his replacement is better.”

Chin added, “Her primary job is to educate all the children. Everything else is secondary.”

While Porter was a member the de Blasio’s School Diversity Advisory Group which opposed gifted and talented programs and schools that “screen” for the best students, she pulled strings in 2017 to get a child she took in from a friend into a better school.

“She was ushered in by higher-ups,” a DOE insider said. “They knew who she was.”

A $45,000 gala thrown to celebrate Porter’s birthday and promotion to executive superintendent remains the subject of an open probe by the Special Commissioner of Investigation for city schools.

Employees forked over $111 per person to attend the lavish affair at Villa Barone Manor, a Bronx catering hall, featuring a buffet, DJ and open bar. Wearing a tiara and glittery white dress, Porter made a grand entrance in a glass elevator that rose onto the ballroom — a flourish that cost $500 extra.

Under DOE rules, celebrations of a fellow employee’s promotion “should be held in school” and “must have a modest financial cost.”

SCI was accused of sitting on the case to shield de Blasio and Carranza.

“It is no surprise that the NY Post is scrambling to find any reason to tear down the first black woman to be named Chancellor,” said DOE spokeswoman Danielle Filson. “Ms. Porter is respected by colleagues across the city and qualified for the job – this is ridiculous race-baiting and she is not a defendant in the lawsuits.”