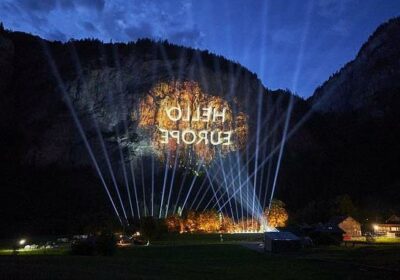 The Book of Genesis: An epic performance worthy of the rock band! But where’s Phil Collins? New Korean luxury car maker carves its consumer pledge (virtually) on a mountainside as it launches in UK and Europe

From the epic scale of the event amid the magnificence of the Swiss Alps, you’d be forgiven for thinking that international rock band Genesis had just arrived on tour.

But in fact the Genesis making all the noise is new Korean luxury car brand Genesis – which aims to shake up the car industry in Britain and Europe with a revolutionary new haggle- and hassle-free way of selling its upmarket cars and dealing with customers.

To celebrate the opening of its business in the UK, Germany and Switzerland, the car firm used the latest 3D projection technology to project its consumer pledge – and its cars in giant form – across the mountains on a display the size of almost three football pitches. 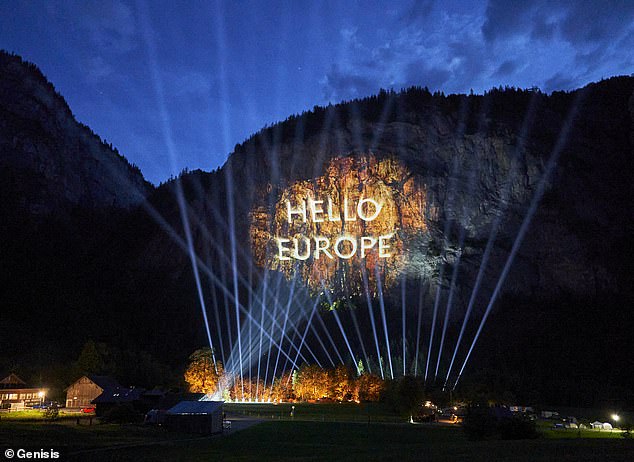 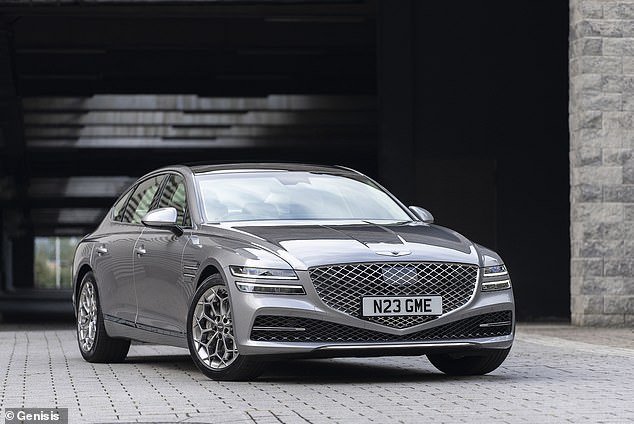 Claimed to be ‘the biggest-ever projection of its kind ‘ Genesis said it wanted to ‘set in stone a commitment to rewriting the rules of car ownership.’

But behind the extraordinary stunt there is a serious message – that new kid on the block Genesis aims to shame its rivals by providing unprecedented levels of customer service.

That includes no hassle sales, smart boutique-style ‘Studios’ instead of traditional car showrooms, a high proportion of female personal assistants, zero commission to eliminate high pressure incentives, and cars delivered directly to your home, and picked up again for servicing.

Genesis said: ‘Car buyers can expect a very different experience – including staff who are focused on delivering high quality service instead of sales.

‘Pricing is fixed, no matter if you buy in the Studio, or online. There’s no more haggling. If the customer wants a test drive, Genesis will come to them, delivering a car to their home or work, respecting their time. ‘

In an echo of the Ten Commandments brought down from the mountains by Moses, Genesis said its own promises were also ‘set in stone’ through the magic of the cutting-edge projection technology. It projected its message onto the rockface images of the new Genesis vehicles , appearing on the mountain at around 30 times the size of an average two story house. Lighting up the cliff-face of a mountain near Lauterbrunnen, the spectacular display measured 275m wide and 180m high.

The company said: ‘We have created the largest-ever 3D projection of its kind on a mountain in the Swiss Alps, to mark the brand’s arrival in Europe’.

‘It confirms our commitment to changing the way people buy and own cars in Europe.’

‘Genesis promises new approach to car buying and ownership with exceptional customer service and respect for everyone.’ 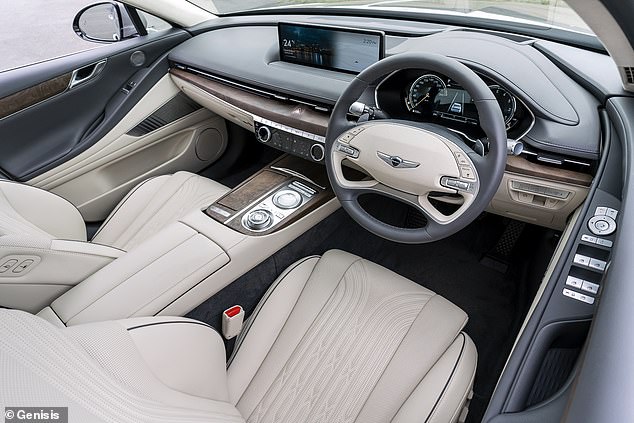 The interior of one of the Genisis models, which is the luxury arm of Hyundai Motor Group

Set up five years ago, Genesis is the luxury vehicle division of the South Korea’s Hyundai Motor Group which includes both the Hyundai and Kia brands.

The GV80 is also the car in which golfer Tiger Woods had a recent spectacular and well-publicised prang in the US – so good job it has a top five-star safety rating.

Genesis promises a ‘no pressure, no stress’ sales approach, a largely female staff of ‘personal assistants’ with travel industry service and luxury goods experience, a ‘we come to you’ sales policy and 5-year care plan with home or office delivery and collection, transparent pricing, no haggling or discounting that ‘removes the need to visit a dealer ever again’.

Genesis’s biggest seller is likely to be the GV80 SUV – which bears an uncanny resemblance to a Bentley Bentayga – and which hit the headlines as the car in which golfer Tiger Woods had a recent spectacular and well-publicised prang in the US. So good job it has a top five-star safety rating. Available as a five- and seven- seater configuration, the GV80 line up starts at £56,715 for the Premium Line. I recently drove a fully-loaded versatile seven-seater version of the Luxury Line priced from £62,315 but loaded with £15,000 of added extra kit, including innovation and comfort packs, and Nappa leather seats, that raised it to a cool £77,485. Still around half the price of a Bentley Bentayga which starts from about £150,000.

It may not have the Bentayga’s 4.0 litre engine, but riding on 22 inch wheels (20inch as standard) the willing turbocharged 3.0 litre 278 horse-power straight six-cylinder diesel engine linked to an 8-speed automatic gear-box does provide spirited acceleration and an engaging drive, particularly in Sport mode, with 0-62mph in 7.5 seconds up to a top speed of 143mph. Also on offer is a turbocharged 304 horse-power 2.5 litre 4-cylinder petrol engine. 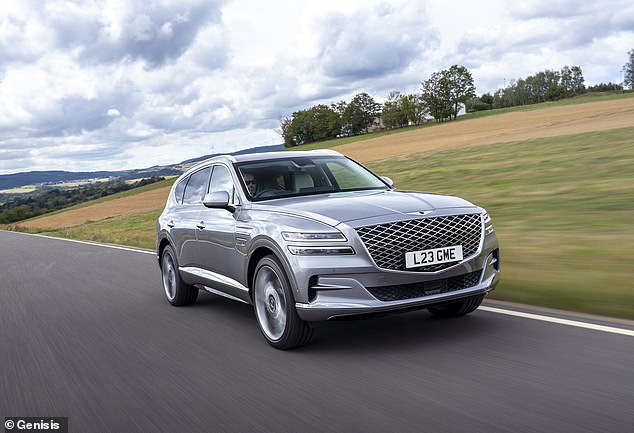 The G80 saloon (on the road from £37,460) and GV80 SUV share many of the same attributes apart from the specialist SUV elements – have been specially tuned for UK and continental roads with tens of thousands of miles covered across 15 countries on some of the toughest and most challenging roads, as well as on the Nürburgring circuit. Engines for the G80 saloon in the UK are the 2.5 litre 4-cylinder 304 horse-power single turbo petrol and a frugal 2.2 litre 4-cylinder diesel. A 3.5 litre 375hp V6 petrol engine – offered in some markets – is not planned for the UK market for either model.

At next week’s Goodwood Festival of Speed, Genesis will be launching its sleek new new G70 Shooting Brake – its fifth model and a car designed with the UK market in mind – as well as marking the European debut of its Genesis X concept car.

With impeccable timing, rock-band Genesis – whose greatest hits include ‘I know what I like,’ Follow Me, Follow You’ and ‘I can’t dance’ – really are about to embark on a reunion tour, including their first to the USA in 14 years. Given that sibling brand Kia snapped up Robert DeNiro to help promote their e-Niro and Niro range, I wonder how long before Genesis Motors also makes the link and gets them on board?

He explained: ‘At Genesis, our Korean heritage underpins everything we do, from design and innovation to our service, rooted in the Korean principles of hospitality and respect. By taking care of the details so our customers don’t have to, we give them the most precious luxury – their time.

‘We are making a promise to our customers that we will do things differently.’