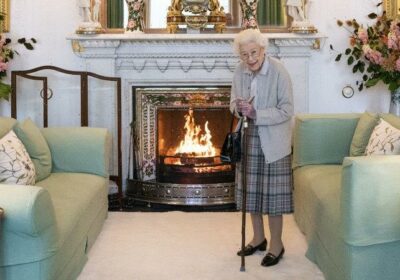 London: The death of the Queen’s beloved dog, Candy, a companion for nearly 20 years, was a “huge blow” to her fragile state during the final months of her life at Balmoral, it has been revealed.

The loss of the 18-year-old dachshund-corgi cross, known as a dorgi, occurred shortly after she left Windsor on July 22 for her annual summer holiday at her Scottish Highlands estate. 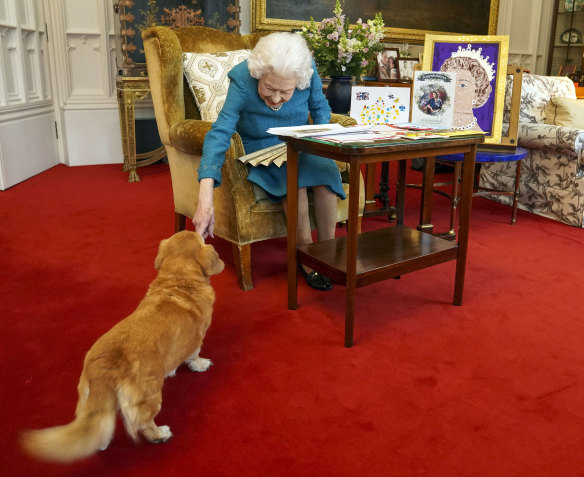 The Queen is joined by Candy while filming a television segment in February 2022 for her upcoming Platinum Jubilee.Credit:Getty

Candy, her oldest and longest-surviving dog, had been at her side since 2004, and her death was said to have “hit the Queen hard”.

Candy captured the heart of the nation earlier this year when she was captured on camera cheekily interrupting the Queen’s Platinum Jubilee photoshoot in Windsor Castle’s Oak Room.

A startled sovereign replied: “And where did you come from? I know what you want,” likely to be a reference to a treat.

Several new details about the 96-year-old monarch’s final weeks have come to light ahead of her state funeral at Westminster Abbey on Monday, in an event which will be attended by more than 500 world leaders and bring more than 1 million people to the streets of central London. 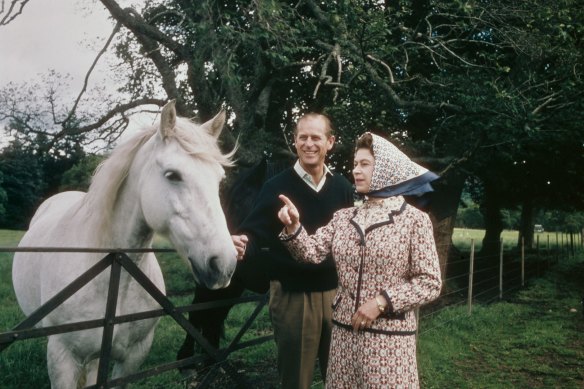 Queen Elizabeth II and Prince Philip at a farm on the Balmoral estate in 1972.Credit:Getty

While the Queen’s health had severely deteriorated in the past 12 months, several friends who had spent time with her in her final weeks have said she was “sparkling” and “buoyant” in her last days and weeks, despite her frailty.

But only 48 hours before the “kissing of hands” ceremony took place at Balmoral to appoint Liz Truss as Britain’s newest prime minister, the Queen was advised by concerned courtiers that she might consider letting the then Prince Charles perform the duty instead.

Charles had already replaced his beloved mother by reading the Queen’s Speech in parliament earlier this year. 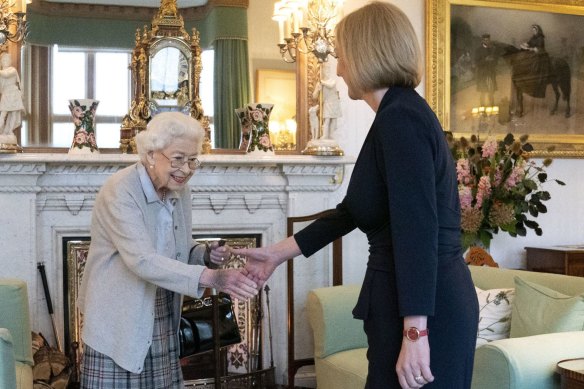 However, The Sun quoted “informed sources” saying the monarch would not consider a switch.

She told them all: “Of course I have to, it’s my job”, the newspaper reported.

She proceeded with the tradition, spending 40 minutes with the outgoing prime minister Boris Johnson, who said the Queen was “bright and focused” throughout. He said this was “amazing”, given how ill she obviously was.

A meeting with Truss followed where the final images of the world’s most photographed woman showed her wearing a grey cardigan and a pleated Balmoral tartan skirt. She appeared cheerful as she welcomed Truss, holding a walking stick as she leaned forward to shake hands.

But royal sources told The Daily Mail that even on Tuesday there was no immediate alarm about the Queen’s condition, although she was “clearly tired” after the exertions of receiving two prime ministers. A doctor and nursing staff were kept close by throughout her stay at Balmoral, and she was receiving regular medical attention, the paper reported.

The next day, Princess Anne, Princess Royal, arrived back at Balmoral to be by her mother’s side after she had been sailing off the coast of northern Scotland. The Queen was placed under medical supervision and forced to pull out of a video call with her Privy Council later that day.

A source who knew the Queen told The Times that, after this work had been completed, the Queen was ready to “let go”.

They said: “I think she felt that with the change of prime minister she had finished tidying everything up, as she had been doing, and then simply let go.” 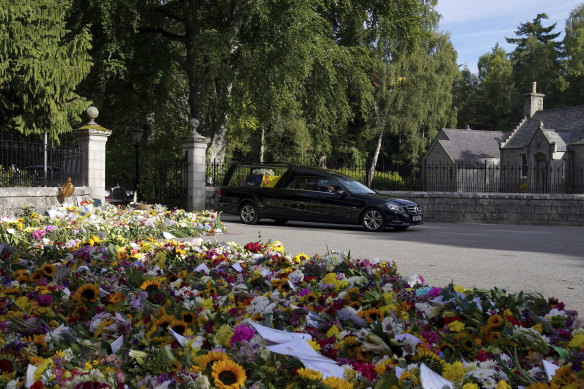 The Queen leaves Balmoral for the final time.Credit:PA

On the day of the Queen’s death, about 250 kilometres away at Dumfries House Jenna Bush Hager, the daughter of former US president George W. Bush, was preparing to speak with Charles’ wife Camilla, the now Queen Consort, for a podcast about her bookclub before a commotion outside.

“We were setting up the interview… At 12.30pm we heard running up and down the halls, and it was her team and his team,” she told the US Today program.

“They came in and said, ‘Can you please be quiet, there’s a call. [Charles] is on a call.’

“All of a sudden, we heard a helicopter, which they don’t take lightly, go off and they came in and said, ‘Your interview – which up until then we knew they were excited about – has been postponed’.”

Richard Kay, the editor-at-large for the Daily Mail, said the Queen’s physical decline had not made her last weeks easy as she struggled to stand and walk – especially up and down stairs – and she was eating sparingly.

She had asked that many of the traditions of a Balmoral summer should continue, even though she could not join in as she once did, particularly the walks and the picnics. She reportedly found it harder to do her regular newspaper crossword puzzle.

Kay wrote that she found her final days in her beloved Highlands “so consoling” after the sadness of losing Candy, one of four dorgis over her lifetime. But she surprised her close aides by the fact she wanted her most loyal of companions to be buried at Windsor Castle – against her tradition of burying her pets where they die.

“Normally the Queen herself oversees the burials, accompanied by her head gardener. Later, a headstone engraved with the dog’s name, date of birth and death and a suitable epitaph is put up. But on the death of Candy she arranged for the dog’s remains to be flown to London and transferred to Windsor,” he wrote.

“So unexpected was her decision that her close domestic staff saw it as a sign that the Queen had every intention of being back in Windsor at the end of the holiday to supervise the placing of the headstone herself.” 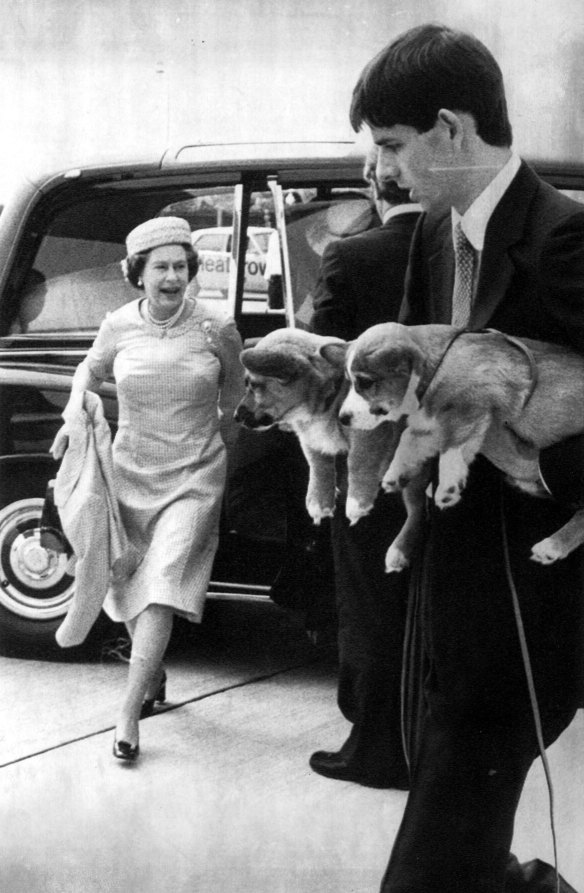 The Queen pictured with Corgi pups on the tarmac at Heathrow Airport in 1981.Credit:AP

However, the Queen became frailer during late August and doctors carried out regular checks-ups. Charles reportedly made daily visits.

Reverend Iain Greenshields from the Church of Scotland dined with her on Saturday and again on Sunday lunchtime. He said she was in “good spirits” and “engaging” company and was “absolutely on the ball”.

The late Queen was joined by a handful of committed staff, including Page of the Backstairs Paul Whybrew and her Serjeant-at-Arms Barry Mitford, who were with her until the end.

The two men were said to have delivered the Racing Post each morning and accompanied her in watching television. Her right-hand woman Angela Kelly, who worked as the Queen’s personal assistant and dresser, was also there to ensure the Queen was comfortable and did not overexert herself.

With only Charles and Anne by her bedside in her final hours, it is not clear whether the Queen, like her mother, received the last rites.

John Warren, her trusted bloodstock and racing adviser, spent the final weekend at the estate discussing her horses. He said they sat for “hours” strategising and making plans for the stable. 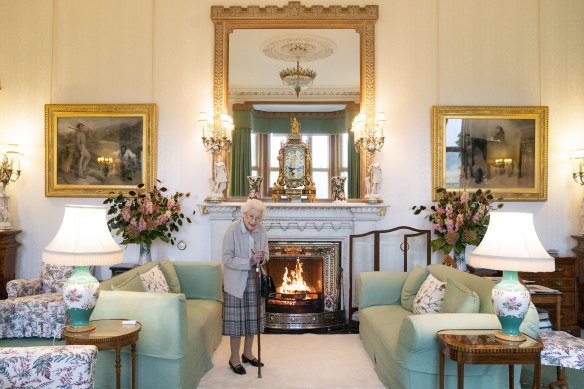 The Queen in the drawing room of Balmoral Castle just two days before her death.Credit:PA

“She was in such a healthy state of mind and in tremendous form… It’s very important to know that she was absolutely, wonderfully switched on.”