A neighbour has demanded a company director next door to cut down his 40ft leylandii hedge that he says has forced him to move his satellite TV dish twice.

Richard Abraham, who claims the trees tower over his property and keep his garden in darkness, has taken his dispute to the Scottish Government.

He has teamed up with fellow neighbours Jennifer Ayres, Dr Lucy Macnay and Aqeel Ajazi who all insist leylandii belonging to company director Robert Shand, 77, makes their lives a misery.

They attempted to use high hedge legislation to have them lopped but were left dismayed when Aberdeen City Council rejected the move earlier this year. 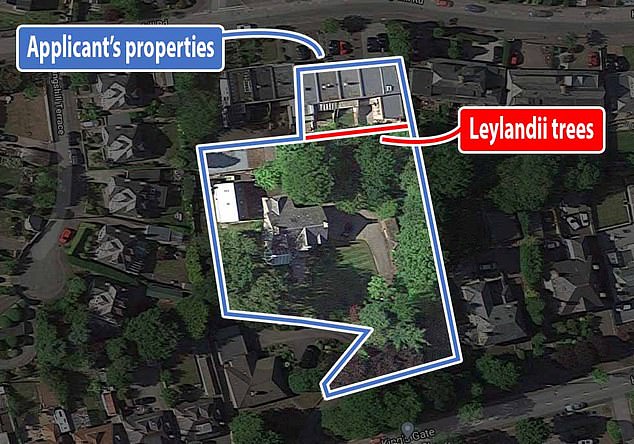 An aerial view showing the property trees and the leylandii trees. Richard Abraham, who claims the trees tower over his home, has taken his dispute to the Scottish Government 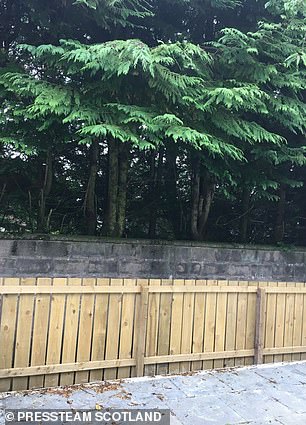 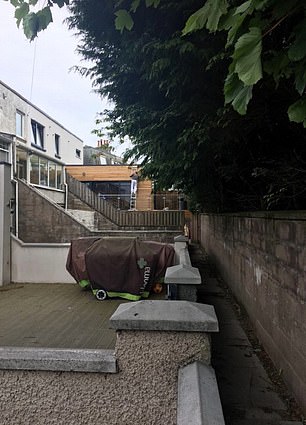 Mr Shand’s £560,000 detached property in Aberdeen is surrounded by trees but fed-up neighbours insist they form a ‘solid wall’ which denies their homes light and make it impossible to grow plants and grass in their gardens.

A bid to have the feud brought to an end through mediation also failed when Mr Shand’s wife, Brenda, said that they did not wish to participate.

In his letter to the council to support the initial application, Mr Abraham said: ‘Some time ago, a line of continuous semi-evergreen trees were planted as a boundary.

‘These have been allowed to grow unchecked for a while now and now reach a height of over 10m, forming a continuous line of intergrown hedge that creates a complete barrier to sunlight.

‘While we respect the wishes of Mr and Mrs Shand to privacy, we believe that the current state of growth is unreasonable.

‘We are unable to grow plants on our patio and had to replace our lawn with paving as the grass kept dying due to lack of sun.

‘It unduly encloses our view and creates an oppressive environment through being disproportionate in height compared to our garden space.

‘It blocks our satellite signal to the extent we have had to move the dish twice as the trees continue to grow.’

The disgruntled neighbours have now appealed to the government in a bid to have the trees brought down.

A letter sent by Mrs Ayres said: ‘Light would be greatly improved upon in the summer months and light of any portion is very welcome during the short days of an Aberdeen winter. 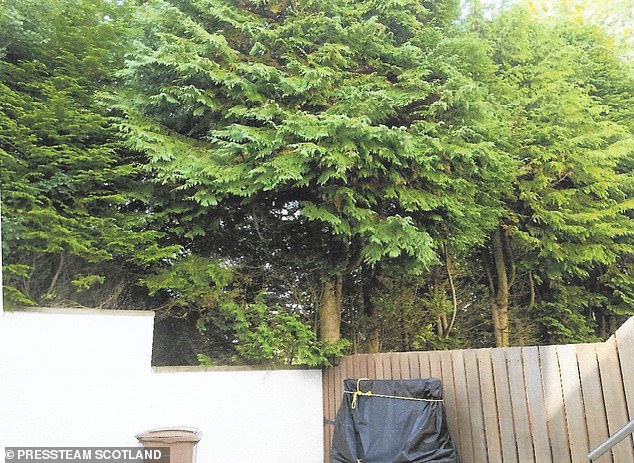 The trees belonging to Robert Shand taken from the garden of Robert Abraham. The group of neighbours in Aberdeen have appealed to have them chopped down

‘This is a clear case of putting the owners privacy claims above the suffering he is forcing on the applicants.

‘Should the owner feel his many large mature trees that dominate the area of garden offer insufficient privacy to some portion of his garden, he is of course free to plant more, hopefully less offensive, trees.

‘The applicants concern over the oppressive nature of the hedge is warranted. Again, the height of the high hedge clearly reduces light levels as it is a solid wall.’

Rejecting the neighbours’ earlier request, council planner Kevin Wright said: ‘It is considered that the issues raised by the applicants are unlikely to be resolved by the reduction in the height of the leylandii hedge due to the proximity and density of the crowns of the neighbouring large deciduous trees both during the summer months when the deciduous trees are in leaf and when out of leaf over the winter period.

‘On balance, I do not consider that a reduction in hedge height will have an impact over the summer months and that the marginal improvements during winter gained by the potential reduction in the height of the hedge outweighs the negative year-round impact on privacy to the hedge owner.’

A government reporter will issue a decision in due course.