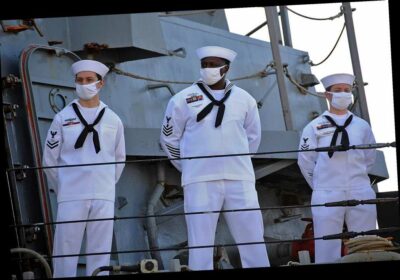 Navy sailors are allowed to advocate for Black Lives Matter at work because the military branch sees the organization as a “public policy issue” — and not “politically partisan,” according to a new report.

The guidance was doled out in the Navy’s “extremism” training slideshow, which asked whether BLM was considered “political stuff” that was off-limit discussion in the workplace, Fox News reported.

But the Navy said talk about BLM was fair game, according to the slides, which were obtained by Fox News from an official who took part in the Pentagon training.

“Advocating for or against a public policy issue (as here) is authorized as long as the behavior is otherwise lawful and the advocacy is not politically partisan in nature (e.g. it doesn’t specifically address a political party),” the slide says. “If the discussions make you uncomfortable, discuss the matter with your boss or another supervisor.”

BLM leadership has made their ideologies crystal clear in the past.

“We are trained Marxists,” said co-founder Patrisse Cullors in a 2015 video. “We are super-versed on, sort of, ideological theories. And I think that what we really tried to do is build a movement that could be utilized by many, many black folk.”

And last year, a BLM mob harassed guests leaving the Republican National Convention at the White House, calling them “racists” while also clashing with police at the scene.

Asked on at a press briefing Monday whether BLM chat at work was “considered partisan,” Pentagon press secretary John Kirby said he was “not able to answer that question.”

He said the discussion as to why could “go down a rabbit hole in a million different things.”

“And that’s what we’re trying to get after,” he said.

But the Pentagon was taking its fight against extremism “seriously,” Kirby said, adding that it was “a hard problem to get our arms around.”

“I’m not going to be able to come to the podium this week, next week or the week after with a plan and say, ‘This is it. This is how this is how it’s defined,’” Kirby said.

“And this is exactly how deep the problem is. This is going to be something and Secretary Austin has made very clear he’s going to work on every day that he’s the Secretary of Defense.

“It’s not something that you can take your foot off the pedal on.”