A MYSTERIOUS banner reading "I'm sorry Tom please forgive me" has appeared on a major roundabout.

The public apology, which is thought to have been put up on Friday, is leaving drivers wanting to know more. 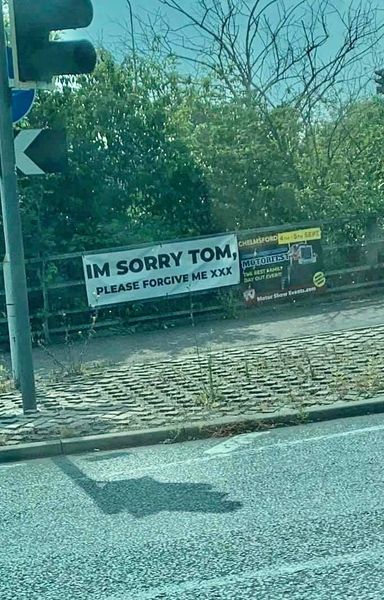 It sits on the Rayleigh Weir junction over the A12 in Essex and is impossible to miss.

Photos of the sign have been shared widely on Facebook, with hundreds of people guessing who Tom is and what the apology is for.

The original post on a local gossip page read: "Saw this on the Weir roundabout.

One person responded: "I'm invested. Who is Tom? What has this person done to him? Will we ever track Tom?"

Another wrote: "No idea what it is for but I'm soooooooo curious lol!"

And a man called Tom joked: "I'll find out when I get home I guess."

Another said it was "probably Jerry, he's always upsetting Tom".

While one social media user wrote they hoped Tom wasn't "big on punctuation" as the banner was grammatically incorrect.

Another compared it to the episode of Friends where Ross rings a radio station to apologise to Rachel when they were "on a break".