London: Opposition MPs from across Britain's divided House of Commons joined forces on Tuesday pledging to legislate against a "no-deal" Brexit instead of calling on a no-confidence vote in the newly-installed Boris Johnson when parliament resumes next week.

With 65 days until Brexit on October 31, the breakthrough marks the first time the six opposition parties have agreed to a combined strategy after failing to agree on an earlier suggestion that Jeremy Corbyn be installed as a caretaker prime minister. 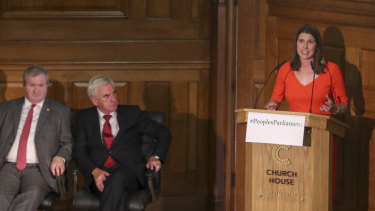 Jo Swinson, leader of the Liberal Democrats, right, speaks during the cross-party meeting.Credit:Bloomberg

"The attendees agreed on the urgency to act together to find practical ways to prevent no-deal, including the possibility of passing legislation and a vote of no confidence," the parties said in a joint statement after the talks held in Westminster.

The talks between Labour and the Remain-backing Liberal Democrats, Scottish National Party (SNP), The Independent Group for Change, and Green party, as well as the Welsh Plaid Cymru, came as nearly 200 MPs broke their summer holiday to return to Westminster to sign a pledge vowing "strong and widespread democratic resistance" to any government attempt to prevent Parliament from sitting to force through a no-deal Brexit.

The Labour MP and prominent campaigner for a second referendum, Stephen Doughty, said parliamentarians were prepared to stand up to the cowardly Johnson by signing the declaration, named after Church House, where they pledged to convene a People's Parliament if Johnson tried to shut down parliament before Brexit.

"After being launched just last night the Church House Declaration is nearing 200 signatories from MPs from across the parties and all parts of Britain," Doughty told The Sydney Morning Herald and The Age.

“Meeting today in this historic location with opposition leaders where Parliament and Churchill relocated during WWII sent a clear and unequivocal statement to undemocratic reckless Johnson that the People’s Parliament will not be gagged to help him deliver a no-deal Brexit and we will take whatever steps are necessary.

“If Johnson thinks there is support for his plan – he should have no fear of democratic scrutiny.

"Instead he and his shadowy advisers want to shut out the elected representatives of the people. There’s only one word for it – cowardice," he said. 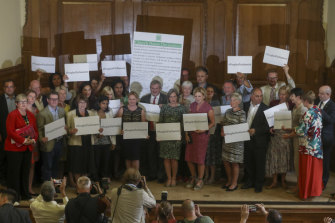 The cross-party members opposed any attempts to prevent Parliament from sitting with the aim of forcing through a No-Deal Brexit.Credit:Bloomberg

Johnson is trying to renegotiate the Withdrawal Agreement the EU struck with his predecessor Theresa May, that the Commons rejected three times. He wants the EU to drop the mechanism designed to avoid a hard border between Ireland the Northern Ireland.

There were more signs the Tory party were preparing for an early election with the Chancellor Sajid Javid cancelling a major speech planned for this week in favour of a major spending review in early September.