Nice save! Quick-witted mother plucks her one-year-old boy from the path of deadly giant centipede in Thailand

A quick-witted mother pulled off an epic save when she plucked her one-year-old son from the path of deadly giant centipede in Thailand.

The one-year-old boy named Nong was playing with his toy cat on the living room floor of their home on Dinso Road in Bangkok when the venomous creature crawled towards him.

CCTV footage shows the close escape which happened on Wednesday afternoon and was posted online. 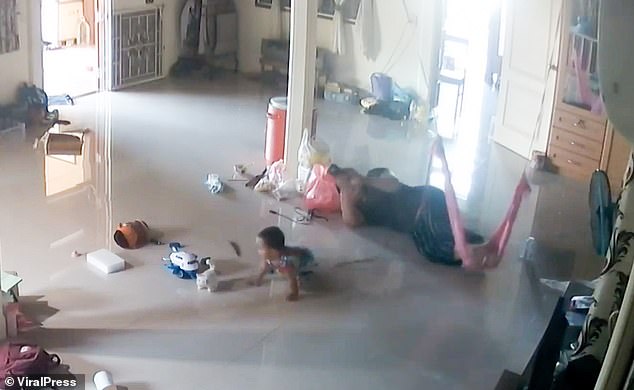 Video footage shows one-year-old boy Nong playing with his toy cat on the floor of their home on Dinso Road in Bangkok, Thailand as the venomous centipede crawled towards him

The video shows the one-foot-long centipede darting across the floor to the infant preparing to plunge its pincers into its flesh.

Centipede bites can be particularly dangerous to young children – as venom can speed up a victim’s heart rate and cause breathing difficulties.

However, Nong’s mother is oblivious to the deadly creepy crawly in her home as she lies on the floor near her son, playing on her phone. 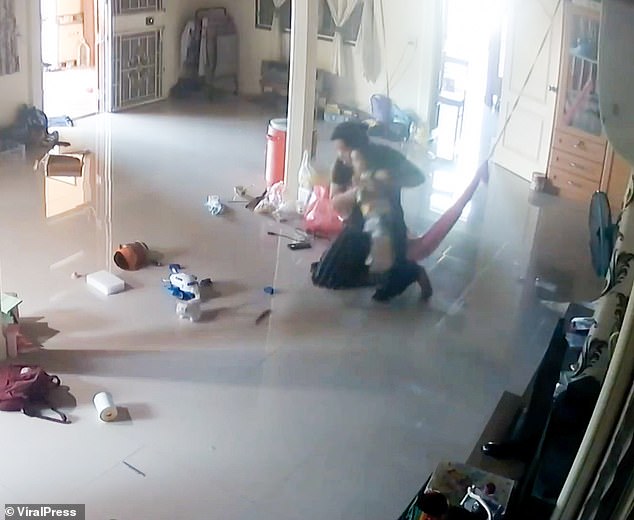 With seconds to spare, Nong’s mother senses the danger, drops her phone and scoops up her son out of harm’s way

Just as the centipede reaches the toddler, his mother senses the danger and scrambles across the tiles to scoop him up.

The grandmother then rushes over and traps the poisonous centipede under a cup before taking it outside.

Nong’s father, Santi, said the baby boy was unhurt after the brush with nature.

He said: ‘Mothers are heroes. They can sense when danger is near and save their children. 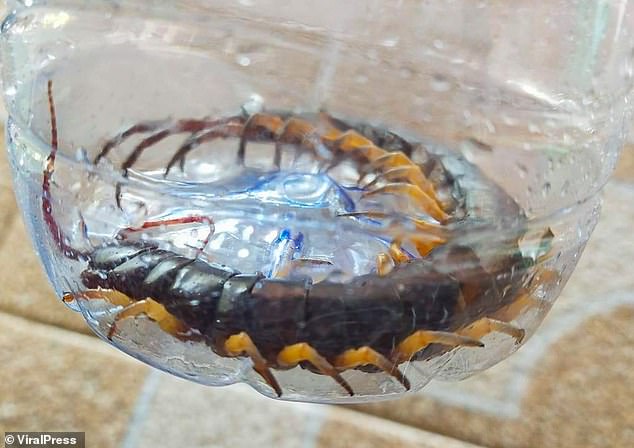 The giant creature was around 11.8 inches (30cm) long. Centipede bites can be particularly dangerous to young children – as venom can speed up a victim’s heart rate and cause breathing difficulties

‘That centipede was the largest we’ve ever seen in the house. It could have really hurt my son.’

The creature was around 11.8 inches (30cm) long. Most centipedes are venomous and can inflict painful bites when they injecting venom through their forcipules.

Bites from a giant centipede, known as a Vietnamese centipede or Chinese red-headed centipede, can cause swelling and severe pain for up to five days.

They are found across Thailand and Southeast Asia, where the reaction to bites can be fatal.