I fought for my son’s right to be a girl when he was alive… now I’m fighting for her right to be a parent after her death: Mother of transgender teen who died aged 16 of cardiac arrest embroiled in landmark legal battle over her frozen sperm

As soon as her three-year-old son could voice the words, he proudly insisted to his mother: ‘I’m a girl’.

Watching him happily playing for hours at home with his elder sisters’ toys and clothes, Louise Anderson says she knew it was no passing ‘phase’, despite some trying to tell her otherwise.

So much so that when ‘Lucas’ decided at the age of 12 to switch gender and become ‘Ellie’, it came as no surprise to family or friends who had witnessed a gradual – and resolute – childhood transformation from boy to girl.

Over the next four years, the teenager, from Stirling, would plan her life meticulously, opting to undergo a course of hormone blockers with a view to eventually receiving regular injections of the female hormone oestrogen once she turned 16.

But before all that she wanted to ensure one day she could still become the biological parent of her own child, and at the age of 14 opted to have her sperm frozen at a fertility clinic in Glasgow – becoming one of the UK’s youngest transgender children to do so. 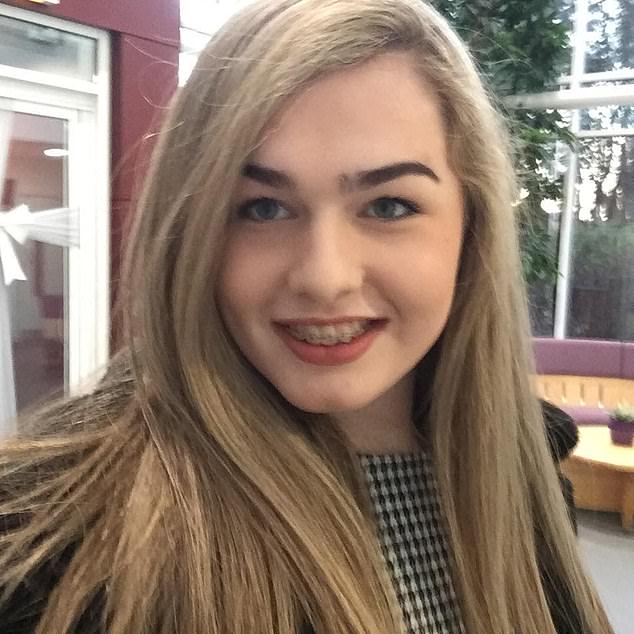 Pictured: Ellie Anderson, who passed away after suffering a cardiac arrest two months ago

Now it is that simple act of forward planning which has seen Ellie’s actions become the subject of an extraordinary ethical battle, as well as potentially a landmark legal case, that could have repercussions for the UK’s human fertilisation laws.

Two months ago, the teenager passed away, aged only 16, after suffering a cardiac arrest.

The cause of her death has yet to be determined after a post mortem failed to shed any light on the tragedy, but for her grieving mother the sorrow of losing Ellie has been worsened by the fertility clinic now informing her they will have to destroy her samples in line with present guidelines.

If Ellie had been in a relationship, her partner would have had the right to ask for her sperm to be retained. But that right cannot be transferred to her mother without a ruling from the highest civil court in Scotland. 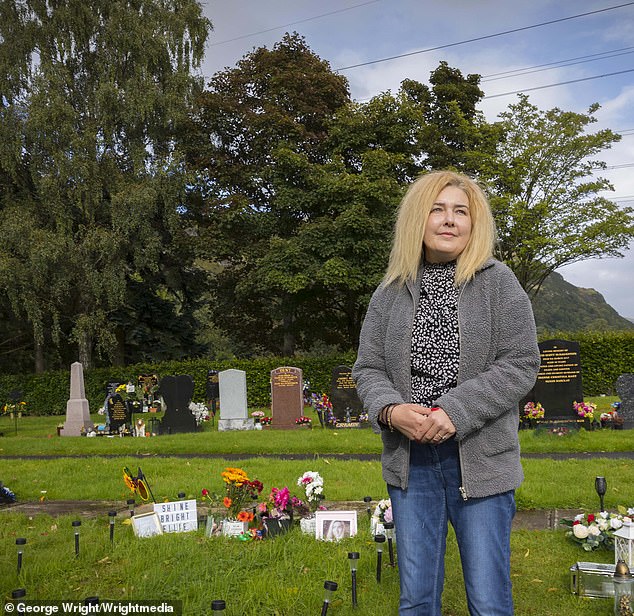 Louise Anderson’s daughter Ellie opted to have her sperm frozen at the age of 14 at a fertility clinic in Glasgow after she decided to switch gender at 12. Pictured: Ms Anderson 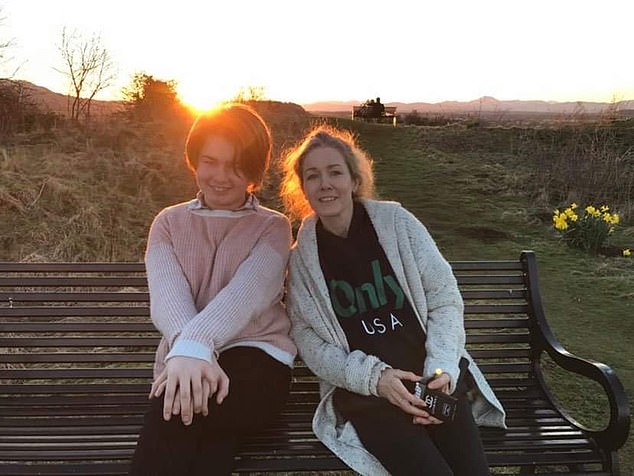 Pictured: Ms Anderson with her daughter Ellie in 2012, ahead of her death two months ago

Determined to see her daughter’s final wishes come true, Ms Anderson, 45, plans to launch a legal bid to save the samples in the hope she can one day find a donor egg and surrogate mother to have her grandchild.

‘One of her greatest wishes was to become a mother. I supported her all the way through her short life and, if it’s the last thing I do, now I want to support her in death.’

The fact Ellie had already saved £3,000 towards the approximately £20,000 cost of engaging a surrogate only underscores for her family the need to honour her wishes.

Ms Anderson added: ‘Ellie made me promise if anything happened to her I would make sure her children were born. She wanted a boy and a girl and we had even discussed their names. 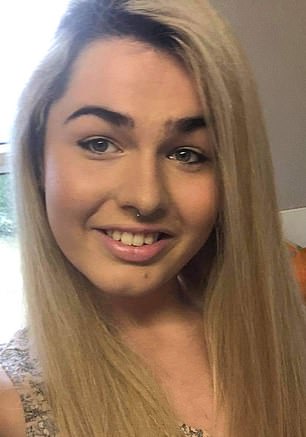 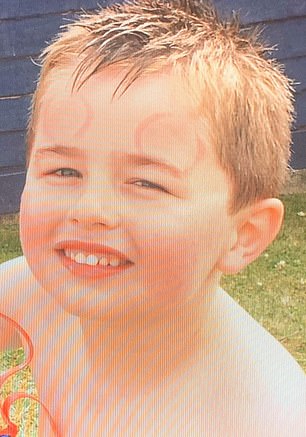 As soon as Louise Anderson’s three-year-old son ‘Lucas’ (right) could voice the words, he proudly insisted to his mother: ‘I’m a girl’. Pictured left: Ellie Anderson

‘It’s a secret I want to hold on to for now in the hope one day her wish will come true but if she has a daughter, she wanted her middle name to be Louise.

‘She told me, ‘You’ve been a great mum, I know you’d be a great gran and just on the off-chance it could turn out one of my children is trans, who better to raise them? You would support them all the way.’

Born in January 2004, the youngster was the sixth of Ms Anderson’s seven children and from a young age showed a keener interest in Barbie dolls and dress-up costumes, than in cars or Action Men.

By the time Lucas started school, much of his childish artwork in class often showed a boy with brown hair, like his own, standing beside a blonde-haired girl – an image of the female he longed to become.

Ms Anderson recalled: ‘It started from such a young age, I knew it wasn’t a phase.

‘At the age of three, Lucas told me repeatedly he was a girl. I didn’t care either way.

‘Within a few years, he no longer answered to the name Lucas at home, but wanted to be known as Kylie – after Kylie Jenner. I managed to talk him into Ellie.’

Throughout primary school, Ellie continued to wear boys’ uniform in class and answer to the name ‘Lucas’ but would change into her girls’ clothes as soon as she returned home.

It was only four months after beginning first year at St Modan’s High School, in Stirling, that she decided to officially switch gender.

Ms Anderson said: ‘I knew this was her mind and there was absolutely no confusion. We had a couple of meetings with the school as it was a first for them and they needed to know how best to support Ellie and the other pupils, so there was a level of acceptance and no bullying.

Despite the occasional comment, Ellie never experienced anything major. She was so strong about it and so brave.

From that moment it was ‘This is who I am’, ‘This is what I want to wear’ and ‘I want to be accepted’.

‘She was sick of living a double life, going to school dressed as a boy but not identifying as a boy.’

Shortly after her 13th birthday, she began gender identity counselling sessions with a psychologist at the Sandyford clinic in Glasgow, ahead of starting regular injections of hormone blockers.

Ms Anderson, who had separated from her husband, Darren, a couple of years earlier, said: ‘Ellie knew what she wanted and she had planned her future. 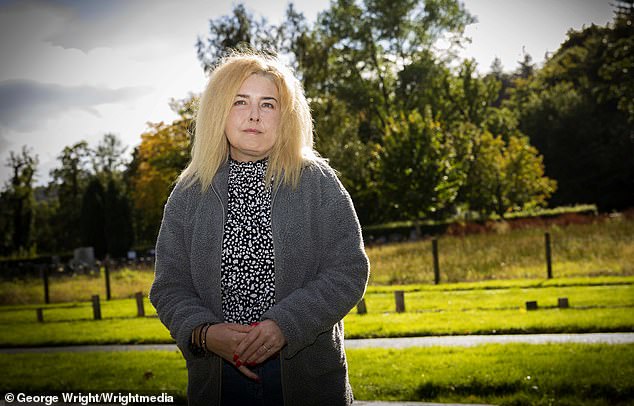 Ms Anderson, 45, plans to launch a legal bid to save her daughter’s sperm samples in the hope she can one day find a donor egg and surrogate mother to have her grandchild

‘She should have started hormone blockers sooner than she did but she requested a referral to the fertility clinic at Glasgow Royal Infirmary.

‘Her psychologist said it was the first time she’d had a trans child ask to freeze either their eggs or their sperm.

‘She was so excited when she was told she could do it. It was my birthday soon afterwards and she gave me a card which made me laugh – inside she’d written: ‘Happy Birthday from me and your unborn grandchildren frozen in the clinic’.’

Turning 16 in January this year, she was due to have assessments with two psychologists before beginning female hormone treatment when the Covid pandemic caused the UK-wide lockdown.

Her mother said: ‘She was champing at the bit to get started and was due to start treatment in late July but died a few days before, without it ever getting under way.’

But what is known is, happy and full of anticipation that she was soon to fulfil her wish, Ellie left the family home around 9.30pm on July 22, the lengthy summer days, meaning there was still time to notch up her daily 10,000-steps fitness regime.

Within 40 minutes, however, Ms Anderson found two police officers on her doorstep, propping up her daughter and saying a concerned member of the public had called them because she looked ‘disorientated’.

No ambulance was available because of an apparent backlog, so they brought her home.

A shocked Ms Anderson recalled: ‘I’m first aid trained, so I was trying to comfort Ellie, trying to reassure her everything would be fine, while the other police officer called repeatedly for an ambulance.

‘That’s when she started having small seizures. She looked scared but was lucid throughout because one of the officers called her Lucas at one point and she replied, ‘That’s not my name!’

When the ambulance arrived nearly two hours later, Covid restrictions meant she could not travel with her daughter to hospital. By the time she arrived separately, the teenager had suffered a cardiac arrest and died.

‘I was too late,’ said a heartbroken Ms Anderson. ‘The guilt of knowing she died without me there is almost unbearable and I’m still struggling to come to terms with it.

‘When I finally got to see her, it looked like she was sleeping. I just wanted to climb into the bed beside her, wrap my arms around her and tell her it was going to be alright.’

She added: ‘We’ve still no idea what happened and I still feel angry it took so long for an ambulance. I’ve tried to work out why she died.

‘I can’t believe it was anything caused by the hormone blockers as she had been on them for two years without problems.’

Unsurprisingly for someone who had mapped out their life plans so carefully, Ellie had also made her funeral wishes known to her mother.

Ms Anderson said: ‘Ellie loved talking to me about family history and wanted to be buried in her wedding dress.

‘We never got to see that day, so I had to force myself to go shopping online for one to dress her in for the funeral.

‘She loved having long, blonde hair and her make-up skills were exceptional. She wanted to be a hairdresser and was due to go to college after being given an unconditional offer.

‘So I felt I had to make sure she looked perfect to have the send-off she would have wanted. She looked beautiful, lying there so peacefully in her white dress. I even managed to get a carriage, drawn by a horse with plumes of rainbow colours, to carry her coffin to the cemetery.’

Thanks to the looming battle with the fertility clinic, who in a new development last week agreed to extend a temporary ‘stay of execution’ until November 30, it means, she says, there has been barely time to grieve.

Her solicitor Virgil Crawford is now consulting with a QC with a view to seeking an ‘action for declarator’ at the Court of Session which would allow Ms Anderson to gain ownership of her child’s sample. If unsuccessful, they intend to appeal to the Supreme Court.

Yesterday, a spokesman for NHS Greater Glasgow and Clyde, which runs the clinic, expressed sympathy with the family but insisted: ‘The storage of gametes (sperm) is managed in line with the Human Fertilisation and Embryology Act and complies with the consents provided by the donors.’

Gazing at photographs of her smiling daughter, Ms Anderson, who has also started an online petition urging Boris Johnson to change the law, hopes her fight will help others in dispute over fertility guidelines.

She said: ‘This is not about me being desperate for grandchildren – my eldest daughter is due to have a baby soon. The law is out of touch and can’t just be one size fits all, so I hope this will also help others. No matter what, this is going to court.

‘Nothing will bring Ellie back but if I can do everything I can to make sure her children can be born one day, it’s important to me. I’m determined they won’t callously destroy her wishes.’