Mother forced to sleep on daughter’s sofa after bungled renovation Divorced mother of three, 56, is forced to sleep on daughter’s sofa and live through ‘absolute nightmare’ after builder left off skirting boards, electrics unfinished in project littered with faults

A mother from Swansea has been left without a roof over her head after renovation works arranged after the death of her parents have been fumbled.

Nichola Evans, 56, had arranged renovation works to be completed using some of the inheritance given to her after her parents died.

Agreeing to a schedule of work that should have lasted 14 weeks and a price tag of £21,370 Nichola moved out while work commenced. 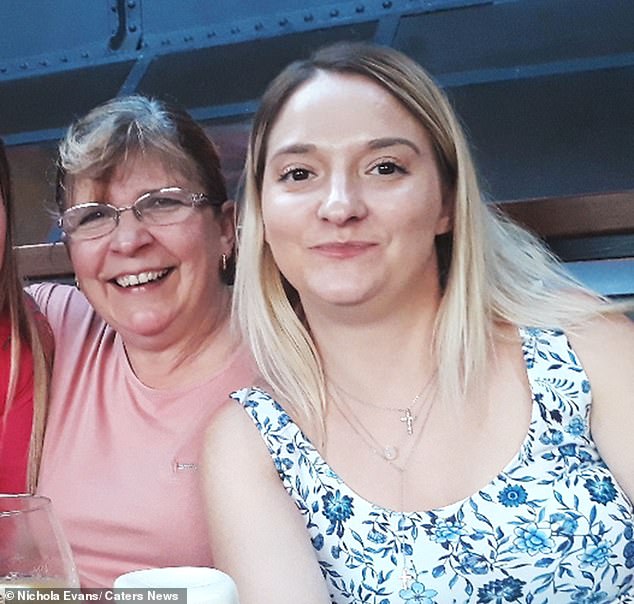 Nichola Evans, 56,(left) and her daughter Katy, 27, have been forced into cohabitation after a builder has left Nichola’s house in a worse state than when he started 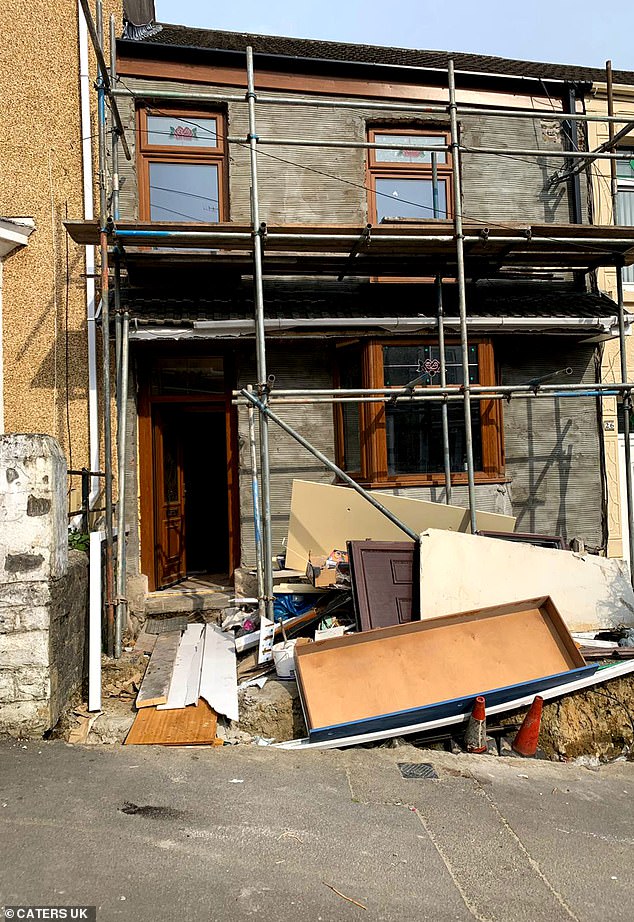 But the dream turned into a disaster for the mum of three when she found out that the house had not been completed – after the cost of the project spiraled to a cost of £31,000.

She has since had to move in to her daughters house and is forced to sleep on the sofa in a bid to keep spiraling costs down.

Nichola said: ‘I’ve been sleeping on my daughter’s sofa since May and I haven’t been able to sleep under my own roof in my own home since February.’

‘It’s been an absolute nightmare, my two dogs and I are living with my daughter in her two bedroom house.’

‘I’ve had break downs, the stress has been terrible, I’ve had sleepless nights.’ 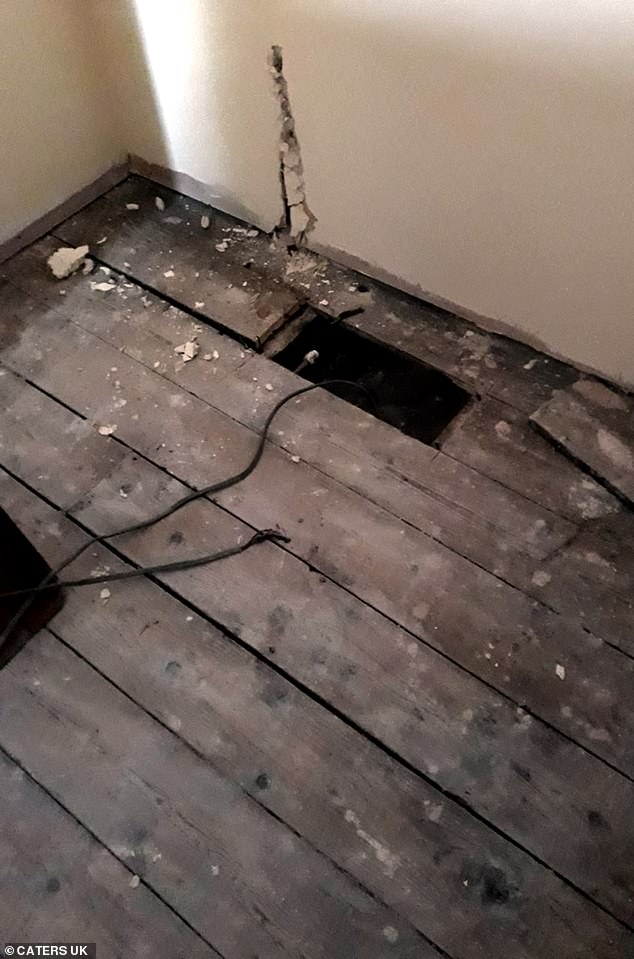 ‘The builder has had total disregard for what he’s done, I can’t put it into words really.’

The work began in February and at the end of the first week Nichola made the first payment of £5,000.

When she asked for an update on the work with the expectation that she would soon be able to move in she was told repeatedly that more time was needed.

She alleges that despite paying money for work to be done on the property much of it was never completed and what work took place was of poor quality. 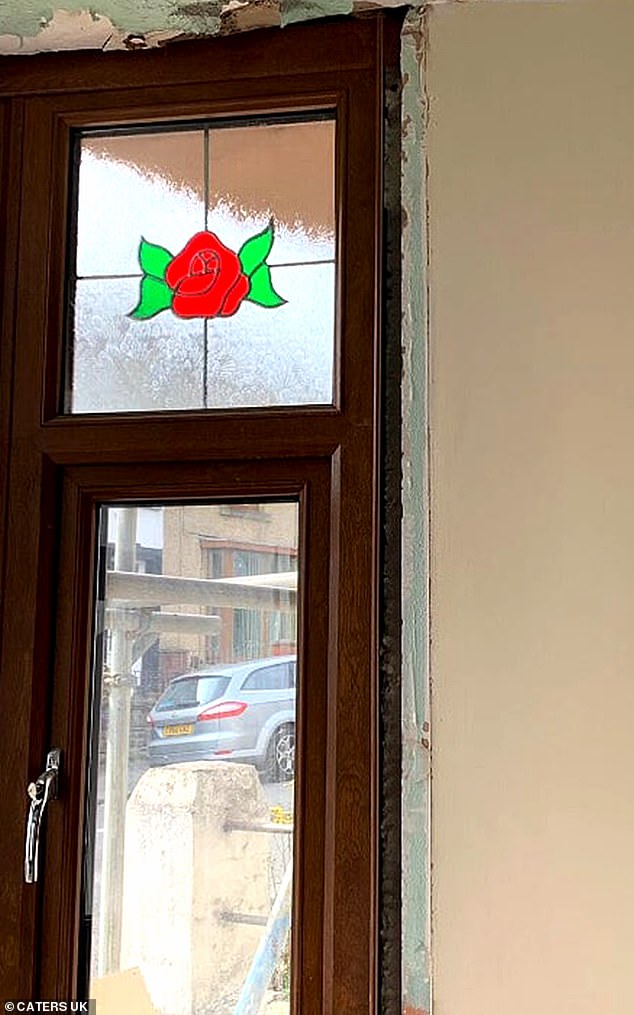 Despite not being as obvious as missing floorboards, Nichola’s windows were left improperly fitted meaning the house won’t hold heat as well and will cost a fortune to keep warm in the coming winter

The costs for the project also increased after the builder informed Nichola that the house had severe damp and required rewiring, increasing the overall cost to £31,000.

‘I thought everything upstairs was fine, I organised for the carpenter to go up and when he came up he told me the skirting board hadn’t been done and the electrics hadn’t been done.’

The house was littered with faults with much of the work that Nichola had been promised incomplete. 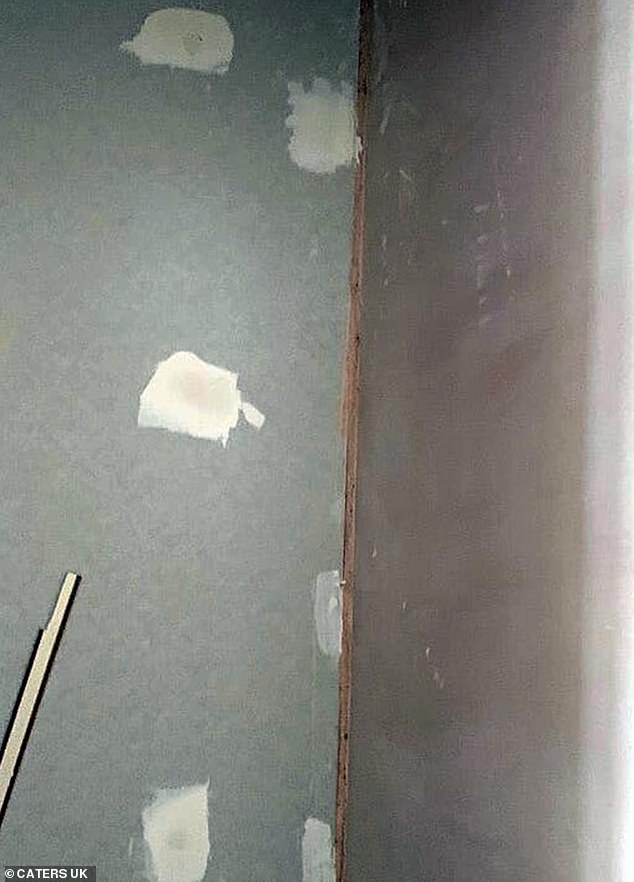 Nichola, who had originally hoped to move into the house in April now

estimates that £20,000 of damage has been caused in the house from the initial building work.

She is currently raising £10,000 on GoFundMe to fund the cost of another builder coming into the house and completing the work so she and her family can finally move in.

Nichola’s daughter, Katy, 27, said: ‘It’s been a nightmare, at first it was exciting for my mum as it was a fresh start, but then it got stressful as we noticed what was happening and then he started taking us for mugs.

‘It’s put a lot of strain on us all, he’s disrespected us and taken us for fools.

What Nichola initially agreed to:

1. Supply skips for all rip out works and rubbish.

2. Hack off and remove chimney breasts, ceilings and walls in back bedroom, front bedroom, staircase and landing. Also remove chimney stack through including ground floor.

3. Full re-wire of property with a registered sign off after completion.

10. Remove all waste from the site

What now needs to be done to fix the mess:

3. Replastering of ceilings in the bathroom, toilet, passage way and below attic bedroom

4. Replastering of seven walls in the house

5. Rewiring of the whole house

6. Replastering of areas around plug sockets

7. New ceiling above the bay window at the front of the house facing the garden

8. New facade to the front of the house

10. All doors in the house need to be replaced.

11. All skirting boards in the house need to be replaced

12. Under-stairs was absolutely terrible, so that had to be redone properly.

14. New laminated floor in the living room and passage way

16. Whole house needs to be repainted

17. Staircase at the top of the house needs to be straightened

18. Instillation of new banister on stairs at the top of the house

19 Installation of box around the boiler

21. Unblocking of back garden drain

25. New cupboard under the sink

27. New tiles in the kitchen