Food rationing is BACK! Morrison’s becomes first supermarket to put limit on number of items customers can buy – with curbs on loo roll and hand gel

Morrison’s has become the first supermarket to reintroduce a limit on the number of items customers can buy over fears of a repeat of the stockpiling panic seen in stores at the start of the pandemic.

Bosses have introduced curbs on loo roll and hand gel with shortages already being reported in stores up and down the country as Britain braces itself for a second wave of coronavirus.

Shelves have been emptied following Boris Johnson’s address to the nation on Tuesday night, in which he outlined a new raft of restrictions which could last for up to six months.

Now Morrison’s is taking steps to avoid the chaotic scenes earlier this year when shoppers stacked trolleys full of precious commodities in case leaving the house became difficult, depriving many others of essentials.

A spokesman told The Grocer: ‘We are introducing a limit on a small number of key products, such as toilet roll and disinfectant. Our stock levels of these products are good, but we want to ensure that they are available for everyone.’

Sainsbury’s introduced a purchasing cap on certain items this year but told MailOnline today no such restrictions were currently in place.

Wholesale shop Costco has this week been inundated with customers with stores in Leeds, London and Manchester seeing a surge in visitors.

Many stores had to erect barriers to regulate the growing queues, and shoppers were seen leaving with overflowing trollies as they stocked up on supplies.

Andrew Opie, director of food and sustainability at the British Retail Consortium, said yesterday: ‘We urge consumers to be considerate of others and shop as they normally would.’

He played down the presence of panic-buying and paid tribute to the ‘excellent job’ of retailers to provide food during the pandemic. 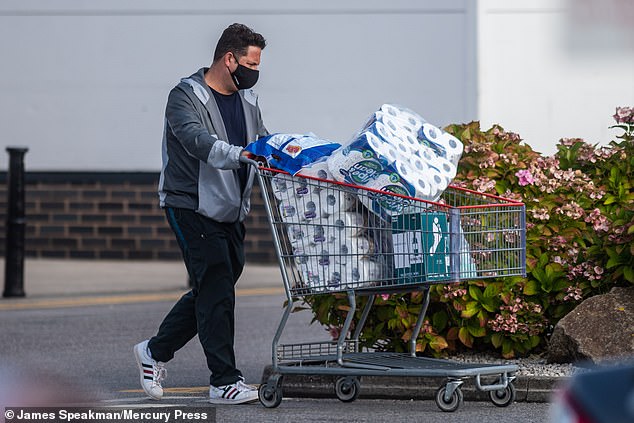 Reassuring the public, he added: ‘Supply chains are stronger than ever before and we do not anticipate any issues in the availability of food or other goods under any future lockdown.’

But supermarkets are bolstering security at their doors and have doubled the number of delivery slots.

Meanwhile, Asda has announced 1,000 new safety marshals to help enforce the Government’s advice to wear and face mask and will give sanitised baskets and trolleys to customer as they enter the store.

Tesco, Asda and Waitrose have been approached for comment on purchasing limits.