More than 100 homeless, disenfranchised people given COVID vaccines at Vatican 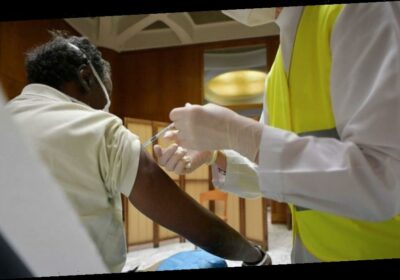 More than 100 people who are homeless were given their first dose of the COVID-19 vaccine at the Vatican, the papal city-state announced Wednesday.

The Papal Almoner, Cardinal Konrad Krajewski, who is in charge of carrying out works of mercy on behalf of the pope, welcomed the group into the Paul VI Audience Hall, which has been set up as a vaccination facility inside Vatican City and is where Vatican residents, including cardinals and church officials, have been vaccinated since the Vatican started their vaccination program.

Over a thousand more of the most vulnerable people living in Rome will receive the vaccination in the coming days leading to Easter, accompanied by volunteers from charities.

On Friday, Krajewski announced in a statement that a total of 1,200 “poor and most marginalized people” would be vaccinated in the Vatican during Holy Week “to reinforce the Holy Father’s numerous appeals to ensure that no one be excluded” from receiving the vaccine.

All will receive the same Pfizer-BioNTech vaccine administered to the pope and other Vatican residents. Pope Francis and Pope Emeritus Benedict XVI received their first vaccine dose at the start of the Vatican’s vaccination campaign and their second dose in February.

In Friday’s statement, the cardinal repeated the pope’s “heartfelt appeal” made at Christmas during his Urbi et Orbi blessing in which he said: “I ask everyone — government leaders, businesses, international organizations — to foster cooperation and not competition, and to seek a solution for everyone, vaccines for all, especially for the most vulnerable and needy of all regions of the planet. Before all others, the most vulnerable and needy.”

The pope has strongly reiterated that “everyone must have access to the vaccine, with nobody being excluded because of poverty.'” He said that “in the face of a challenge that knows no borders, we cannot erect walls. All of us are in the same boat.”

Last January, when the COVID vaccination campaign began in the Vatican, Pope Francis requested that fifty needy people, mostly homeless, who live around St. Peter’s Square and who are assisted daily and given shelter in residence facilities run by the Office of Papal Charities, be among the first vaccinated.

Friday’s statement also appealed to people to make online donations at www.elemosineria.va to help the Vatican continue its work with “our poorest and most vulnerable brothers and sisters, and to give them the opportunity to access treatment and vaccination.”

The Pope has repeatedly encouraged people to get vaccinated as a way of exercising responsibility toward one’s neighbor He is preparing to celebrate his second Easter inside the Vatican during this coronavirus pandemic, without the traditional crowds due to COVID restrictions and with the whole of Italy under the strictest lockdown for the holiday weekend.