Thousands of monkeys are terrorising a Indian city with frequent attacks on tourists and farms after sterilisations and illegal poisonings failed to stop them.

Most of the macaques in Shimla, Himachal Pradesh, left the city for the countryside to look for food during India’s nationwide coronavirus lockdown.

But the monkeys have returned to bully inhabitants and snatch grocery bags as lockdown restrictions have eased.

Up to 50 troops of hungry monkeys now prowl the former colonial British summer escape in the Himalayan hills.

The city of 160,000 people has long been a major draw for tourists seeking to avoid India’s summer heat but food waste they leave behind has become a magnet for the macaques. 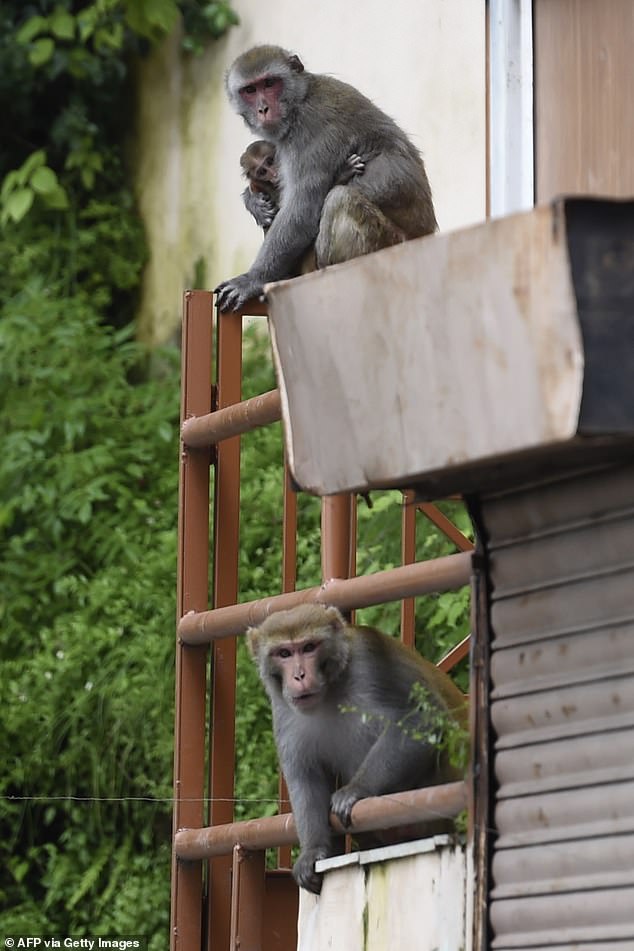 Thousands of monkeys are terrorising Shimla, in Himachal Pradesh, India, with frequent attacks on tourists and farms after sterilisations and illegal poisonings failed to stop them 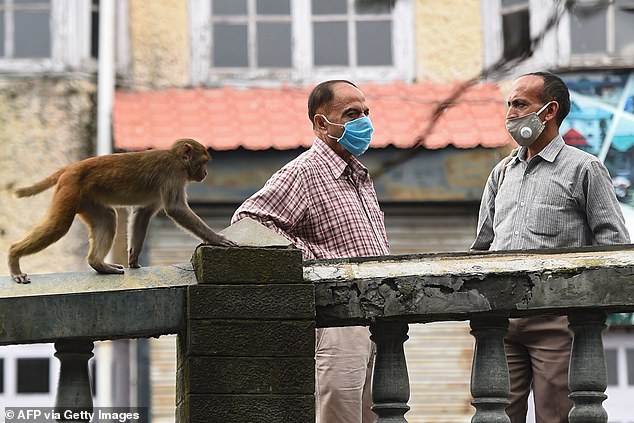 Authorities have struggled to control the monkeys, who have become increasingly aggressive in their hunt for food 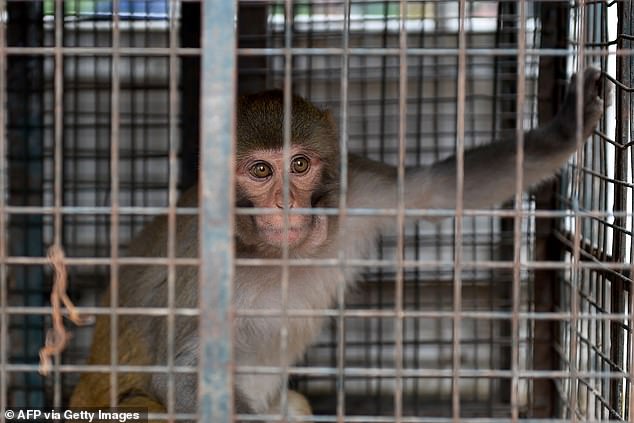 Nand Lal, 46, showed his wounds from one altercation with the animals this month, which required multiple anti-rabies injections afterwards.

She said: ‘I was passing a group of monkeys when the dominant male suddenly attacked me and three others piled in.

‘Luckily I could grab a stick and fight them off. I had bruises all over my face and head. I was bleeding from a bite on my back.’

Days after the assault, Lal said, he could still hear the ‘chattering’ of his attackers and the two dozen other monkeys that watched. 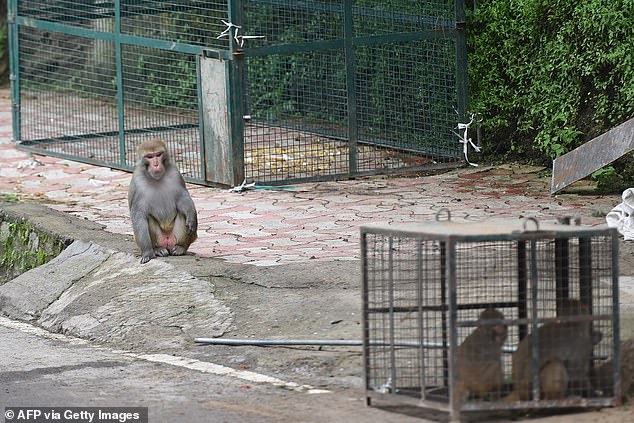 A monkey looks at other monkeys in a cage, which were caught by officials from the Forest Department of Shimla in a residential area in August 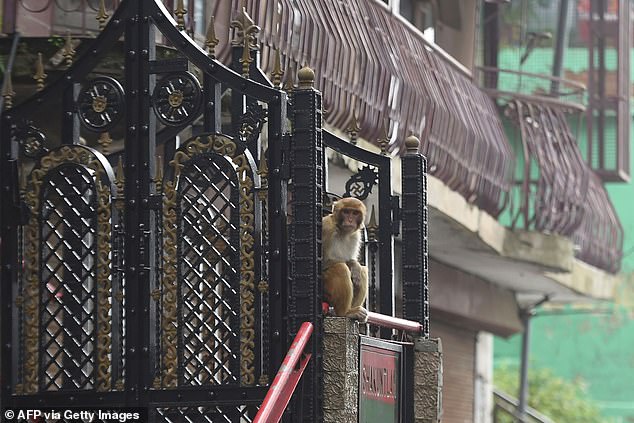 Some residents of the town have been metal cages over their terraces and windows to keep out the invaders, who have even been known to steal from refrigerators

‘People are very scared and they don’t know what to do,’ according to retired High Court judge Kuldeep Chand Sood, who pointed to a bite in his leg inflicted as he sat reading on the terrace of his home.

Speaking at his home in the macaque-infested Sanjauli district, he said: ‘I was just going through my book when suddenly a big monkey attacked and bit me.’

Many Sanjauli homes now have metal cages over their terraces and windows to keep out the invaders, who have even been known to steal from refrigerators. 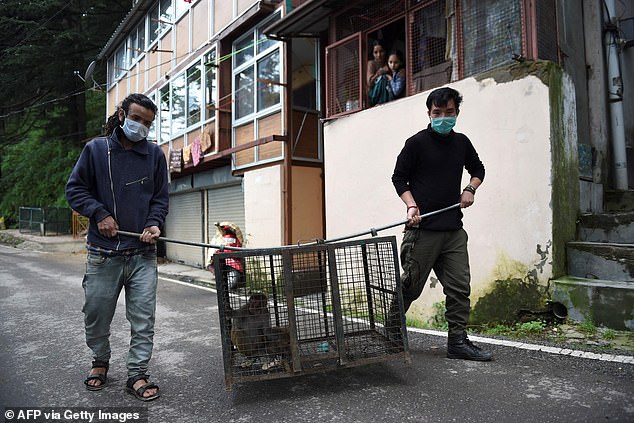 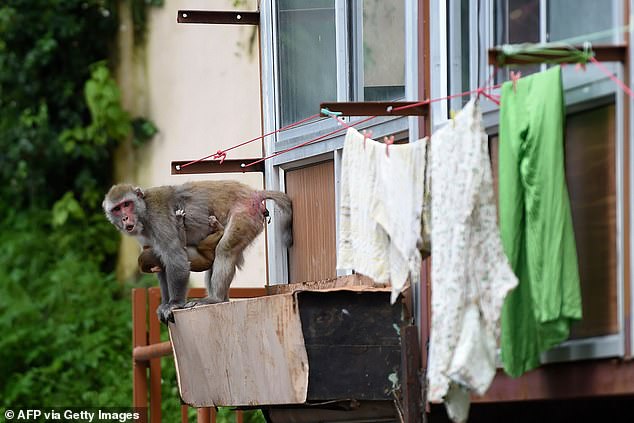 A monkey and her baby stand underneath a washing line in Shimlain, Himachal Pradesh, in August

Improving rubbish collection has meant ‘the monkeys are finding it harder’.

She said: ‘But their habits are the same. They now try to snatch any packet they see in anyone’s hand.

‘If they don’t find it, they try and bite someone.’

Even tourists at the Jakhoo temple, which holds one of India’s largest statues of the monkey god Hanuman, have had glasses and other shiny items stolen. 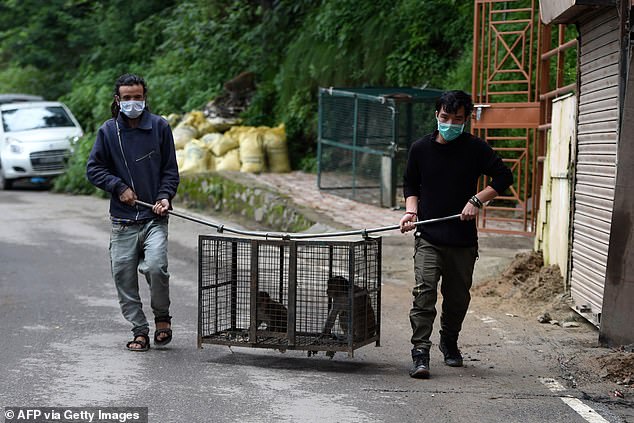 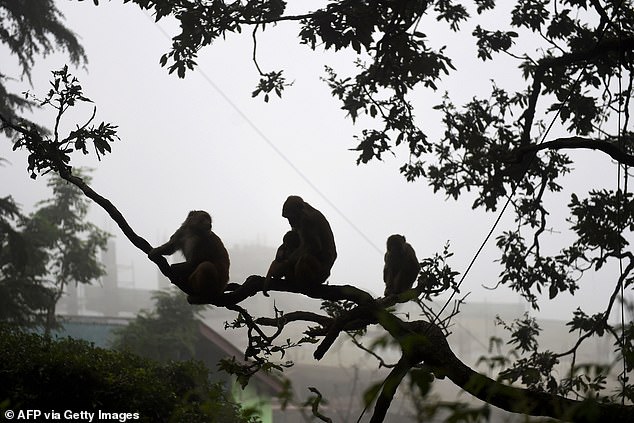 As coronavirus restrictions have eased, troops of monkeys have returned to Shimla to bully inhabitants and snatch grocery bags

When not targeting humans, the estimated 130,000-plus monkeys in the state are stealing or destroying millions of dollars of fruit and crops each year from farms.

While Hindus consider monkeys sacred, the government has now declared the animals can be killed if they threaten property.

Official extermination campaigns are yet to be launched, but farmers have illegally poisoned hundreds of the animals.

In Shimla and other towns in the state, the authorities have sought to sterilise the monkeys in a bid to bring numbers down. 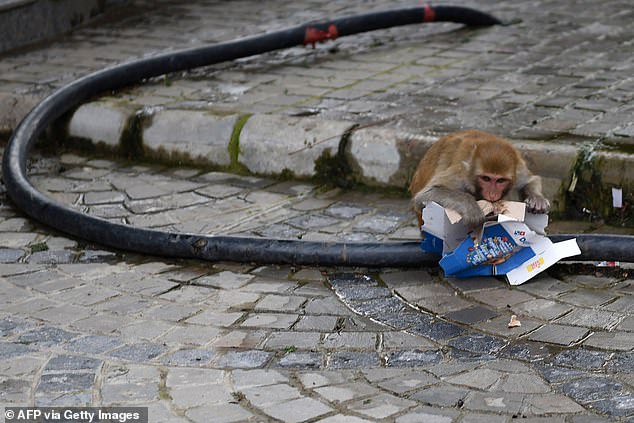 The city of 160,000 people has long been a major draw for tourists seeking to avoid India’s searing summer heat but the food waste they leave behind has become a magnet for the monkeys 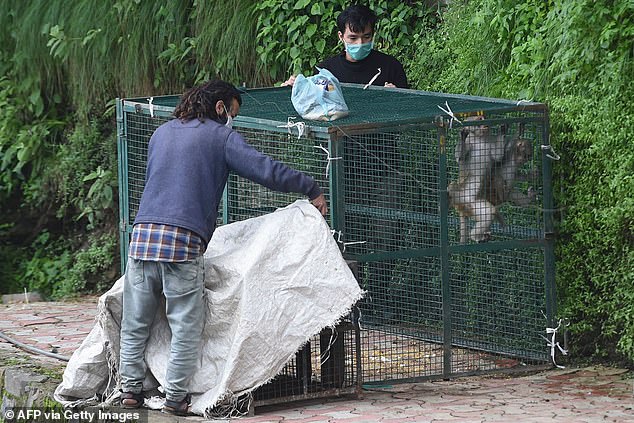 About 157,000 of the animals have been sterilised across Himachal Pradesh in recent years, in what one expert said was the ‘only way’ to bring the problem under control.

Shimla monkey sterilisation centre specialist Pooja Kanwar said: ‘If we kill monkeys like some who poison monkeys, that can pose a threat to humans and other wild animals as well.’

But monkey catchers say the animals are increasingly wise to their tactic of leaving bananas and bread in cages to trap them.

Mr Sharma said: ‘When a monkey is caught, it alerts the others.’