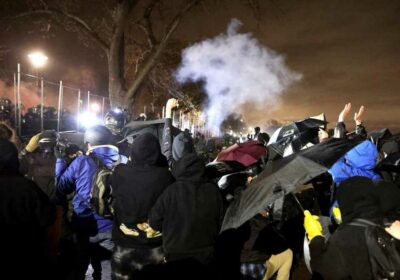 The truth about ‘racism’ & cops: Devine

Tempers flared on Wednesday during a fourth straight night of protests outside a Minnesota police station in response to the cop-killing of Daunte Wright.

Police declared an unlawful assembly and ordered hundreds of demonstrators to disperse from the Brooklyn Center precinct ahead of the city’s 10 p.m. curfew, according to footage posted to Twitter by journalist Max Nesterak.

The precinct has been the site of nightly protests since Wright, 20, was fatally shot by former officer Kimblerly Potter during a Sunday afternoon traffic stop.

Police have said Wright was pulled over for expired tags, but they sought to arrest him after discovering he had an outstanding warrant.

During the stop, Wright broke away and got back in his car, where he was shot by Potter before speeding off and crashing farther down the road — where he was pronounced dead.

Police said the officer mistakenly grabbed her service weapon instead of her Taser and fired a single, fatal shot.

Potter, 48, resigned from the force Tuesday and was charged Wednesday with second-degree manslaughter.