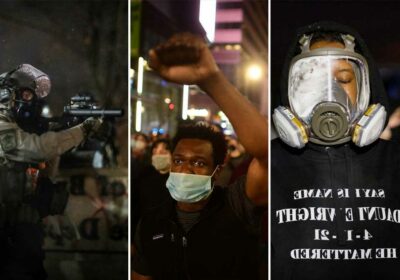 An unlawful assembly was declared by police after 9 p.m., ahead of a 10 p.m. curfew in the Twin City suburb, according to footage tweeted by MPR News.

Protesters threw water bottles at police in response in defiance of the order to disperse, a clip from The Star Tribune showed.

By 9:20 p.m., officials had cleared protesters from one area of the police station they were gathering in front of, according to video from KSTP.

Earlier, thousands of protesters reportedly peacefully marched to an FBI headquarters, with signs demanding justice for the killing of the 20-year-old black man during a Sunday traffic stop.

Officer Kimberly Potter shot Wright dead after she said she confused her gun for her Taser. Potter and Brooklyn Center Police Chief Tim Gannon resigned in the wake of the shooting.

More than 50 protesters and looters were arrested during violent Monday night demonstrations as hundreds defied a 7 p.m. curfew and attacked law enforcement officials in riot gear.

Wright’s death was the third high-profile killing of a black man by police in the Minneapolis area in five years, following the deaths of George Floyd and Philando Castile.

Family members of Floyd joined Wright’s family in solidarity Tuesday, at a press conference posted by Global News, to call for charges against Potter. Minneapolis cop Derek Chauvin is currently on trial for murder in connection with Floyd’s death.

“He said they pulled him over because he had air fresheners hanging from the rearview mirror,” Wright’s mother Katie Wright, who was on the phone with him during the traffic stop, said.

“I heard the phone get either put on the dashboard or dropped, and I heard scuffling, and I heard the police officers say, ‘Daunte, don’t run.’ And then the other officer said, ‘Put the phone down,’” Wright said of the moment before her son was shot dead.