MILLIONS of Americans will lose their unemployment benefits at midnight Saturday unless President Donald Trump signs the coronavirus relief bill.

Trump instigated a standoff over stimulus checks with Congress with his drawn-out refusal to sign the bipartisan package over its "measly" $600 checks, agreed to by Republicans, and his sudden complaints about "pork." 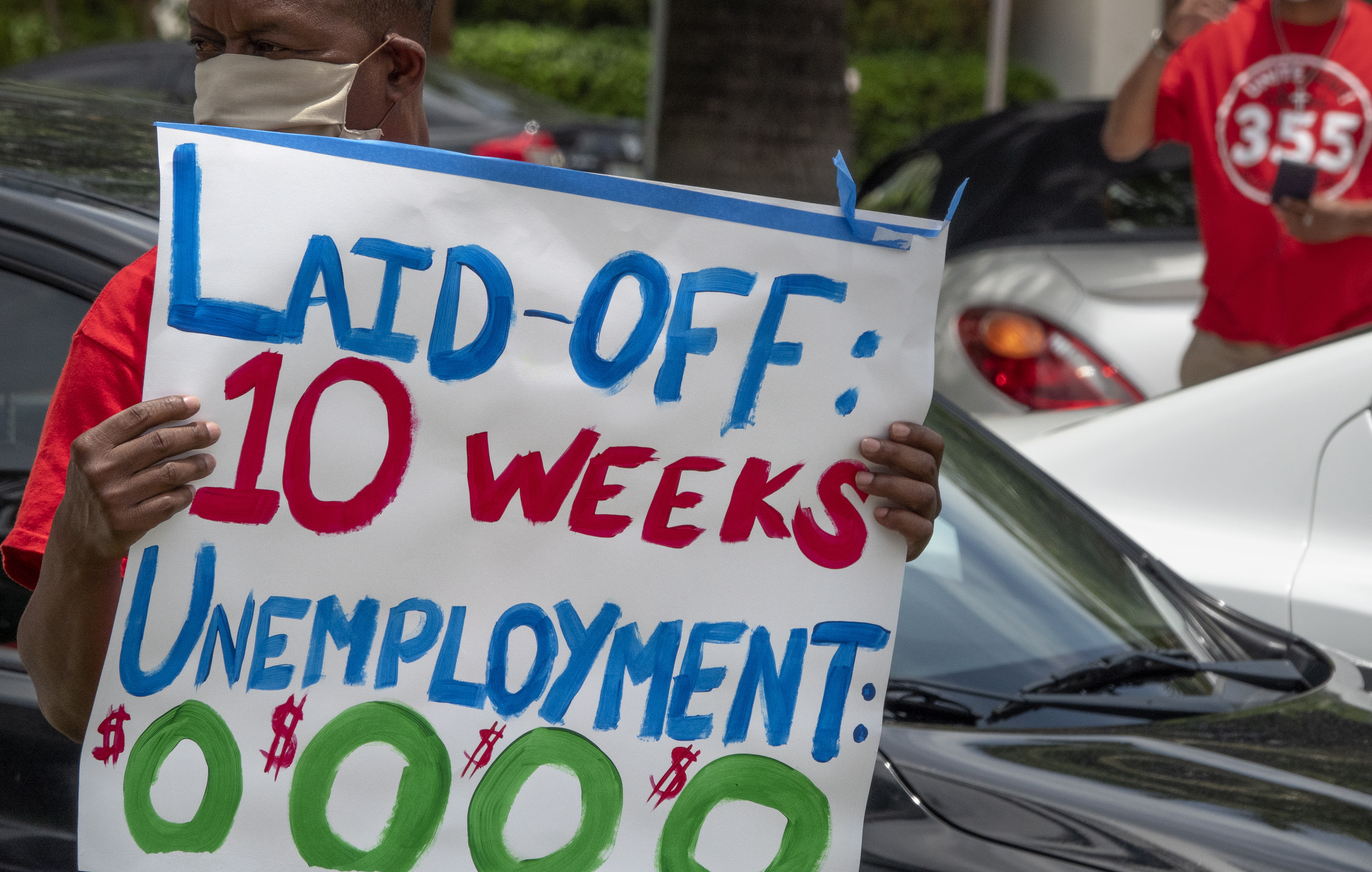 Lanetris Haines, a self-employed single mother of three in South Bend, Indiana, will lose her $129 weekly jobless benefit unless Trump signs the package into law or wins his Quixotic quest, the Associated Press reported.

“It’s a chess game and we are pawns,” she said.

Policians have been baffles since Trump revealed his eleventh-hour objections to the bill and demands for $2,000 stimulus checks — which Republicans quickly rejected.

Trump, who has still not committed to a formal veto, spent Christmas Day golfing while railing against the bill — which is attached to a $1.4trillion government funding package that will force a federal government shutdown if not signed. 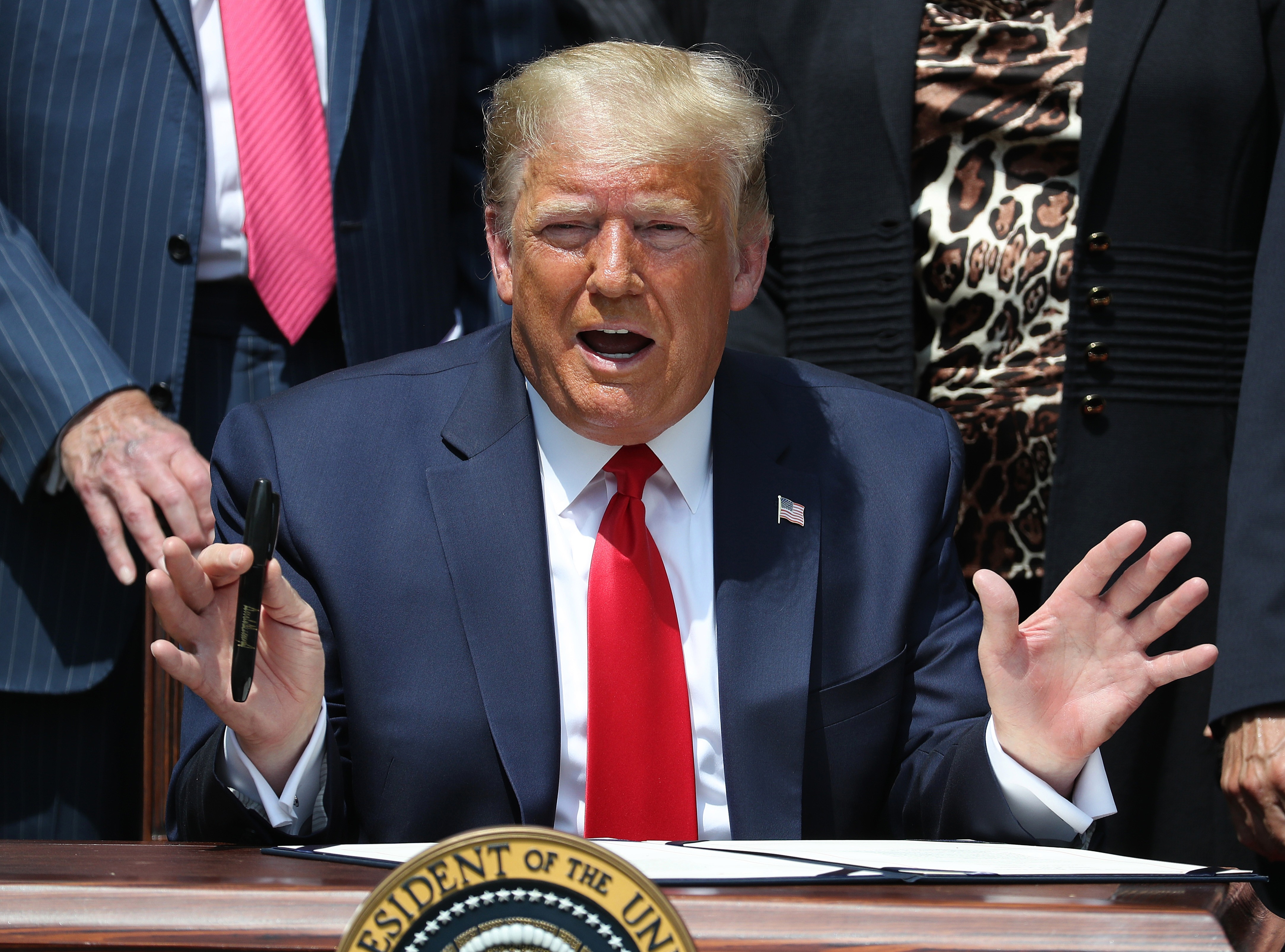 “I simply want to get our great people $2000, rather than the measly $600 that is now in the bill,” Trump tweeted on Saturday from Palm Beach, Florida. “Also, stop the billions of dollars in ‘pork.’”

President-elect Joe Biden slammed Trump for an “abdication of responsibility” and demanded that the president sign the COVID-19 Economic Relief Bill on Saturday to prevent “devastating consequences.”

“It is the day after Christmas, and millions of families don’t know if they’ll be able to make ends meet because of President Donald Trump’s refusal to sign an economic relief bill approved by Congress with an overwhelming and bipartisan majority,” Biden said in a statement. 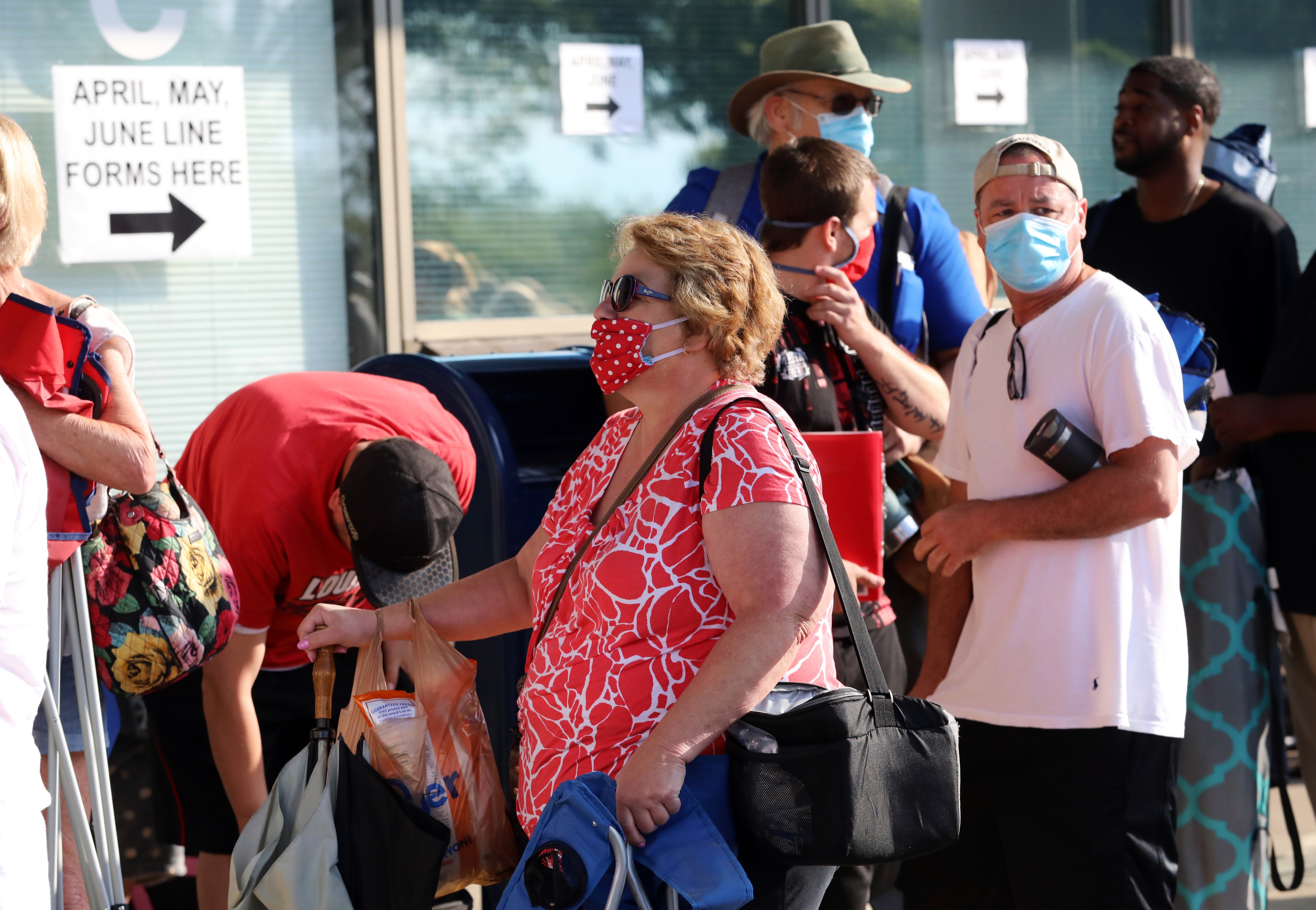 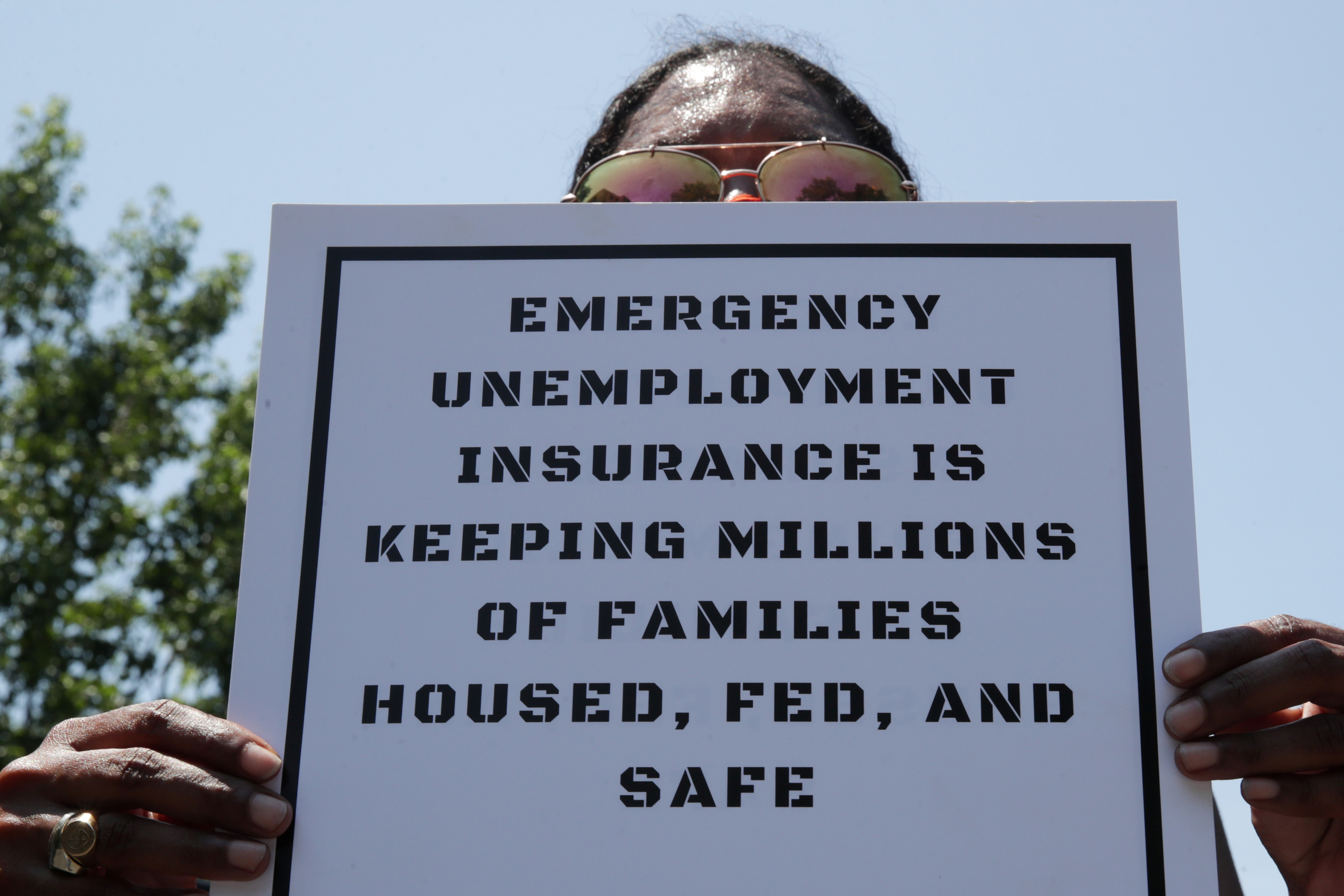 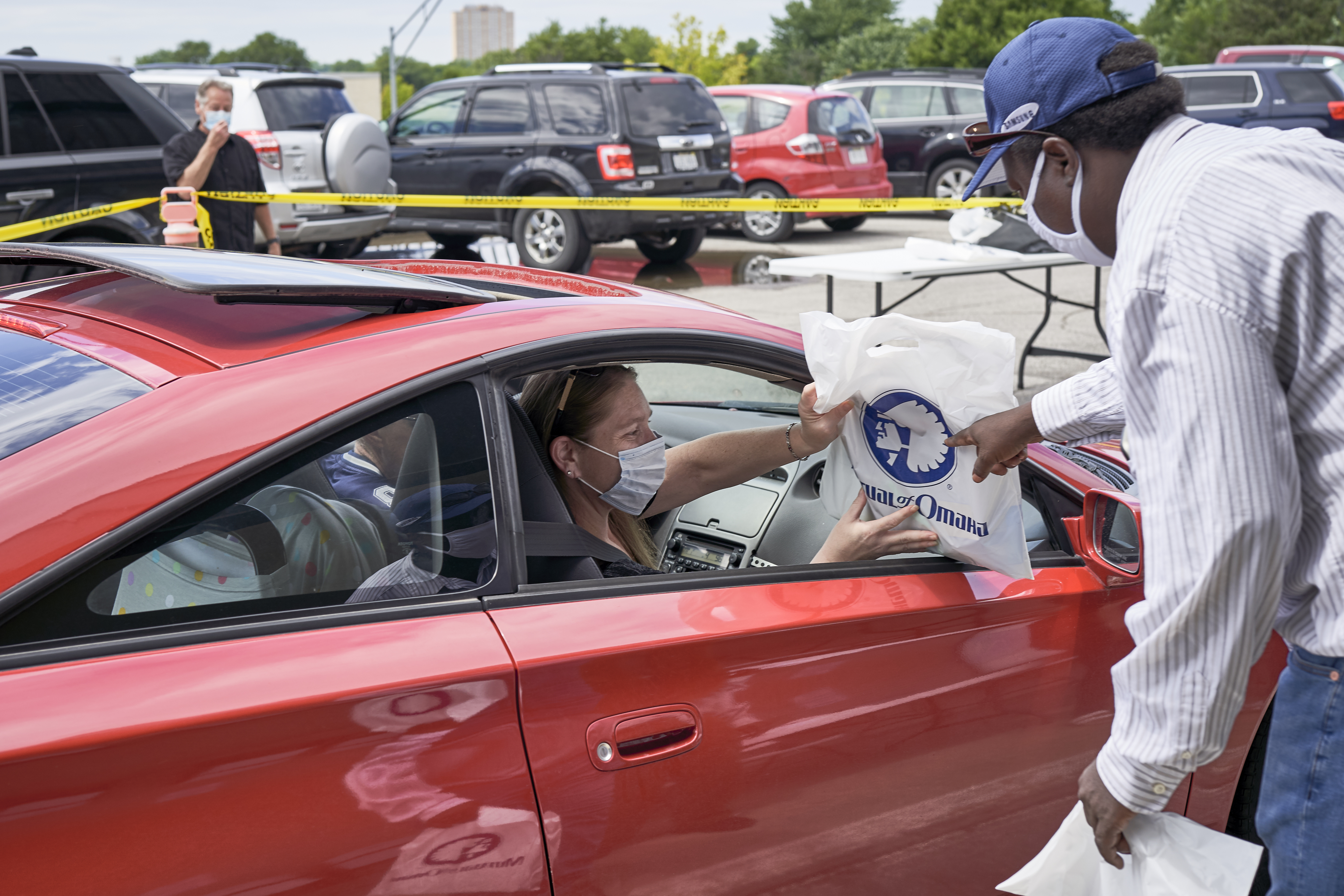 About 10 million Americans will lose unemployment insurance benefits and government funding will expire in just a few days, putting paychecks for military personnel at risk, according to Biden. A moratorium on evictions will expire within a week causing people to be forced from their homes.

“This bill is critical. It needs to be signed into law now,” Biden said.

Rep. Debbie Dingell, a Michigan Democrat, told the Associated Press that people are "scared they’re going to be kicked out from their homes, during the Christmas holidays, and still might be if we don’t sign this bill."

Lauren Bauer, a fellow in economic studies at the Brookings Institution, has calculated that 11 million people would lose aid from the programs immediately without additional relief; millions more would exhaust other unemployment benefits within weeks.

Andrew Stettner, an unemployment insurance expert and senior fellow at the Century Foundation think tank, said the number may be closer to 14 million because joblessness has spiked since Thanksgiving.

“All these folks and their families will suffer if Trump doesn’t sign the damn bill,” Heidi Shierholz, director of policy at the liberal Economic Policy Institute, tweeted Wednesday.

How and when people are affected by the lapse depends on the state they live in, the program they are relying on and when they applied for benefits.

In some states, people on regular unemployment insurance could continue to receive payments under a program that extends benefits when the jobless rate surpasses a certain threshold, Stettner said.

About 9.5 million people, however, rely on the Pandemic Unemployment Assistance program that expires altogether Saturday.

That program made unemployment insurance available to freelancers, gig workers and others who are normally not eligible. After receiving their last checks, those recipients will not be able to file for more aid after Saturday, Stettner said.

While payments could be received retroactively, any gap means more hardship and uncertainty for Americans who have already grappled with bureaucratic delays, often depleting much of their savings to stay afloat while waiting for payments to kick in.

They are people like Earl McCarthy, a father of four who lives in South Fulton, Georgia, and has been relying on unemployment since losing his job as a sales representative for a luxury senior living community.

McCarthy said he will be left with no income by the second week of January if Trump fails to sign the bill and he has already burned through much of his savings as he waited five months to begin receiving his unemployment benefits.

“For me, I shudder to think if I had not saved anything or had an emergency fund through those five months, where would we have been?” he said. “It’s going to be difficult if the president doesn’t sign this bill.”

Sharon Shelton Corpening had been hoping the extra help would allow her 83-year-old mother, with whom she lives, to stop eating into her social security payments to make their $1,138 rent.

Corpening, who lives in the Atlanta area, had launched a freelance content strategy business that was just taking off before the pandemic hit, prompting several of her contracts to fall through.

She is receiving about $125 a week under the pandemic unemployment program and says she will be unable to pay her bills in about a month. This, despite her temporary work for the U.S. census and as an elections poll worker.

“We on the brink,” said Corpening, who lobbies for Unemployment Action, a project launched by the Center for Popular Democracy to fight for relief. “One more month, if that. Then, I run out of everything.”

Trump also lashed out Saturday at Republicans who have failed to join his quest to try to overturn the results of the election with baseless claims of mass voter fraud that have been repeatedly rejected by the courts.

“If a Democrat Presidential Candidate had an Election Rigged & Stolen, with proof of such acts at a level never seen before, the Democrat Senators would consider it an act of war, and fight to the death,” he railed.

He said Senate Majority Leader Mitch McConnell and his Republicans “just want to let it pass. NO FIGHT!”

"More help is on the way. Moments ago, in consultation with our committees, the four leaders of the Senate and House finalized an agreement for another major rescue package for the American people,” McConnell said. 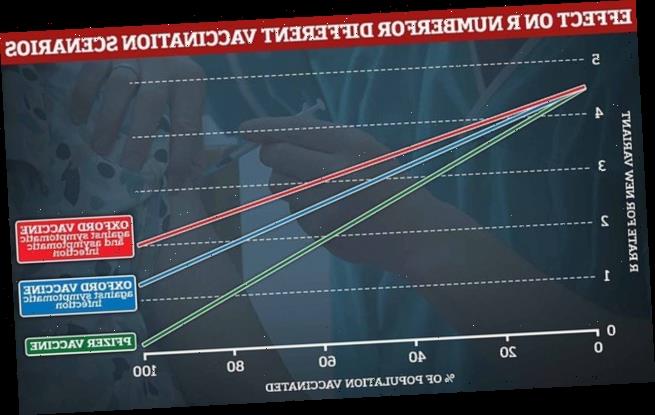