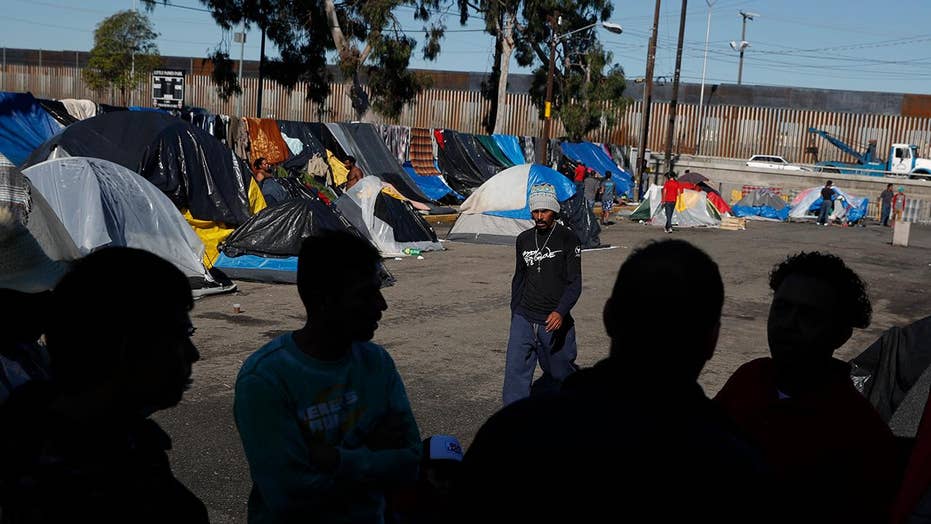 SAN DIEGO – Thousands of asylum-seeking migrants from Central America are starting to pick up day jobs in Mexico as they wait for their shot at legal entry into the United States.

Even though America is the ultimate goal, migrants including 20-year-old Josue Pineda understand it can take up to several months to get the asylum process rolling.

“Most of these people are still dreaming of America, but if there’s a chance to get a job here, there’s no way I’m not going to take it,” the Honduran migrant told NPR recently.

Pineda and hundreds of other migrants spend their mornings looking for work.

Most days they won’t know where they’re going or when they’ll be back. In a majority of cases, they’re just happy to leave the stifling conditions of the overcrowded, grimy shelters at the border. And, they get to pick up some cash to make their lives easier while waiting for asylum.

“Here you make a little money,” said Nelson Davis Landaverde, a 21-year-old Honduran man who was out looking for food for his 1 ½-year-old son when someone asked him if he wanted to work at a car wash. He didn’t hesitate and took it. He could earn 75 cents per car – so if he washes 10 cars a day, he’ll make more than Mexico’s minimum wage which is around $4.35 per day.

Since thousands of Central Americans marched into Mexico a few months ago, setting up temporary housing has become a problem. Officials recently closed the shelter near the border and relocated many of the migrants to another location deeper inland. Hundreds, though, refused to leave and have set up makeshift camps and tents. They've said it’s easier to find jobs nearby if they stay put.

Migrants looking for longer-term jobs have gathered at a downtown location to begin paperwork for temporary visas in Mexico allowing them to work legally. Once they get their Mexican identification numbers, they can meet with recruiters for spots at assembly plants, where turnover is high and jobs are up for grabs.

In November, the Baja California state government even launched a month-long job fair, mostly for manufacturing positions along the border.

Francisco Iribe Paniagua, the state's labor secretary, told the Arizona Republic the idea for the job fair came after Haitian migrants swarmed the Tijuana area two years ago. When officials tried out a job fair program, many ended up staying and becoming productive residents in the city.

"They had also come with the purpose (of seeking asylum in the U.S.), but the reality on the ground forced many of them to stay in Baja California," he told the newspaper. "This time around we're acting more quickly, taking advantage of that experience."

Attendance at a job fair set up to help the migrants find work has surged since a Nov. 25 march on the U.S. border devolved into chaos as some migrants rushed toward the border and U.S. agents responded by firing tear gas into Mexico. Before the march, only about 100 migrants were showing up each day, a number that has grown to 400 or more since.

HONDURAN WOMAN, 19, IN MIGRANT CARAVAN SCALES WALL TO GIVE BIRTH IN U.S.

U.S. officials announced Monday they will start withdrawing many of the active-duty troops that President Trump ordered to the U.S.-Mexico border in response to the caravan. About 2,200 of the active duty troops will be out before the holidays. The move by the Trump administration to beef up the military just before the midterm election was viewed by some as a political stunt and a waste of military resources.

“Some units have completed their mission and they have already started to partially redeploy. Other units have been identified to rotate home and will be returning home over the next several weeks,” Manning said.

Fox News’ Travis Fedschun and The Associated Press contributed to this report.