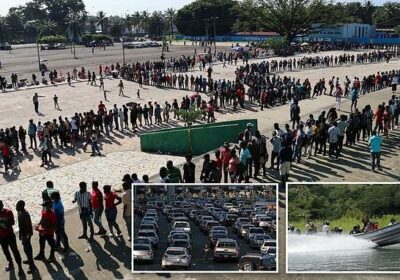 The rise of the middle class migration: South American families are flying to Mexico, getting a cab and crossing illegally into US, Yuma border chief claims

While hundreds of thousands of poor migrants seeking asylum in the U.S. have trekked on foot from South and Central America in the last eight months, there has also been a rise in middle class migrants flooding the southern border.

These so-called middle class migrants often fly to Mexico’s northern border on pre-planned flights and cross into the U.S. by cab or another car hire, a Border Patrol chief in Arizona told the Wall Street Journal.

‘They got off the plane and went to a cab or to a bus,’ Chris Clem, Border Patrol’s chief patrol agent in Yuma, said.

‘They literally were driven up and just walked up and turned themselves over to us,’ he said in describing the last leg of more affluent migrants’ trip over the U.S.-Mexico border.

Clem said that his team regularly encounters migrants who claim they took flights to a northern Mexican border city before crossing illegally into the U.S.

While many migrants from more poor countries, like Haiti and Northern Triangle Nations, are seeking asylum in the U.S. to escape conditions in their nation, it seems increasingly so that middle class migrants are doing the same.

The majority of illegal crossers who come to the U.S. through Mexico’s border are coming from the world’s poorest countries and are fleeing poverty and crime.

While thousands of migrants fleeing economic poverty and political instability flee to the U.S., other middle class migrants are also coming to the southern border, a new report reveals. Here Haitian migrants wait for asylum claim processing in Mexico on Tuesday

Some of these middle class migrants fly to a Mexican border town on pre-planned flights, take a cab to the border and walk across to turn themselves into authorities. Here Border Patrol apprehends a group of Brazilian migrants who illegally crossed into Otay Mesa, California on Wednesday

The recent influx of more affluent migrants appears to be indicative of the economic aftershocks as part of the COVID-19 pandemic pushing some to seek refuge in the U.S. who may have not sought this revenue in the past.

South America and the Caribbean lost around 26 million jobs last year, according to the International Monetary Fund.

Brazil is also experiencing some of the pandemic highest mortality rates – recently surpassing 600,000 COVID-related deaths, which is second only to the U.S.

Brazil and Venezuela have seen severe economic downturns and political instability related to the COVID pandemic.

He added: ‘It’s a big deal to go from being middle class in your country to be undocumented in the United States.’

Since Joe Biden took office, Customs and Border Protection has encountered more than 1.2 million migrants at the southern border.

August was the first month the number of encounters decreased since Biden became president, still reaching a whopping 208,887 – down from the July figure of 213,534.

Many migrants from countries outside of MExico, El Salvador, Guatemala and Honduras have not been turned back – at least from the Yuma sector – because Mexican authorities won’t accept them.