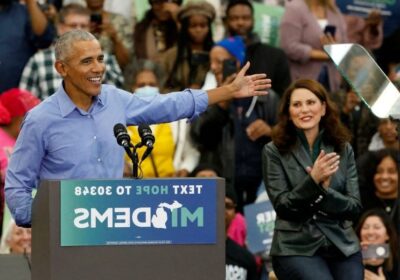 As time dwindles down to the upcoming midterm elections, the Democrats are pulling out assistance from their heavy weights, including beloved first Black President: Barack Obama.

The former president hit the campaign trail hard pushing for Americans to keep the blue party in power for at least the next two year.

In a brief interaction, Americans were reminded of the charm of Obama that we were introduced to during his 2008 election campaign.

A Twitter user shared the clip captured by MSNBC of the former president addressing the audience at Detroit Renaissance High School gymnasium on Saturday. Obama explained how tiring running for public office can be saying, “sometimes going on a campaign trail feels a little harder than it used to, not just because I am older and grayer….”

As the crowd erupted in laughter at his remark, a woman who sat behind the speech podium chimed in and said, “You fine as mug.”

The 61-year-old graciously blushed as he turned around and asked the woman to repeat what she said. The Detroit crowd laughed. Obama later joked “I’m not gonna tell Michelle [Obama] you said that.”

“Although Michelle does agree,” he continued. “She knows.”

Earlier this month, Obama and the “forever FLOTUS” Michelle, 58, shared on social media a photo from their early voting location in hopes of encouraging Americans to make their voices heard this election season.

“Barack’s in my #VotingSquad — who’s in yours? Tag them below and remind them to register and make a plan to vote,” she tweeted.

According to the US Elections Project, Americans are casting early midterm ballots at record rates. The organization suspects roughly 9.4 million Americans have already voted.

During the 2018 midterm,  it was the highest turnout rate for a midterm election in more than a century, Time reported. This year could be even higher.