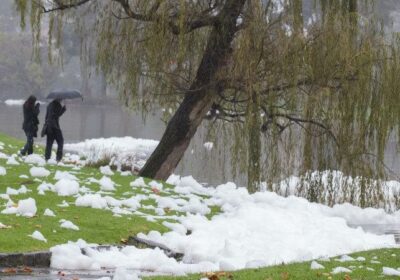 It looks a bit like a giant bubble bath, however authorities are investigating the cause of mysterious foam at Merri Creek in the city’s north after a night of heavy rain.

Coburg Lake Reserve was covered in clouds of fluffy white bubbles on Tuesday morning following an overnight drenching that included almost nine millimetres of rain in one 30-minute burst. 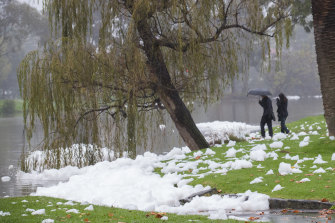 The Environmental Protection Agency said it was investigating the source of the bubbles and asked for anyone with information on pollution in the area to get in contact.

Passerby Alison who was riding to Fawkner said the foam had moved down the Merri Creek into Coburg Lake, which “looked like a bubble bath”.

“The lake was completely covered in froth,” she said.

“It’s quite devastating, people work hard to look after the flora and fauna there.” 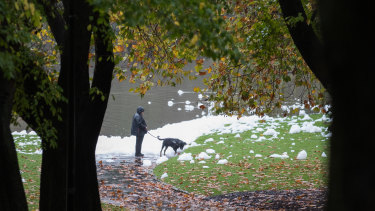 The EPA are investigating the source of the foam. Credit:Jason South

Melbourne was hit with 15.8mm of rain in the 24 hours from 9am on Monday, with the large majority of that falling while people were sleeping.

The heaviest falls came between 10.30pm and 11pm, when 8.8mm was recorded at Melbourne’s Olympic Park observation station.

Miriam Bradbury, duty forecaster at the Bureau of Metrology, said that a cold front had moved across Victoria on Monday bringing rainfall to most parts of the state.

“Certainly in Melbourne, it has eased off. We’ve definitely had the worst of it,” she said.

“The eastern suburbs could see another millimetre or so.”

With winter just a few weeks away, there’s more rain around the corner with a series of cold fronts due on the weekend.

“What it means is we will see these cold showery breezy conditions basically from Thursday into next week,” she said.