Melbourne shoppers have flocked to a city market in a shocking display of defiance of social distancing and the city’s extreme Stage 4 lockdown.

As police and soldiers converged on surrounding streets to mark the first day of the hard lockdown, hundreds of shoppers packed into a popular inner-city market.

The Queen Victoria Market, on the outskirts of the CBD, was bustling with people on Thursday as shoppers ventured out of their homes under glorious winter sunshine to rub shoulders with masked strangers.

Daily Mail Australia saw scores of market shoppers thumbing their noses at social distancing laws while picking up fresh fruit and vegetables in the outdoor section of the market. 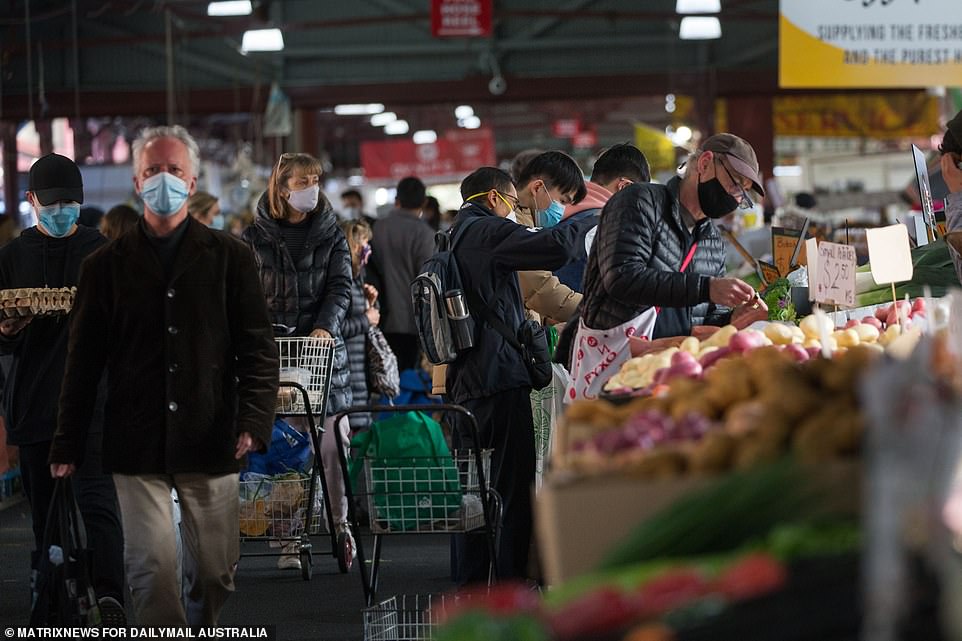 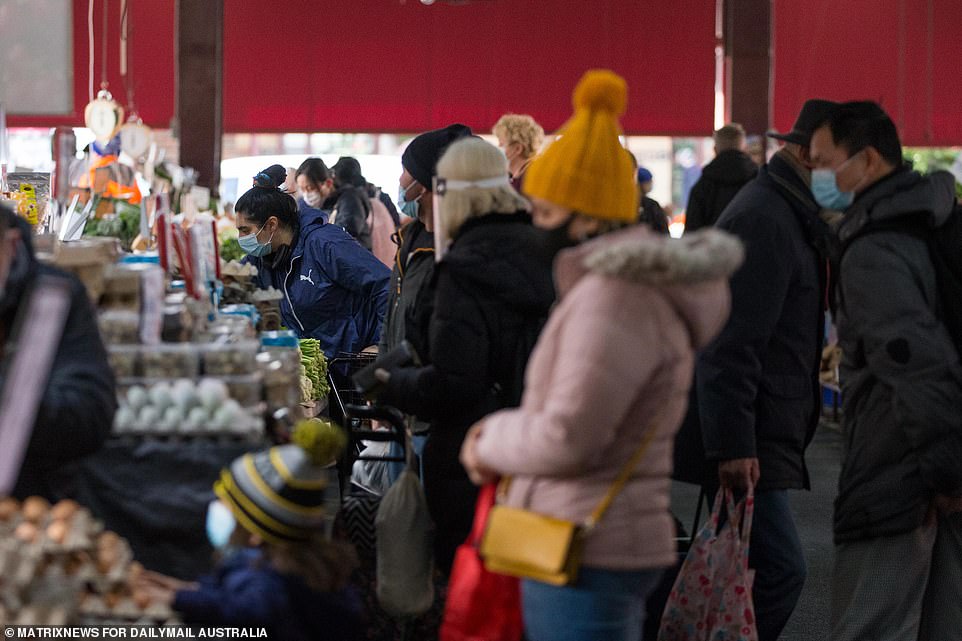 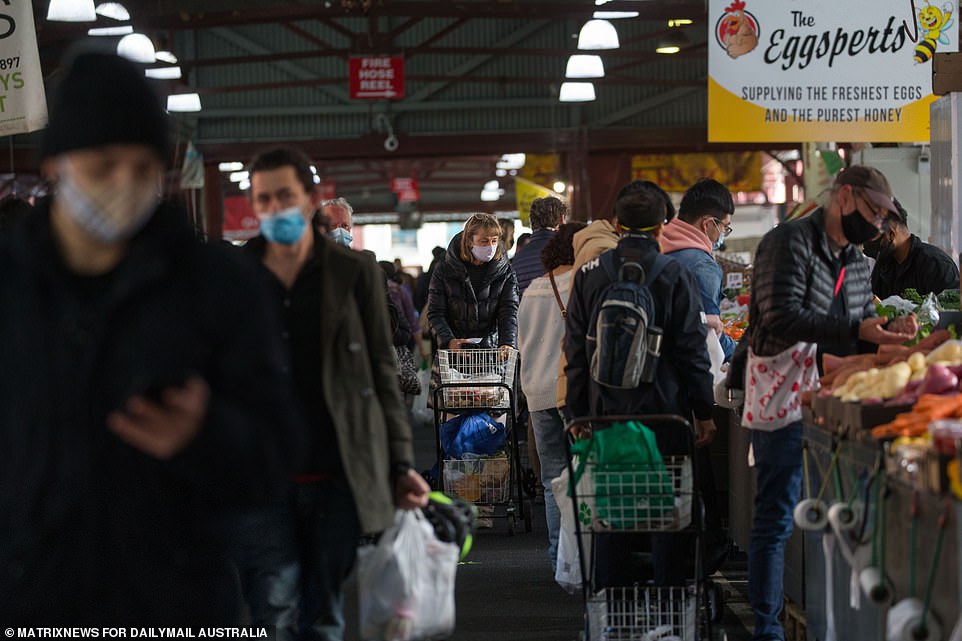 Shoppers gathered at the Queen Victoria Market on Thursday 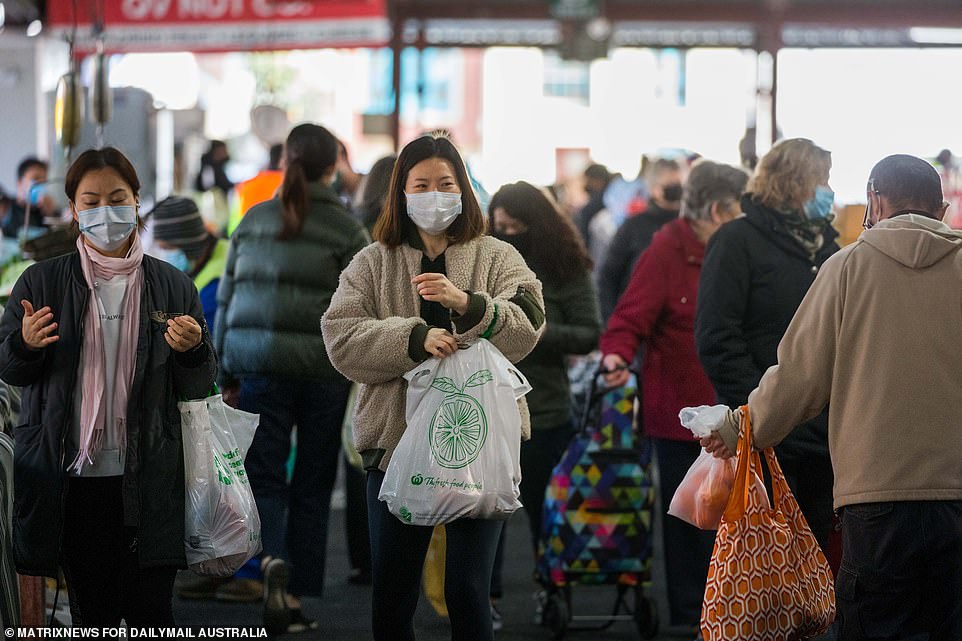 Two men in their 60s, three men and two women in their 80s, and one woman in her 90s are among the deaths.

A total of 7449 active cases remain with 575 Victorians in hospital with the virus – 42 of those in intensive care.

Along the footpath, police and soldiers walked a perimeter of the market without stepping foot inside to question anyone.

Although one market worker told Daily Mail Australia officers had attended the market that morning while it was quieter.

‘They didn’t buy anything,’ she said.

The influx of shoppers will no doubt come as a major concern to Deputy Chief Health Officer Allen Cheng, who said on Thursday he hoped to see a decrease in current COVID numbers over the next 10 days.

The new lockdown conditions have forced the closure of companies in the entertainment, retail, travel and other sectors and is expected to put 250,000 people out of work.

Employees allowed to work on-site now have to show a permit or official work ID if they are by stopped police to prove they can leave their homes, or face fines of up to $99,123 for businesses and up to $19,826 for individuals.

On Thursday, police hit the streets of Melbourne to enforce the law.

Police sources have told Daily Mail Australia it is a daunting task for rank and file officers, who are effectively tasked with questioning anyone they remotely suspect could be breaching the lockdown laws.

Between 8pm and 5am, residents are only allowed to leave their house for work and essential health, care or safety reasons.

Police teams of two were accompanied by four soldiers in full camouflage gear as they patrolled the streets of Melbourne.

They were seen stopping everyone from construction workers to homeless people they found sleeping on the streets.

Citizens who claimed to be workers were asked to produce proof that they were essential workers with specific signed documents they received from their employer. 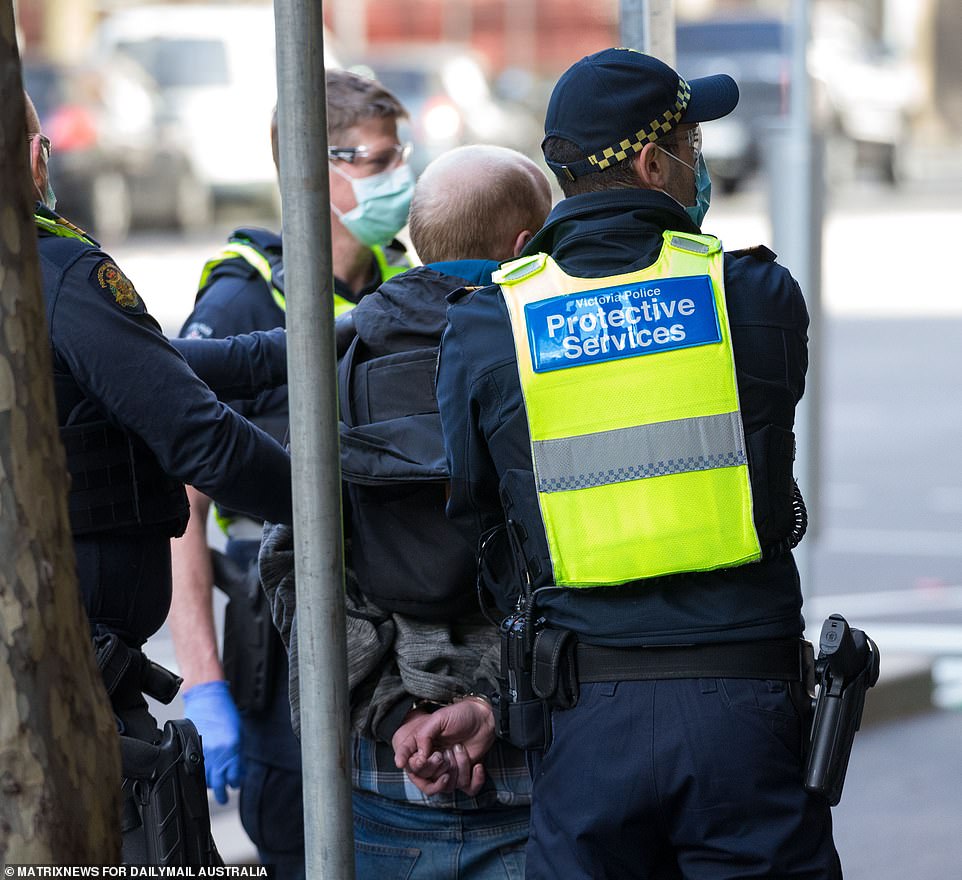 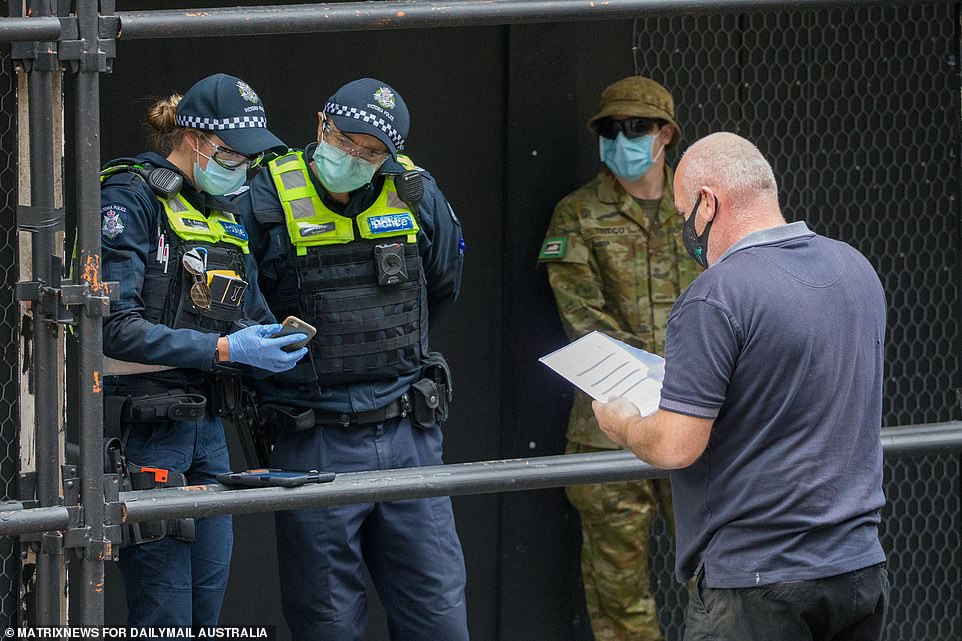 Police, accompanied by soldiers, question a worker on the streets of Melbourne on Thursday 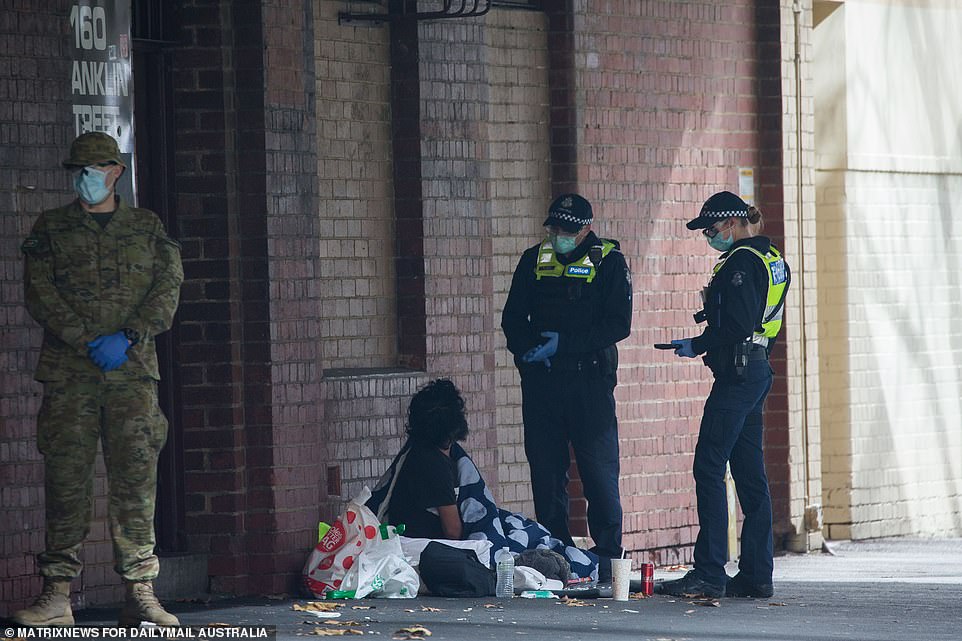 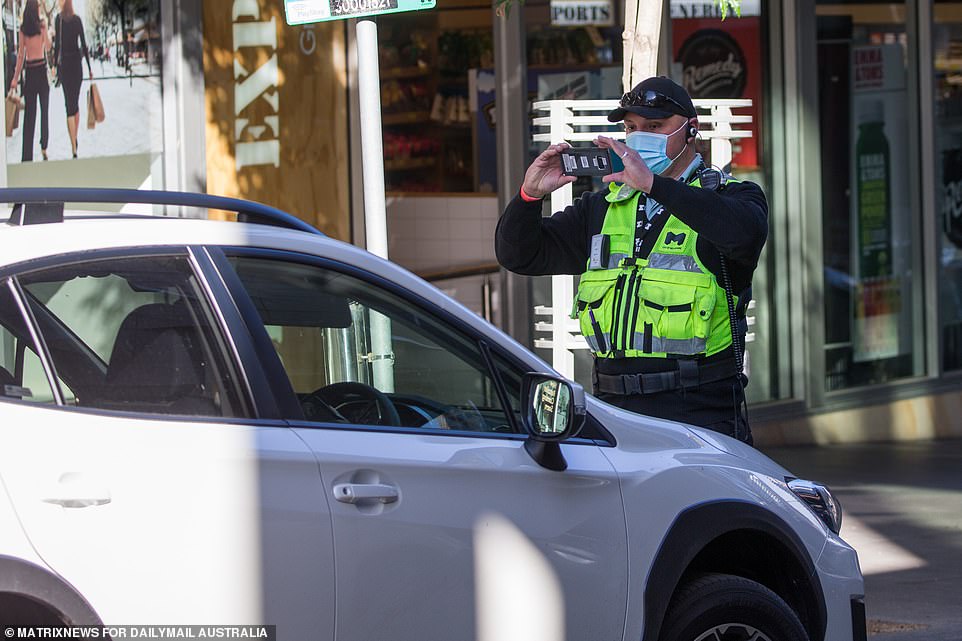 Essential workers had struggled to obtain the documents amid the state government website collapsing and slow workplace action to sign and return the now essential documents.

While many of those who failed to produce the document on Thursday left with a warning, they are not expected to get lucky twice.

Police have been told to produce lists of those that have been approached and by the close of the week will likely include a list of those they have fined.

Daily Mail Australia staff were among those questioned and asked to produce the essential workers document on Thursday.

The police action coincided with the release of footage showing a dramatic takedown of a mum for breaking lockdown restrictions in Hoppers Crossing, west of Melbourne.

Confronting video, filmed by her daughter, showed the blonde woman screaming as the officers held her face-down on the footpath and handcuffed her arms behind her back.

It was claimed they had been standing ‘with a poster about Russian politics’ when she was pinned down, before both women were issued a $1,652 fine each for breaching coronavirus restrictions.

Victoria Police Chief Commissioner Shane Patton issued a warning to anyone refusing to follow the rules.

‘If you’re not doing the right thing, we will not hesitate to issue infringements, to arrest you, to detain you where it’s appropriate.’

Back on the streets of Melbourne, police and soldiers were joined by Melbourne City Council parking inspectors who continued to issue fines to the essential workers – mostly construction workers – forced to now park on the road. 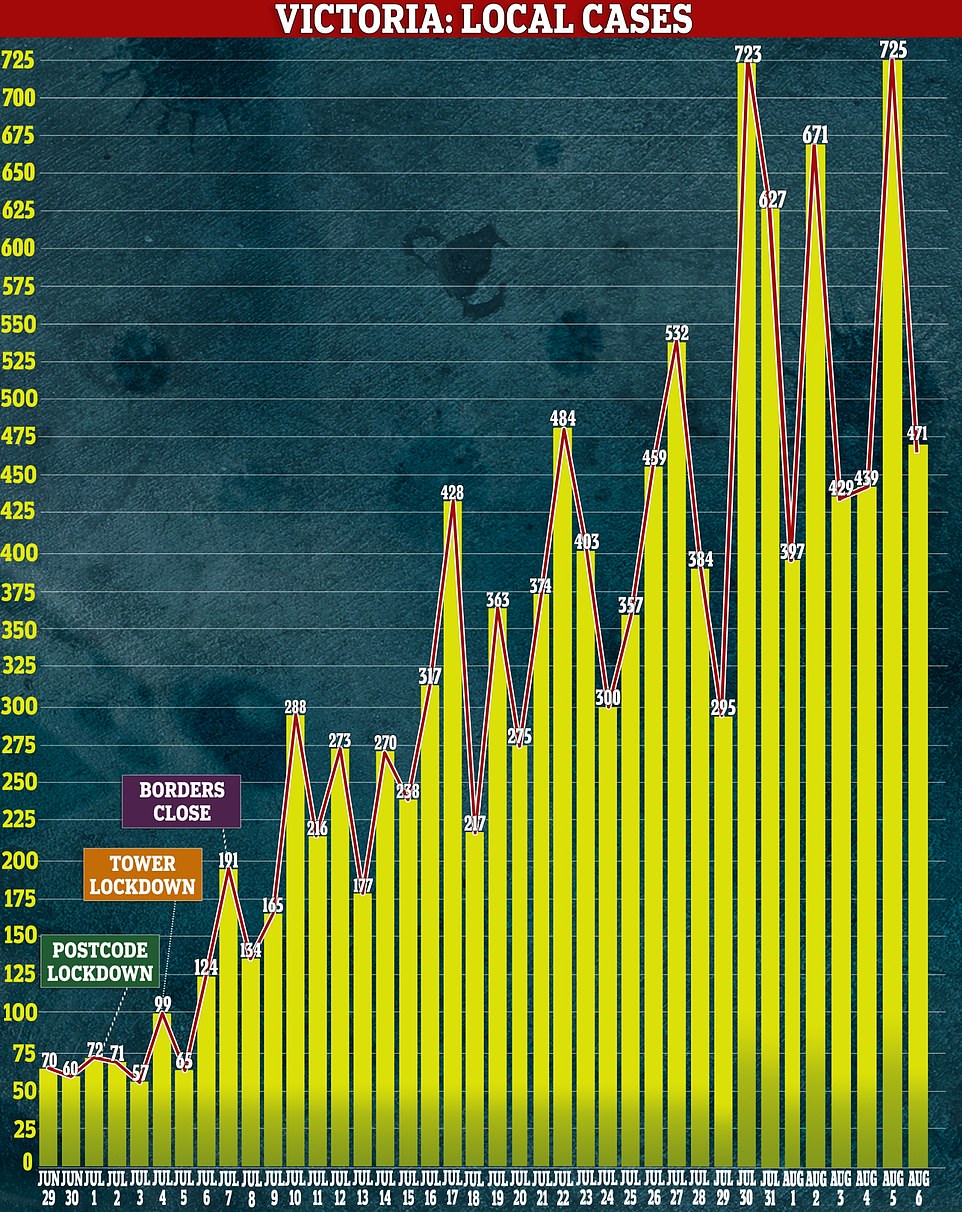 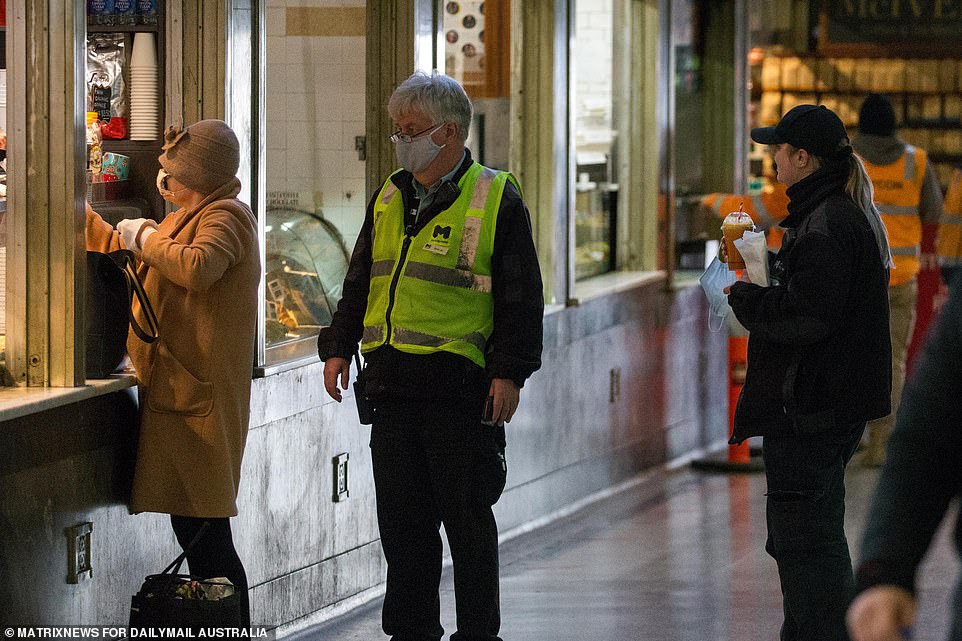 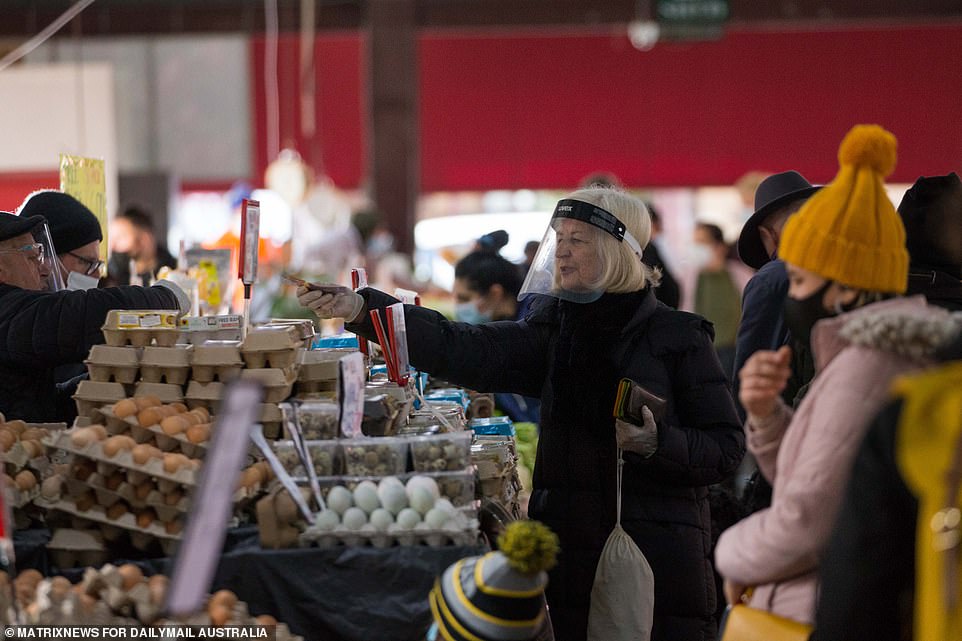 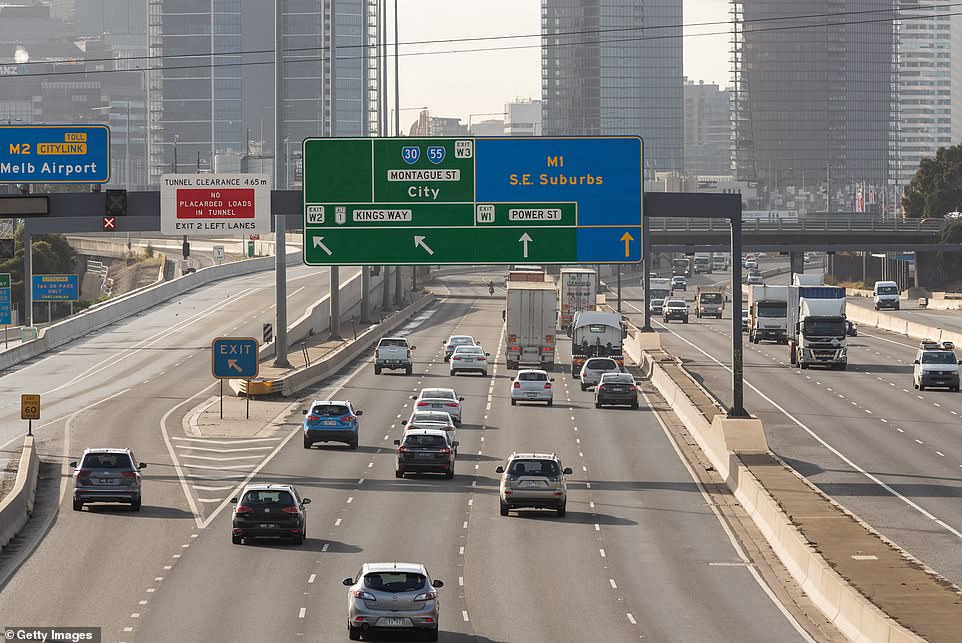 Many workers have slammed the parking fines as cruel penny pinching as private carparks across the city have all had to close their doors under the latest lockdown restrictions.

Hardly a shop remains open except for a few cafes that continue to feed the teams of flouro-wearing workers.

Melbourne’s arterial roads remain a dream to drive on for those still forced to commute across town to perform essential duties.

Melbourne’s stage four shutdown is expected to strip as much as $9 billion from the national economy over the three months to September.

Of that, $6-7 billion would be lost in Victoria.