Hundreds of Christians calling for the removal of the sculpture, entitled "McJesus," demonstrated at the museum in the northern city of Haifa last week. Israeli police say rioters hurled a firebomb at the museum and threw stones that wounded three police officers. Authorities dispersed the crowds with tear gas and stun grenades. 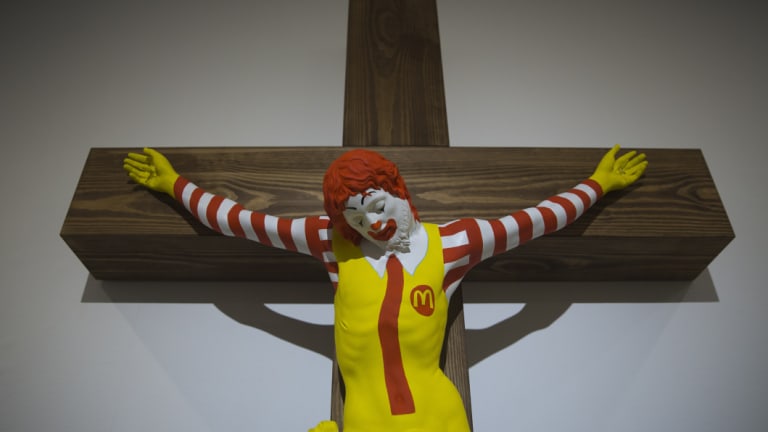 An artwork called “McJesus,” which was sculpted by Finnish artist Jani Leinonen and depicts a crucified Ronald McDonald, is seen on display as part of the Haifa museum’s “Sacred Goods” exhibit.Credit:AP

Church representatives brought their grievances to the district court on Monday, demanding it order the removal of the exhibit's most offensive items, including Barbie doll renditions of a bloodied Jesus and the Virgin Mary.

Museum director Nissim Tal said that he was shocked at the sudden uproar, especially because the exhibit – intended to criticise what many view as society's cult-like worship of capitalism – had been on display for months. It has also been shown in other countries without incident.

The protests appear to have been sparked by visitors sharing photos of the exhibit on social media.

Christians make up a tiny percentage of Israel's Arab minority and say they face unique challenges. 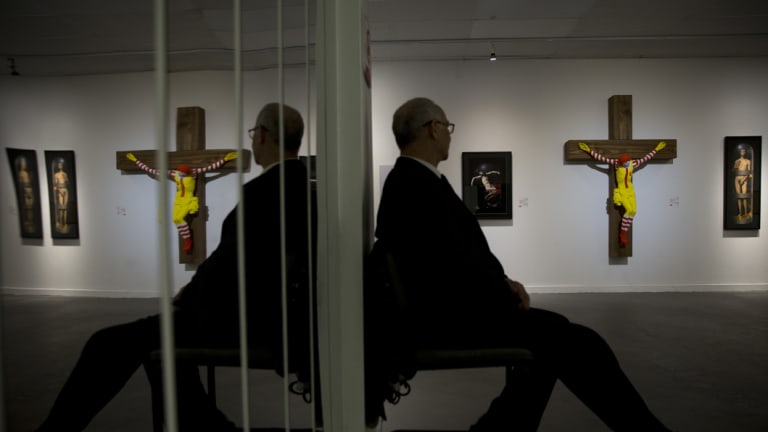 An artwork called “McJesus” has sparked an intense backlash in Israel.Credit:AP

"We need to understand that freedom of expression is interpreted in different ways in different societies," said Wadie Abu Nassar, an adviser to church leaders. "If this work was directed against non-Christians, the world would be turned upside down."

Israeli Culture Minister Miri Regev, who has been accused of censorship for pushing legislation mandating national "loyalty" in art, also called for the removal of the "disrespectful" artwork.

The museum has refused to remove the artwork, saying that doing so would infringe on freedom of expression. But following the protests it hung a curtain over the entrance to the exhibit and posted a sign saying the art was not intended to offend.

"This is the maximum that we can do," Tal said. "If we take the art down, the next day we'll have politicians demanding we take other things down and we'll end up only with colourful pictures of flowers in the museum."

But that did little to placate those who want the artwork removed.

A protester remained camped out in a tent at the museum on Monday with a sign reading "Respect religions." Police watched closely as local Christians complained to reporters in front of street signs spray-painted with crosses and windows still shattered from last week's clashes.

"This is very offensive and I cannot consider this art," Haifa artist and devout Christian Amir Ballan said. "We will continue through peaceful rallies and candle vigils… We won't be quiet until we reach a solution."

Jani Leinonen, the Finnish artist behind "McJesus," has also asked that it be taken down – but for a different reason.

He says he supports Boycott, Divestment, Sanctions, or BDS, a Palestinian-led movement aimed at pressuring Israel to change its policies toward the Palestinians. The group has made significant gains in recent years, persuading a number of foreign artists to cancel performances in Israel.

"We will be defending freedom of speech, freedom of art, and freedom of culture, and will not take it down," he said.