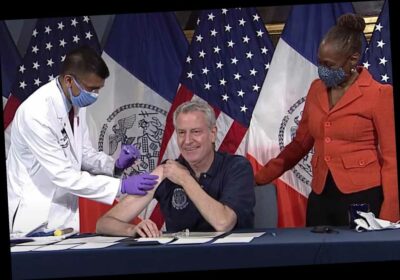 Cuomo gets the COVID-19 vaccine at Harlem Church

Hizzoner, wearing a blue polo shirt with the official Big Apple seal on it, received an injection of the single-dose Johnson & Johnson vaccine from city Health Department Commissioner Dr. Dave Chokshi as First Lady Chirlane McCray stood by his side.

“OK, doctor, you have to tell me when you’re giving the shot though,” a grinning de Blasio quipped after Chokshi gave de Blasio the jab in his left arm.

A freshly vaccinated de Blasio then said, “I am like amazed. I could barely feel it. I am not joking here — well done.”

“That was easy,” de Blasio added. “I can now attest personally.”

De Blasio continued, “I have total faith in the Johnson & Johnson vaccine. That’s why it’s now in my arm.”

De Blasio got his shot one day after his scandal-scarred rival Gov. Andrew Cuomo got the same vaccine at a church in Harlem – but he said Wednesday that that had nothing to do with the timing.

The 59-year-old mayor became eligible to get inoculated after the state opened shots up to “public facing” government employees Wednesday.

More than 3 million vaccine doses have been administered in New York City since inoculation efforts began in mid-December.

“I am officially joining the 3 million now,” de Blasio said.