MAX HASTINGS reveals hidden side to the story of the Dambusters A deluge of death and devastation: Their heroism is not in doubt, but as a landmark new book by MAX HASTINGS reveals, there was a hidden side to the story of the Dambusters

It’s a gripping new account of one of the defining operations of World War II. In yesterday’s Mail, Max Hastings recounted the nerve-shredding story of the legendary 1943 Dambusters Raid.

Here, in a powerful retelling of the tragic aftermath, Britain’s top historian asks the crucial question: Was it really worth it?

I have been moved to retell the Chastise story in hopes of offering a new perspective which almost represents a paradox.

I retain the awe of my childhood for the fliers who breached the Möhne and Eder. In my 70s, I muse constantly upon the privilege of having attained old age, whereas the lives of most of those fliers became forfeit before they knew maturity, fatherhood or, in many cases, love or even sex.

Yet in the 21st century it also seems essential to confront — as many past British writers have been reluctant to confront — the enormity of the horror that the unthinking fliers brought down on a host of innocents.

The breaching of the Möhne dam unleashed upon the valley below a hundred million tons from the reservoir, led by a tidal wave sometimes 40ft high, which swept down the Sauerland with primeval force, bearing death and devastation at a speed of six yards a second, creating floods that eventually extended a hundred miles. 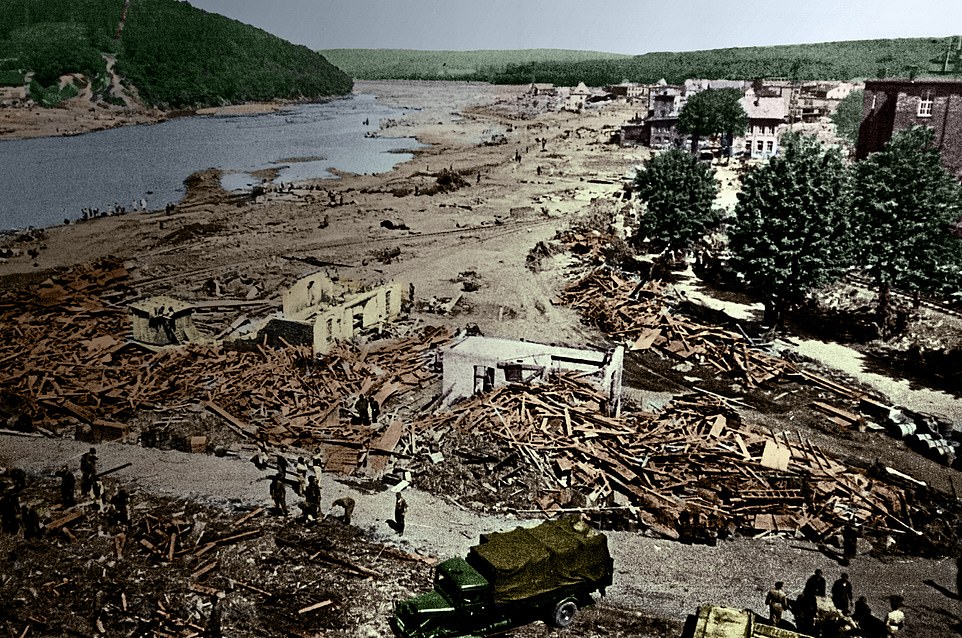 A hundred million tonnes of water was unleashed on the valley below the Möhne dam in n May 1943 however around 800 of those killed were not Hitler’s followers but young women from Poland, Ukraine and the Soviet Union, being kept as slaves by the Nazis. Pictured is devastation in the Möhne Valley after the raid by the RAF’s 617 Squadron in 1943

When the Lancasters of 617 Squadron first approached the midnight darkness nearby, air-raid sirens wailed across the region, causing many families to take refuge in their cellars. They feared bombs, blast, flame, not water in inconceivable volume. That the dam might be breached was beyond comprehension.

Hearing ‘a swooshing and a rolling, like the sound of trains’, householder Willy Kaufmann experienced an electrifying instant of understanding: ‘That is the Möhne reservoir approaching.’

Within seconds, a 13th-century church at the village of Himmelpforten vanished beneath foaming water. Its tower remained visible for a further few moments, then collapsed beneath the flood, its bells delivering a final peal, abruptly stifled.

The priest probably drowned in the cellar where he had taken refuge from a feared rain of bombs, though some accounts suggest that it was he who tolled the bells for the last time. The village itself ceased to exist: even the rubble of its ruins was borne hundreds of yards down the valley.

On and on westwards surged the waters, bearing on their billow fallen timber, flotsam and wreckage. In Günne, three hydro-electric plants vanished, taking with them the bodies of 30 workers, later recovered miles downstream. 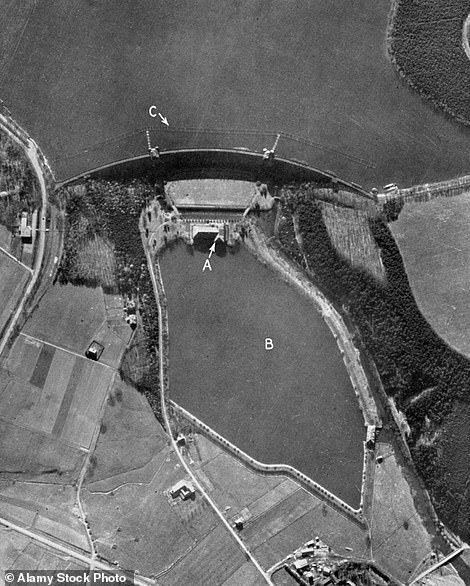 When the Lancasters of 617 Squadron first approached many families took refuge in their cellars and drowned. Pictured is an aerial reconnaissance photo of the dam before the attacks

Callers who raised the alarm were rebuffed by police sceptical that the dam could possibly be broken. Hundreds of local people lingered in their shelters fearing bombs instead of dashing for the safety of higher ground, then perished.

Water swirled 24ft deep around houses, forcing their occupants to tear away the tiles and clamber onto their roofs. Hundreds of houses collapsed. One mother saw a timbered building floating by, in which a candle still flickered behind a window.

The tidal wave overturned a coal train, tearing up tracks and sweeping away the rail embankment.

In the little town of Vosswinkel, inhabitants were first alerted by the pounding hooves of a stampeding cluster of horses which galloped up its main street ahead of the flood. From their attic, one family watched in horror as the home of their neighbours, a couple with five children, suddenly vanished, together with its occupants.

That night 617 Squadron killed by inundation around 1,400 to 1,500 civilians, more than had any earlier RAF raid on Nazi Germany (though, to be fair, the casualties inflicted by Chastise were soon surpassed when a fortnight later a Bomber Command attack on the Ruhr killed 3,500 civilians).

A parish priest described how his church, which stood safely above the flood, was designated as a mortuary. It soon held some 200 bodies: ‘Men, women and children, from infant to greybeard, were laid out … some with clenched hands and faces distorted with fear.’

Yet the heaviest human forfeit for the Möhnekatastrophe (as the Germans still call it) was paid by people — almost all of them young women — who were not Hitler’s followers, nor even his citizens, but instead his slaves.

Mostly aged between 16 and 20, they had been brought in from Poland, Ukraine and the Soviet Union to toil in the Third Reich’s factories. Held in camps in conditions of chronic privation, they worked for as many hours as they could stand.

They were confined by night to huts in barbed-wired compounds, atrociously fed, then dispatched at daybreak to labour in factories making torpedo fuses and the like, or as domestic servants in German homes. 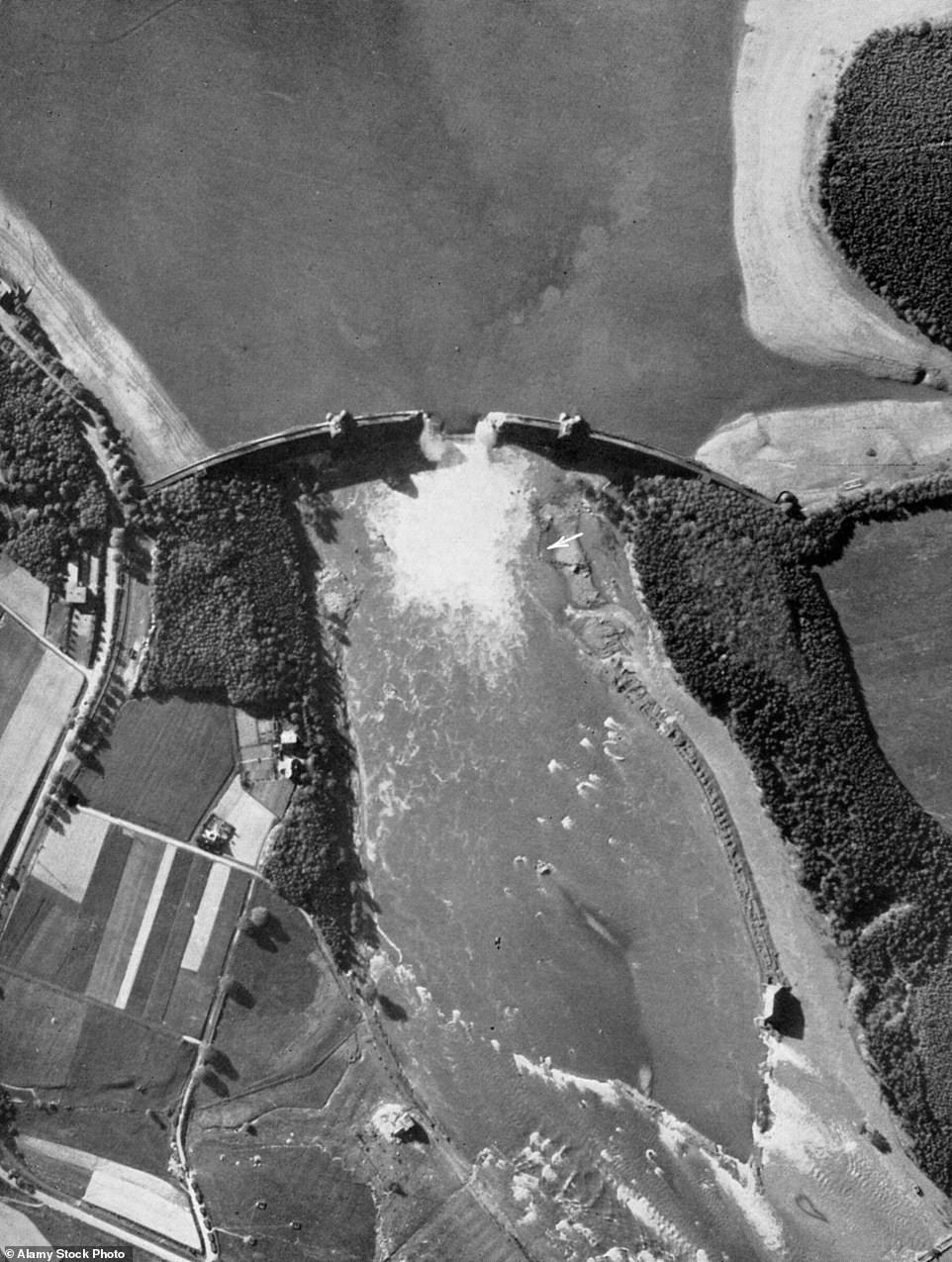 For the women being held in camps they were trapped behind barbed wire and had no hope of escaping the water. Some Ukrainian women who survived were found clinging to trees, stark naked and bleeding. Pictured is the dam after the bombs

One woman worker wrote: ‘We were fed turnip soup every day and a kilogram of bread a week. That was all. We were permanently half-starved, subsisting on waste from German kitchens.’

Most employers regarded them with less sentiment than they accorded to their beasts of burden. Fraternisation was strictly forbidden; sexual relations were punished, even when coercion could be proved.

On the night the Mohne was breached, a local boy remembered ‘terrible cries’ and ‘death screams’ from a barracks near the town of Neheim where over a thousand Eastern labourers were lodged. A steep hill channelled the rushing water towards their compounds.

Trapped behind barbed wire, most inmates had no hope of escaping the doom which struck them with the roar of an express train. The boy saw foreign workers sweeping by, clinging to the broken timbers of their barracks until these smashed with crushing force into the wall of an office building. ‘The screams died.’

An intact hut sailed past on the torrent before striking a bridge with a force that killed or drowned the occupants.

One Ukrainian woman who managed to escape remembered the water rising to her chest before she got out. In those awful moments, people survived who kept their footing to struggle to higher ground, while all those who slipped and fell perished.

‘On the mountain behind the river Möhne we stayed until morning, drenched, half-naked, freezing. Then we were led to the house of a farmer, who gave each of us a piece of bread and a mug of milk. Afterwards, we were sent back to work again.’

Daybreak revealed the corpses of hundreds of Russian and Polish women, strewn amid their pathetic possessions.

Some Ukrainian women who survived were found clinging to trees, stark naked and bleeding, the clothes torn from their backs in the violent passage downstream. The toll of foreigners who died totalled at least 800, though to this day nobody knows the exact number.

Many bodies were simply designated Unbekannter Russe? — ‘Unknown Russian?’ One mass grave, later decorated with Polish colours, was marked merely as the resting place of 479 unnamed Poles and Russians.

In a vivid reflection of the mentality of the Nazi officials conducting the later recovery effort, their report records with dismay the damage and German loss of life, but refers to the dead slave labourers only to note that the construction of the camp in which they had been housed, now destroyed, had cost a million marks. 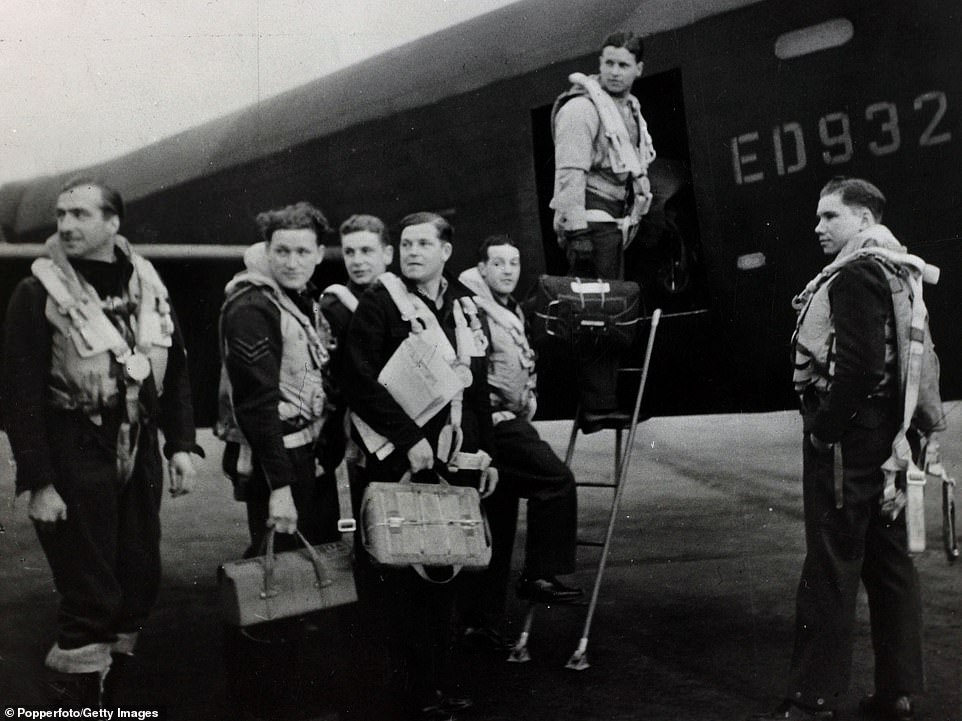 An official police report estimated losses at 6,000 cattle and 625 pigs; over a thousand houses wrecked; 4,000 hectares of agricultural land flooded and uncultivable; almost a hundred factories seriously damaged; 46 road and rail bridges wrecked or damaged and 33 clusters of beehives destroyed. It put the death toll at between 1,294 and 1,579.

The destruction caused was relatively small. The citizens of every nation engaged in World War II, notably including Britain, had already suffered terribly from air attack. The inhabitants of Churchill’s cities had become well used to dragging corpses, many of them those of women and children, from wreckage contrived by the Luftwaffe.

The people of Russia were daily suffering losses that by 1945 dwarfed those of every other belligerent. But those who endured the 1943 Möhnekatastrophe viewed their own plight as a monstrous injustice thrust upon the innocent.

The counter-argument is that the horrors that befell those in the path of the floods were consequences of the total war Germany had unleashed. The bitter fruits of Chastise represented a portion of the price Germans paid for Hitler. 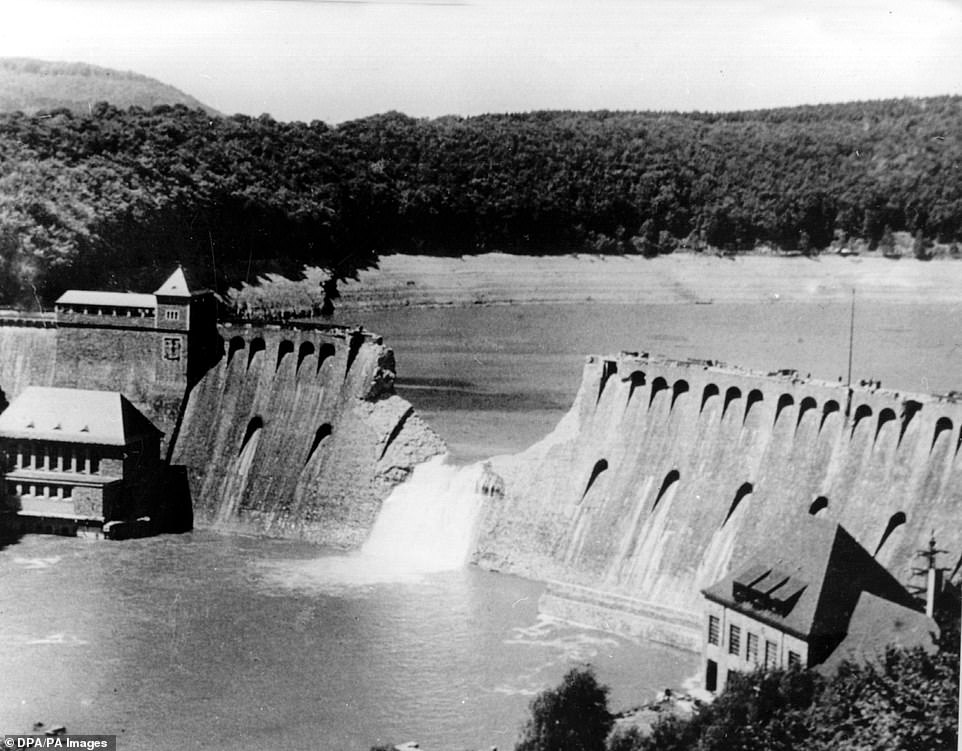 A wartime photograph showing the damage inflicted by the ‘Dambusters’ raid on the Eder dam. The RAF’s 617 Squadron used bouncing bombs to breach two dams within Germany during a night attack in May 1943

Albert Speer, Hitler’s armaments supremo, was initially shocked by the havoc wreaked by ‘a mere 19 bombers’ but within days recovered his nerve and performed one of his accustomed feats of management and improvisation, to restore production and start upon repair of the dams.

Just 18 weeks later, the Möhne was once more sealed, in time to catch the autumn rains — though at a cost that has been estimated as equivalent to £6 billion in modern money.

For weeks after the flooding, affected areas reported disruption of production caused by water shortages at shaft mines, coking plants, smelting works, power stations and armament factories. Coal production fell. Workers also had to be diverted from other key projects, such as fortifying Hitler’s Atlantic Wall, to repair the broken dams.

But six weeks after the raid, the Ministry of Economic Warfare in London reported that, though the destruction was serious and would involve a large amount of repair work, ‘the Möhne damage did not touch the main industrial centres’. Decrypts by codebreakers at Bletchley Park showed the emergency was quickly controlled.

Professor Sir Michael Howard dismissed Chastise in his official history of British Grand Strategy as ‘a spectacular feat of skill and courage, but one whose effect on the German war effort was, unfortunately, slight’.

As for Barnes Wallis’s ‘bouncing bomb’, for all its wizardry, it was never used in action again. It proved to be a technological cul-de-sac, costly in lives and unusable in any other circumstances.

There were other gains, however. Millions of Germans were obliged to confront the vulnerability of the Reich and the emptiness of repeated promises about their security made to them by Hitler, Goering, Goebbels.

While the strategic air offensive failed to break the spirit of Hitler’s people, such a night’s work as that of 617 Squadron imposed a trauma which it seems foolish to understate.

Britons, by contrast, were elated when the news broke. That spring of 1943, after nearly four years of austerity, unpalatable food, family separations and spasmodic terrors, the British people were weary.

Chastise lifted their spirits and revived flagging confidence in their own nation’s powers, as had few events since the desert victory at El Alamein six months earlier. The marriage of technological brilliance with human courage and airmanship awed and thrilled them.

As for the aircrew who executed it, whatever the moral ambiguities thrown up by the Dambusters raid, they will continue to deserve the admiration of their descendants.