Maurice Wilson's ascent of Everest that was the height of madness Ascent of Everest that was the height of madness: His plan was to crash land a plane and walk to the top of the world’s highest mountain. The problem? As a new book tells, Maurice Wilson couldn’t fly… let alone climb

For nearly a century, all those hoping to conquer Mount Everest, and to stab their country’s flag into the ice at the top of the world, have faced a delicate balancing act involving fitness, cost, risk, preparation, fear and bravado.

All, that is, bar Maurice Wilson, a salesman from Yorkshire who tackled the highest peak on Earth in 1934 and adopted a rather different approach.

For starters, his master plan – hatched when already 35 years old, with a war-wounded arm and a gammy knee from a parachute jump – was to fly from Purley, South London to Tibet in a light aircraft, crash-landing on the mountain’s upper slopes.

He would then hop out and walk up, alone, carrying 45lb of equipment, including a mirror with which to signal his progress, a diary in which to record his innermost thoughts and a blessing from a Tibetan Lama to keep him safe.

He would certainly need the latter.

For although Maurice had always enjoyed a nice stroll in the Lake District, he had never before used an ice axe, wouldn’t know a crampon if it hit him in the face and, according to his biographer Ed Caesar, author of The Moth And The Mountain, ‘he had hardly climbed anything more challenging than a flight of stairs’.

Oh yes, and he couldn’t fly a plane either. 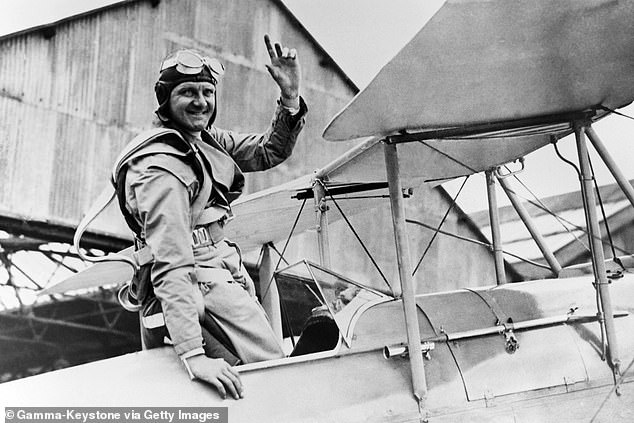 Maurice Wilson, a Bradford-born WWI veteran, set his sights on Earth’s highest peak in 1934, forming a plan to crash land on the upper slopes of Mount Everest and walk to the summit. The only problem? He couldn’t fly or climb [File photo]

But none of that was going to lessen his conviction that he had been put on Earth to conquer Everest and that the health benefits of fasting – one of his all-consuming passions – would power him to the top.

So he bought a three-year-old De Havilland Gipsy Moth from the Scarborough Flying Circus at a knockdown price due to existing damage, repainted her, christened her Ever Wrest, and took lessons.

He was not a natural pilot. It took him twice the normal time to get his licence and he was told very firmly by his instructor that he would never reach his destination.

His mountaineering preparation was, if possible, even more slapdash.

Maurice took no instruction on technique or problems at high altitude, read no specialist books and purchased no expert kit.

Instead he spent five weeks hiking around Snowdonia and the Lake District before setting off.

Even given his extraordinary self-belief, it is hard to understand how he could ever have viewed his mission as anything more than kamikaze.

How could he have believed that he, a stick-thin man from Bradford with no practical experience, would succeed where four official British expeditions – featuring expert Alpinists supported by phalanxes of porters and Sherpas (some carrying crockery and carving knives) – had already failed?

But Maurice did not entertain failure. He referred to his adventure as ‘the show’, welcomed any Press attention, was relentlessly upbeat and refused to consider abandoning his mad undertaking. 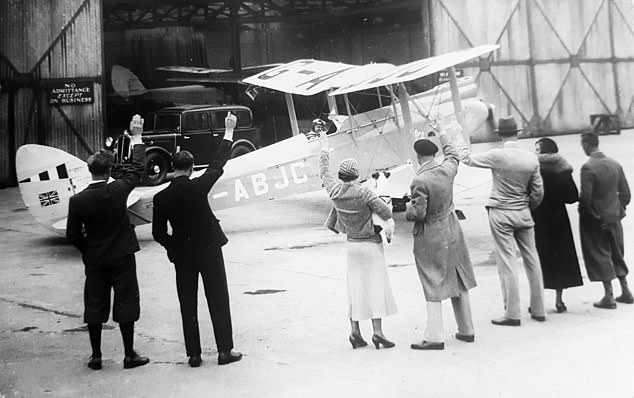 So he didn’t waver when he crashed Ever Wrest into a field near Bradford which delayed his departure by three weeks. Or during his gruelling two-week, 5,000-mile flight when he was arrested in Tunisia, denied a permit to cross Persia, ordered to turn around in Bahrain and had his plane impounded and was forced to disguise himself as an ailing Buddhist monk and walk the 300-odd miles into Tibet.

Still he refused to give up when he found himself broken, weak and freezing to death on the South Col of Mount Everest soon after his 36th birthday.

Born in Bradford, the son of a mill owner, Maurice had been destined for a more settled life until World War I interrupted.

He joined the Army, rose quickly to the rank of captain, fought in the Battle of Passchendaele and won the Military Cross for his ‘conspicuous gallantry and devotion to duty’ during a skirmish near Meteren where, as the only uninjured survivor of his unit, he singlehandedly held a machine gun post against the advancing enemy.

Soon afterwards, he was seriously injured by machine gun fire in northern France and sent home. 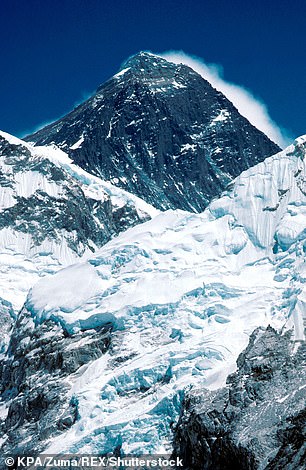 His injuries never fully healed but, despite six applications, he was refused an Army pension and, as a result, was left not just with aches and pains but deeper psychological wounds.

Like so many of the ‘lost generation’ of war veterans, he also suffered terrible restlessness.

Though he did his utmost to satisfy this – by abandoning the family mill, throwing himself into various businesses, marrying twice, countless relationships and a decade travelling in New Zealand, the U.S., Europe and South Africa.

He was ‘chasing a chimera’, was how his mother put it. He certainly tried everything – Eastern meditation, homeopathy, Buddhism and even a complicated love triangle with a childless couple called Len and Enid Evans.

He fell for Enid, described her as the love of his life and later penned passionate letters to her from his sleeping bag in the frozen Alps.

It was in 1932 that everything changed. After many doctors had tried and failed to fix his various ailments, Maurice met a healer in Mayfair who claimed he could cure the incurable with 35 days of intensive prayer and – other than sips of rice water – complete fasting.

According to Maurice, it cured him totally and, from that moment, his belief in the twin powers of prayer and fasting in pursuit of a ‘golden or higher plane of existence’ was absolute and unshakeable.

So much so that, soon after, as he sat in a cafe in Freiburg, southern Germany, reading a newspaper that mentioned the 1924 British Everest expedition he knew it was a sign. 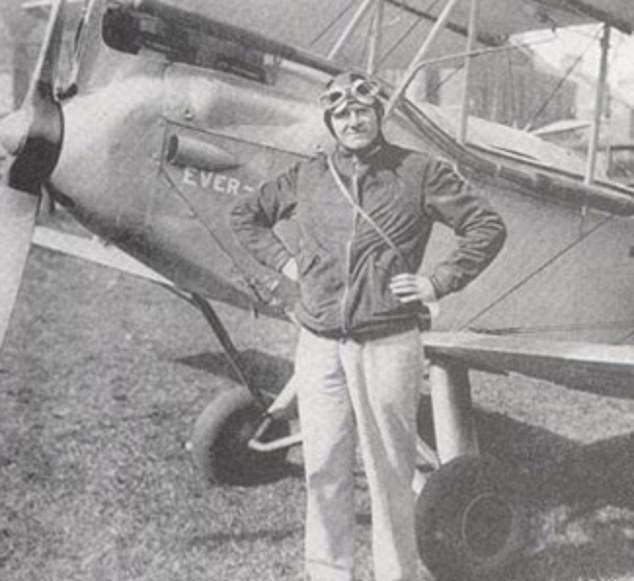 Wilson is pictured with his aeroplane Ever Wrest before his 1934 flight. What drove him to take on such a dangerous mission that he was seemingly so ill suited to is unclear. A new book suggests he suffered from the ‘restlessness’ experienced by many men who returned from WWI [File photo]

He must climb Everest himself and, thanks to a diet of dates, deep breathing and one solid meal a day, would become the first to make it to the top.

His first attempt, which began on April 16, 1934, carrying over 45lb of kit, including a broken altimeter, his lucky ‘flag of friendship’, an ice axe (but no crampons) and a copy of The Voice Of Silence (his Buddhist text), ended in a snow storm almost as soon as it had begun.

‘What damned bad luck!’ he wrote in his diary and promptly took on two local Sherpas, Rinzing and Tewang, who showed him the proper route to the summit.

At Camp III, things perked up when they discovered anchovy paste, King George chocolates and other Fortnum & Mason goodies left by an expedition the previous year, and Maurice promptly abandoned his obsessive fasting.

But soon he was off again in a striking outfit of brocaded blue mantle with gold buttons and a 12ft red silk scarf, forging his way up towards yawning crevasses, ice flows and monstrous cold.

Given his lack of expertise, inexperience and woefully inadequate clothing, he did quite well – though he did start an avalanche and tumbled backwards down 200ft of icy rock, breaking ribs which forced him to recuperate for a few weeks.

Even when his Sherpas abandoned him, he refused to give up, instead striking out alone after penning one last letter to his beloved Enid: ‘Some of us go looking for it and some wait for it to call us up.’

He made it to 22,830ft. His body was found by climbers a year later, lying on a small beach of shale at the bottom of the North Col, a vertical wall of ice, snow and rock – knees drawn up to his chest.

The mantle and scarf were gone, leaving just a mauve jumper, lightweight flannel trousers and thin socks. Kit that was better suited to the golf club than minus 20 degree celsius temperatures.

His rucksack was nearby, containing his precious green leather-bound diary.

His last legible entry, on May 31 and in shakier hand than usual, was classic Maurice: ‘Off again, gorgeous day!’ 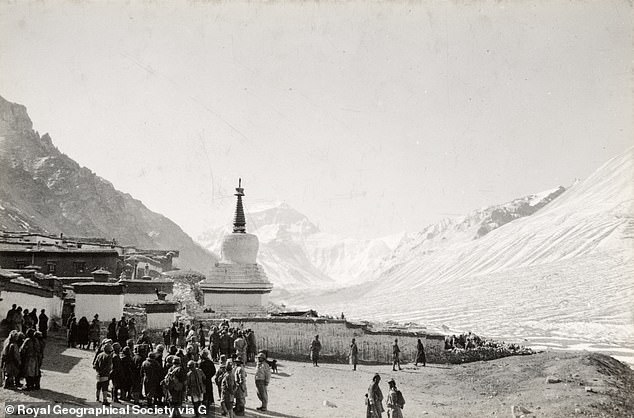 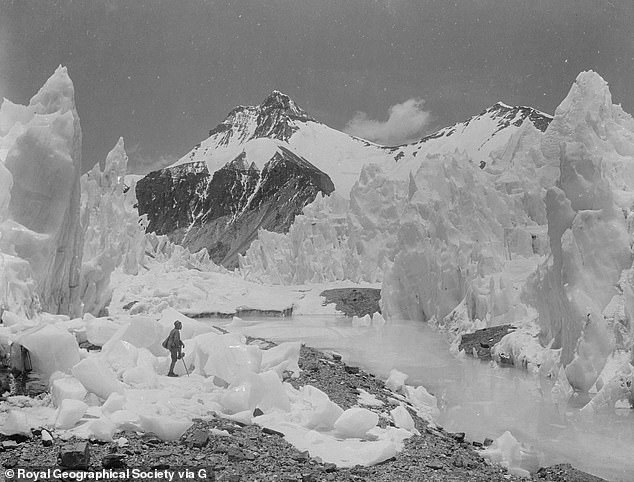 An image from 1922 or 1924 shows ice pinnacles on the East Rongbuk Glacier north of Mount Everest. That Wilson might have been unprepared for such dangerous terrain did not seem to occur to the amateur airman [File photo]

Lord alone knows what propelled him to certain death – madness, mania, love, an embarrassment of failure, or perhaps a mix of all four?

In his book, Ed Caesar believes Maurice was driven in part by the terrible restlessness that afflicted so many veterans of World War I.

‘He had lost the thread of his own story,’ he writes. ‘He yearned for a plot.’

He certainly found one – and one that rolls on. For while his frozen corpse was wrapped in the remains of his ripped tent and buried carefully in a crevasse back in 1935, somehow that wasn’t the end of Maurice.

Because, with astonishing regularity and thanks to the movements of the glacier, every so often his thin, mauve-clad body pops back out of the ice to startle fellow climbers.

The Moth And The Mountain: A True Story of Love, War And Everest, by Ed Caesar, is published by Viking, £18.99.