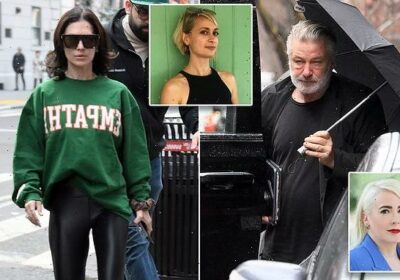 MAUREEN CALLAHAN: Alec’s basking in his own stink-cloud of arrogance. Hilaria is doing her fake Spanish accent again. So how fitting they are finished in the court of public opinion after a young mom’s death

How you say in English . . . Sick and disgusting?

Hey, George Santos, step aside! It’s time that Hilaria Baldwin reminds us all of what a truly unhinged fraud looks and sounds like — and she does it in a fake Spanish accent while wearing high heels, leather pants, statement tops and babies strapped all over herself while her husband faces serious criminal charges and potential prison time.

¡Ay caramba, nothing will stop Hilaria, née Hillary Lynn Hayward-Thomas from Boston, descendant of the Mayflower, from sticking to her years-long lie that she’s actually Spanish. How amazing to watch her castigate the paparazzi outside the Baldwins’ luxury Manhattan apartment building, wearing a green sweatshirt emblazoned with the word ‘EMPATHY,’ waving her hands around to display her perfectly manicured nails, newborn attached in a sling, all in that fake Spanish accent.

‘I want you guys to realize that we have seven kids.’

Um, we know. We got the memo a looong time ago. All you do is display those poor kids on your Instagram account. And frankly, it too often seems like those ‘happy family’ posts exist to torment Halyna Hutchins’s widower — made so by your husband’s tragic mistake — and young son.

Said posts also seem grossly inappropriate, teetering on sexually suggestive: See Hilaria’s endless sexy-mommy-yoga-poses-with-her-latest-bambino — whose neck may or may not be supported, depending on Hilaria’s best camera angle — or Alec’s bizarre post Sunday night, captioning a photo of Hilaria and her toddler son as a kind of leering come-on.

Back to Hilaria’s natural habitat, the roadside presser, where she can briefly slake her constant thirst for media attention while running on fumes of self-righteousness. Check out her oversize movie-star sunglasses, worn on an overcast day. Mamí will not sacrifice glam, no matter how dire the circumstances. 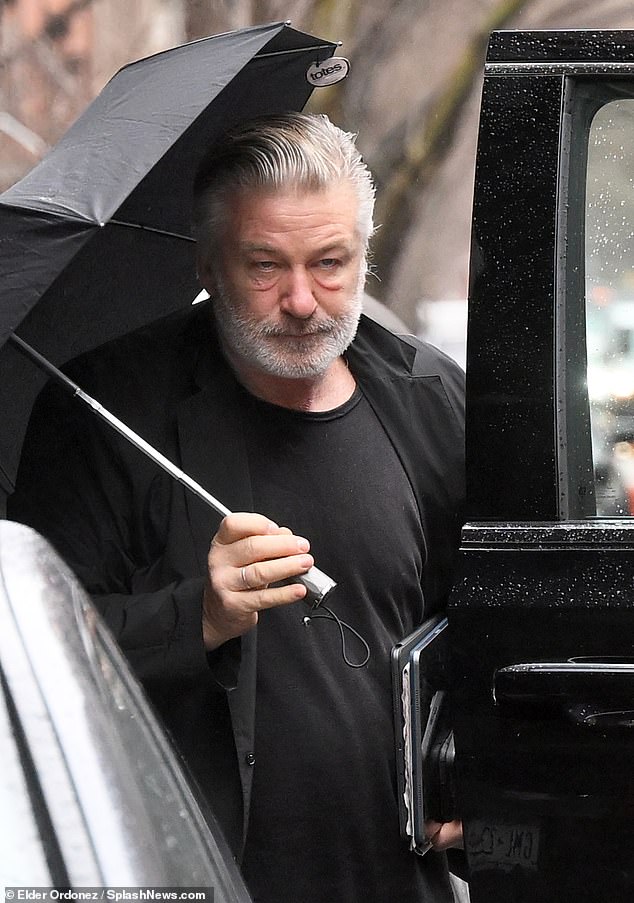 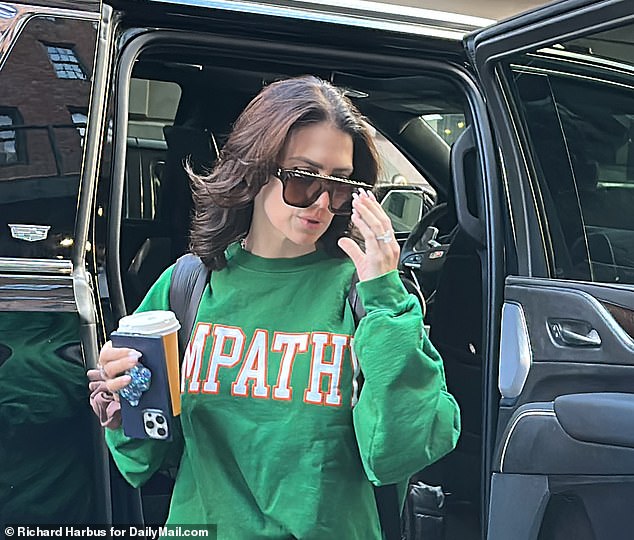 How amazing to watch her castigate the paparazzi outside the Baldwins’ luxury Manhattan apartment building, wearing a green sweatshirt emblazoned with the word ‘EMPATHY,’ waving her hands around to display her perfectly manicured nails, newborn attached in a sling, all in that fake Spanish accent.

‘So on a human level,’ New York’s own Rachel Dolezal continued, ‘you guys know I’m not gonna say anything to you.’

Huh? She’s talking to a pack of reporters to tell them she’s not going to talk to them?

‘So pleees,’ she said, ‘leave my family in peace.’

There are so many questions to ask Hilaria in moments like these, but my number-one-with-a-bullet ask remains: ‘Hilaria, after all this time, for real — what’s with the fake Spanish accent?’

Anyway, that presser turned out to be a mere diversion, allowing Alec — who had just been slapped with involuntary manslaughter charges — to speed away to NYC’s Film Center Building, where he was photographed smiling. Actually, he seemed to be laughing, really enjoying all this attention.

Think about that. This is a man with a history of attacking photographers on the streets of New York. Now that he is undeniably newsworthy for something truly terrible, he seems to love the paps! It’s all so ghastly and twisted.

And Alec trusts no one more than Hilaria to be his ambassador. Over the past three days we’ve been treated to her pap walks — I mean, someone in that $16 million dollar apartment, staffed with nannies and God knows how many assistants, has to go out and get the coffee, am I right? — wearing $300 slippers and another sweatshirt reading ‘HUMAN’ and on Monday, a hot pink hoodie reading ‘BOUNDARIES ARE HOT.’

Know what else is hot? A criminal justice system unbowed by celebrity.

No matter how this trial plays out, Alec and Hilaria Baldwin are already suffering. They have done themselves deep, irreparable reputational damage, treating the accidental death of a young wife and mother, at Alec’s hands, as some kind of tabloid joke.

In the days after Hutchins’s death, Hilaria posted this: ‘Parenting through this has been an intense experience, to say the least.’

Alec and Hilaria haven’t begun to experience intense. Intense will be that criminal trial in New Mexico. Intense is the very real possibility of going to prison. Intense is trying to sell off all their most valuable real estate — they just price-chopped their beloved house in Amagansett by $4.1 million and are quietly shopping their NYC pad — and moving to Vermont, which isn’t really a hotbed of paparazzi.

Intense will be losing much of Alec’s fortune to legal fees. 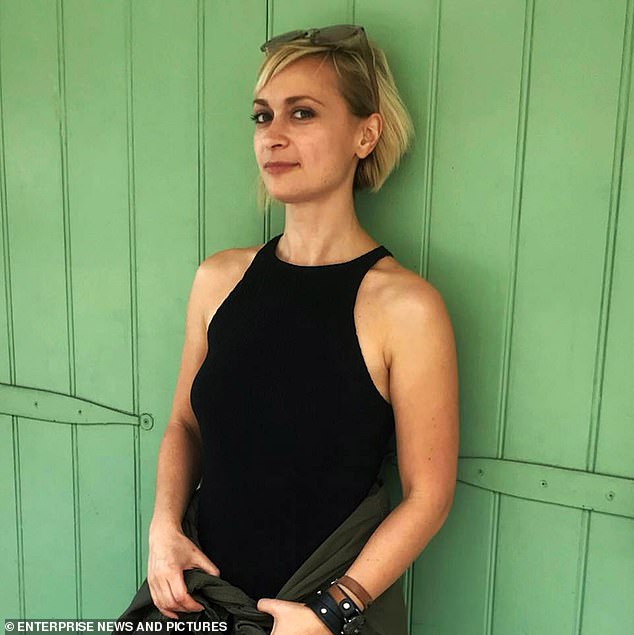 Halyna’s (above) son — because it can never be noted enough — was so traumatized by her death that he couldn’t speak for two days. 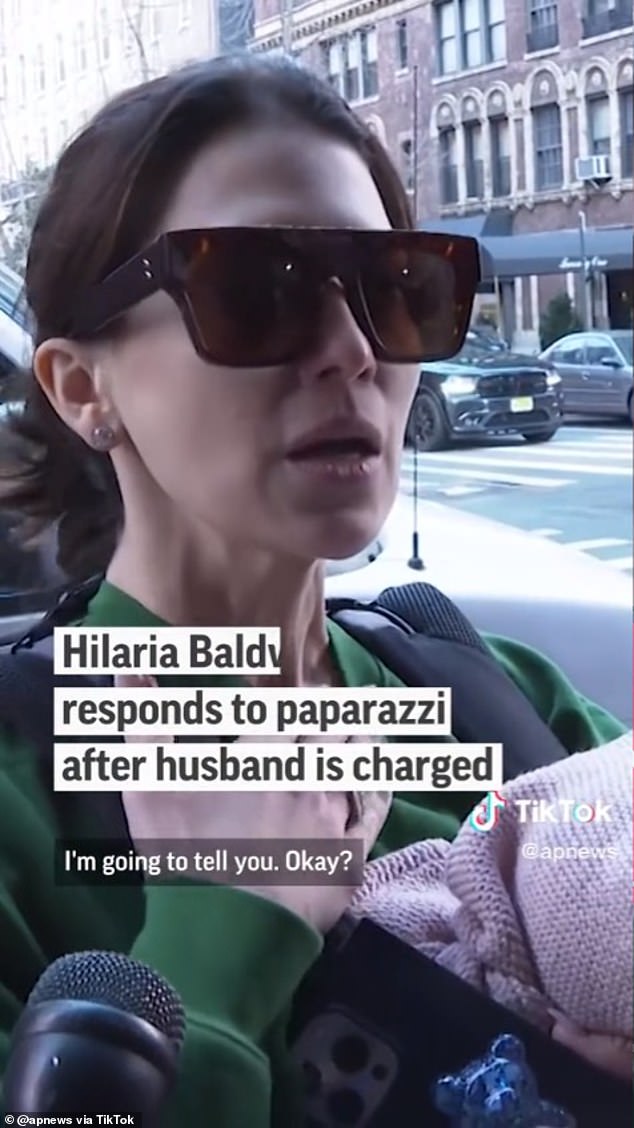 ¡Ay caramba, nothing will stop Hilaria, née Hillary Lynn Hayward-Thomas from Boston, descendant of the Mayflower, from sticking to her years-long lie that she’s actually Spanish.

Alec and Hilaria are so convinced that they are the real victims here, and if that they just tell their version of events enough times — see Alec’s appalling sit down with George Stephanopoulos, in which he claimed Hutchins’s death was someone’s fault, but definitely not his, and actually, come to think of it, Halyna told him to point the gun at her, so really her death was probably her own fault — we’ll all come around and feel sorry for them.

As two leading Hollywood firearms experts have told me, on the record and more than once: Guns don’t just go off by themselves. The first rule of gun safety, on a movie set or anywhere, is: Never point a gun, whether you believe it to be loaded or not, at something or someone you do not intend to kill.

Alec Baldwin has never been a sympathetic figure, but he sure had public sympathy in the immediate aftermath of that shooting.

And then he and Hilaria, true to who they are, squandered it all. Whether he’s convicted or not, who would ever hire Alec Baldwin again? Aside from whether he could ever be insurable, who wants his stink-cloud of arrogance, his sheer lack of repentance or sympathy for what Halyna Hutchins’s son and husband are going through, anywhere near them?

Her son — because it can never be noted enough — was so traumatized by Halyna’s death that he couldn’t speak for two days.

Yet here was Alec, in texts to Hutchins’s widower Matthew, callously dismissing his questions and concerns.

After Matthew reached out to Baldwin via text on December 1, 2021, less than two months after the shooting, Baldwin replied curtly: 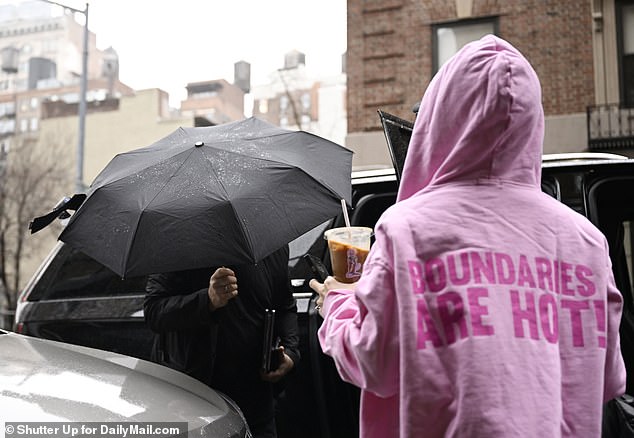 Over the past three days we’ve been treated to Hilaria’s pap walks wearing $300 slippers and another sweatshirt reading ‘HUMAN’ and on Monday, a hot pink hoodie reading ‘BOUNDARIES ARE HOT.’

Are you kidding me? Know who will never be with her kid again?

And remember: Baldwin put on quite a show right after Hutchins died, sure to be photographed with Matthew and his young son, telling his Hamptons pal George Stephanopoulos that Matthew ‘hugged me and he said, ‘I suppose you and I are going to go through this together.’ And I thought, ‘Well, not as much as you are.’

In that regard, Alec was telling the truth. He was happy to let Matthew go through this without him.

So, Hillary: Wear all the expensive sloganeering outerwear you can afford and let loose with your complex de español — para ahora. Because whether or not a jury finds Alec Baldwin guilty, in the court of public opinion, you’re both done.