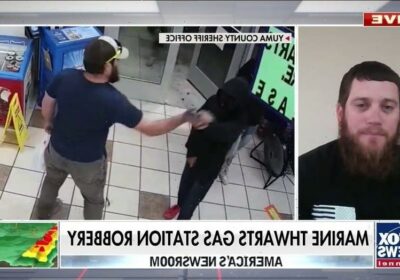 Marine veteran James Kilcer took matters into his own hands when he witnessed a robbery attempt at an Arizona gas station.

A U.S. Marine Corps veteran who stopped an attempted robbery at an Arizona convenience store this week in a dramatic encounter caught on video told Fox News on Friday how his act of heroism went down.

James Kelcer told “America’s Newsroom” he takes his personal safety, and the safety of others, “very seriously.”

“I turn around to go and leave, kind of walk out and as I’m turning around I hear the door kind of open real aggressively,” Kelcer said about the incident Wednesday. “At that point, the ‘spidey senses’ tingled a little bit.”

Three unidentified people entered the store with one armed frontman leading the way.

“I saw two other guys with no other weapons and decided that’s the guy that I’m going to hit,” Kelcer says.

In one motion, Kelcer grabbed the gun and without hesitation hit the other suspects with a bag of his store purchases, which he said included two Gatorades, two energy drinks and “a snack.” 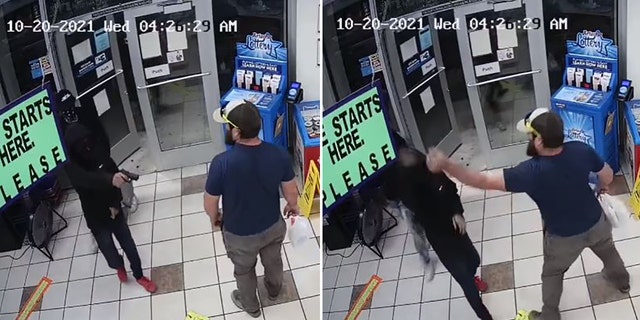 “I was actually going to take control of his head and the gun at the same time, and the bag just happened to be heavy and attached to me and it smashed him right in the face,” Kelcer said.

While the gas station clerk was “a little worked up” about the incident, according to Kelcer, he jumped over the counter to chase the suspects.

Kelcer credited his Marine Corps training’s muscle memory of knowing what to do in such incidents in addition to being “mentally prepared” when the attempted robbery occurred.

The armed juvenile suspect was arrested and taken into the Yuma County Juvenile Justice Center on one count each of armed robbery and aggravated assault. The search continued for the two other suspects who escaped.