MANCHESTER will be now be FORCED into a Tier 3 lockdown after talks between Boris Johnson and Andy Burnham collapsed.

The Northern Mayor has been accused of wrecking the £60million talks with his "pride" and slammed for not grappling with the "gravity" of the situation. 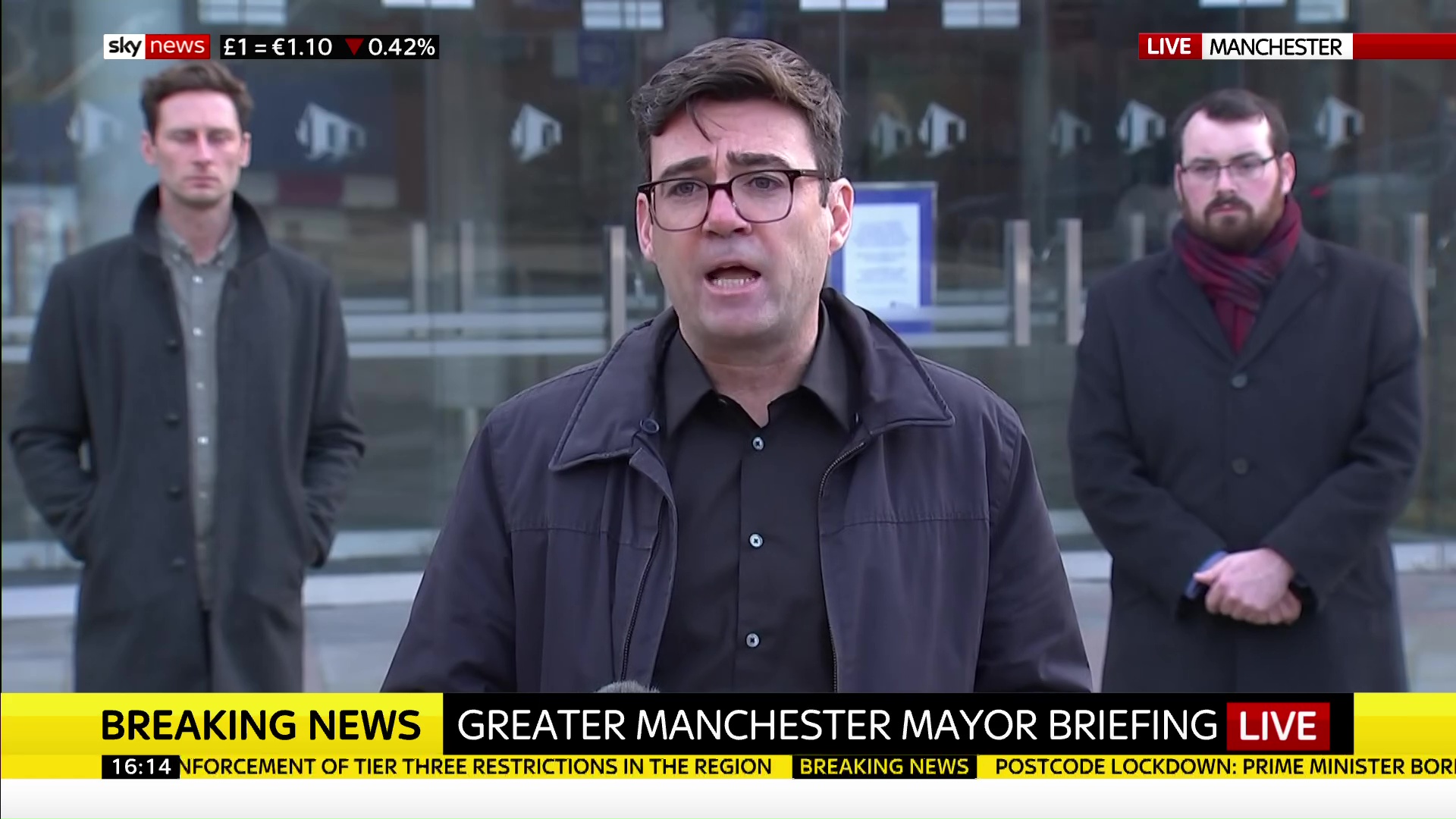 Manchester Council leaders demanded £75m in extra cash help as they ramped up the rhetoric against No10's efforts to force them into lockdown.

One Whitehall insider told The Sun: “We offered a very comprehensive package that was in line with what was offered in Liverpool and Lancashire.

“It was the mayor’s pride that got in the way of a deal."

“I think the council leaders would have taken £60m in Manchester, but it was the Mayor’s personal inflexibility that got in the way.”

After Mr Burnham blew up the talks over a £5million difference, Housing Secretary Robert Jenrick blasted him for refusing to accept a deal.

He said this afternoon: "I’m disappointed that despite recognising the gravity of the situation, the Mayor of Greater Manchester has been unwilling to take the action that is required to get the spread of the virus under control in Greater Manchester and reach an agreement with the government.

"I have therefore advised the Prime Minister that these discussions have concluded without an agreement."

Mr Burnham and other local leaders are expected to hold a press conference at 4pm this afternoon.

After walking away from the £60million financial package, it is unclear how much extra help Manchester will get.

It means Manchester is expected to be given a minimum of 28 days of tough restrictions, with pubs and bars closing unless they serve food.

And other shops including casinos, betting shops and soft play areas will be shut too.

The Government is required to review measures every four weeks and they could be extended for longer.

The PM and Manchester Mayor held a last-minute phone call this lunchtime to try and break the deadlock and seal a deal in order for the city to go into the highest level of restrictions.

No10 said they were looking at how to bridge the gap but that £22million was a starting point – at around £8 a head for "contact tracing, compliance and enforcement".

A spokesperson said: "What we have been looking at in addition to that is significant packages of support for the local economy.

"You can see that is something we have been in discussions with leaders in Greater Manchester about."

Earlier Mr Burnham finally admitted he would accept the higher lockdown – despite case numbers falling in parts of the city.

The Mayor said he would ask people to obey the law if he was ordered into the next set of restrictions – and warned tier three rules are coming for everyone this winter.

This is despite the latest figures showing Manchester, Trafford and Stockport showing a decline in their weekly figures – down 17 per cent, six per cent and six per cent for the week ending October 15.

Other parts of the area – with a total of 2.8million people – have seen rising cases, however.

Rochdale has seen a sharp 17 per cent rise, followed by Wigan with 13 per cent in the last week.

Labour leader Sir Keir Starmer claimed the collapse in talks was a "Government failure", despite Mr Burnham refusing to move over £5million.

Sir Keir said: “Labour recognise the need for stricter public health restrictions. However, that must be accompanied by extra financial support.

“Labour will continue to support Andy Burnham in the fight for people’s jobs, lives and livelihoods.”

This morning Mr Burnham stressed he would accept the decision if he had to, but he was still fighting for extra cash help for businesses – and warned of a mental health crisis on the cards.

He told BBC News: "We would ask people to obey the law, we are quite clear about that…. [but] I can’t just accept more and more and more restrictions, that causes health harm in a different way.

"We will say to people you have to obey the law of the land."

But he warned that imposing new rules without his backing may not win the support of the public.

Mr Burnham claimed he was fighting for a financial deal not just for Manchester but for the whole country, as "I would predict that all areas will end up in tier 3 throughout the winter".

He has also argued that a new shielding system should be used instead for the mots vulnerable – before going for more additional restrictions for the whole area.

Meanwhile, local MPs – including Tories were furious with the discussions with the Government.

William Wragg failed to hide his anger on Twitter earlier.

He said: "The sense of failure is overwhelming. I shall avoid political comment until I have heard @MattHancock’s statement in @HouseofCommons this evening.

"Leadership is required from everybody. Trust is placed in us all and that is the privilege of public office."

She wrote on Twitter: "Just for some context, the money the Treasury recently clawed back from GM in business cash grants from March/April lockdown stands at £88 million.

"So Government TOOK BACK £88m in Covid business support but now won't give less than this to support GM businesses now."

She claimed the Government "clearly doesn't really care about supporting businesses and protecting jobs AND protecting health because they are prepared to cause huge breakdown over £5m (a tiny fraction of what they've spent elsewhere)".

"This is politics at its worst, not public health."

Labour's Andrew Gwynne said today: "Why does this government hate Greater Manchester?" accusing ministers of offering less than they did to their own areas.

But Rishi Sunak hit back, saying MPs need to act in a "constructive spirit".

He vowed: "Greater Manchester is being treated exactly the same as every part of our UK. These are national support schemes."

Up to 1,809 pubs in Greater Manchester could be forced to close following the Government's decision to impose Tier 3 restrictions on the area, according to new data from property adviser Altus Group.

The Manchester Mayor and Westminster Government have been locked in a furious fight for days over extra new rules for the area.

Mr Burnham said he thought shielding of elderly and vulnerable people in Greater Manchester needed to be "looked at seriously" and suggested it was "part of the solution".

Business minister Nadhim Zahawi told BBC Radio 4's Today programme today a deal needed to be struck or hospitals could be at risk.

He said: "We have been negotiating in good faith for 10 days with Andy Burnham and other local leaders in Greater Manchester.

"By the first week of November, if the trajectory continues at the rate it is at the moment, they will run out of ICU capacity in Greater Manchester.

"That is something we should both focus on, set politics aside."

Yesterday Health Secretary Matt Hancock warned swathes of South and West Yorkshire — including Sheffield and Leeds — could be placed in Tier 3 this week.

Chunks of the North East and Nottinghamshire were put on a similar timetable.

It means that than 21million Brits are set to fall under tougher lockdown rules within weeks.

A third of the country faces the highest Tier 3 restrictions or “circuit-breaker” closures.

That is on top of 2.7million already in Tier 3 in Merseyside and Lancashire, along with 3.4million people in Scotland and 1.9million in Northern Ireland.

Despite pressure to introduce an England circuit breaker, Downing Street insisted it would persist with a localised approach.

A spokesman for Boris Johnson said: “We keep all of our measures under review but the PM has made very clear that he doesn’t want a return to something like a national lockdown and believes our three-tiered approach is the right way forward.”

But the leader of Hartlepool Borough Council had a forthright message for anyone suggesting the town should be placed in Tier 3.

Shane Moore tweeted on Monday evening: "Apparently it was announced in the House of Commons earlier that there were talks happening in relation to #Hartlepool & wider #TeesValley going into Tier 3.

"No talks with us since update on Friday & if anyone suggests it to me this week they'll be told to sod off."