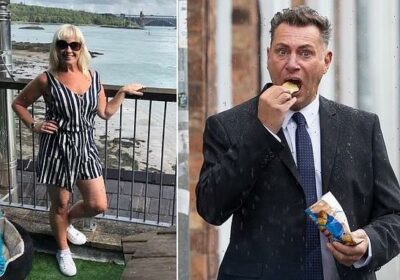 Miserly boyfriend, 55, who forced his partner, 54, to count every log in their firewood stash, rationed dishwasher tablets and banned her from buying gifts for her grandchildren faces jail for coercive behaviour and assault

A penny-pinching boyfriend who made his downtrodden partner count their stash of firewood, rationed their dishwasher tablets and even banned her from buying gifts for her grandchildren is today facing prison for domestic abuse.

Shift worker Michael Marsh, 55, had inherited a substantial estate from his late mother but became so ‘obsessed’ with saving money and building a pension pot, he refused to share any cash with his live-in-girlfriend Aileen Till.

Miserly Marsh ordered Miss Till, 54, to get up at night and check there were no logs missing from their outside their shed and she was only ever allowed access to one dishwasher tablet at a time, pots and pans as he believed she was giving them away.

The victim, a business manageress would also wrongly claim she had been treated to lunch whenever she met her daughter to avoid him rebuking her for spending money.

When Miss Till stood up to Marsh he made her sleep on the storm porch outside their home when it was raining.

She was subsequently evicted from the £300,000 property she shared with him in Warrington, Cheshire after a violent bust up. 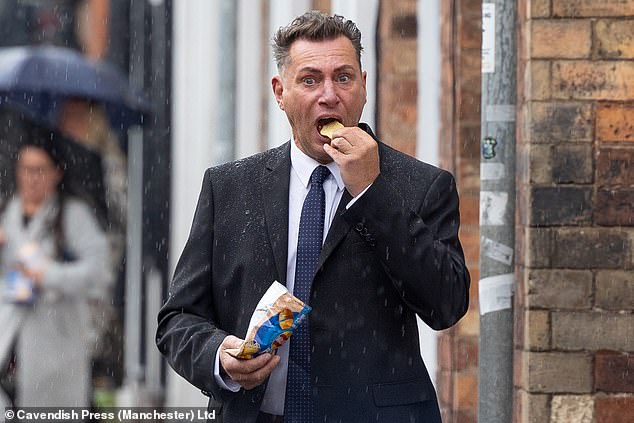 Shift worker Michael Marsh (pictured outside Chester Magistrates’ Court), 55, was so ‘obsessed’ with saving money and building a pension pot, he refused to share any cash with his live-in-girlfriend Aileen Till 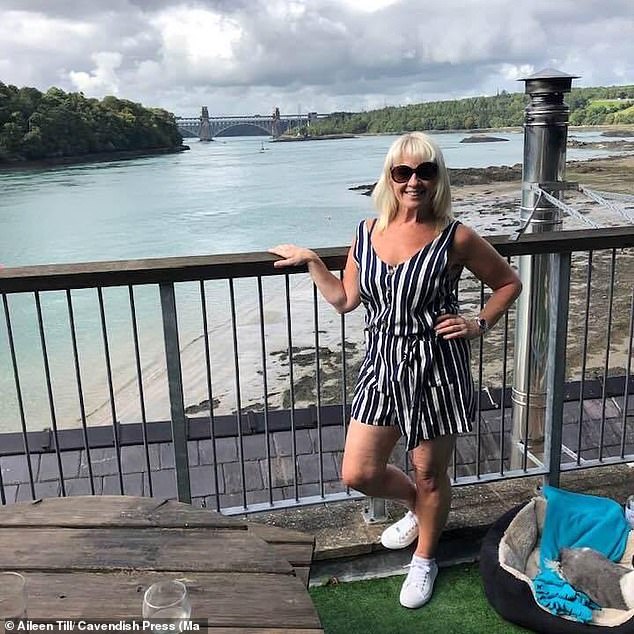 ‘He did not share any of the money and would spend it on car registrations – he was completely obsessed with them,’ business manager Miss Till (pictured), 55, told Chester Magistrates’ Court as she broke down in tears 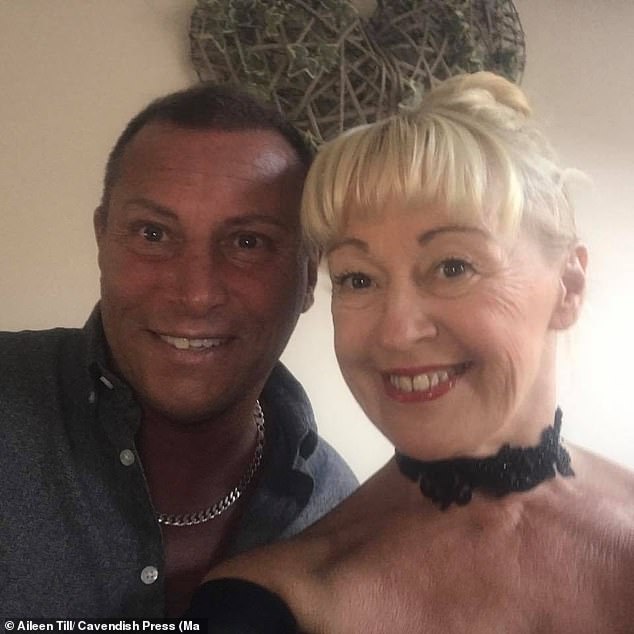 Marsh (left) had inherited a substantial estate from his late mother

At Chester magistrates court Marsh was convicted coercive behaviour and assault following a trial. He will be sentenced later.

The court heard he had inherited a large amount of cash from his late mother in 2019 but was so focused on money he would claim even the homeless should have savings.

During their 15 year relationship he had bought a home for him and Miss Till in cash and took out a £50,000 loan for renovation work which she helped pay towards by standing order.

But Miss Till a senior customer relations manager for an energy company, broke down in tears as she told the hearing: ‘He did not share any of the money and would spend it on car registrations – he was completely obsessed with them.

‘During that time he got obsessed that our neighbour was stealing our logs which we have for a log burner. He made me count them because he thought they were going missing.

‘He helped me to get up at night and count the logs – I was so embarrassed. It was the early hours of the morning. He thought he had heard our neighbour climbing the six foot fence to steal logs.

‘I did not want the neighbour to know that is what he was thinking. Then there were the dishwasher tablets. Every time I went to put the dishwasher on I thought I was going mad as there was only one in the bag. I could not understand it as I had been shopping.

‘I said we needed to buy more. But he said that I was selling them to my daughter so, I was only allowed to have one dishwasher tablet at the time.’

Miss Till said Marsh was so ‘obsessed’ with money he would not allow her to spend any cash on her daughter or grandchildren, aged six and eight, or buy her friends gifts.

Though she had her own bank account and savings, he said that all their spare money should go ‘into the pot’ towards a retirement-type home they were hoping to buy on the island Anglesey in North Wales.

‘He would not have allowed me to give financial assistance so I would go and meet my daughter when he was on shift so that he did not know,’ she said.

‘If I did tell him I had met her, I would say that she bought me lunch or breakfast. I was worried that he would think I’d spend money on her. He said I was not allowed to give her money. I had to put it in the pot towards Anglesey.’

Miss Till said she would not bring her family around as ‘it wasn’t worth it’ and added. ‘I could not tell my daughter that he hated kids.’

During an online Teams meeting conducted by Miss Till, Marsh was observed making 15 cups of coffee without offering her one. He also screamed and shouted at her when she did some voluntary work to help homeless people at Christmas time.

‘It was embarrassing and I could not do anything right,’ she said. ‘He does not understand that there are people who are not as fortunate as him. He would say that homeless people should have savings. There was no further voluntary work after that.

‘After a friend visited the conversation with him would be: “Why is she coming? What are you giving her? She must have come here for something.” It made me feel alone. I was struggling and not able to talk to anyone. I would avoid her coming to the property and I would not tell him I was meeting her,’ she told the court. 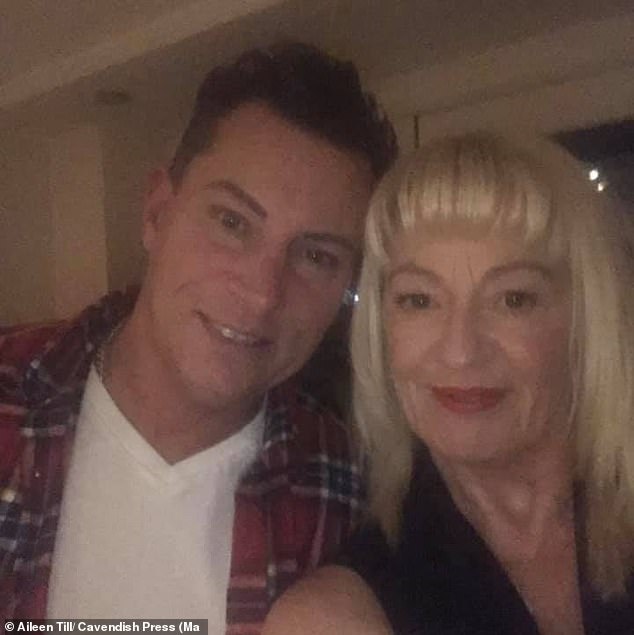 ‘I have been left broken’: Marsh told Miss TIll that she was not allowed to see her brother after he sadly lost his daughter as he was ‘not his [Marsh’s] type of people’ 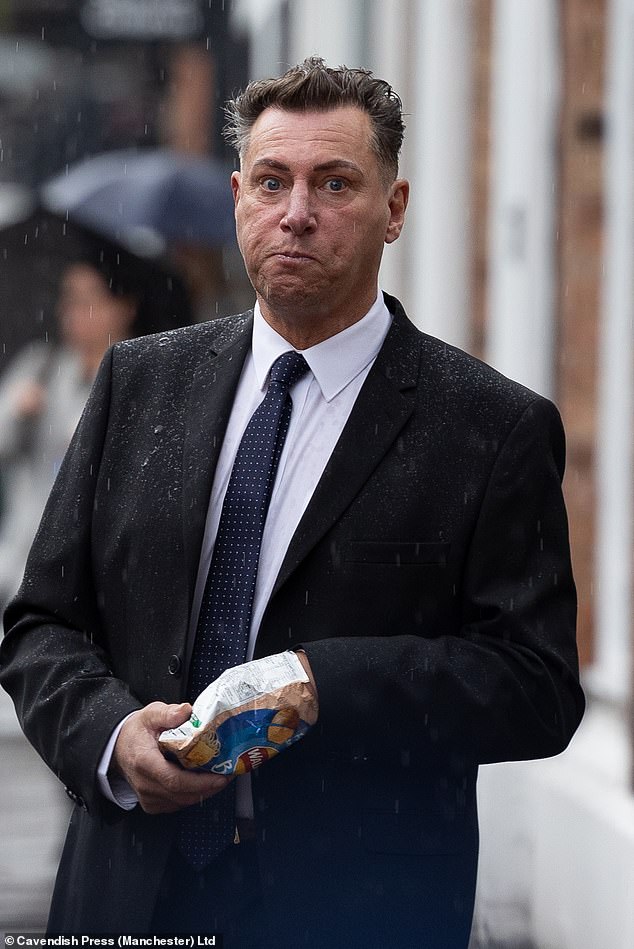 ‘He [Marsh] would not have allowed me to give financial assistance so I would go and meet my daughter when he was on shift so that he did not know,’ Miss Till said said. 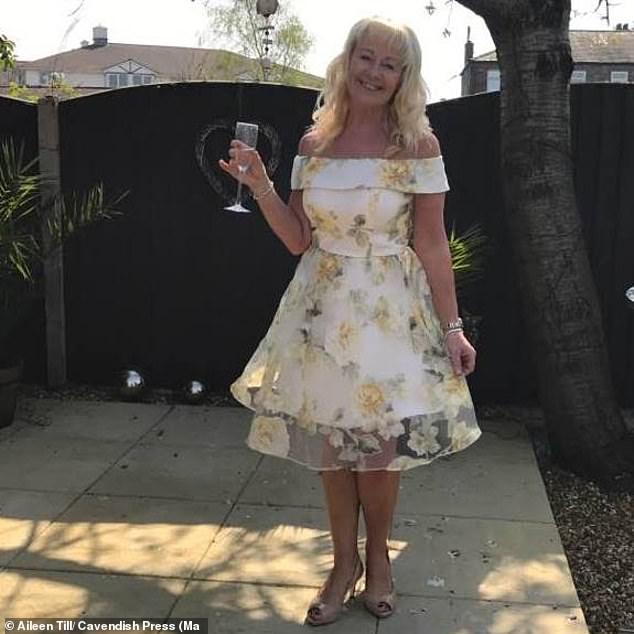 ‘He said “Get out of my house. You are a tenant” and I had nowhere to go. He told me he wanted to see me homeless’ Miss Till told the court

‘My brother had just lost his daughter and I wanted to support him so I invited him and my sister in law round for dinner but it was awful and they left early. I was told that I was not allowed to see them because they were “not his type of people”. I tried to say that it was my house too but he said it was his house and he can make that rule.

‘Prior to January 2020, when the relationship deteriorated, I was quite strong. I had a responsible job. I managed a team. I was well respected. Everybody would say how much of a nice person I was and I was in charge of my own life.

‘At home it was becoming more and more challenging to me. I knew that I needed to leave. I cooked, I cleaned, I did everything. I could not understand why he suddenly hated me so much.

‘Eventually I told him I was going to tell friends and family and that is when he tried to ruin me. He said “Get out of my house. You are a tenant” and I had nowhere to go. He told me he wanted to see me homeless. He wanted to be seen with bin bags on the streets. I was sick with worry. I had lost everything.

‘He grabbed me and pushed me on the floor in the hall. He was screaming in my face and my top was ripped. I was in shock.’

Earlier Michael O’Kane prosecuting said: ‘The impact of the defendant’s behaviour has been significant to the complainant’s mental health and has caused her to have a period of leave from work.

‘He locked her out of the property on multiple occasions forcing her to sometimes sleep in the storm porch. This was a humiliating thing to happen. She was caught in the rain as a result of one of those occasions. The defendant was also abusive to the complainant, calling her names and saying she was worthless.’

Marsh denied assault and coercive behaviour claiming Miss Till made up her story after he sent her an eviction notice. Allegations claiming he prevented her from listening to music by removing her stereo system, hiding her car key to prevent her driving for six weeks and preventing her from lighting the log burner were dropped.